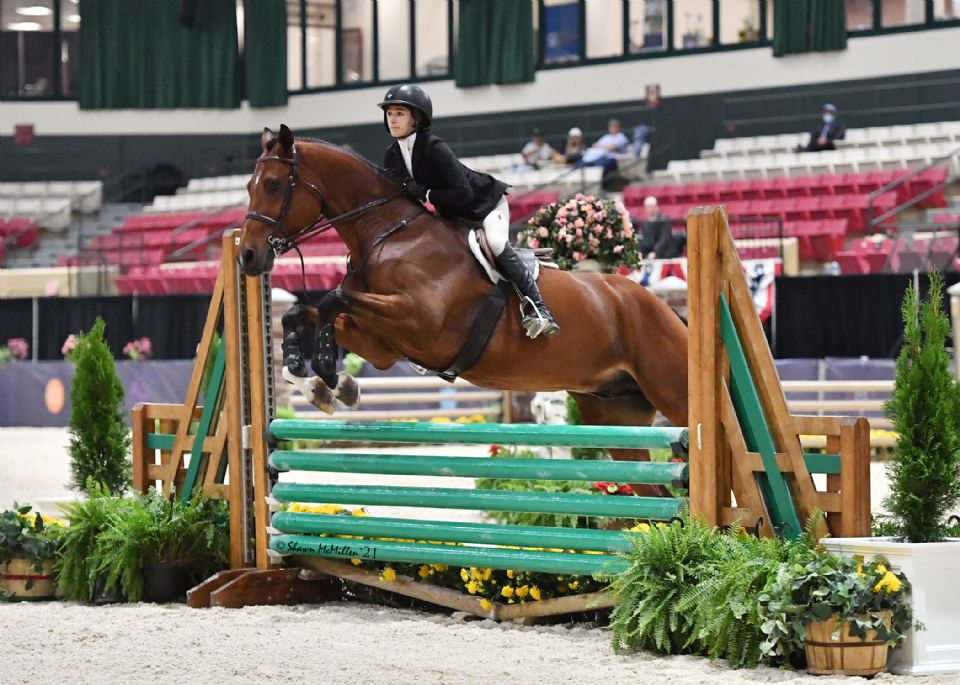 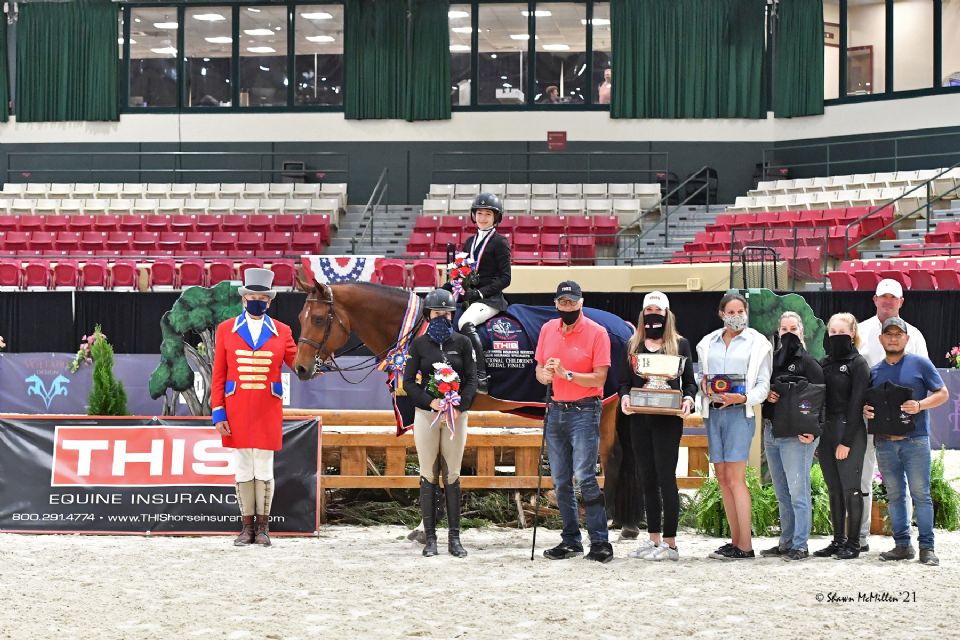 Abigail Gordon was presented as the winner of the Taylor Harris Insurance Services National Children’s Medal (THIS) by THIS President and Director Michael Taylor and Christina Kelly.
Photo by Shawn McMillen Photography 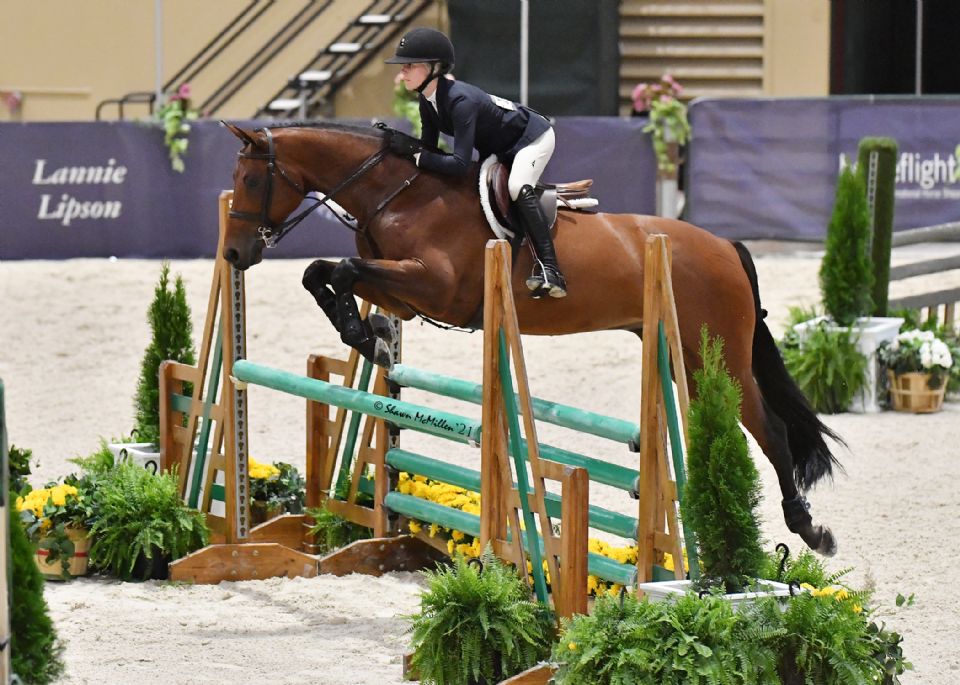 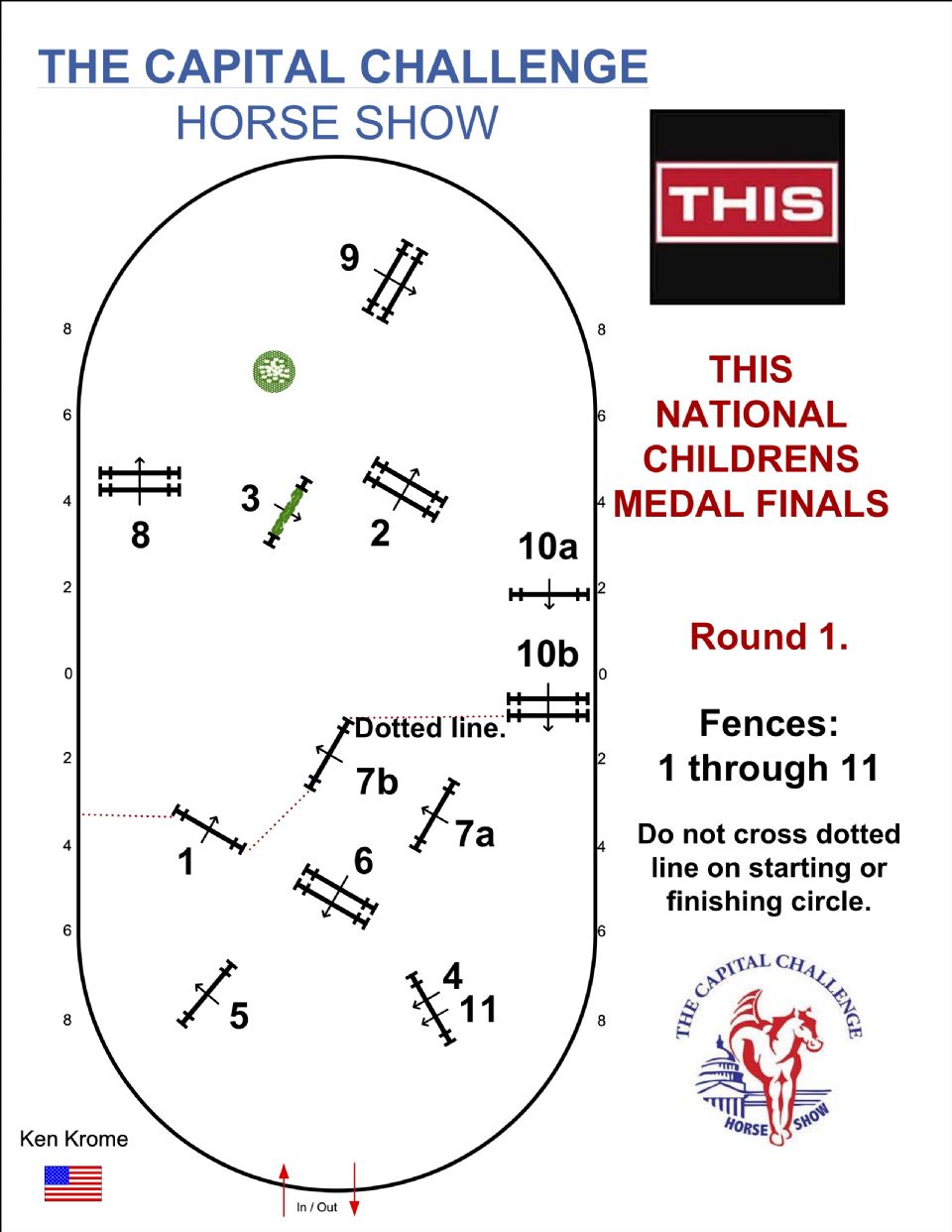 The 2021 THIS National Children's Medal Final Round 1 course map

The Capital Challenge Horse Show continues through October 10, but Sunday’s championship finals marked the conclusion of the show’s Equitation Weekend, presented by Bigeq.com.

A total of 39 juniors, qualifying from across the country, competed in Sunday’s Taylor Harris Insurance Services (THIS) National Children’s Medal Final at Capital Challenge. The top 10 from the first round then returned for a second round.

After the second round, because Olivia Sweetnam of Wellington, FL, sat within two points of Gordon, and Catherine Kramer of Carmel, IN, was just a fraction of a point behind Sweetnam, the three competitors were brought back for a final test that included a counter canter, trot fence, and hand gallop. In the end, Gordon prevailed with a third-round score of 83.66 putting her at the top with a score of 258.73 overall.

“I got more confidence out of this,” Gordon said of her win, “but it’s not only about winning; it’s about doing my best. I gave it my all and when you do, it pays off. I’ve worked pretty hard these past couple years since [I started] training with Ashland Farms, and I’ve been trusting the process ever since. This [medal final] was my goal all year and it paid off, so I was really, really happy about it.”

Gordon talked about putting in the hard work, and also mentioned the importance of maintaining a positive mindset. “I always look at the bright side. Even if I won or not, I look at what went well,” she shared. “That will always guide you to bigger and better things.”

Because she says she’s an overthinker, Gordon credits a unique tactic for overcoming the challenge it creates in the ring. “It’s all Pinterest; I read those quotes!” Gordon laughed. “I do those affirmations [that I find on Pinterest] before I go into the ring. I’m [say things] like, ‘I’m attracting positive, healthy vibrations into my body!’ and then it works. I’m telling you, download [the affirmations]!”

Gordon was aboard Mary Jane King’s Heartbeat Z, a horse that was first her older sister’s (Libbie Gordon) equitation mount before going out on lease and then returning to the Gordon family because they adored him. “He is so sweet, and he would never hurt a fly,” she said of the horse known as ‘Happy’ in the barn. “He always tries his best. If he knows that his rider trusts him, he will trust his rider. He is very, very brave, and he also gives pretty good snuggles!”

“He is pretty spoiled in the barn,” she continued of Happy. “Right now, I’m giving him pumpkin-spiced treats and [it’s been his favorite treat so far] so I guess he’s a pumpkin spice man! I might need to buy him a latte at Starbucks. He needs the reward [following our win] so he will get a lot of kisses and hugs after this.”

While Sunday marked the conclusion of Equitation Weekend, presented by Bigeq.com, competition at the 2021 Capital Challenge Horse Show continues on Monday, October 4, with the professional hunter divisions beginning at 7:30 a.m.

Note: In Sunday’s Taylor Harris Insurance Services National Children’s Medal Final, there was a change to the previously announced standings for the top 10 that would return for the second round. After the first round was complete, and upon further review by the six judges and the stewarding team of Capital Challenge Horse Show, it was found that three riders that scored in the top 10 crossed the dotted line in their closing circles. On the course map, the dotted line at the beginning and end of the course is clearly marked, and in the arena, they are lined by plants.

The three riders who crossed the dotted line were eliminated from the class per the regulations set out by the horse show prize list and federation rules. The next three riders in the standings who did not cross the dotted line in their first-round course were moved into the top 10 and returned for the second-round test.

Following the opening round of the PBIA North American Junior Equitation Championship, a field of 133 junior riders was narrowed to the top 20 competitors, who returned in reverse order of their standings for a second round.

With the first round high score of 92, Debney was the final rider to return for the second course, where she held the lead, earning a score of 94.66 for an overall winning score of 186.66.

Second place with an overall score of 183 went to Riley Hogan of Warrenton, VA, riding Wengen, owned by Don Stewart. Audrey Schulze of Ridgewood, NJ, rounded out the top three with a score of 178.24 on Castellan W, owned by Riverbrook Sport Horses LLC.

“I definitely felt a lot of pressure going in because Riley [Hogan] laid it down. She had a beautiful round, so I definitely had to go in there and do my best,” said Debney of heading into the second round in the top spot. “I have so much confidence in the horse, so I knew after the first jump that I could take a breath.”

Though Debney took a breath, she remained poised to take on an unexpected challenge in the second round and held onto her lead in more ways than one. “[Quimby] landed [on the left lead] instead of the right [lead] after the second jump, so I had to hold the counter lead [in a bending line to fence three],” she explained. “I was happy with how I handled that. I thought he settled in, and it was good he didn’t get nervous because sometimes he can.”

Debney is no stranger when it comes to victory gallops and is glad to have started the equitation finals season on a high note with this championship.

“I thought the course was really, really well designed today,” said Debney of the course designed by Ken Krome. “The first round was hard enough, and this class really prepares everyone for [Dover Saddlery/USEF Hunt Seat] Medal Finals, [ASPCA Maclay Championship], and [Washington International Horse Show Equitation Finals], so I thought it was great.”

Though Debney is a serious competitor, she credits her partner of three years, Quimby, owned by Debney’s Temple Equestrian LLC, for enjoying the experience no matter the result. “I’m definitely having a lot of fun out there with him,” she shared. “It’s great because I think he is so much fun and he is always looking to do his best. Even if we don’t have the greatest round, I know that we at least both had a good time!”

The EMO Equitation Trip of the Show, sponsored by EMO Insurance and presented to the rider with the highest scoring equitation round in the age group equitation division, went to Dominic Gibbs of Colorado Springs, CO, who earned a score of 93 in the 17-Year-Old Equitation.

The Glena Wirtenan Sportsmanship Trophy was also awarded on Sunday to McKenzie Fitch of Collegeville, PA. This inaugural honor is given to a junior Equitation Weekend competitor, selected by the stewards and schooling supervisors, that exemplifies qualities of a true horseperson, sportsmanship, horsemanship, and turnout of both horse and rider.