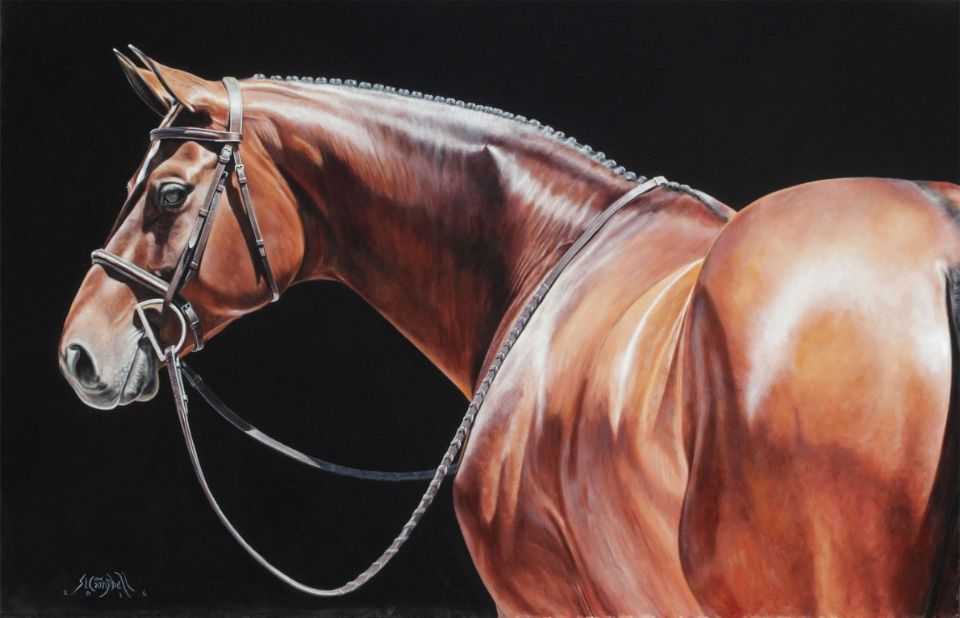 Sharon Lynn Campbell’s portrait ‘Beautiful Bay. “I was doing a photo shoot for the classic head/neck portrait for a client, and as they were walking him away, I saw him stop and strike this pose. I held on to the photo for a few years knowing that I wanted to paint it for a special occasion. That occasion came when I was asked by the USET Foundation to participate in the 2016 Rockin’ Rio Olympic fundraiser.”
Artwork by Sharon Lynn Campbell

The artwork of Sharon Lynn Campbell has appeared at many of the country’s most prestigious horse shows, including the 2016 Capital Challenge Horse Show. As the newly named official artist of the Capital Challenge Horse Show, Campbell is masterfully creating two paintings for the 2016 edition of the horse show, to be held October 1-9 at the Prince George’s Equestrian Center in Upper Marlboro, MD.

The Rochelle, VA, based artist’s work will appear on the cover of the horse show prize list and on the annual Capital Challenge commemorative poster. Both paintings will be unveiled in August alongside the release of the official prize list.

As the winner of the $25,000 World Champion Hunter Rider (WCHR) Professional Challenge and the 2015 $5,000 WCHR Professional Finals at the 2015 Capital Challenge Horse Show, Scott Stewart was selected as the rider to grace both the prize list and poster painting on the horse of his choosing.

“I met with Scott to see which horse he would like to put on the cover, and he choose the Gochmans’ beautiful grey gelding Catch Me,” Campbell said, referencing the mount on which Stewart earned the 2015 $25,000 WCHR Professional Challenge victory. Campbell has now beautifully recreated a photo of the gelding, captured by James Parker, for the prize list cover.

For Campbell, the opportunity to paint horses like Catch Me for the Capital Challenge Horse Show is an incredible honor.

“I just really love this horse show,” Campbell said of Capital Challenge. “It’s the perfect transition from the outdoors to the indoors, and I have the opportunity to catch up with my West Coast clients and meet new people from all over the country. It’s always a great group of people that come to show. The management for the show are wonderful people, and it’s a pleasure to work with them.”

Campbell is a lifelong horsewoman, having grown up riding, showing, training, and even shoeing horses at her family’s horse farm in Indiana. Her equestrian knowledge and great understanding of the horse’s conformation and expression is evident in each piece of artwork that she creates. To learn more about Sharon Campbell, visit www.sharoncampbell.com.