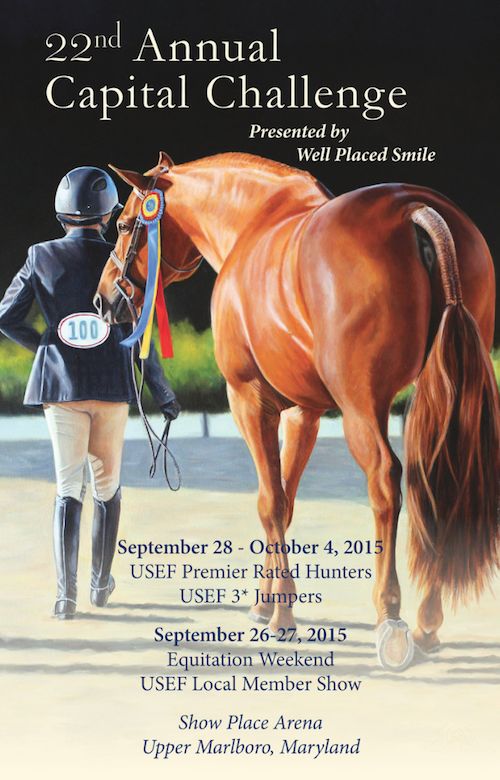 The Capital Challenge Horse Show serves as a championship destination for many of the world's best hunter, jumper, and equitation riders culminating with a series of national final and challenge classes. The highlight $25,000 WCHR Professional Challenge will be held during the evening portion of competition in Show Place Arena on Wednesday, September 30, beginning at 7pm, while the Private Tutorting Services North American Junior Equitation Championships, North American Adult Amateur Equitation Championships, as well as the Taylor Harris Insurance Services Children's National Medal Finals, will take place during Equitation Weekend presented by BigEq.com (September 26-27).

"We are looking forward to hosting another great year of the Capital Challenge Horse Show at Prince George's Equestrian Center. It is a one-of-a-kind competition in North America that draws the best riders of all ages to compete in many of the major final and challenge classes offered in the U.S.," said Oliver Kennedy, CCHS Show Manager. "We have a spectacular group of sponsors and supporters that are the driving force behind the success of this show and we couldn't thank them enough for their involvement."

CCHS will also host the Future Hunter Division, offering $45,000 in prize money throughout the six classes composing the division, concluding with the $25,000 Future Hunter North American Championships on Wednesday, September 30.

"The Future Hunter Division is a very unique aspect of the CCHS competition, as it allows a variety of riders to showcase the talents of their up-and-coming hunters on a national stage," said Billy Glass, who serves as a CCHS Show Manager alongside Oliver Kennedy. "We've added new opportuntities within the division and hope to see the next generation of our country's top hunters this September."

A complete time schedule for the 2015 competition and the 2015 Capital Challenge Horse Show Prize List are available online at www.capitalchallenge.org.