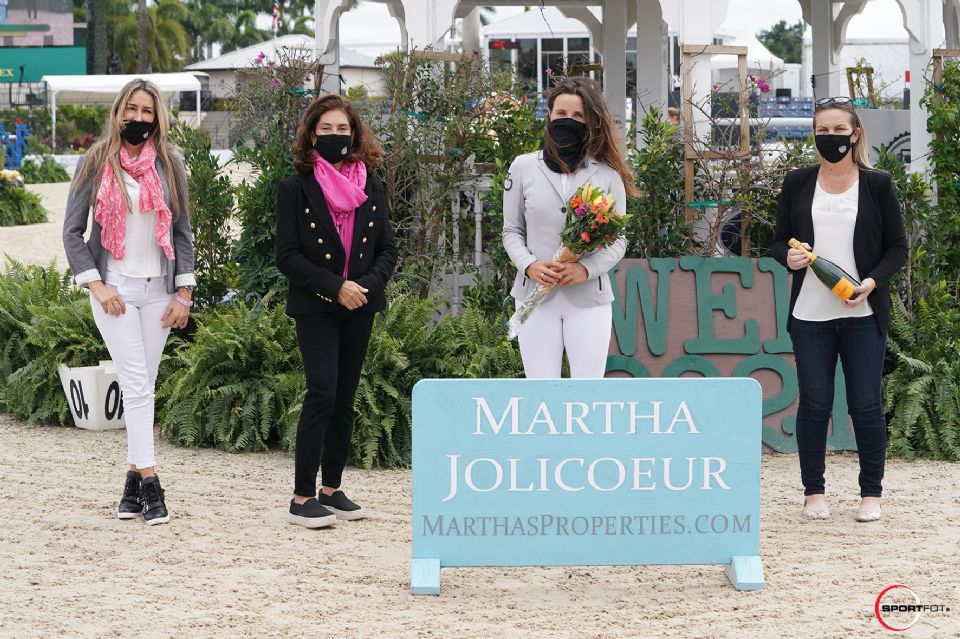 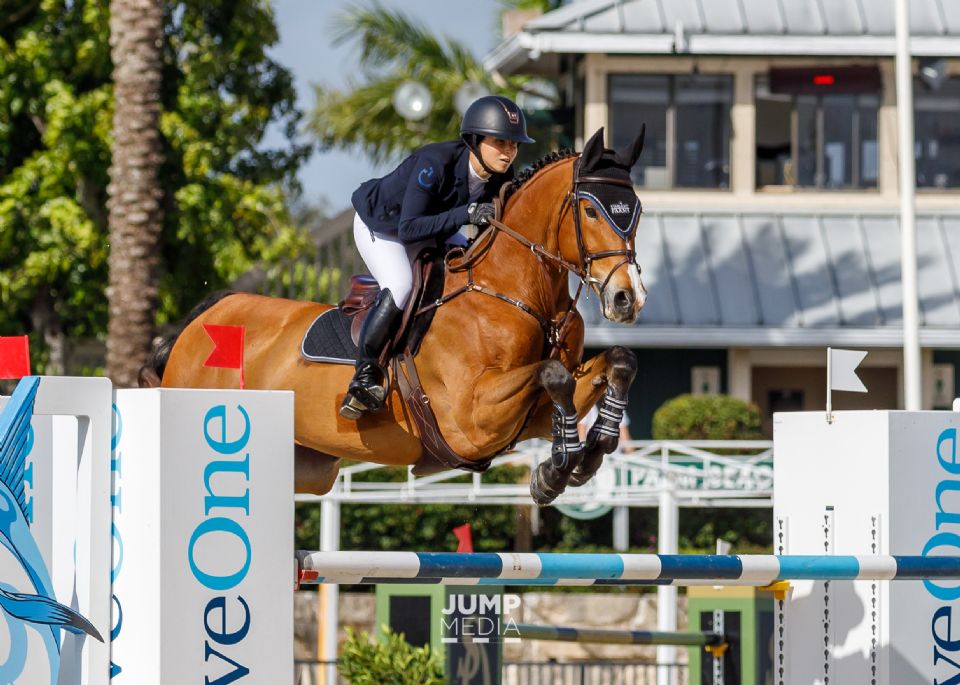 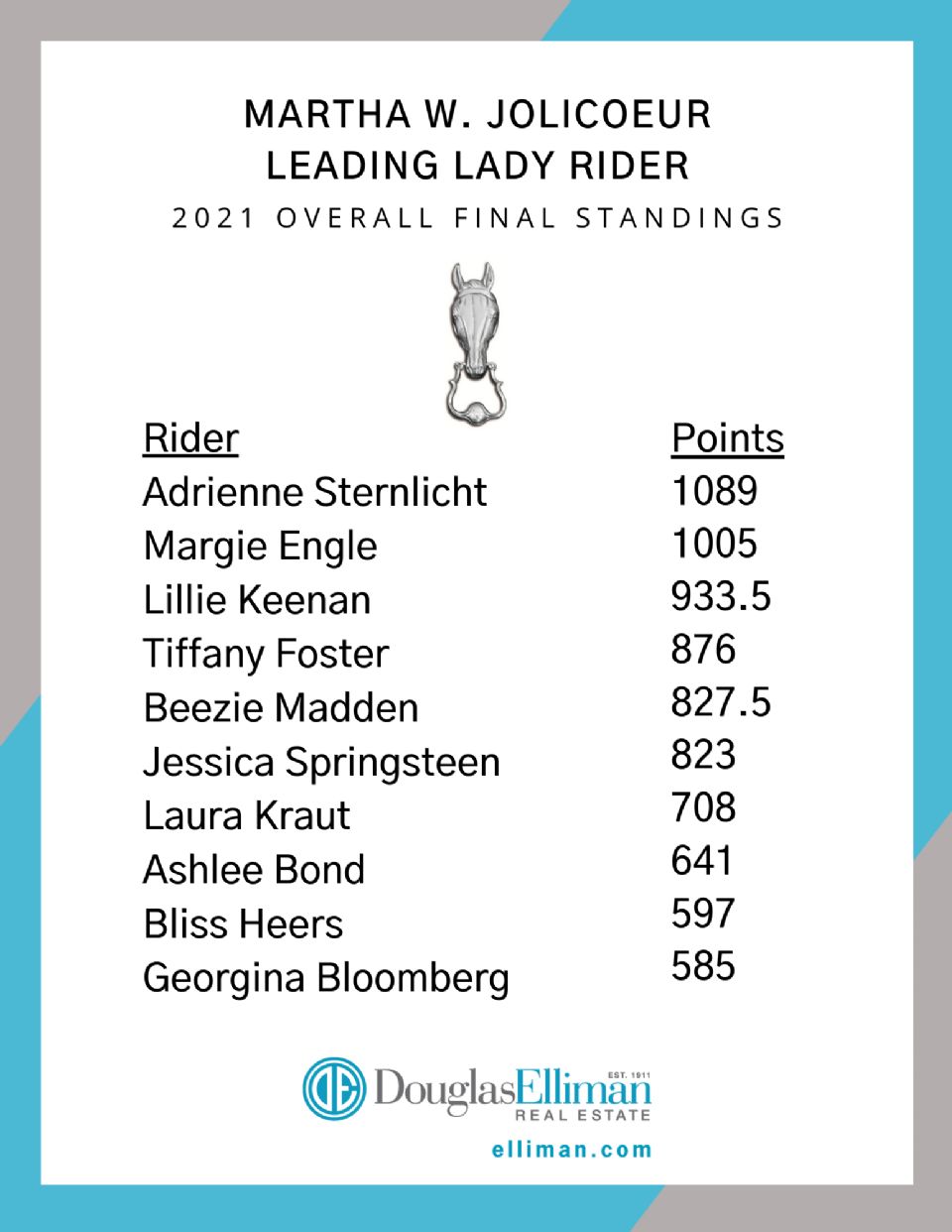 The Martha Jolicoeur Leading Lady Rider Award, given in memory of fellow realtor and horsewoman Dale Lawler, was presented weekly during WEF to the high-score female rider based on performances in that week’s WEF Challenge Cup and featured grand prix event.  Consistent throughout the 12 weeks of competition, Sternlicht claimed the weekly Martha Jolicoeur Leading Lady title during weeks one, nine, and 10.  At the end of the WEF circuit, Strenlicht had amassed a total of 1,089 points, putting her at the top of the leaderboard ahead of U.S. Olympian Margie Engle who was the runner-up with 1,005 points.

“To win overall Leading Lady is testament to a consistent circuit, great horses, and a great team, and I’m really fortunate to have all three of those,” said Sternlicht, 27, who was a member of the U.S. gold medal team at the 2018 FEI World Equestrian Games.  “I am grateful to have had a consistent circuit, as well as a great group of horses and people behind me.  The WEF circuit is definitely a grind, so to be able to show up week after week with consistent performances is incredibly meaningful to me.

“I really want to thank Martha for sponsoring this award,” continued Sternlicht.  “It’s an extra incentive that we have as female riders every week.  I won the award for the first time last year and it was a very special feeling to be recognized, so the overall title was something I had my eye on this winter.”

In recognition of her achievement, Sternlicht was presented with flowers and champagne by Jolicoeur, joined by her fellow realtors, Sharon Loayza and Waverly Ernst. Sternlicht will also receive a custom-built jump of her choice from Jolicoeur.

“I wanted to sponsor the Leading Lady Rider Award initially because it was so special to me when I won it during my time as a rider,” said Jolicoeur, who began presenting the award in 2010 as a way of recognizing female accomplishments in one of the few Olympic sports where men and women compete as equals.  “Now that it’s given over a 12-week circuit, it’s even more meaningful because it rewards a rider’s consistency throughout each week and throughout the season, making the overall title even more of an accomplishment.  I love that somebody can be honored for winning the award during a particular week, but the overall winner is generally the most consistent rider throughout the circuit.

“Adrienne has been so consistent over the past 12 weeks and also over the past few years,” continued Jolicoeur, who enjoyed a successful international show jumping career before becoming Florida’s number one Douglas Elliman real estate broker.  “It shows a lot of strength, talent, and adaptability to be the Overall Leading Lady Rider in a competition steeped with so many talented female riders.  It’s been a pleasure to watch her this season.  She’s ridden incredibly well and it’s quite an accomplishment.”

In addition to presenting the Leading Lady Rider Award, Jolicoeur was also the title sponsor of the Low Amateur-Owner Jumper division throughout the Winter Equestrian Festival.  The Circuit Championship was awarded to Caelinn Leahy of Maple Park, IL, riding Zarkava.

Jolicoeur has been serving the Wellington equestrian community full-time since 2005 and specializes in both residential and farm properties.  As part of the elite Douglas Elliman Real Estate Sports and Entertainment division, she offers a wide range of property listings that fit an equestrian lifestyle and beyond.  To learn more about Martha W. Jolicoeur, visit www.marthasproperties.com and follow her on Facebook and Instagram for a behind-the-scenes look at her available Wellington properties.

Buying or selling a property with Martha Jolicoeur assures the highest level of professional real estate consultation in the Wellington equestrian community. Jolicoeur understands the importance of customer excellence and prides herself on dealing honestly and fairly while creating relationships with her customers that continue far beyond a business transaction. For more information on Martha Jolicoeur and her listings, visit www.marthasproperties.com or find her on Facebook and Instagram.