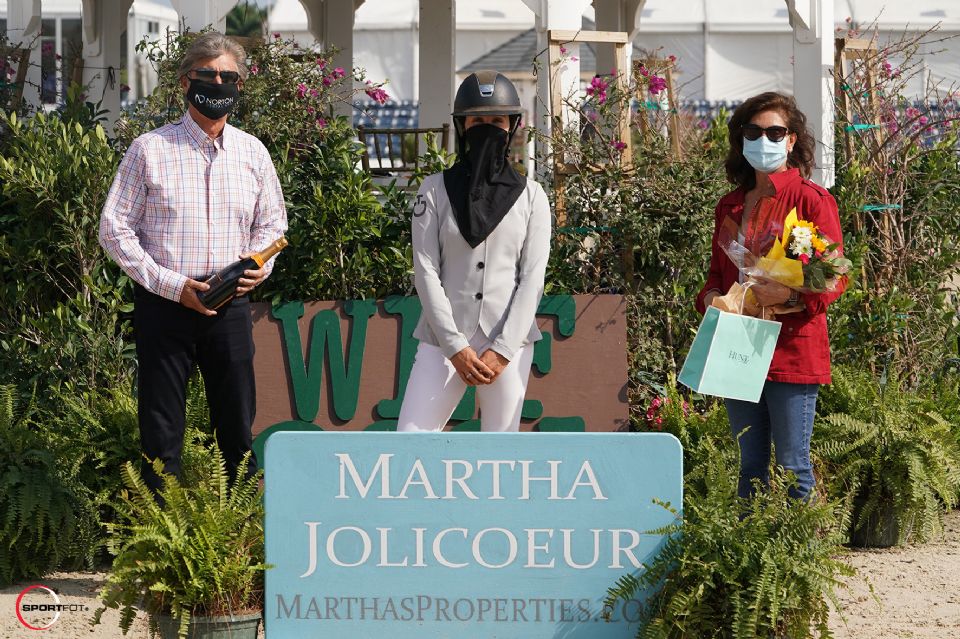 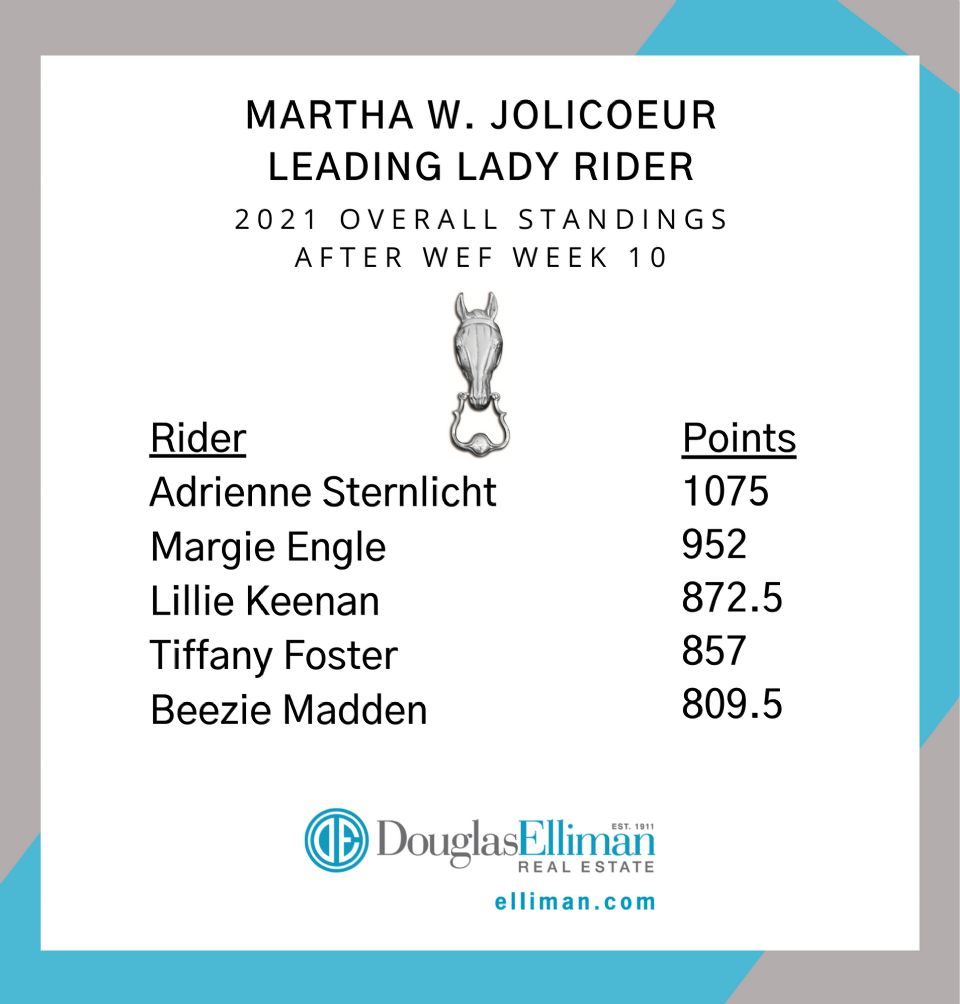 Having claimed the award during WEF 1 and WEF 9, Sternlicht once again won the Leading Lady Award during week 10 of WEF competition, marking two weeks in a row of securing the title.  Sternlicht accumulated the highest number of points among her fellow female athletes following Friday’s $37,000 Adequan® WEF Challenge Cup Round 10 and a ninth-place finish in Sunday’s $137,000 CSI3* Horsware Ireland Grand Prix.  In both classes, Sternlicht rode Just A Gamble, a 12-year-old Belgian Warmblood mare (Toulon x Corofino) owned by Starlight Farms 1, LLC.

“I really would like to thank Martha for sponsoring this award year after year,” said Sternlicht, 27, of Greenwich, CT.  “It’s something that wasn’t even on my radar a couple of years ago, but as I’ve become more consistent at the top level, it’s become apparent what a privilege it is to win.  It’s an award I’ve always attributed to the top females in the sport, so I can’t thank her enough for giving us that recognition.”

Sternlicht was presented with a bottle of champagne, a bouquet of flowers, and a gift certificate for a shopping spree at Hunt, Ltd. by Martha W. Jolicoeur and her husband, Dr. Stephen Norton, in recognition of earning the Leading Lady title.

“It’s truly the award that I most cherish because consistency in this sport is a long game,” continued Sternlicht.  “I think as a rider, my strength has been in pressure moments, so being able to show up week after week consistently is something that is hugely important to me.

“Every rider dreams of having a moment when their top horses are all in form,” continued Sternlicht, who has won three Leading Lady titles aboard three different horses so far this season.  “My team works incredibly hard to keep my horses at the top level feeling healthy and happy.  I think in the moments when the stars align for me as a rider, I have to take advantage of it.”

A sponsor and dedicated supporter of horse sport at WEF, the 2021 season marks Jolicoeur’s 11th year presenting the Leading Lady Rider Award.  She began presenting the award in 2010 as a way of recognizing female accomplishments in an Olympic sport where men and women compete as equals.  A former competitor herself, Jolicoeur enjoyed a successful international show jumping career before becoming Florida’s number one Douglas Elliman real estate broker.

The Martha Jolicoeur Leading Lady Rider Award, given in memory of fellow realtor and horseman Dale Lawler, is presented weekly to the high-score female rider based on performances in the weekly WEF Challenge Cup series and grand prix events.  During the final week of WEF, the Martha Jolicoeur Overall Leading Lady Rider Award will be presented to the female rider who accumulates the most points throughout the season.  So far this season, Erynn Ballard and Tiffany Foster, both of Canada, and American competitors Lucy Deslauriers, Laura Kraut, Beezie Madden, Adrienne Sternlicht, and Kristen VanderVeen have all claimed the Leading Lady title.

Jolicoeur has been serving the Wellington equestrian community full-time since 2005 and specializes in both residential and farm properties.  As part of the elite Douglas Elliman Real Estate Sports and Entertainment division, she offers a wide range of property listings that fit an equestrian lifestyle and beyond.  To learn more about Martha W. Jolicoeur, visit www.marthasproperties.com and follow her on Facebook and Instagram for a behind-the-scenes look at her available Wellington properties.

Buying or selling a property with Martha Jolicoeur assures the highest level of professional real estate consultation in the Wellington equestrian community. Jolicoeur understands the importance of customer excellence and prides herself on dealing honestly and fairly while creating relationships with her customers that continue far beyond a business transaction. For more information on Martha Jolicoeur and her listings, visit www.marthasproperties.com or find her on Facebook and Instagram.