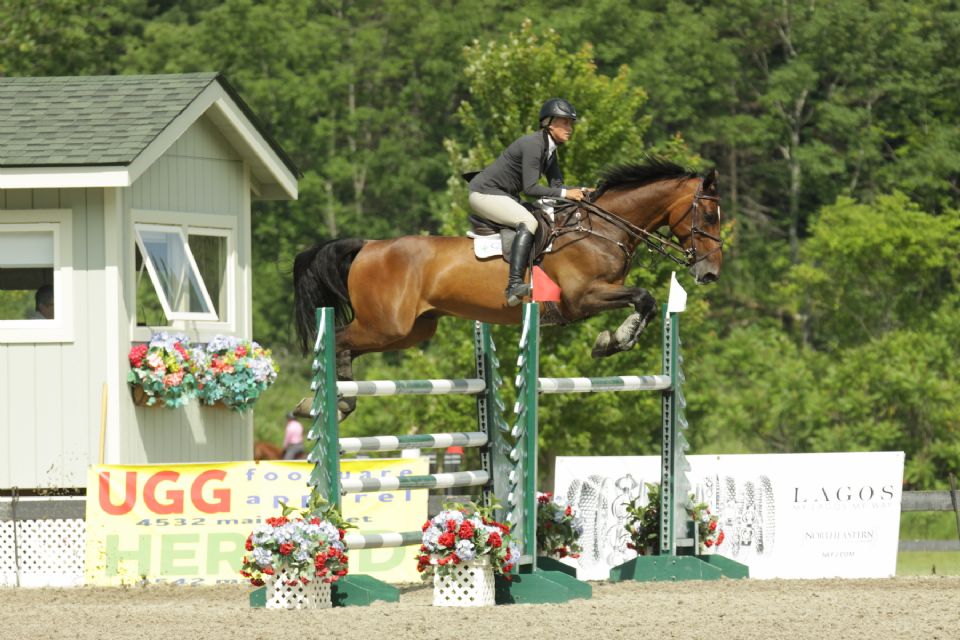 Amanda Flint and Child Z on their way to victory in the $10,000 Brooks Brothers Welcome Stake, presented by Manchester Designer Outlets, on July 9 at the Vermont Summer Festival in East Dorset, VT.
Photo by David Mullinix Photography 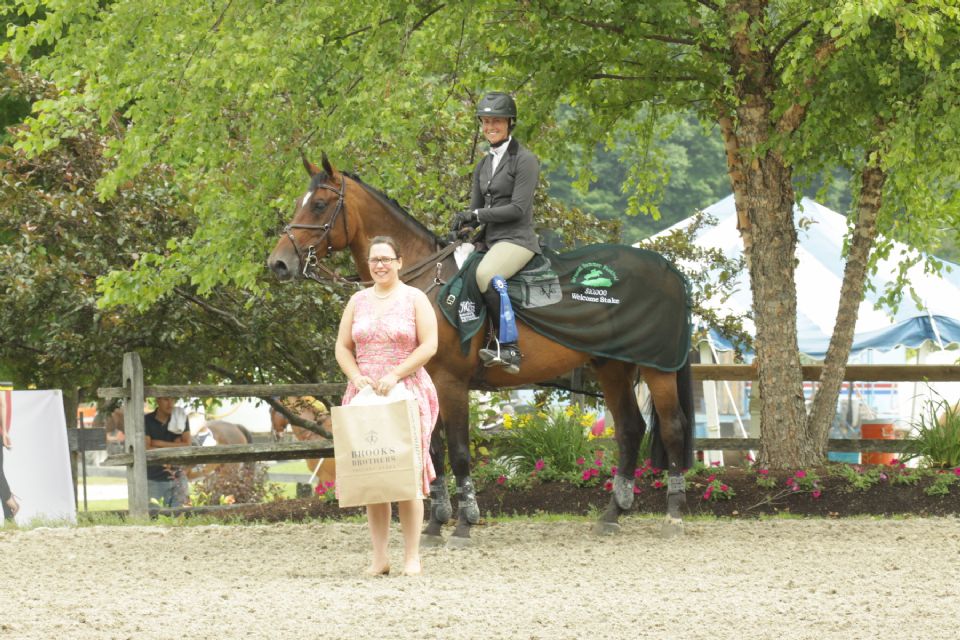 Keeping her recent streak of wins alive, Flint and Child Z rose to the top of a 23-horse field Thursday afternoon. They were the fastest clear against six contenders who remained in the ring for an immediate jump-off. The win marked Flint's third victory in the grand prix ring during the 2015 Vermont Summer Festival season.

Canadian builder Michel Vaillancourt set the tracks for the Welcome Stake, and Flint was impressed with the challenge. “Last week was a really nice, inviting way to get the horses going, but Michel has been getting tougher this week,” said Flint. “He made us ride for it today, which is good.”

The top three placings were decided on the clock with Flint, Diego Vivero of Wellington, FL, and Jimmy Torano of Fort Lauderdale, FL, all jumping double clear. Torano was first to set a time to beat in the jump-up, finishing clear in 45.23 seconds in the irons of his own Daydream. Vivero answered one trip later, posting a time of 40.71 seconds to give him and his own Bandurria Hulmen the red ribbon.

Flint and Child Z, an 11-year-old Warmblood gelding (Chester Z x Virginia), were the final pair to show in the class and saved the best for last. Their tight turns and rollbacks stopped the clock clear in 40.36 seconds for the win.

Amanda Starbuck of Ridgefield, CT, and Starbuck Equestrian's Carte Blanche took fourth as the fastest four-fault trip in 40.74 seconds. Jonathan Corrigan of Southampton, NY, and Noel Love Gross' Aries pulled one rail in the jump-off, crossing the timers in 41.61 seconds for fifth place. Cassandra Orpen of Weston, CT, was first to jump clear in the original order aboard SCCA Ventures' Casis, but faults over the jump-off course and on the clock landed her in sixth place.

“I didn’t really have a plan because I was just hoping for slow and clean, but he was showing me the turns so I thought 'why not',” said Flint of Child Z's effort. “He's so scopey that he can turn on a dime and jump anything. He jumped the in-and-out from nothing.”

While Flint has only been back in the tack of Child Z for a few weeks, she is no stranger to the mount. She imported him from Argentina two years ago before selling him to compete with an Amateur. “He's back with me now to be sold again and he won three ribbons at Princeton, three ribbons last week and already has two this week,” she said. “He's so different than my other rides – he's all slow power. He doesn't want to touch the jumps and is so brave, which is a really good combination.”

Child Z carried Flint to a fifth-place finish in last week's Welcome Stake before jumping to third in Sunday's $30,000 Grand Prix. She is again pointing him toward the big prize this Sunday in the $30,000 Battenkill Grand Prix, sponsored by The Inns at Equinox.

In addition to their share of the prize money, the top three finishers were presented with awards from Manchester Designer Outlets in Manchester, VT. Flint earned a $1,000 gift card from Brooks Brothers, Vivero won a coat from Marimekko, valued at more than $500, for second, and Torano was awarded $100 to Polo Ralph Lauren for third.