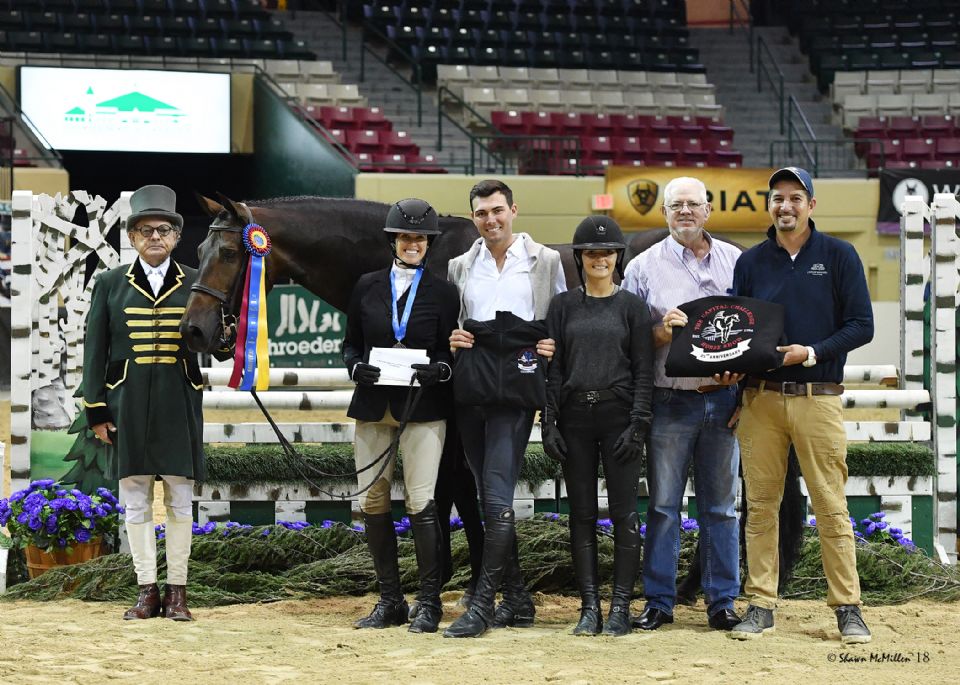 Lindsay Maxwell and Belgravia won the Grand Amateur-Owner 3-3 Hunter Championship for the second year in a row.
Photo by Shawn McMillen Photography 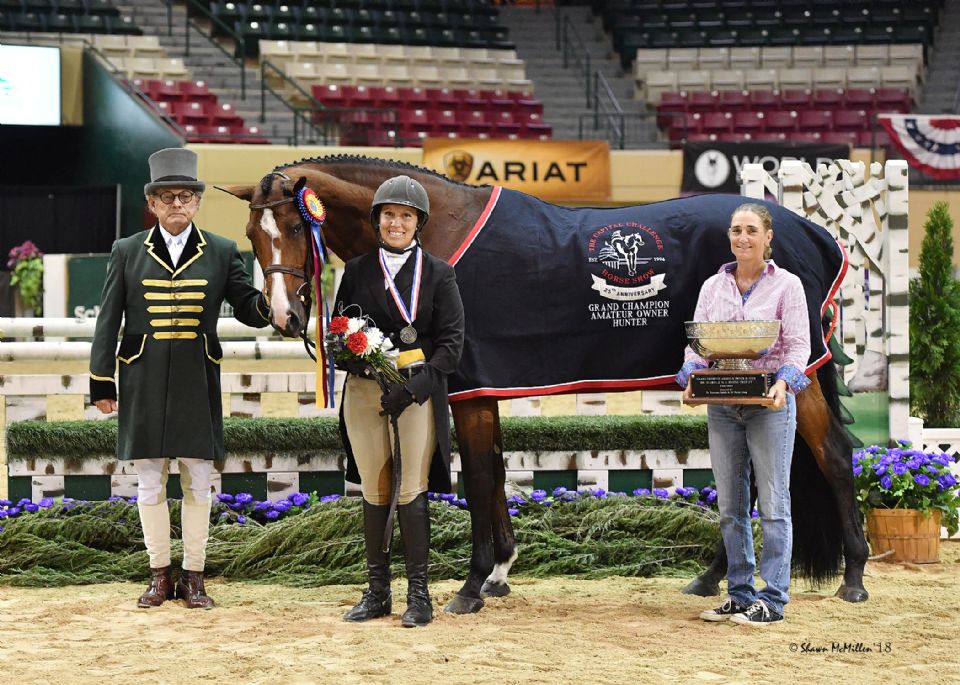 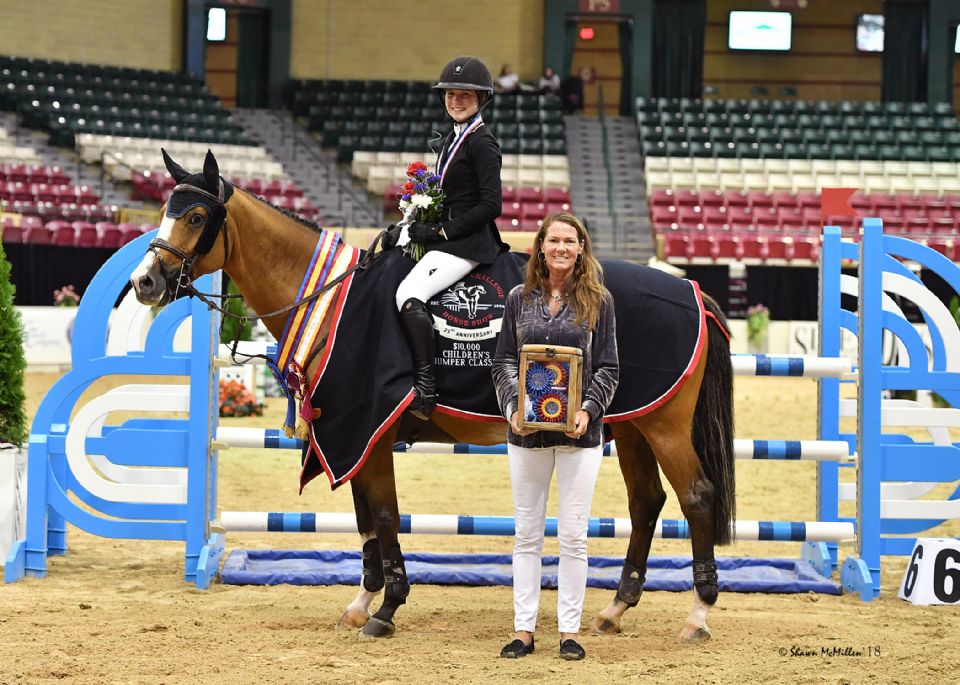 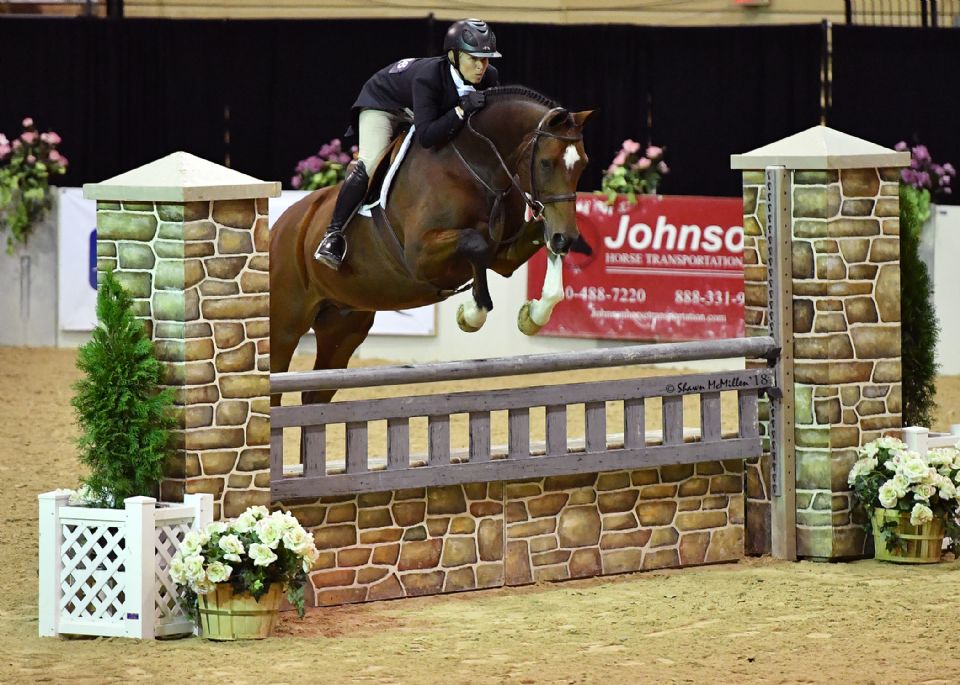 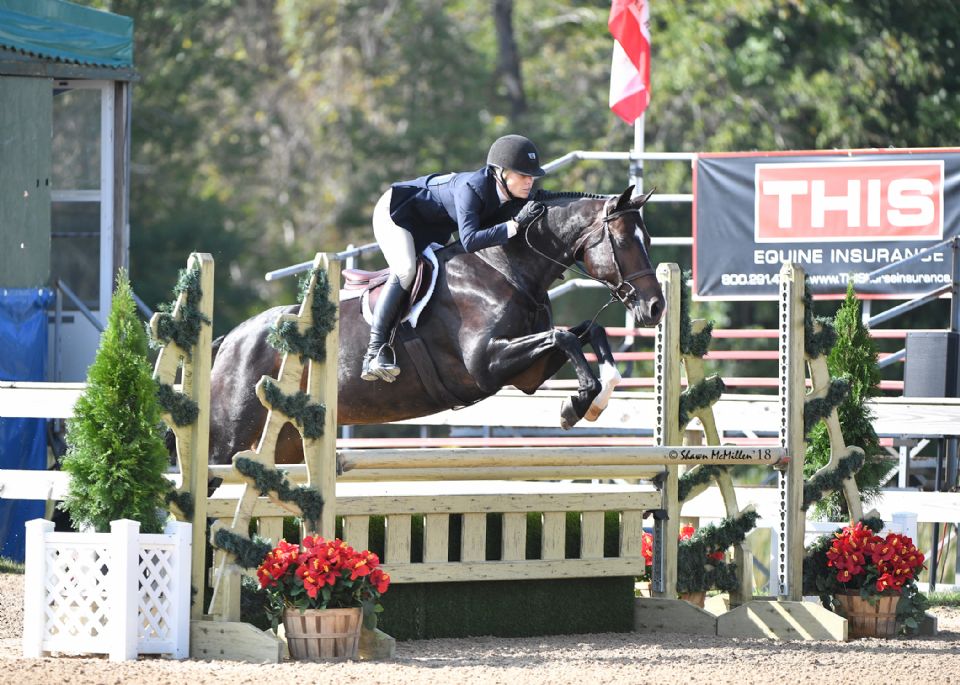 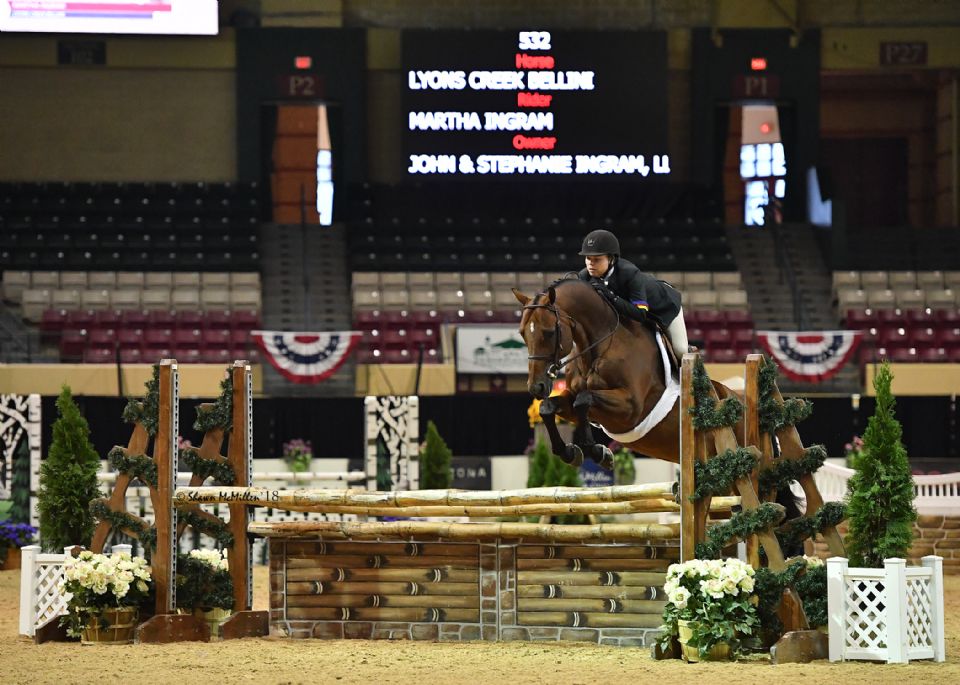 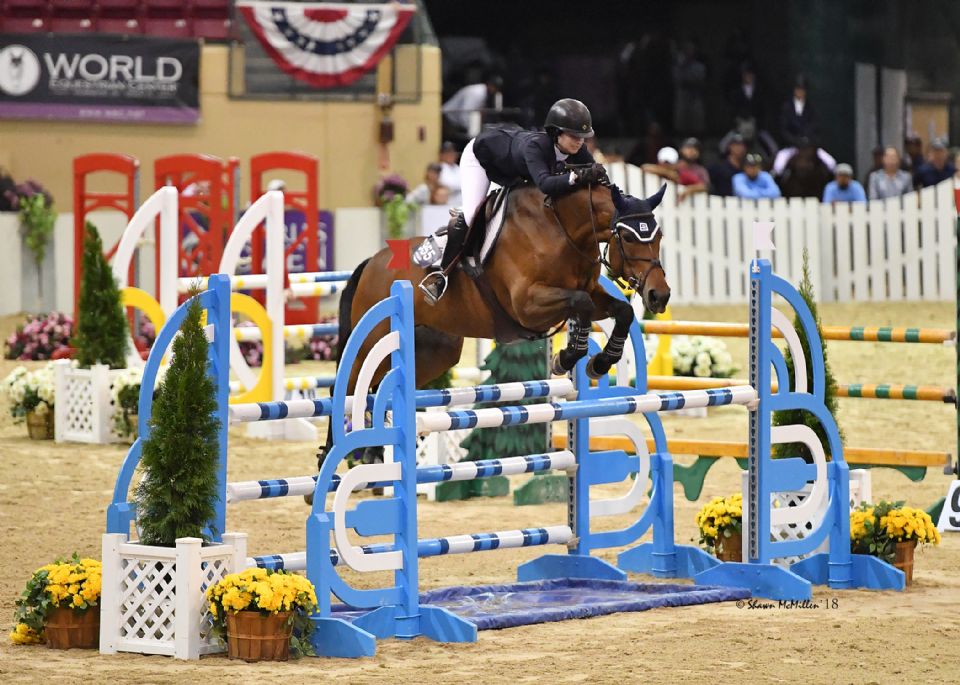 Earning the Adult Amateur Hunter Championship at the show, which continues through Sunday, October 7, at the Prince George’s County Equestrian Center in Upper Marlboro, MD, was Garland Alban of Luthersville, MD, on Remix.

For Maxwell, winning the Grand Amateur-Owner 3’3” Hunter Championship with Belgravia was déjà vu, as she and the 10-year-old warmblood gelding claimed the same honor in 2017.

“It’s such an honor to win here,” said Maxwell. “I love this horse show; I was excited to be back with [Belgravia] again, and to do this twice in a row is really incredible. I’m really proud of him.

“It’s so nice to be able to compare the same show at the same facility,” she continued. “Last year, he was still relatively new to me. I’d only had him for a few months, so we’ve really grown a lot together and gotten much more consistent. I was a lot less nervous this year, because I’ve now known him so much longer; I knew exactly what to expect. He’s an incredible horse, and he’s the same every time that we go in the ring.”

Maxwell and her own Belgravia topped both the Amateur-Owner 18-35 3’3” Hunter opening jumping class (in which they won the EMO Amateur-Owner 3’3” Hunter Trip of the Show Award) and the under saddle on Wednesday, and they returned on Thursday to deliver a clean sweep of the division.

“It was really exciting to win both yesterday, but the competition here is fantastic; we definitely weren’t safe today – anything can happen day two,” said Maxwell. “In the handy, I was able to watch a couple people go, and one of them was Martha Ingram. She’s an incredible rider and is always super handy. I was considering playing it safe in the handy, but I watched her go. She got two 88s, so I was like, ‘Okay Prince, we’re going all out here. Nothing to lose!’ Once you do that first turn, he knows it’s a handy, and it’s really game on. I’m just so proud of him and my team and grateful to all of them.”

Finishing as the reserve champions in the Amateur-Owner 18-35 3’3” Hunter division were Martha Ingram of Nashville, TN, and Lyons Creek Bellini, owned by John & Stephanie Ingram, LLC, who also won the $2,500 WCHR Amateur-Owner 3’3” Challenge

In the Amateur-Owner 3’6” Hunters, the grand championship honor, sponsored by Finally Farm, went to Tracy Scheriff-Muser and her own Aristocrat.

The pair won two out of the three Amateur-Owner 18-35 3’6” Hunter over fences classes and the under saddle to win the division championship, sponsored by the Hallman Family & MerryLegs South, LLC, on their way to the overall 3’6” championship.

“This is just amazing,” said Scheriff-Muser of her win. “I think my first round was probably my favorite round. I just went in, and everything happened to come up right out of stride. That was nice to go in and have a good first round and then feel confident.”

Scheriff-Muser has had her winning mount, Aristocrat, for the last five years, and the pair’s partnership has really started to come together recently.

“He’s been a little bit of a project, but he’s been amazing the whole time,” said Scheriff-Muser of the 10-year-old Oldenburg gelding. “He’s just been a little slower coming along than usual, but now he’s amazing. He jumped really high, and he would like to play. He got excited, and he was proud of himself. Now he’s a puppy dog. He’s full of personality, and he’s so much fun to ride. He’s just amazing. I’m very lucky to have him.

“Havens [Schatt] has done a phenomenal job getting him ready for me, and I’m really lucky to have such a great team behind me,” concluded Scheriff-Muser, who has been competing at Capital Challenge for nearly two decades and who now spends much of her time outside of the ring raising her four-year-old son. “I love this show. It’s one of my favorites. Every year, it’s just so much fun here."

The reserve championship in the Amateur-Owner 18-35 3’6” Hunters went to Golden Rule and Stephanie Danhakl. They placed first, third, and fourth over fences.

The championship in the Amateur-Owner 36 & Over 3’6” Hunter division, sponsored by Mr. & Mrs. Ernest M. Oare, went to Becky Gochman of Palm Beach, FL, riding Catch Me, owned by Gochman Sport Horse, LLC. They won two over fences class and the under saddle. The reserve championship was awarded to Dorli Burke of Salisbury, MD, riding her own Charming. They placed first and third over fences and were third in the under saddle.

Virginia Fout and Cristiano took the top spot in the $2,500 WCHR Amateur-Owner 3’6” Challenge.

Riding her daughter’s horse, Garland Alban rose to the top of the Adult Hunter divisions, picking up the Grand Adult Amateur Hunter Championship, sponsored by Steve Martines, with Remix. The pair was champion in the Adult Amateur 36-50 Hunter division and by winning both over fences classes and placing third in the under saddle, they easily secured the Grand Champion prize.

Alban, of Lutherville, MD, trains with Tim and Kelly Goguen, who are based in Kentucky. Since her horses also live in Kentucky, Alban doesn’t get the chance to ride and practice as much as she would like. Coming into the indoor season, the Goguens recommended she ride her daughter Georgia’s horse, Remix, a 10-year-old Hanoverian gelding by Comte they have owned for a year.

“If I don’t interfere, he does his job like he did,” said Alban. “Of any horse that I ride, Remix is the most straightforward. For me, that is important because I don’t practice hardly at all because they don’t live here. It’s very fortunate that my trainers have prepared him so nicely. He’s so kind and straightforward, which is hard to come by. He takes good care of my child, which is my favorite thing about him, and everything else is a bonus.”

Alban, who competed for the first time at Capital Challenge in the Children’s Hunters, got back in the saddle five years ago after a long break when her daughter Georgia Schmidt showed interest in riding. The mom of four said, “I could tell that I was going to be around horses a lot with her, so I took the opportunity to start riding again myself. I’m lucky to be able to find the time.”

Of her grand championship performance, Alban said, “I’m very excited; it was not expected at all. There are so many great women in my division who are very accomplished. I didn’t expect to have the day shake out as it did, and I couldn’t be more thrilled.”

For her top performance, Alban was named the Best Adult Amateur Hunter Rider, sponsored by Phoebe Weseley and River Run Farm. She and Remix will have their names added to the Equus Entries Challenge Trophy, donated by Sue and Ralph Caggiano of Equus Entries. Kelly Goguen held the Gail Knieriem Memorial Trophy, presented by Jenny Dunion and Evermore, as the Leading Adult Amateur Trainer and was awarded a Rococos belt buckle from Joanne Arakelian.

Reserve champion in the Adult 36-50 division was Vivid, ridden by Stephanie Mushin and owned by DM Diamond Farm LLC. They were second in both over fences classes and won the under saddle.

The champion in the Adult Hunter 18-35 Hunters, sponsored by Lainie Wimberly and Brigadoon Show Stables, was Statement, ridden by Lindsay Tomeu and owned by Popish Farms LLC. They placed first in the stake class and third under saddle, while the reserve championship was awarded to Santiago, ridden and owned by Christina Marie Thomson, with first and fifth place ribbons over fences.

Julia Barnes and Simply Cool captured the championship in the Adult Amateur Hunter 51 & Over division with first and second-place ribbons over fences, while Lynn Walsh and Hollywood Park were reserve champions after placing first and sixth over fences.