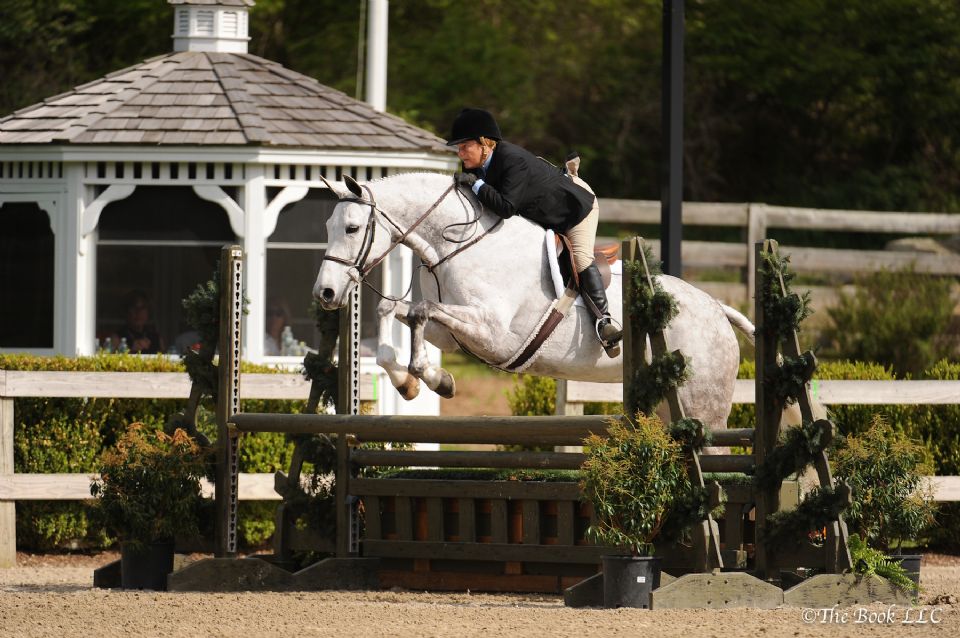 Ann Misenheimer and Cornerstone.
Photo by The Book 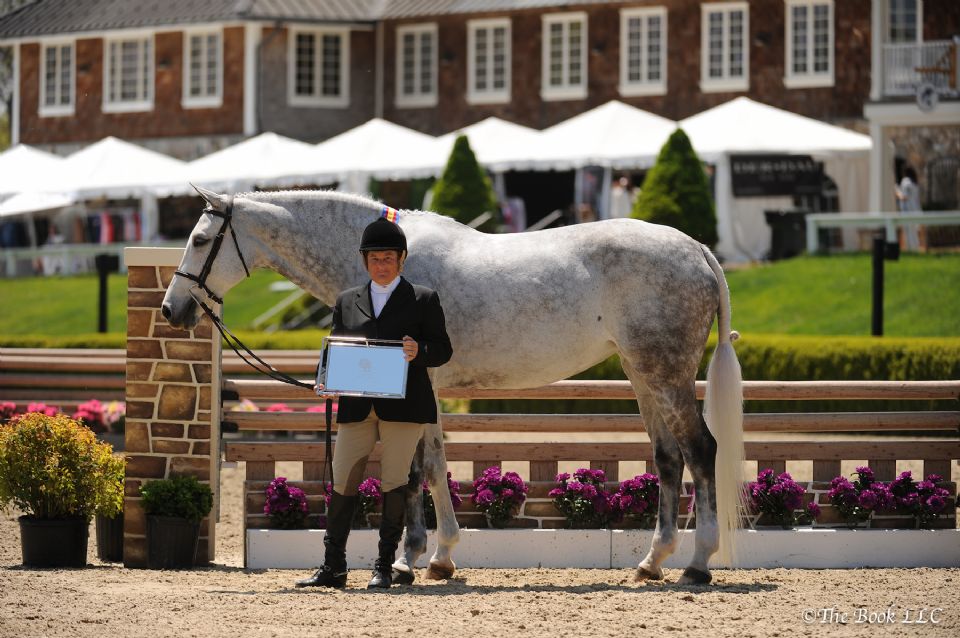 Ann Misenheimer and Cornerstone in their Grand Adult Amateur Hunter Champion presentation.
Photo by The Book 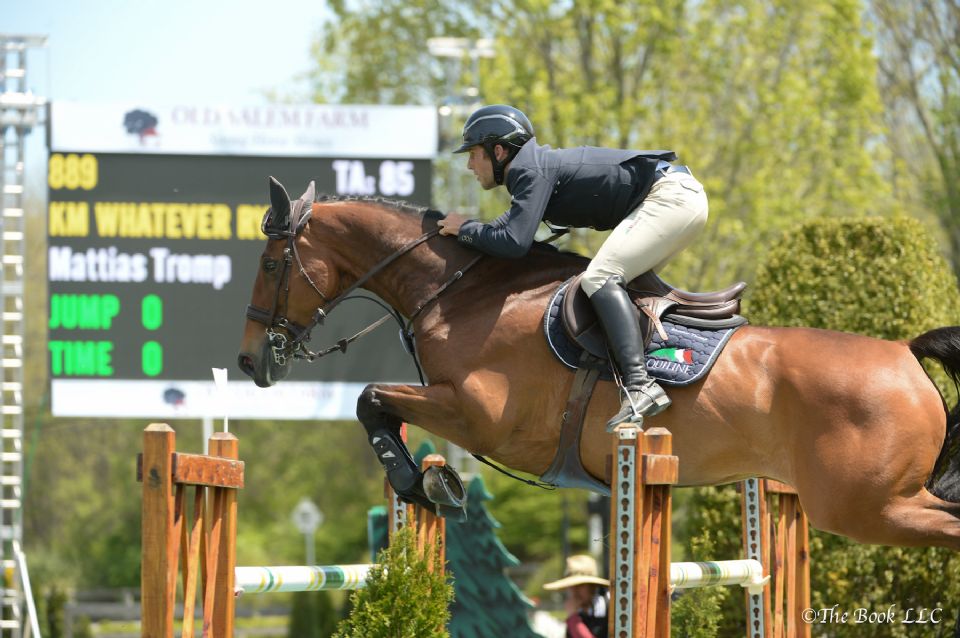 Mattias Tromp and KM Whatever RV.
Photo by The Book 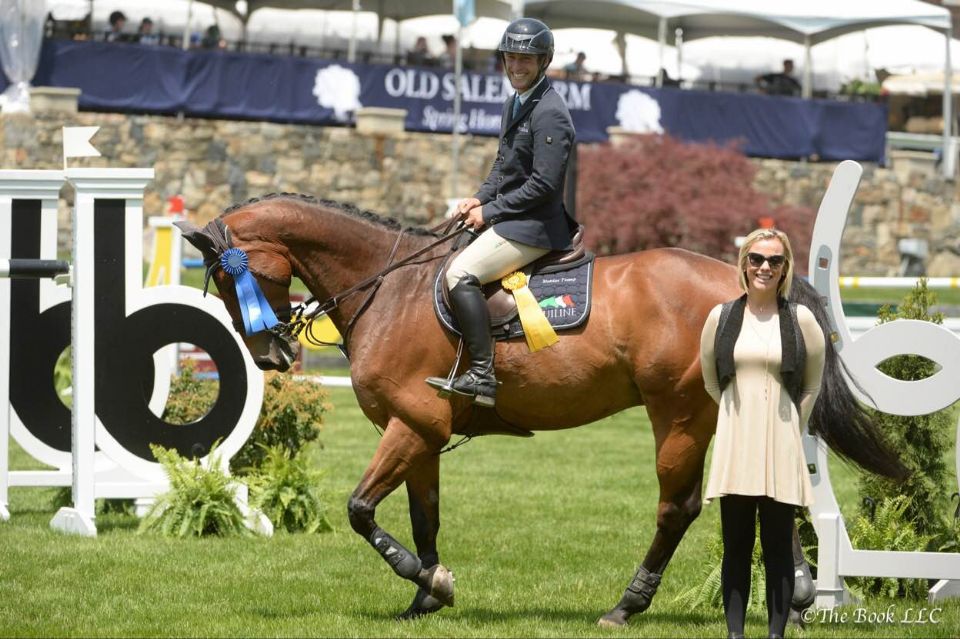 Mattias Tromp and KM Whatever RV presentation with Chelsea Dwinell of Old Salem Farm.
Photo by The Book

Ann Misenheimer and her own Cornerstone were presented as Grand Adult Amateur Hunter Champions after topping the 50 and Over Division on Thursday at Old Salem Farm Spring Horse Shows, running May 10-15 and May 17-22 at Old Salem Farm in North Salem, NY. On the Grand Prix Field, Mattias Tromp of North Salem, NY, topped the $10,000 Open Jumper 1.45m aboard KM Whatever RV for owner Bayaert Farm, Inc.

Misenheimer, who hails from Unionville, PA, and trains with Stacia Madden, rode to three blue ribbons over fences to earn the Grand Adult Amateur Hunter Championship, her first-ever grand champion honor at the Old Salem Farm Spring Horse Shows. Misenheimer and Cornerstone, a ten-year-old Brandenburg mare, were also fifth under saddle and fifth over fences.

“I had no idea that I was going to be grand champion and I was so excited,” said Misenheimer. “This mare is the best. A good mare is a great horse, and she is all of those things.”

Peaches, as Cornerstone is known around the barn, has been with Misenheimer since 2012 and has carried her owner in both the Adult and Amateur-Owner Divisions. Bred as a dressage horse in Germany, Cornerstone was found for Misenheimer by hunter judge, Scott Williamson. But, Misenheimer's attraction to Cornerstone wasn't exactly traditional.

“[Scott] called me and told me about a horse I needed to see,” said Misenheimer about the first time she saw Cornerstone. “He told me I would love her, and I needed to have her. I watched two videos of her doing the First Years in Ocala and a third video of her as a four or five year old, jumping around bridleless! I said, 'That's an amateur horse, and I will end up with her.’”

Four years later Misenheimer admits it's like a dream come true to be able to show at her current level after riding as a child.

Reserve champion honors in the Adult Amateur Hunter 50 and Over Division were presented to James Anderson and Forever, owned by Rivers Edge. They won the under saddle and were first, second, and third over fences.

Tromp added KM Whatever RV to his string a year ago after finding the 13-year-old Dutch Warmblood gelding through McLain Ward.

“I've mostly been getting used to him and learning how to ride him,” said Tromp. “We have been doing the 1.40m and 1.45m classes and we led the 1.40m standings in Ocala this winter. He's such a fun horse to show and compete.”

After only a year together, KM Whatever RV is a mount Tromp would like to keep under him for seasons to come.

“It will be great to show him more and get some results on him,” said Tromp. “He's a pleasure to have, and I don't want to see him go anytime soon. You can see your distances a mile away on him.”

This week marked KM Whatever RV's first time on the Grand Prix Field at Old Salem Farm, and Tromp admitted that he felt very brave.

“It's a beautiful venue and one of the nicest places to show at,” concluded Tromp, who was also third on Thursday in the irons of Triomphe Z for Bayaert Farm, Inc.

The Grand Prix Field will continue Open Jumper competition with the $6,500 Open Jumper 1.35m on Friday before the $35,000 New York Welcome Stake takes the stage at the revised time of 11 am.