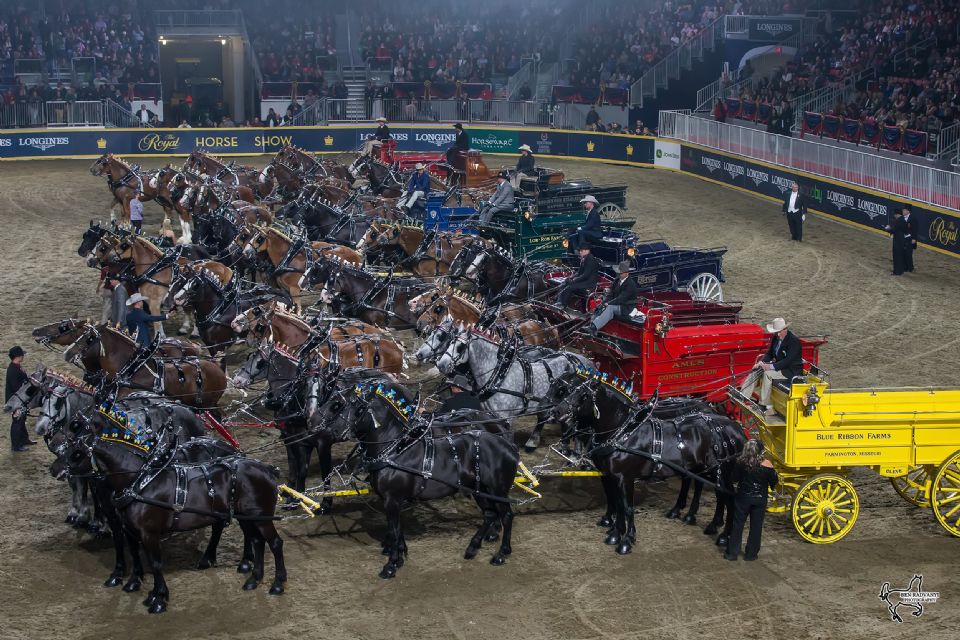 The impressive line-up of hitches in the Royal Six-Horse Draft Championship on Saturday night, November 11, at the Royal Horse Show in Toronto, ON.
Photo by Ben Radvanyi Photography 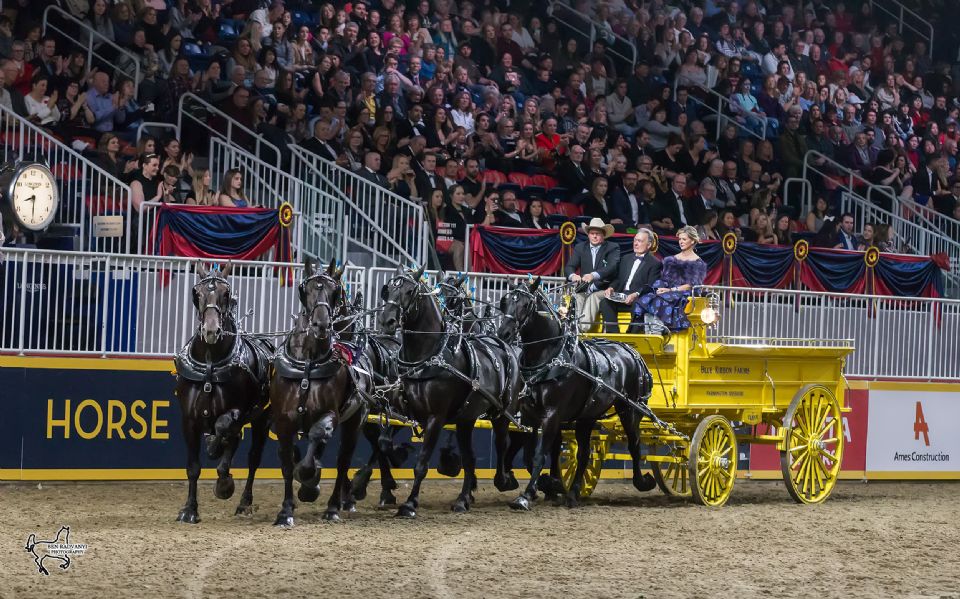 Blue Ribbon Days Percherons, driven by Dean Woodbury and owned by the Albert Cleve and Jim Day families, won the $25,000 Royal Six-Horse Draft Championship on closing night of the 2017 Royal Horse Show in Toronto, ON.
Photo by Ben Radvanyi Photography

The horses of Blue Ribbon Days Percherons, owned by the Albert Cleve and Jim Day families and driven by Dean Woodbury, won the $25,000 Royal Six-Horse Draft Championship on Saturday, November 11, at the Royal Horse Show, held as part of the 95th Royal Agricultural Winter Fair in Toronto, ON.

The $25,000 Royal Six-Horse Draft Championship, presented by Ames Construction Inc., was the culmination of five days of six-horse, breed-specific competition at The Royal, with the top three Belgian, Clydesdale, and Percheron hitches invited to contest Saturday night’s championship in front of a sold-out crowd in the Ricoh Coliseum.

“It’s a great honour to win at The Royal,” said Dean Woodbury, who first contested The Royal in 1982.  “It makes you feel good to win the last show of the year no matter what you’ve done the rest of the time!”

While Woodbury frequently drives a talented team of geldings for Blue Ribbon Days Percherons, it was a team of mares that took the win on Saturday night.

“There was lots of power in that ring tonight and lots of very good hitches all the way through,” said Woodbury.  “The horses get driven at least every other day, if not every day.  They’re just like an athlete; they have to be trained and toned.  You want them to be fit to go into the ring.”

Bryce Smith’s Double S Belgians hitch, driven by Kyle Forsyth of Tillanook, OR, rounded out the top three in the championship, having qualified by winning the Belgian Six-Horse Hitch class on Wednesday, November 8.

In addition to the popular Six-Horse Hitch classes, the 2017 Royal Horse Show also offered Two-Horse, Four-Horse and Unicorn classes for the draft teams.

For more information on the Royal Horse Show, the marquee event of the 95th Royal Agricultural Winter Fair, visit http://www.royalfair.org/horseshow.  For a behind-the-scenes look at the Royal Horse Show, follow The Royal on Facebook, @royalhorseshow on Twitter and @theroyalfair on Instagram.