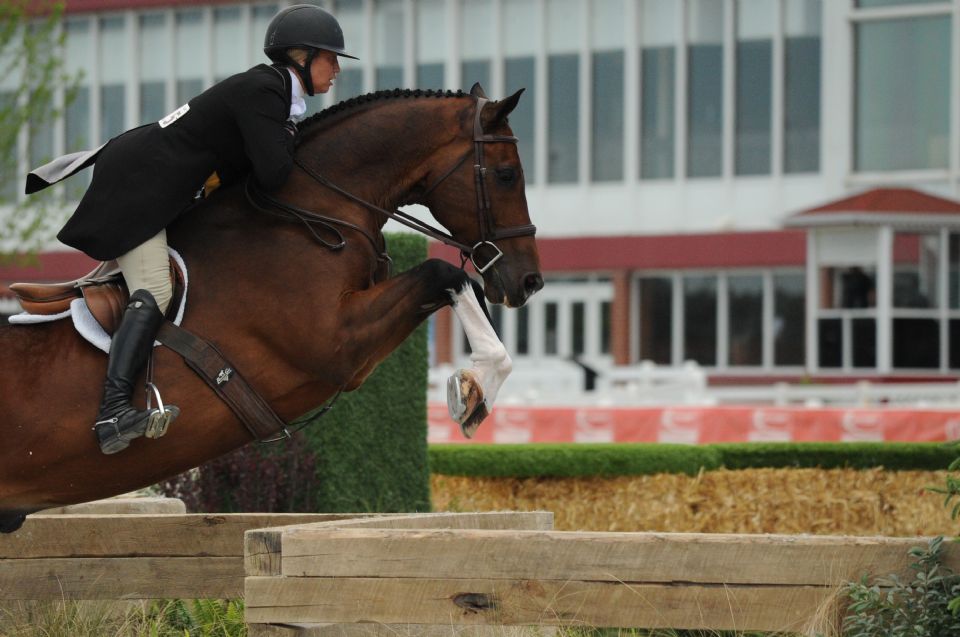 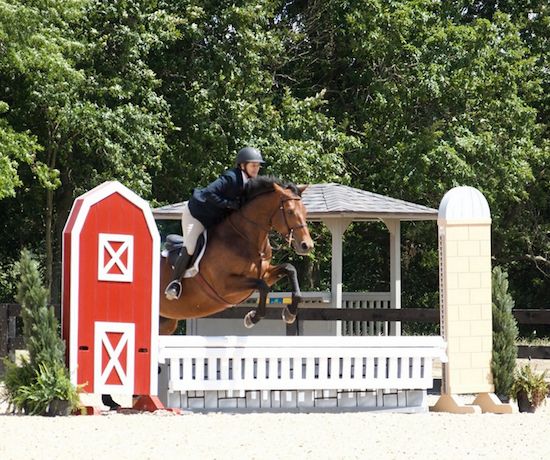 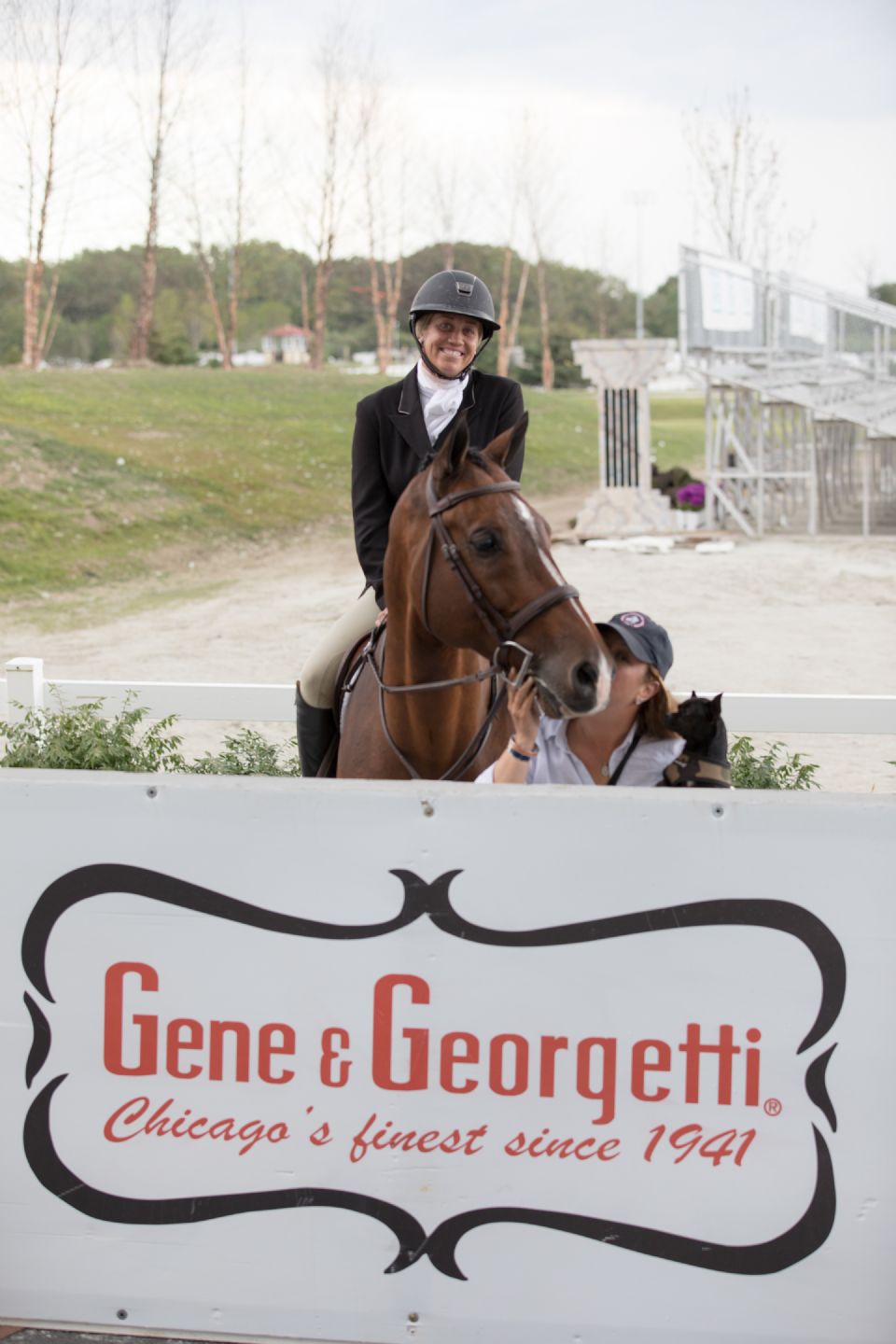 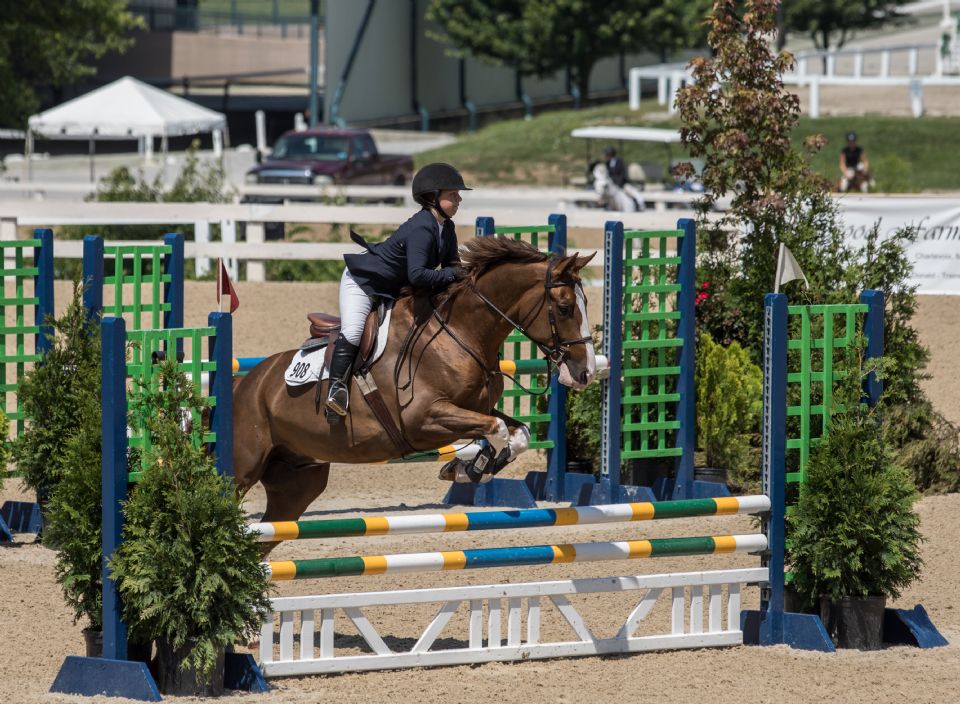 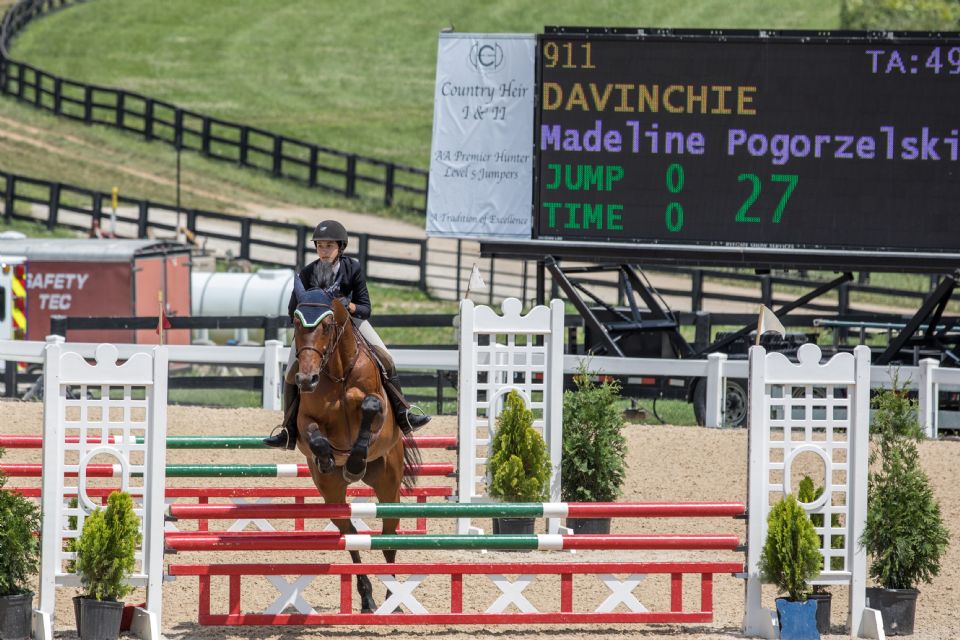 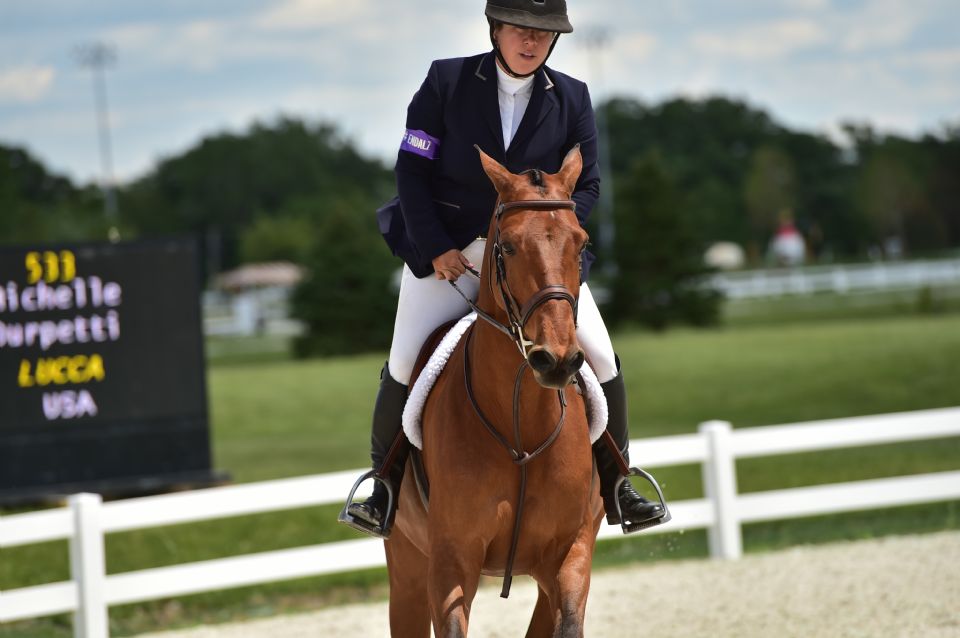 Michelle Durpetti and Lucca riding for the JUMP FOR ALZ fundraiser.
Photo by Collin Pierson Photography 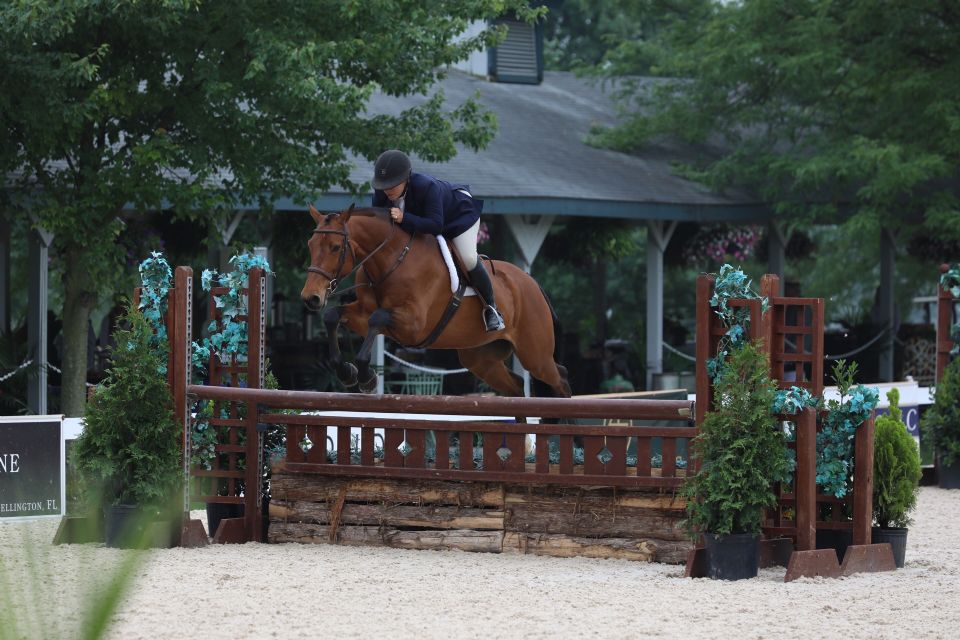 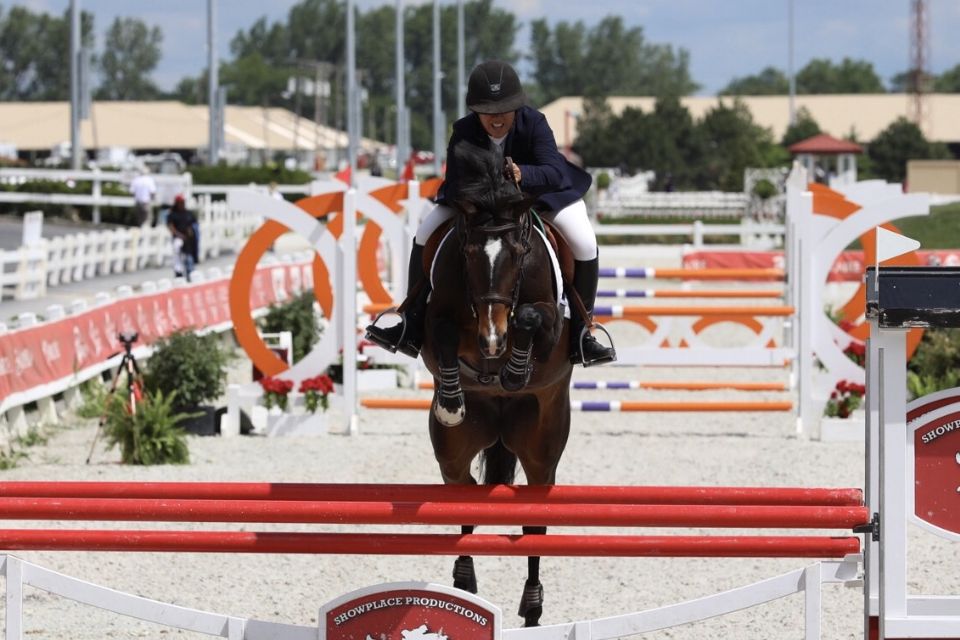 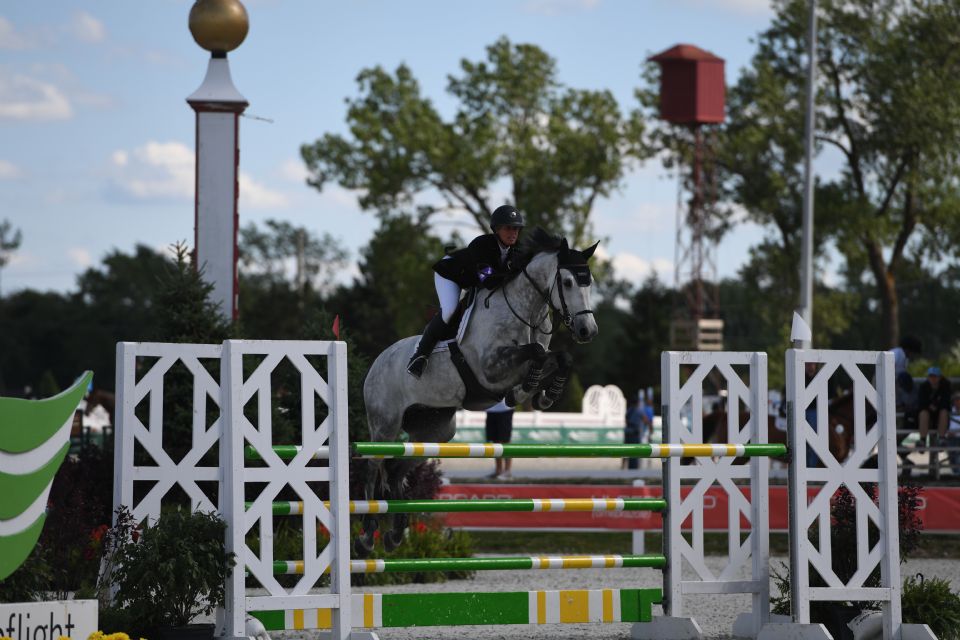 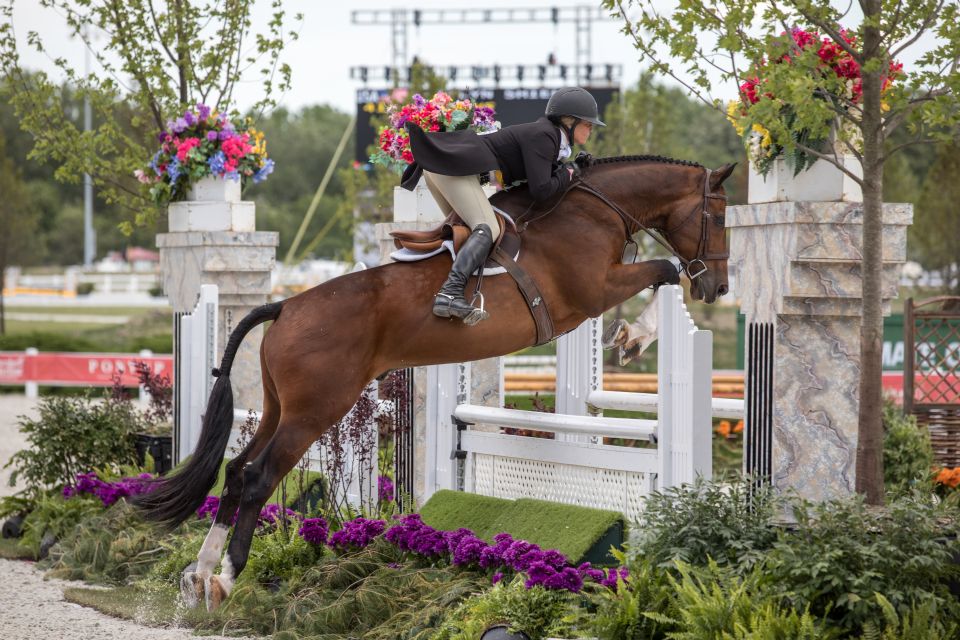 The team at Canterbury Farm, led by trainers Greg Franklin and Caitlyn Shiels, started their summer show season off strong, with top results at Country Heir I and II, held June 7-11 and June 14-18 in Lexington, KY, and at the Showplace Spring Spectacular III at HITS Chicago on June 20-25.

Among the consistent, headlining performers for Canterbury Farm throughout the three weeks of competition was Shiels’s top hunter mount Cassius. The eight-year-old Warmblood gelding, owned by Don Stewart, added numerous ribbons to the Canterbury Farm banner at the Kentucky Horse Park, claiming back-to-back reserve championships in the High Performance Hunters during both Country Heir I and II. Shiels and Cassius also finished in the top ten of both of the $30,000 United States Hunter Jumper Association (USHJA) International Hunter Derby events held each week of Country Heir.

In the jumper ring, Canterbury Farm was well represented by Shiels and her ten-year-old Warmblood gelding, Cavalier II, and by Canterbury Farm riders including Madeline Pogorzelski and Marisa Malevitis. The two young riders finished first and second in one class of the Intermediate Children’s/Adult Jumpers held during Country Heir I, and Pogorzelski and her mount, Davinchie, were ultimately named the division champions.

For Malevitis, great results in the Intermediate Children’s/Adult Jumpers during Country Heir I led her and her mount, Testimony, a four-year-old Dutch Warmblood gelding, to move up to the Low Adult Jumpers during Country Heir II to continued success. After spending the spring with Canterbury for training, this special four-year-old returned home to Rolling Acres Farm to continue his training and showing.

Canterbury Farm would like to congratulate Laurie Olson Elsass of Ohio on the lease of Great Surprise.

Other top performing Canterbury Farm sales horses included KT Kicero, and Hopetown, all of which are available to view online at www.canterburyfarmchicago.com, and may be available to be tried at the Great Lakes Equestrian Festival in July.

“Cassius was an absolute superstar that day. He ended up third overall and second in the handy,” Shiels said of the gelding’s performance in the $25,000 USHJA International Hunter Derby.

“I believe that Showplace always puts on a really great horse show, and they did a really nice job of utilizing the size of the ring and giving us options,” Shiels continued. “When you’re walking courses like that, that have those sorts of options, you just have to decide what’s best for your horse – not what other people are doing. You have to decide where you can shine with your horse looking it’s best. I choose a route based on what I thought would be best for Cassius, and I think that worked out very well for me.”

While Cassius finished third in the derby, the Canterbury Farm also put forth great efforts outside of the ring, thanks to the sponsorship support of her family’s Gene & Georgetti restaurant. Organized by Durpetti, the restaurant hosted an exhibitor’s luncheon for all those involved in the Derby Day.

“It is always such a pleasure to support Showplace Productions at their annual Derby Day by sponsoring the lunch. Pat Boyle and his team really make an effort to make it a special day, and we love being a part of it,” Durpetti said. “Gene & Georgetti is always happy to be out in the community participating and contributing, and it was exciting this year for our entire team to be at the very first Derby Day at the historic Balmoral Park.“

Later in the week, Durpetti also saw her turn in the show ring, finishing in the top four of all four of the Amateur-Owner Hunter Over Fences classes, a third place finish in the $1,000 classic and winning the $1,500 Platinum Performance Hunter Prix, all aboard her seven-year-old Dutch Warmblood gelding, Lucca.

“Lucca – who is named after the town that my family is from in Italy – is just a good egg,” Durpetti said. “I was able to walk into the amateur adult ring in 2016 with him when he was six. In fact, it was only a year ago in May of this year that we started showing in the 3'3” amateur owners, and now I am able to say that I went to indoors, got ribbons, completely enjoyed the process, and am competing in the 3'6”.”

Durpetti continued, “He has a level head, is very naturally athletic, and just knows where he is at all times. And he knows where I am, which is so amazing.  When you pair all of that with a really awesome, big stride and a great rhythm, he is a dream horse. Is he the fanciest of horses? Absolutely not. But he allows me to learn and accomplish. He is my partner in every sense of the word, and because of that, for me he is the ultimate amateur horse. I just adore him and am so grateful to him for his consistently dependable self. Last weekend was no exception. He is so special to me.”

Durpetti also had a great time showing her jumper, Serafina and was thrilled to move up to the adult jumpers with the 8-year-old mare. “Serafina is an excellent partner and teacher, and it is such a thrill to feel my riding progressing! I think that is really the ultimate goal of every amateur – to feel a sense of accomplishment and progress, and I am really enjoying the feeling this summer.”

Spring Spectacular III also gave Shiels and Durpetti a chance to participate in the “JUMP FOR ALZ” fundraiser that was looking to raise money for the Alzheimer’s Association. Brenda Mueller of Chicago Equestrian was a driving force and organizer behind the fundraiser and reported earlier this week that the efforts raised more than $10,000 for the well-deserving charity.

“We were thrilled to participate in this fundraiser, and I love seeing efforts like this at horse shows that give equestrians a chance to give back while doing what we love,” said Shiels.

Durpetti, Shiels, and all of the Canterbury Farm team now return home to Hampshire, Illinois, for two weeks of rest and relaxation for the horses before heading to the Great Lakes Equestrian Festival in Traverse City, MI.

Canterbury Farm maintains a horse show schedule on a local, regional, and national level that is created with their customer’s competitive goals in mind. With qualified trainers, attention to detail, and a caring staff, Canterbury Farm is committed to excellence in horsemanship, and to giving all of their riders a great experience in the show ring.

Born and raised in Sheffield, Massachusetts, Caitlyn Shiels began riding at the age of eight. A highlight of Shiels’ early career was being a team and individual gold medalist at the 2004 North American Young Riders’ Championship. Shiels went on to apprentice under such professionals as Andre Dignelli, Mclain Ward, Ken Smith and Kate Stoffel-Oliver. Almost immediately after she joined the Canterbury team as an assistant trainer and rider in 2013, Shiels and head trainer Greg Franklin both began earning championships at major shows. Their partnership is an excellent balance of training both on the horse and from the ground.