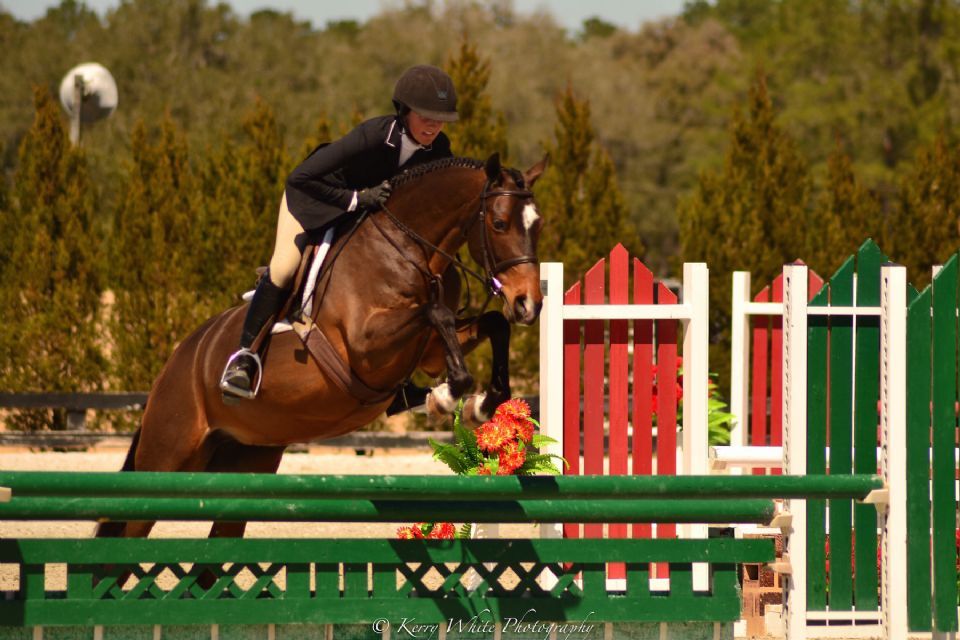 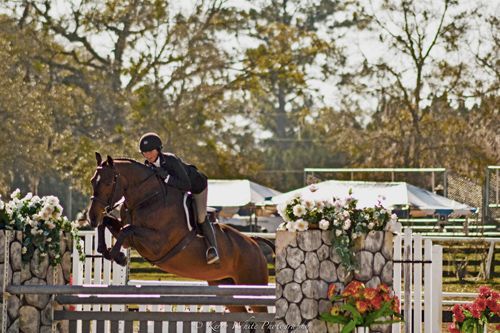 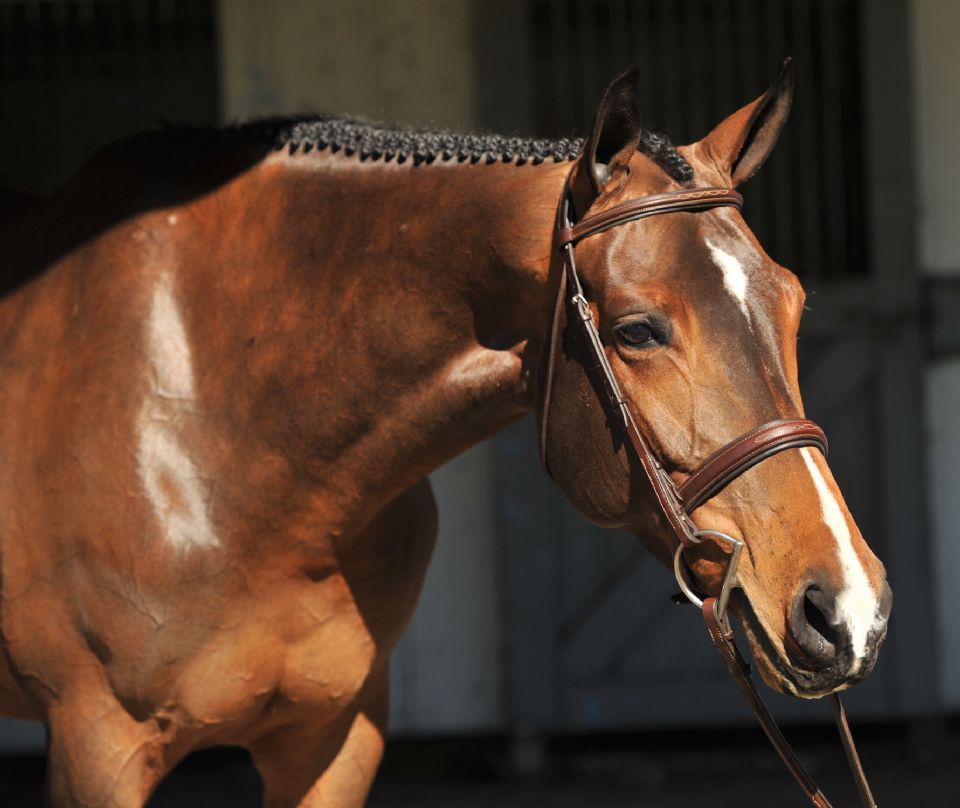 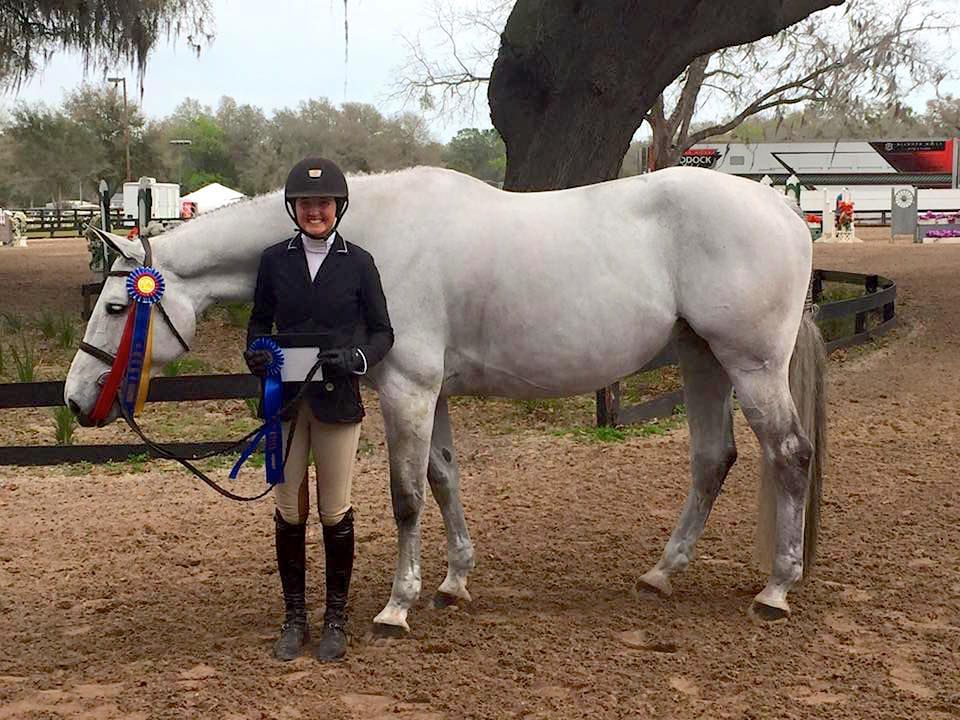 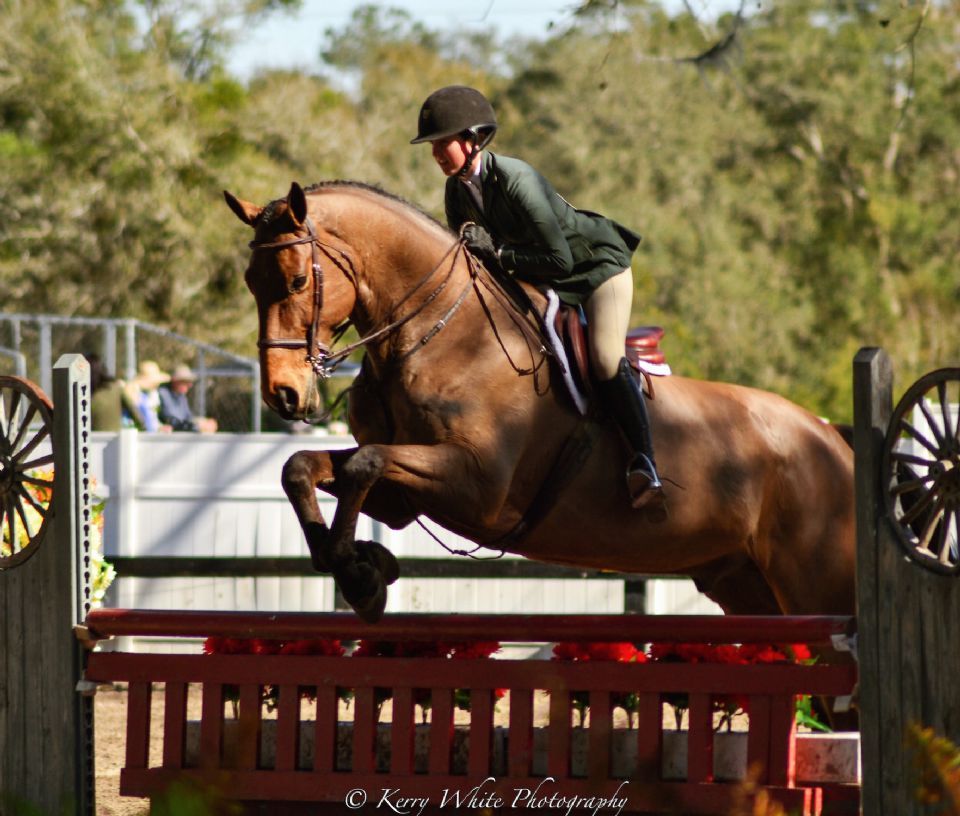 Abigail Brayman and Zops in the equitation.
Photo by Kerry White 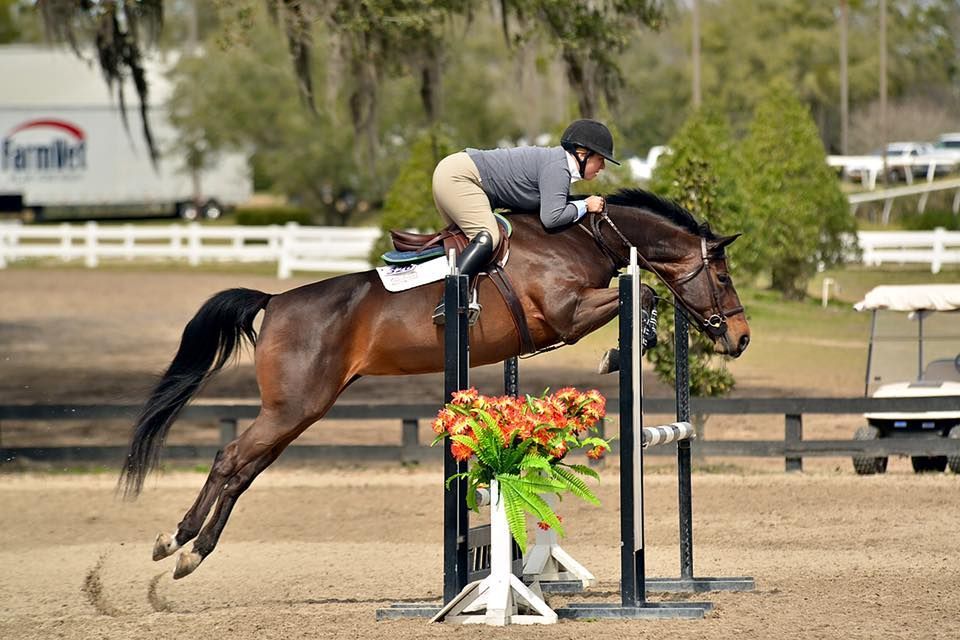 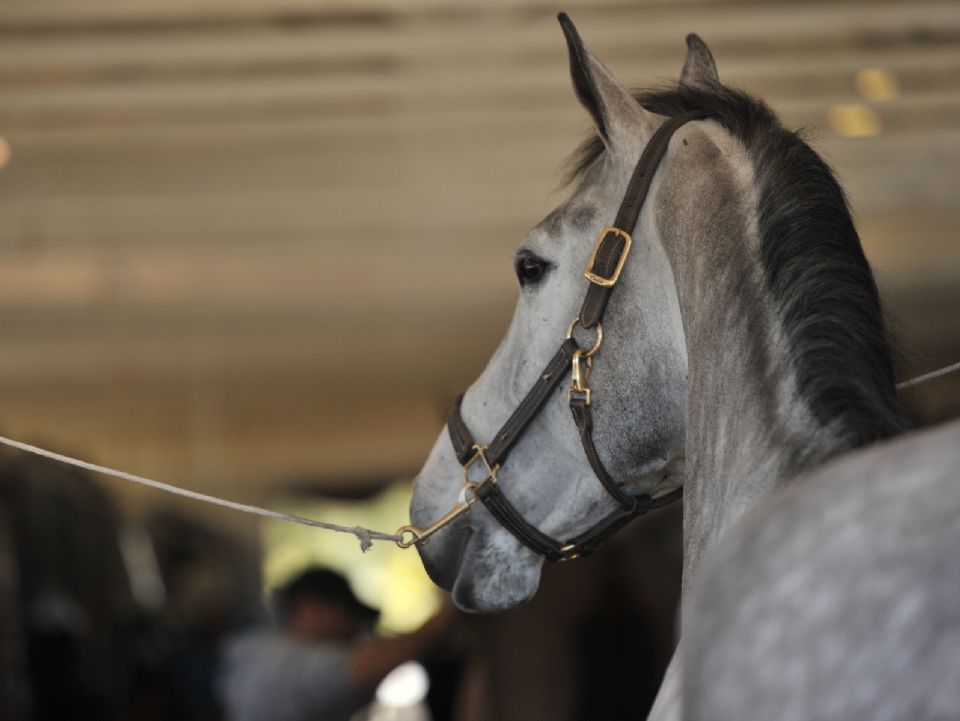 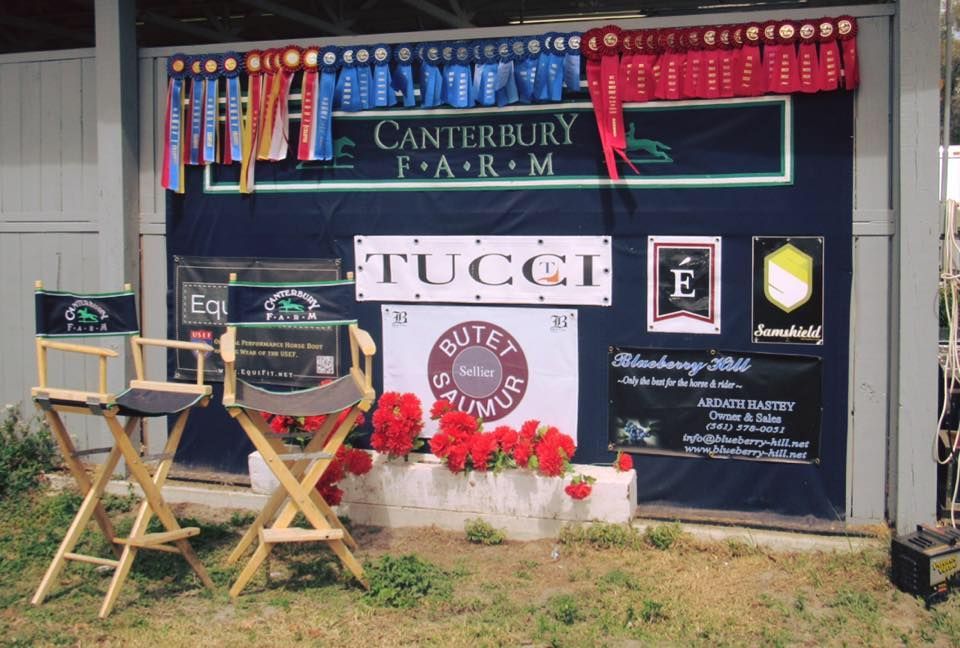 The end of a great winter.
Photo by Michelle Durpetti

Canterbury Farm wrapped up ten weeks competing at the 2016 HITS Ocala Winter Circuit in Florida this week. The team, led by trainers Greg Franklin and Caitlyn Shiels, had great success throughout circuit, with top ribbons in everything from ponies up to the grand prix level. Young rider Abigail Brayman joined the Canterbury team for the winter and rode several horses to top ribbons. Amateur rider Michelle Durpetti had great results with her mounts throughout the circuit, and Shiels developed some of Canterbury’s future equine stars.

Hillcrest Songbird had a memorable winter competing in the Large Pony Hunter division and concluded the circuit with great success. The 12-year-old mare (by Hillcrest Blue Smoke) was overall reserve circuit champion after earning the division championship during weeks three and four, ridden by Abigail Brayman.

Brayman (17) of Ashaway, Rhode Island, began riding at a young age at her family’s Hunter Ridge stables. She began training with her mother, Wendy, and grew up traveling to horse shows with her father, Matt’s, job in the business. Brayman has worked with a lot of trainers over the years that helped her get to where she is today. This winter, Brayman had the opportunity to train with Franklin and Shiels in Florida. Brayman trained with Canterbury Farm throughout the winter and learned a lot, while also earning great results.

In week three, Brayman and Hillcrest Songbird also won the $1,000 Perfect Products Large Pony Hunter Classic. In week four, the pair finished second in the Classic. They were also third in the Classic during week five. Hillcrest Songbird is available for sale or lease. She is qualified for U.S. Pony Finals 2016 and is currently in the top 12 in the country in the Large Ponies. Trained with them the whole winter.

“She was wonderful,” Brayman said of Hillcrest Songbird. “When she went in the ring she always wanted to win. She was easy to ride and she has a nice, big step. She was always really good.”

Brayman also showed Margo Lyons’ Kadence Darco and Katherine Heywood’s Balida to tricolor ribbons. Kadence Darco continued her success throughout the winter, earning the reserve circuit championship in the Small Junior Hunters for the second half of the circuit. She was reserve champion in the division in week seven ridden by Brayman, and also won the Small Junior Hunter Classic during week eight ridden by Melissa Deryn Foster.

The gorgeous six-year-old Belgian Warmblood mare (by Darco) is for sale. Kadence Darco is an excellent Small Junior Hunter. She is a beautiful mover, has not been lower then fourth in the under saddles at HITS, and is a super jumper with an excellent brain.

Katherine Heywood’s Balida ended her winter circuit with top finishes, and Canterbury Farm would like to congratulate Elise Ledsinger and her trainer Tom Bebb on the purchase of this talented mare. During week three, Shiels guided Balida to the reserve championship in the Performance Working Hunter 3’6” division. Heywood and Balida then jumped several great rounds in the Amateur-Owner Hunter 18-35 division in week seven.

Along with her hunter rides, Franklin and Shiels helped Brayman ride to top ribbons in the equitation divisions, and Brayman spoke of how much they helped her riding throughout the winter.

“Greg and Caitlyn were both really different,” Brayman noted. “They both really worked on my position and I got a lot stronger as a rider. I did a ton of no stirrup work, which I do not usually do, so that was really good for me. We also did a lot of really technical exercises, so that was good.
Training with them was a really good experience for me and I had a great time.”

Brayman had a great time being a part of the Canterbury Farm team. She hopes to travel to Chicago to train with Franklin and Shiels again as the season continues on.

Durpetti had a great winter with her nine-year-old Dutch Warmblood mare Serafina (by Verdi) as well. Durpetti originally purchased and imported the stunning mare from Stal Wilten to be a hunter, but Serafina has taken more to the jumper ring. Under the expert guidance of Franklin and Shiels, Durpetti made the decision to try Serafina in the different discipline. The trainers advised Durpetti to listen to what her horse was telling her, and Serafina happily made the move, embracing her quick pace. The pair made their debut in the Low Adult Jumpers for the first time together in Florida and had a blast.

Caitlyn Shiels and her nine-year-old Warmblood gelding Cavalier II (by Whitesnake) received good ribbons competing in the 1.30m classes through the last half of the HITS Ocala circuit. The talented young gelding has begun stepping up to the bigger classes as he continues to develop beautifully.

Shiels imported Cavalier II herself, and has worked with many different trainers, even the legendary George Morris and other experts, as she brings the horse along. Even as a professional rider and trainer, Shiels is always reaching out to learn more. What she learns ultimately benefits everyone at Canterbury Farm and all of her horses and students.

Shiels also got to show Marcia Franklin’s Grayshott for the first time this winter. The five-year-old Hanoverian gelding (by Diarado) made his horse show debut in the Pre-Green Hunters and will be competing in the Pre-Green Incentive Classes this year. Everyone at Canterbury Farm is excited to see what the year holds for the talented young gelding.

The team at Canterbury Farm will have a nice break at home through April, and will compete next at the Maffitt Lake Spring Gathering Horse Shows the weeks of May 11-15 and May 18-22, 2016.

Canterbury Farm is also now accepting customers for the 2016 show season with a wide variety of sale horses available for lease or sale. For more information, check out the brand new Canterbury Farm website at www.canterburyfarmchicago.com.