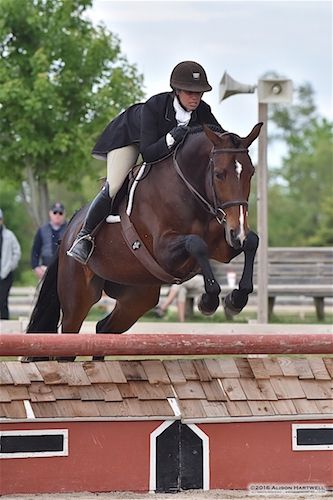 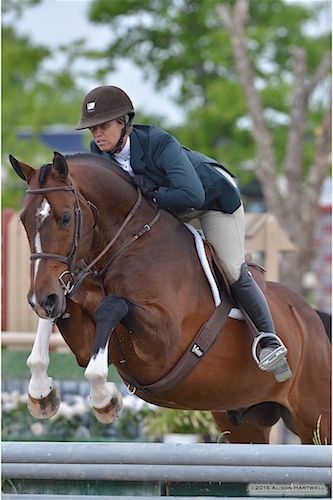 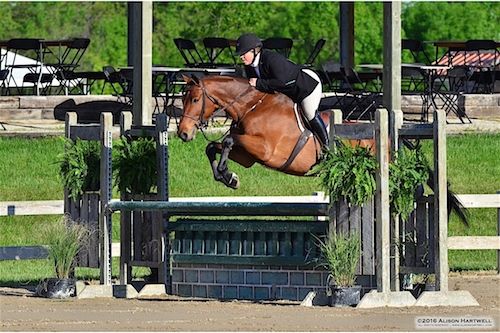 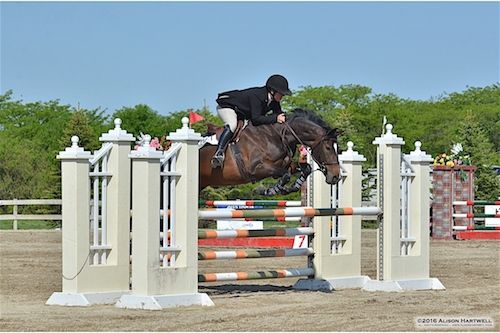 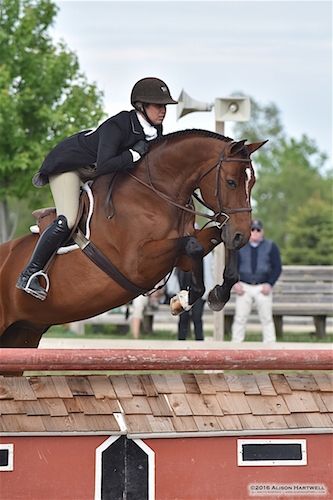 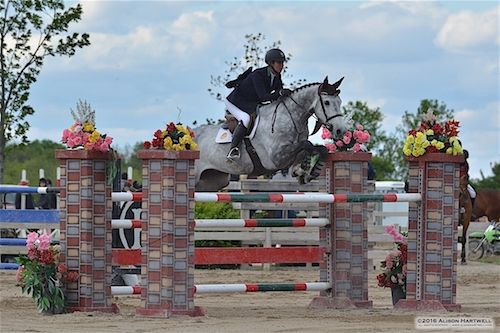 Led by trainers Greg Franklin and Caitlyn Shiels, Canterbury Farm is a full-service hunter/jumper training and show facility located in Hampshire, IL, and owned and operated by the Franklin family. For more than 30 years, they have dedicated themselves to providing exceptional service to their clients by offering personalized training and care for both horse and rider.

During two fantastic weeks of competition in Iowa, Shiels guided Margo Lyons’ Kadence Darco to a championship win in week two and a reserve championship in week one with fantastic results in the First Year Green Working Hunters. The gorgeous six-year-old Belgian Warmblood mare (by Darco) also stepped up to jump in the National Hunter Derby and finished eighth.

“She is a lovely mare,” Shiels said of Kadence Darco. “She has a really big heart, and she is really the easiest young horse that I have ever ridden. She never trained the lead change; she just all of a sudden started getting them in the ring. She has a big stride, and she is super scopey.”

In 2015, Kadence Darco qualified for the USHJA Pre-Green Incentive Finals, and also competed in the national class at the Chicago Hunter Derby, where she performed like a pro over the impressive obstacles in a large, open grass field. This winter, she moved up to the First Year Green Hunters and also competed in the Small Junior Hunters with Abigail Brayman.

“Everything we have asked of her, she has done, ten-fold and more,” Shiels stated. “She is brave, she is beautiful, and she always wins the hack or gets a top prize. She is just super simple. She is going to be a lovely junior or amateur for someone. She can do the derbies too - anything that you give her she will do. She is really a great mare, and she has a great brain.”

Another exciting sale horse for Canterbury Farm is Cassius, a beautiful seven-year-old Warmblood gelding owned by Don Stewart. At the Spring Gathering Horse Shows, Cassius was reserve champion in the High Pre-Green Hunters with great ribbons both weeks and also stepped up to jump in the National Hunter Derby with a fifth place finish.

Originally planned to be a hunter derby horse, Shiels soon learned that his attributes would help a rider succeed in the equitation ring as well.

Shiels said of Cassius, “He is brave, scopey, and beautiful. He lands both leads and counter canters. He is everything that you want in an equitation horse. I kept saying that I wished I was still a junior because he would totally be my top horse.”

Cassius showed improvement from week to week at Maffitt Lake.

“He started showing his true colors to be a real hunter,” Shiels said. “He was really figuring out his technique, and he went lovely in the derby. He could be a legit derby horse as well, so I think he is a jack-of-all-trades. He would be great for someone that wants to maybe do the junior hunters, equitation, and derbies. He is going to turn into quite a stellar horse.”

Michelle Durpetti had a fantastic two weeks showing her six-year-old Warmblood gelding Lucca, earning the Amateur-Owner Hunter 3’3” division championship two weeks in a row. In week one, the duo won all four classes over fences and topped the Junior/Amateur-Owner Hunter Classic. They also jumped to multiple wins in week two to win their division.

After purchasing the gelding in October of 2015, Durpetti began showing him in the Adult Amateurs this winter, but decided to take the next step up in Iowa. Shiels explained how the partnership between Durpetti and Lucca has quickly developed thanks to dedicated work at home since the winter season.

Shiels detailed, “Michelle has been jumping bigger and starting to really get the connection with him. He is still young. I think that in the year that he has been in America, and the short period of time that we have had him, he is starting to mold into a really nice hunter. I told Michelle to just step right into the 3’3” the first week, and I think she was more than prepared to do that. She felt really confident, and she was super solid both weeks.”

On her great results with Lucca, Durpetti stated, “It has been a really exciting last few months with this horse. He has a wonderful brain and maturity beyond his years for which I am so eternally grateful. Getting back into the amateur-owner ring was such a thrill and also really emotional for me because that division is just so special to me. The hunters are really where my passion is and I am so thrilled to have had such a fantastic two weeks competing.

“Caitlyn and Greg have done a wonderful job instilling confidence and cultivating Lucca's strengths, and I can't thank Caitlyn enough for knowing when to push me just out of my comfort zone and to reach that much farther,” Durpetti continued. “At the end of the day, this is a hobby, and it is supposed to be fun - and on this team, in this program with these horses, it has been exactly that, which is such a gift! I am very much looking forward to the rest of the journey with him and this great team.”

Other great results came from Durpetti and her nine-year-old Dutch Warmblood mare Serafina (by Verdi). Durpetti originally purchased and imported the stunning mare from Stal Wilten to be a hunter, but Serafina has taken more to the jumper ring. She showed in the Low Adult Jumpers and had two good wins, and Shiels showed the mare in the 1.10m for the first time and also won a class.

“That horse has really come into her own,” Shiels noted. “We put in a few good months trying to make her a hunter when we imported her last year, and then decided she had a little bit too much blood, so we tried her as a jumper. She came from Europe doing the jumpers, and all of a sudden the horse is so happy and seems to really enjoy it. It is exciting for Michelle and they are starting to move up a little bit, so we can’t wait to see what the future holds for them.”

Durpetti added, “One of the things that I value most about Caitlyn and Greg is how much they respect not only my opinions, but those of my horses. After those few months of exploring if Serafina would feel comfortable in the hunter ring, it was very much a collaborative decision to listen to her and make the decision to move her into the jumper ring. As an amateur who can occasionally battle some anxiety in the show ring, it has been the most incredible experience to walk into the jumper ring and have trainers that support me, and [to have] such a partner in this horse. Serafina is with me every step of the way. She is so bright and so confident, and I am so fortunate to have these two great horses with me now to pursue my competitive goals in the show ring.”

Helen Lindsey’s Granted Wish returned to the show ring in Iowa for the first time since competing at the 2015 Capital Challenge Horse Show and was in his usual perfect form, carrying three different riders to championships in three different divisions.

“He is just a good egg,” Shiels smiled. “He can do anything and is such a good horse.”

Canterbury rider Madeline Pogorzelski also got her hands on a championship tricolor in Iowa. Pogorzelski moved up to show Marcia Franklin’s Cydelle in the Children’s Hunter 3’ division for the first time and was champion in week two. Cydelle is a talented nine-year-old Dutch Warmblood mare (by Popeye K) that also shows a lot of promise. Along with her rounds with Pogorzelski, the mare jumped to the championship in the Non-Thoroughbred Hunter division with Shiels during both weeks of competition.

Shiels showed her own jumper, Cavalier II, as well. The nine-year-old Warmblood gelding (by Whitesnake) had two solid weeks doing the welcome and the grand prix.

“He is starting to really turn the corner to become a real grand prix horse and jump the bigger classes,” Shiels stated. “I am looking forward to the summer. He is nine this year. I bought him as a six-year-old, and he is doing really well. I think he is really ready to start taking the next step, and I am excited about what he can do.”

The horses and riders of Canterbury Farm have two weeks off before they compete next at the Lamplight Equestrian Center in Wayne, IL, for the Showplace Productions’ Spring Spectacular Horse Shows. The summer schedule then includes the Great Lakes Equestrian Festival II, III, and IV in July, and Equifest II and III in August.

Canterbury Farm is now accepting clients for the 2016 show season with a wide variety of sale horses available for lease or sale.

For more information, check out the brand new Canterbury Farm website at www.canterburyfarmchicago.com.