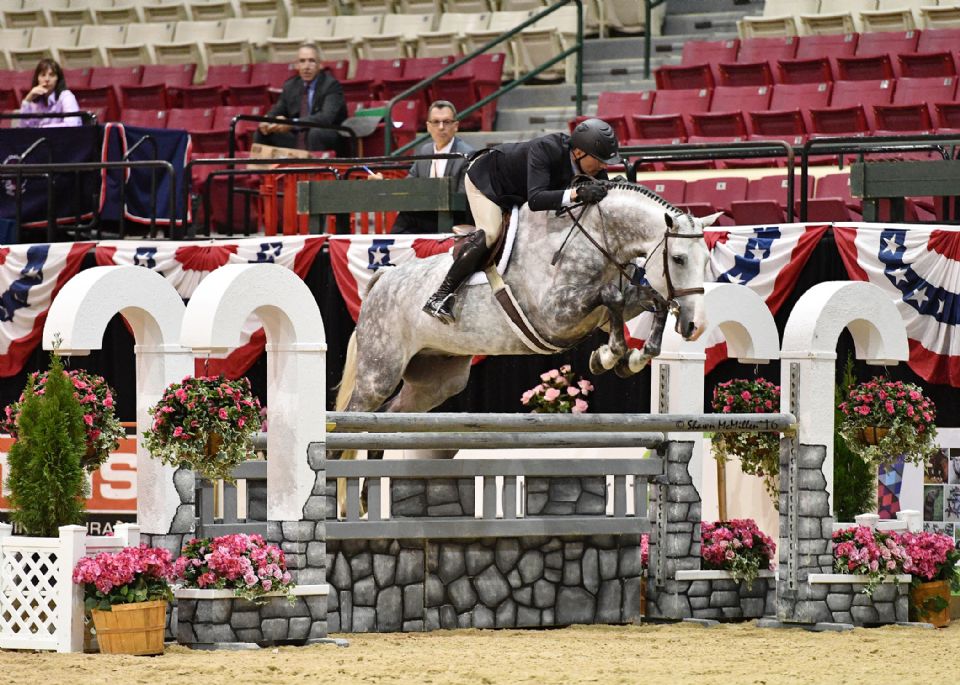 Scott Stewart and Catch Me jumped to the division championship in the Second Year Green Working Hunters on Tuesday at the Capital Challenge Horse Show.
Photo by Shawn McMillen Photography 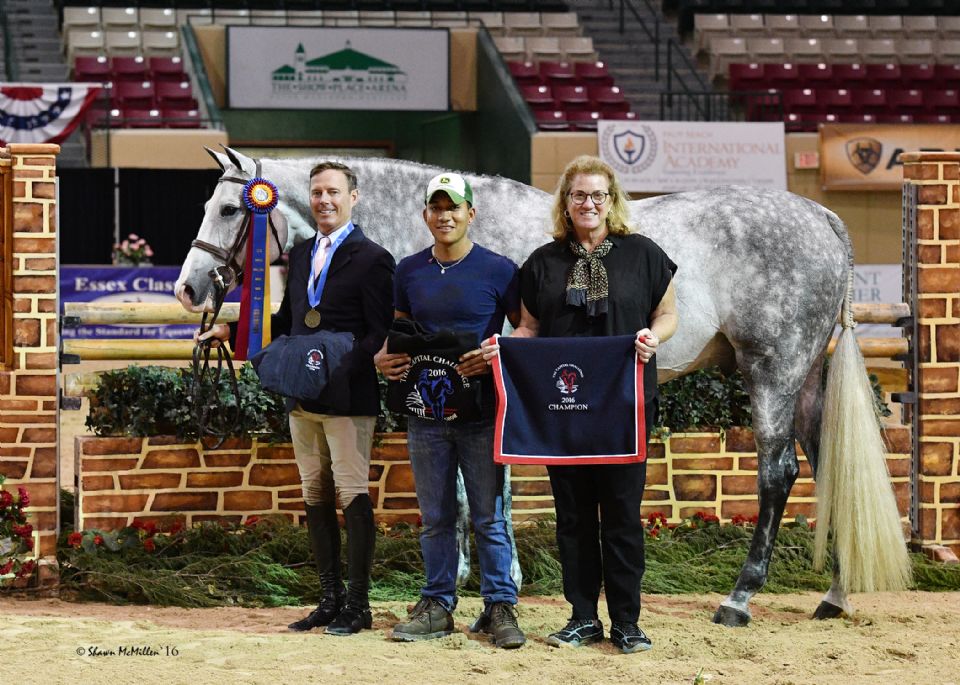 Scott Stewart and Catch Me were presented with the Second Year Green Working Hunter Championship by Jennifer Burger.
Photo by Shawn McMillen Photography 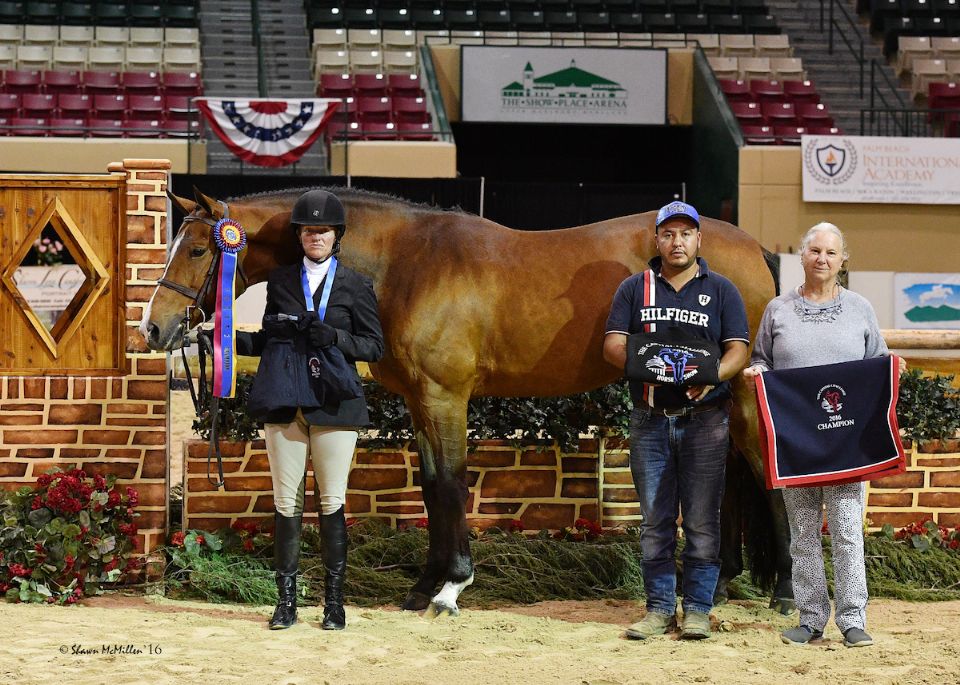 Kelley Farmer and Because joined in their winning presentation photo by Because's groom, Jesus Piña, and Karen Long Dwight of Take the High Road, LLC.
Photo by Shawn McMillen Photography 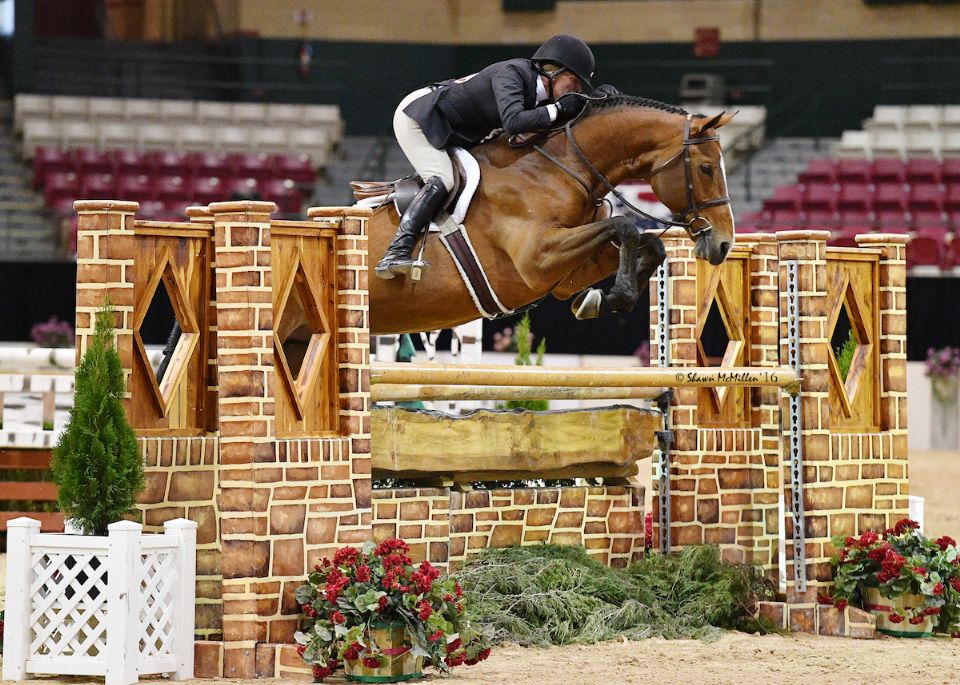 Kelley Farmer and Because.
Photo by Shawn McMillen Photography 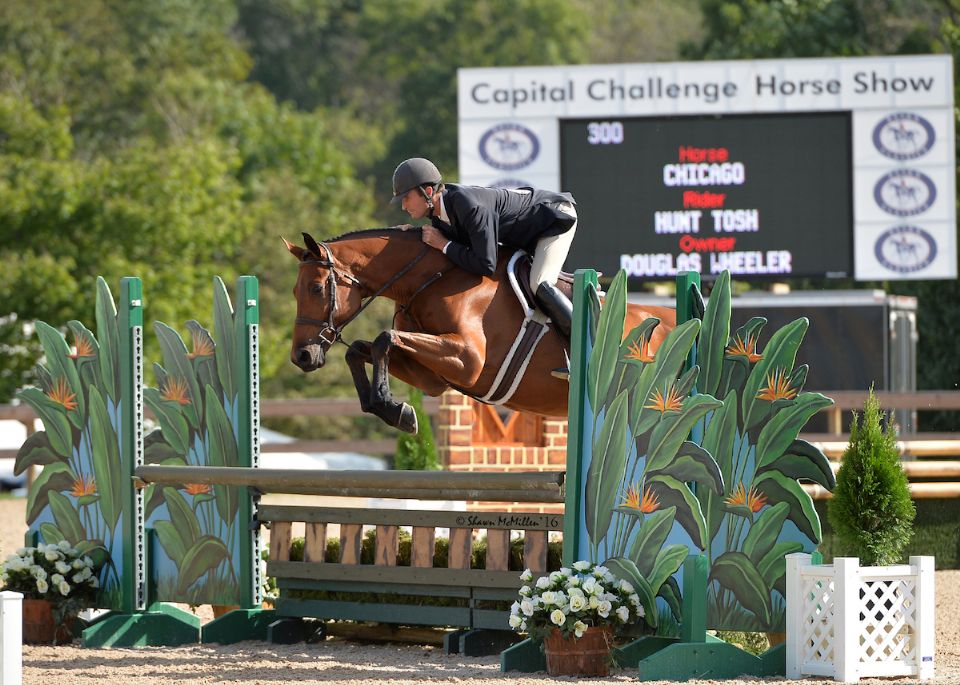 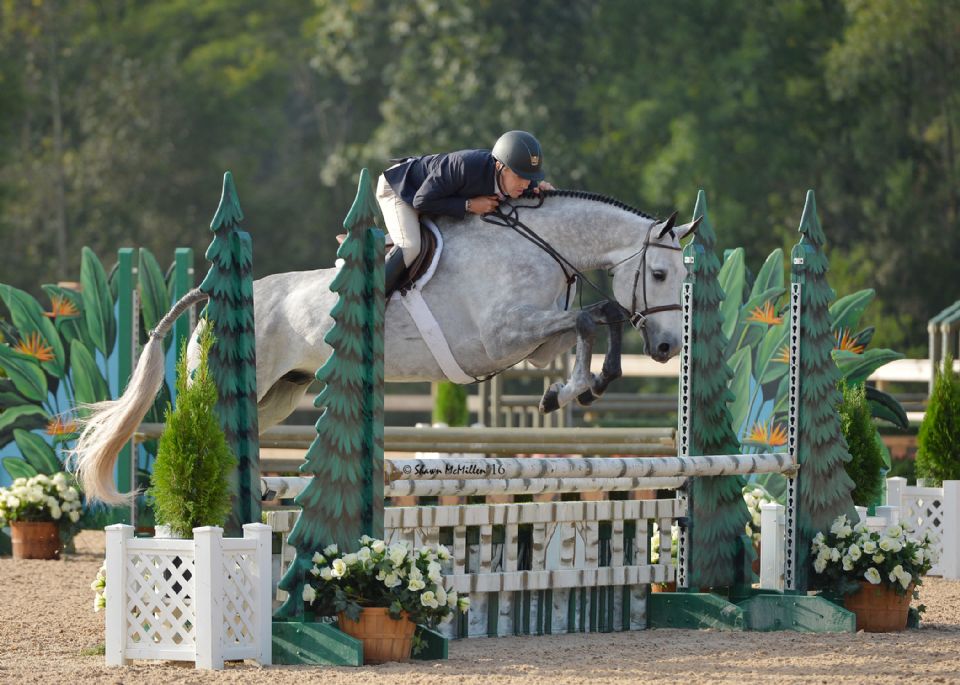 Christopher Payne and Show Me.
Photo by Shawn McMillen Photography 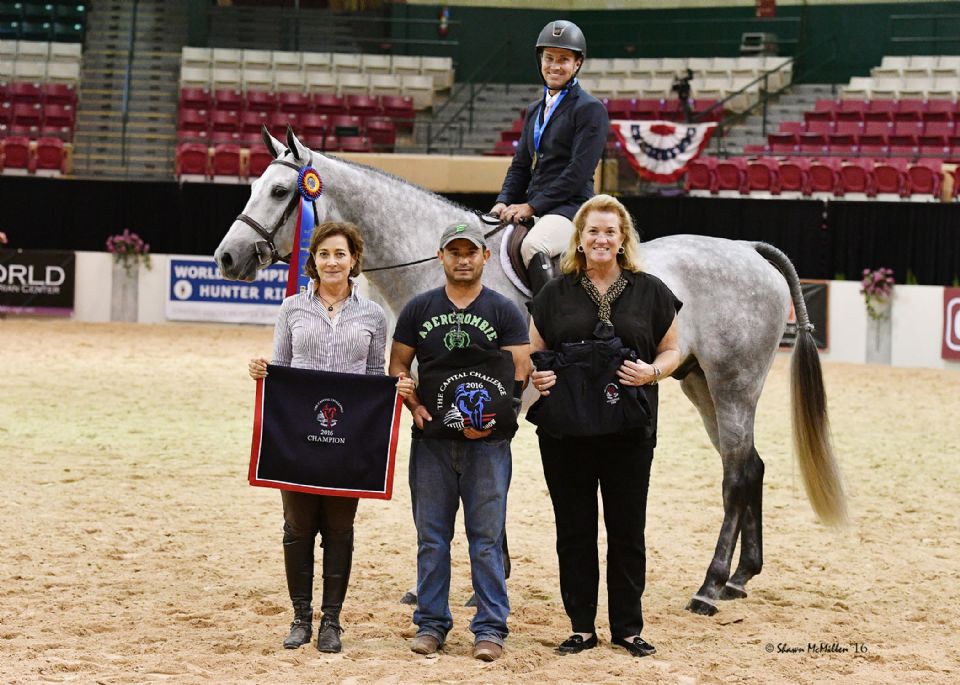 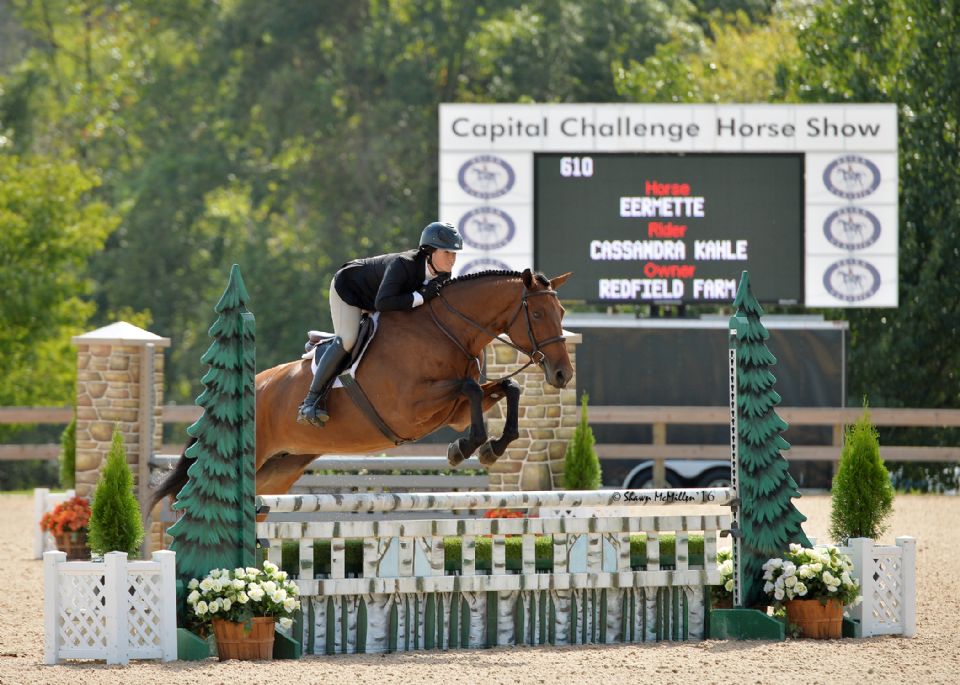 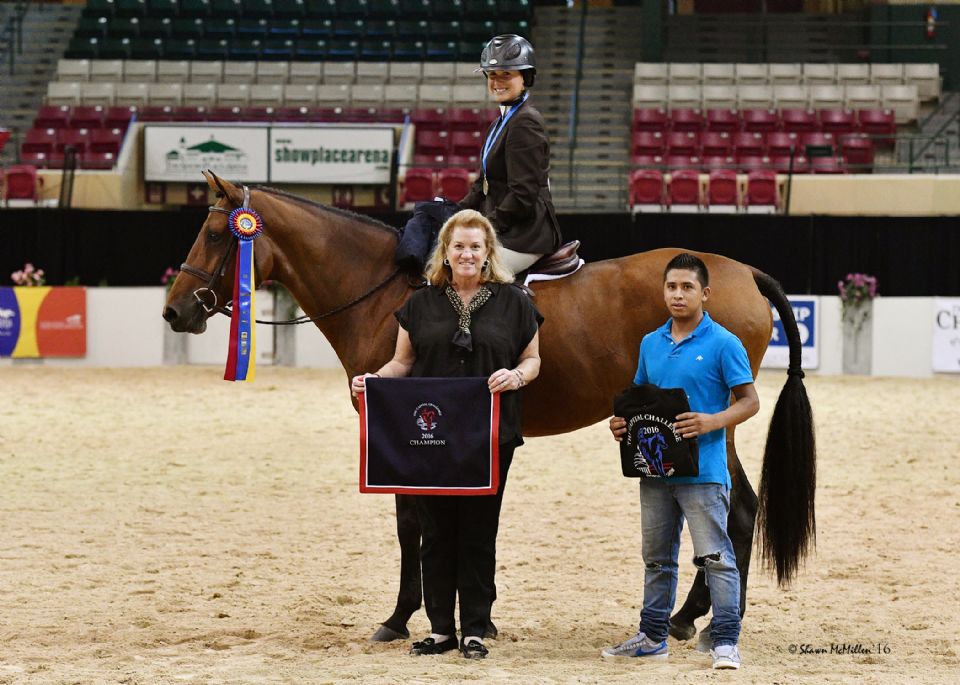 The championship in the Second Year Green Working Hunters went to Catch Me ridden by Scott Stewart of Wellington, FL, for owner David Gochman. Stewart and the nine-year-old Holsteiner gelding came into the day with two first place finishes over fences and a second place under saddle. The pair earned an additional win over fences on Tuesday before claiming the championship. Christopher Payne of Cincinnati, OH, and Truman, owned by Debbie Bass and Maypine Farm, won Tuesday’s Second Year Green Handy Working Hunter Stake and the division reserve championship.

In 2015, Catch Me suffered from a rare case of botulism that nearly took his life, but thanks to the exceptional team surrounding the gelding, he returned to the show ring and has been nothing but a consistent winner since.

“He’s just been really wonderful,” Stewart said. “He’s just such a fun horse to ride. He tries to do it right every time.”

Stewart and Catch Me not only topped the division’s first over fences class of the day, they did so with an impressive high score of 94.

“That felt about as good as he could go,” Stewart said. “He went perfectly. I thought he jumped great, and I thought he really deserved the 94.”

The High Performance Hunter championship, sponsored by Take the High Road LLC, went to Because, a nine-year-old Dutch Warmblood stallion owned by Jane Gaston and ridden by Kelley Farmer of Keswick, VA. Farmer and Because received three firsts and a second over fences. Cameo, ridden by Scott Stewart for Dr. Betsee Parker, earned a first, second and fifth over fences and a second under saddle to take the reserve championship.

Because was purchased by Gaston in early 2016, and the stallion has seen success ever since in both the professional and amateur hunter divisions.

“He’s an amazing horse,” Gaston said. “He gives you any option in the world as far as distances. He shows you things, and whether you’re long, whether you’re deep, he sets himself up for it. The options are endless, and the scope is endless. There are few and far between that are like that. He’s just an awesome horse.”

Farmer rode Because to scores of 91.5 and 90 to take the wins in Tuesday’s classes, and she echoed similar sentiments toward the talented horse.

“What an amazing animal,” Farmer said. “He’s just an unbelievable animal. He’s so much fun to ride – so scopey, so light off the ground.”

In the Performance Hunter 3’6”, the championship went to Hunt Tosh and Gotham, owned by Dr. Betsee Parker. Tosh piloted the eight-year-old Holsteiner gelding to two second place finishes over fences and the win on the flat. The reserve championship went to Peter Wylde and Kingpin for owner Beechwood Stables, LLC.

Gotham has a history of winning at Capital Challenge. Two years ago, with Tosh also in the irons, the pair turned in the highest Future Hunter score of the show with a 91.5 before going on to claim the Future Hunter 3’3” championship and the win in the $25,000 Future Hunter North American Championship.

In the Future Hunter Mares division, sponsored by Penelope Ayers, Cassandre Kahle earned her first Capital Challenge championship aboard Eermette. The seven-year-old Warmblood mare, owned by Redfield Farm and Karen Trione, earned a first and fifth over fences and a second on the flat to take the division title. The reserve championship went to Stellar, ridden and owned by Holly Orlando.

“I’m so thrilled. I had no idea [we would be champion] so it was so exciting,” Kahle, of Califon, NJ, said. “She had a little bit of energy yesterday; she was feeling good. But she jumped really well. I think she was a little bit impressed with the new flowers and the atmosphere here, so she jumped great.”

Eermette was imported from Holland in early 2016 and has slowly eased into her hunter show career with Kahle and Redfield Farm since then.

In the Future Hunter 6 & Over division, sponsored by David Belford, Christopher Payne, New Hope, LLC, and Susan Moriconi, the championship was awarded to Entourage, ridden by Peter Pletcher for owner Legado Farm, LLC. Pletcher, of Magnolia, TX, and the six-year-old Oldenburg gelding finished third in the stake class and took the top call of both of the other over fences classes. The reserve championship went to Louise Serio and Eleventh Hour, owned by Meredith Lipke, after the pair finished second and third over fences and first in the under saddle.

The Future Hunter 5 & Under championship, sponsored by Randy Johnson and Greener Pastures Equine, went to Christopher Payne and Show Me, owned by Susan Moriconi. The five-year-old Zangersheide gelding claimed two firsts and a third over fences. Private Life, ridden by Scott Stewart for his own Rivers Edge, was named reserve champion after earning two seconds and fourth over fences.

Similar to Kahle and Eermette, Payne has been careful not to rush in bringing along Show Me.

“We did a couple of shows here and there, just kind of keeping it low maintenance,” Payne said. “We let him find his way. He’s an amazing jumper, but I wanted to take my time with him because he’s such a brilliant jumper. He needs to not try so hard.”

Payne continued, “He was amazing. The first day or two that he came here, it was raining. He was a little full of himself. We were going to kind of play it by ear and see if he took a deep breath before we committed to showing. As the days went on, he relaxed into the venue and then when around the ring amazing and super relaxed.”

The top honor in the Future Hunter Colts & Geldings, sponsored by Tim and Kelly Goguen, went to Jennifer Hannan riding Best Regards for owner Patricia Fulchino. Hannan, of Wakefield, RI, and the eight-year-old Holsteiner stallion finished first and fourth over fences and first under saddle. Scott Stewart rode Luster to the reserve championship for Rivers Edge after finishing first, third, and fourth over fences.

In the final division of the day, the Future Hunter 3’3”, sponsored by Hunt and Mandy Tosh, the championship title went to the sponsor himself, Hunt Tosh aboard Chicago. Tosh, of Milton, GA, and Chicago, owned by Douglas Wheeler, finished first, second and third over fences and third on the flat.

Prior to competing in the Future Hunters at Capital Challenge, Tosh and the eight-year-old Warmblood gelding finished third at the highly-competitive United States Hunter Jumper Association (USHJA) Pre-Green Incentive Championships.

“He went beautifully,” Tosh said. “He’s just been fabulous all year. He was great at Pre-Green Incentive; we’ve been really lucky. He’s a blast to ride. He’s super scopey and straightforward.

“We bought him from Emil Spadone, and Emil told me not to mess up and that if I didn’t mess up, he would go well!” Tosh said.

For so many professional hunter riders, including Tosh, the Future Hunter divisions at Capital Challenge provide an ideal opportunity to test their young, up-and-coming horses.

The Future Hunters will also return to the show ring for head-to-head competition in the $25,000 Future Hunter North American Championships, sponsored by the Wheeler Family and Madison Hills Farm, and the Grand Future Hunter Champion will be crowned.

Spectators and fans are invited to engage in the competition and give back to the USHJA Foundation during both challenge classes through the Foundation’s ‘Hunter High Score Challenge.’

During the WCHR Professional Challenge and the WCHR Developing Professional Challenge, every score of 85 or above from each panel will constitute a ‘high score.’ Spectators can pledge a dollar amount for every high score earned in the class to make a charitable donation to the USHJA Foundation. Those wishing to participate can text the word HUNTER to 91999, click the link that is texted back and complete the simple form on their phone.