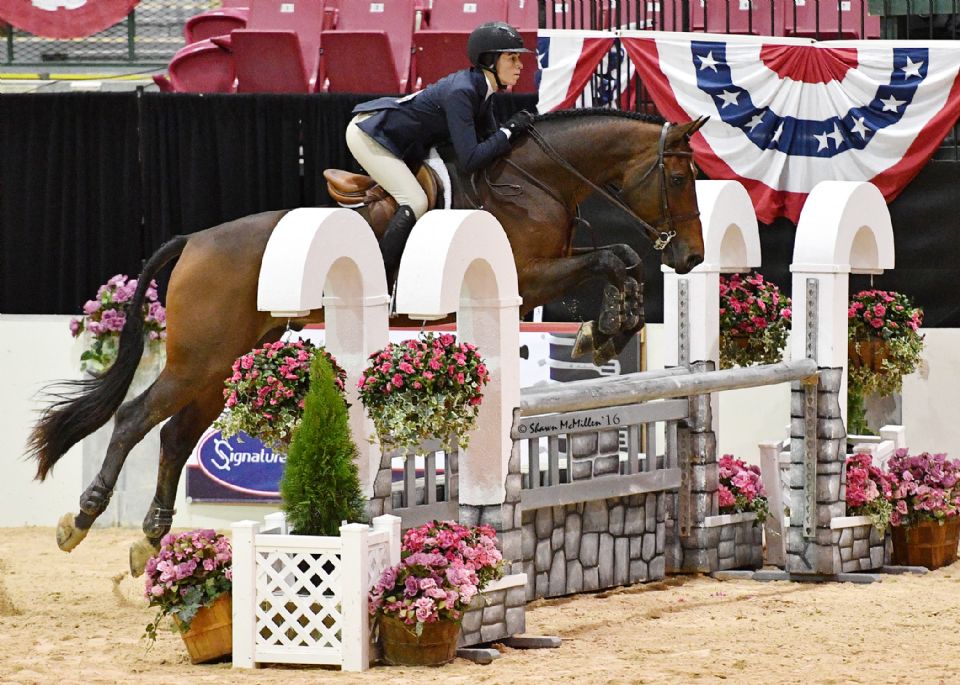 Sophie Simpson of Wellington, FL, rode to the 17-Year-Old Equitation Championship on You Wish.
Photo by Shawn McMillen Photography 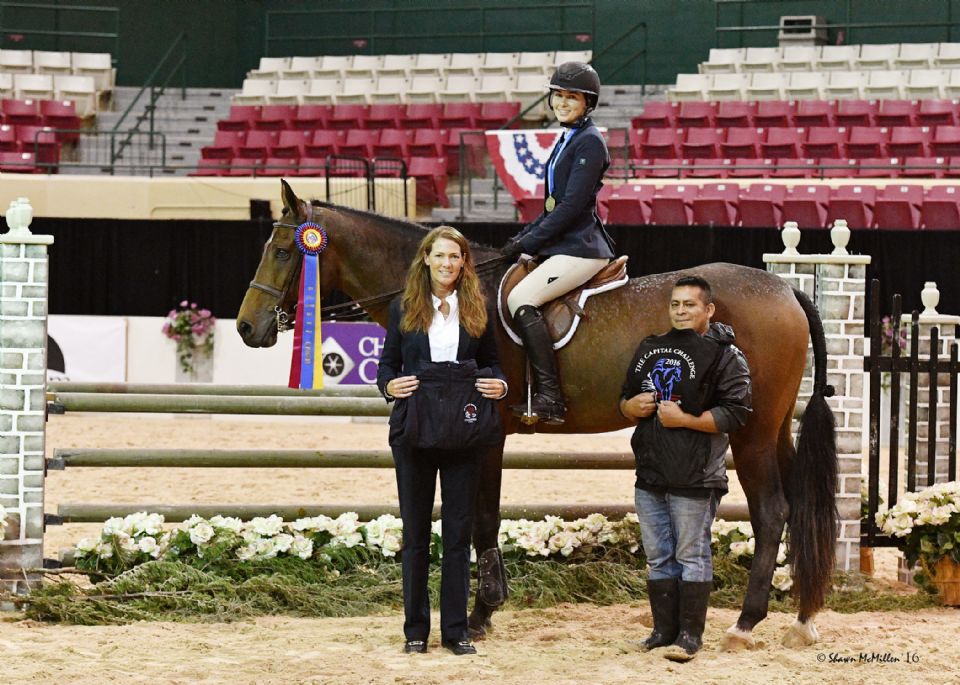 Sophie Simpson and You Wish.
Photo by Shawn McMillen Photography 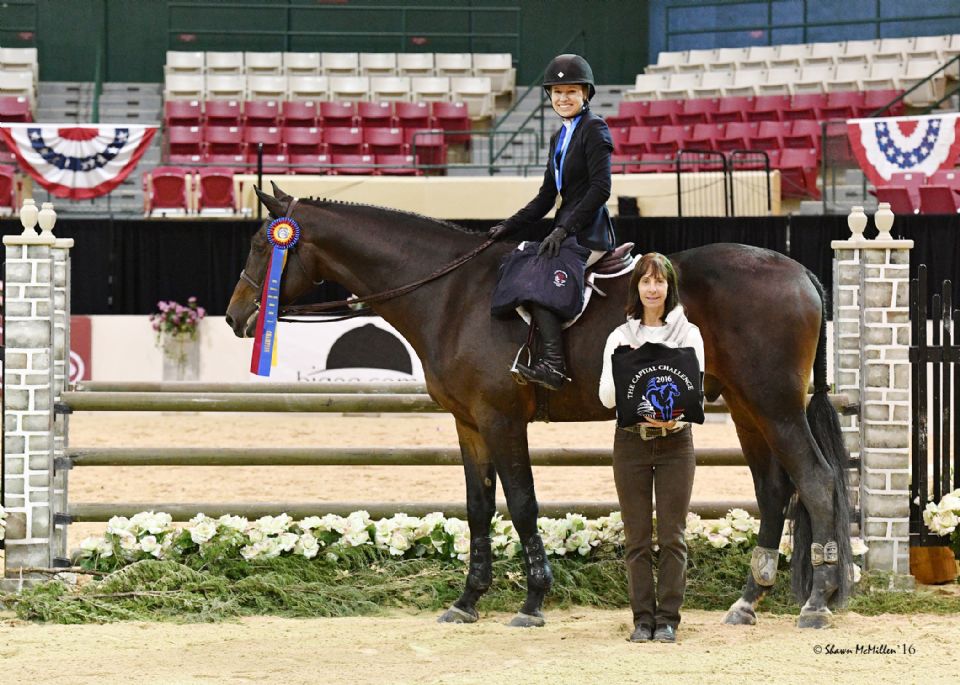 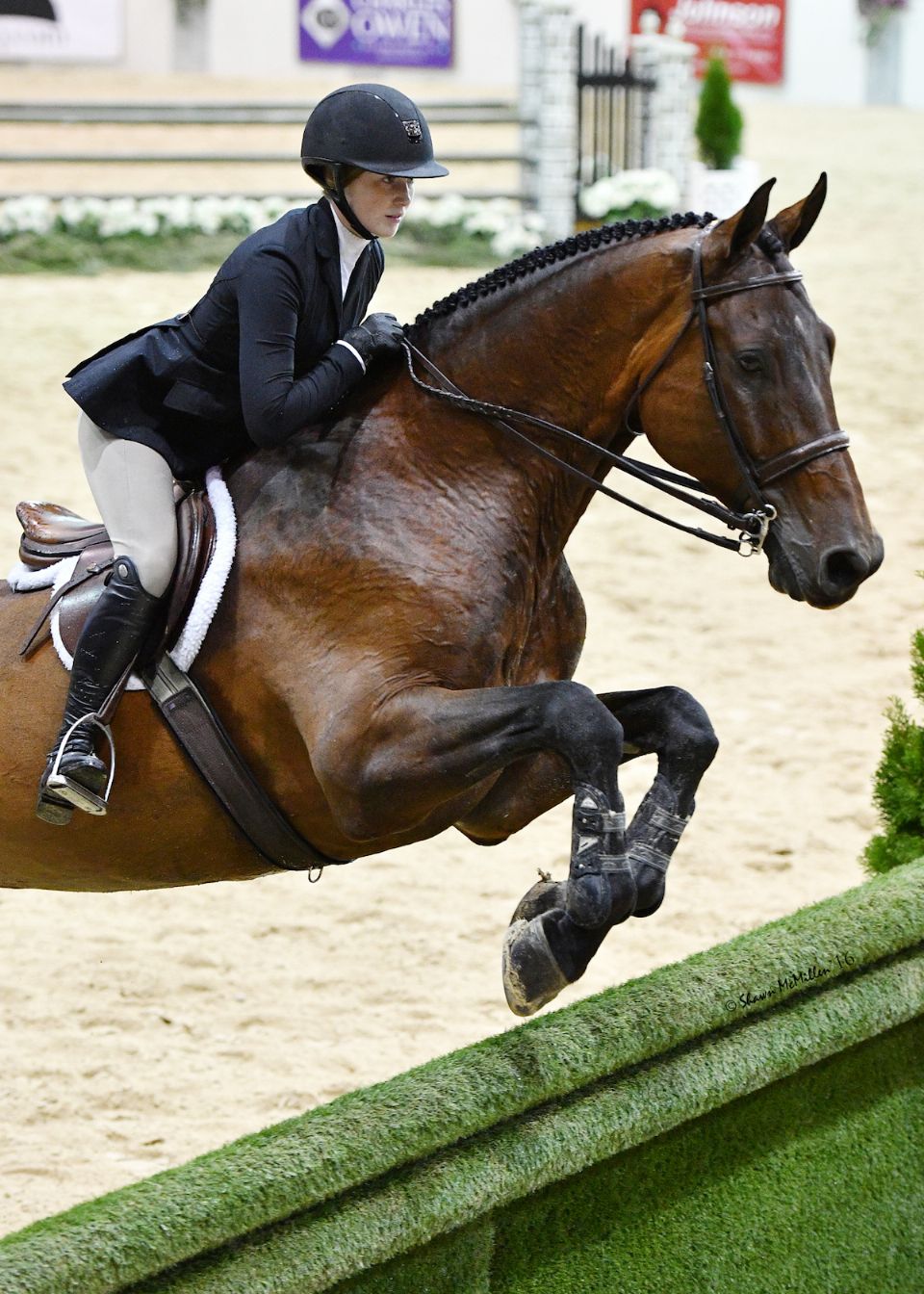 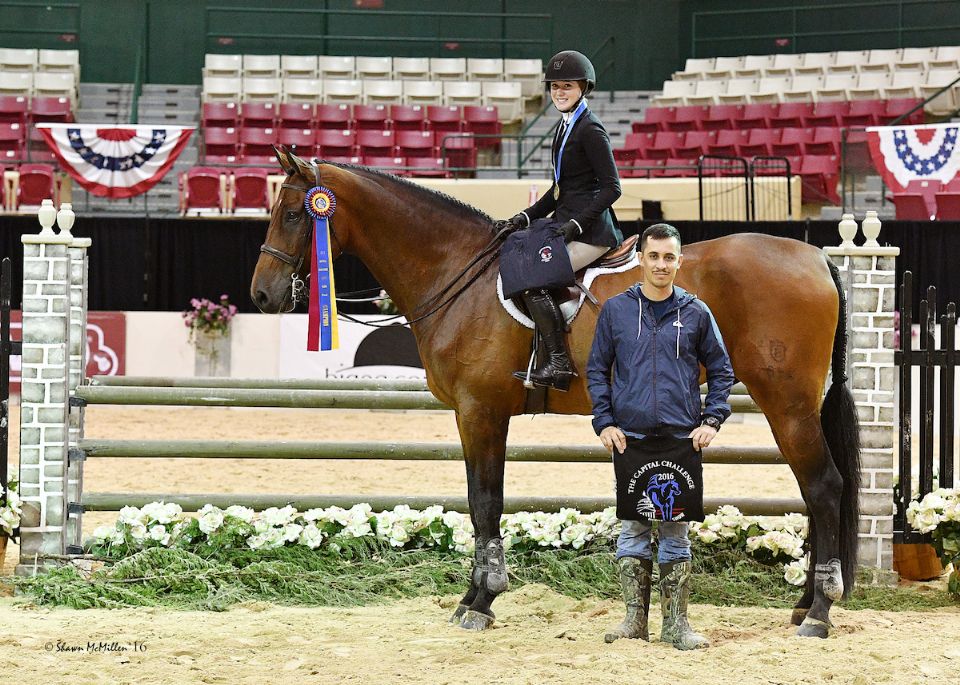 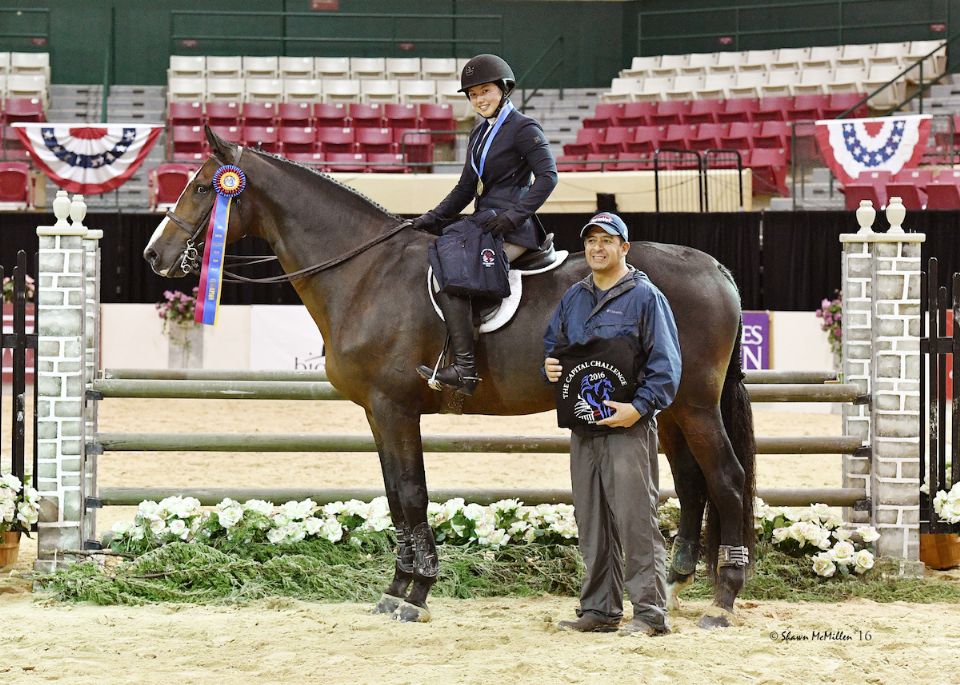 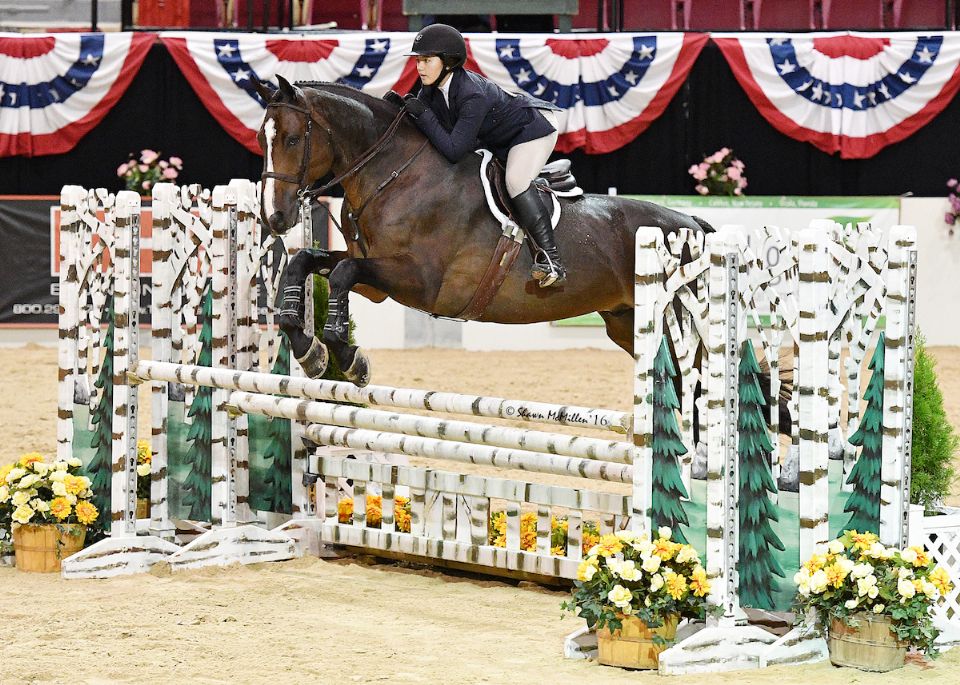 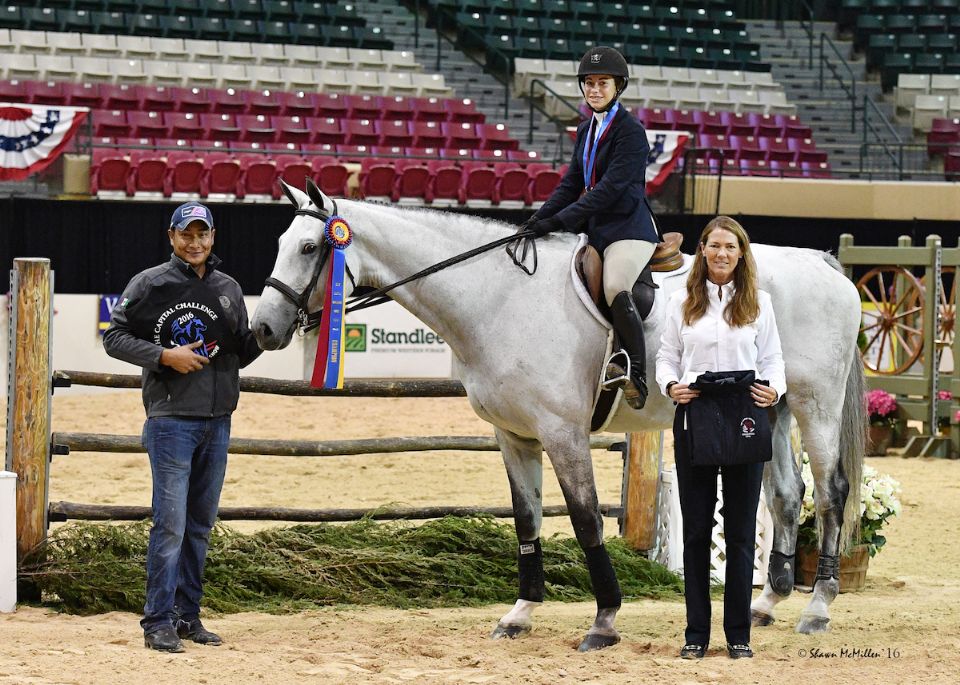 Catalina Peralta accepts the championship award for the 12 & Under Equitation.
Photo by Shawn McMillen Photography 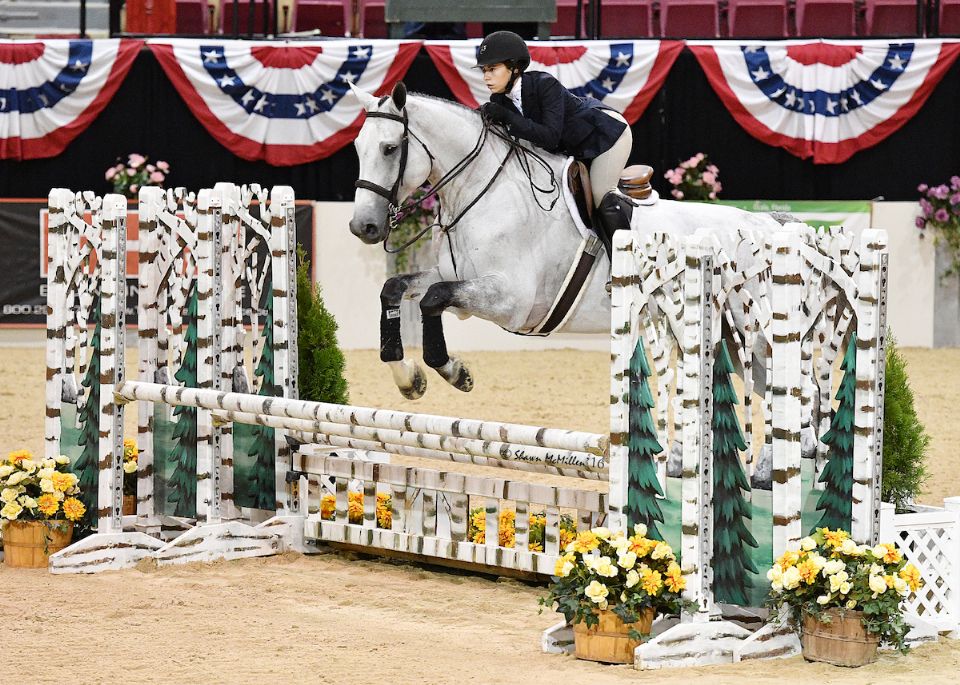 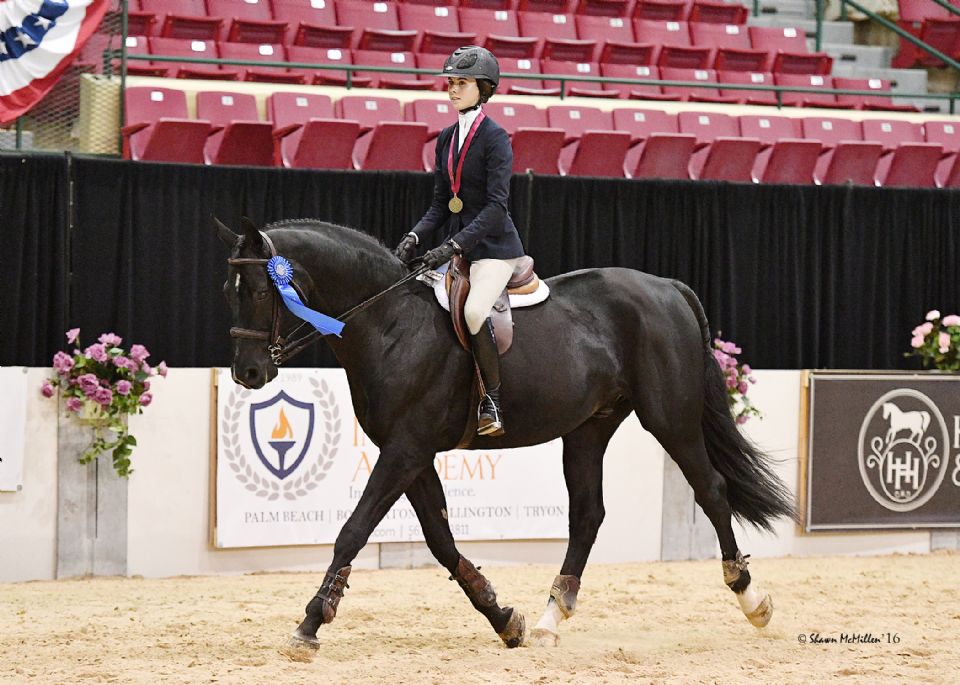 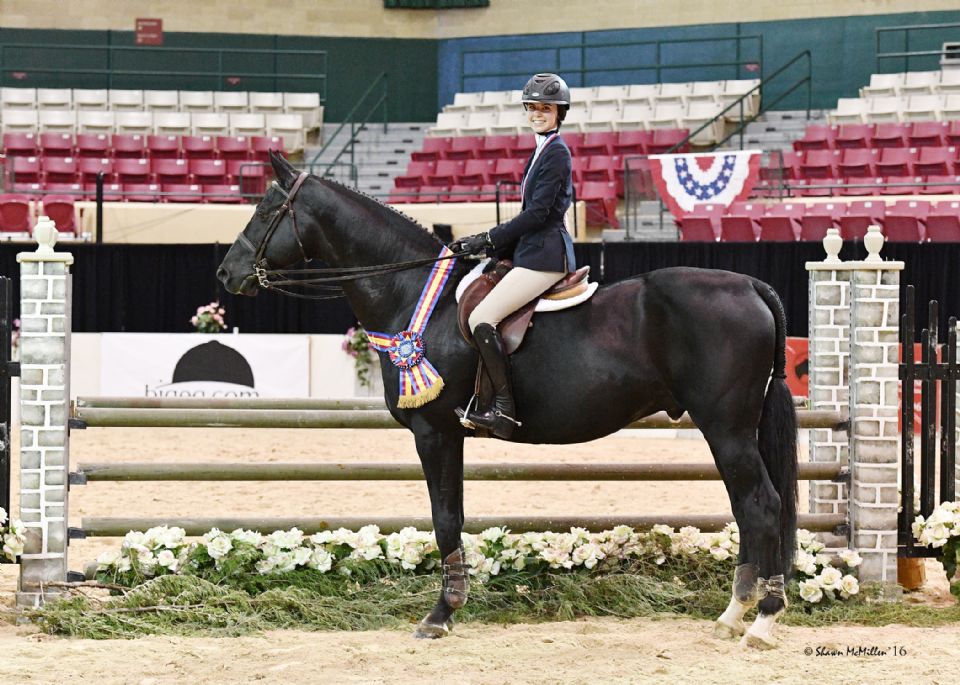 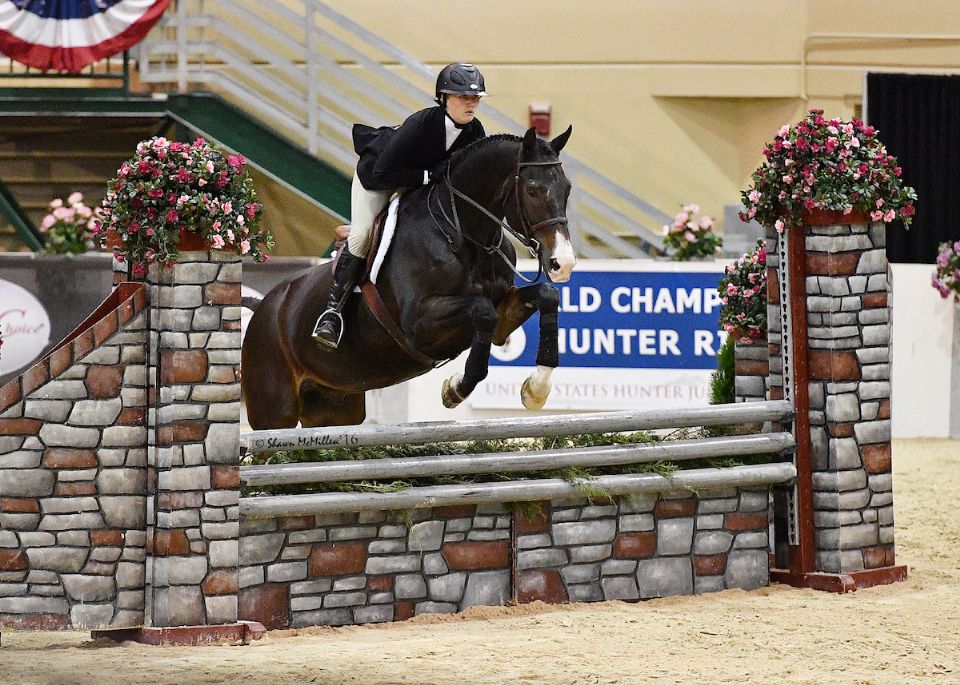 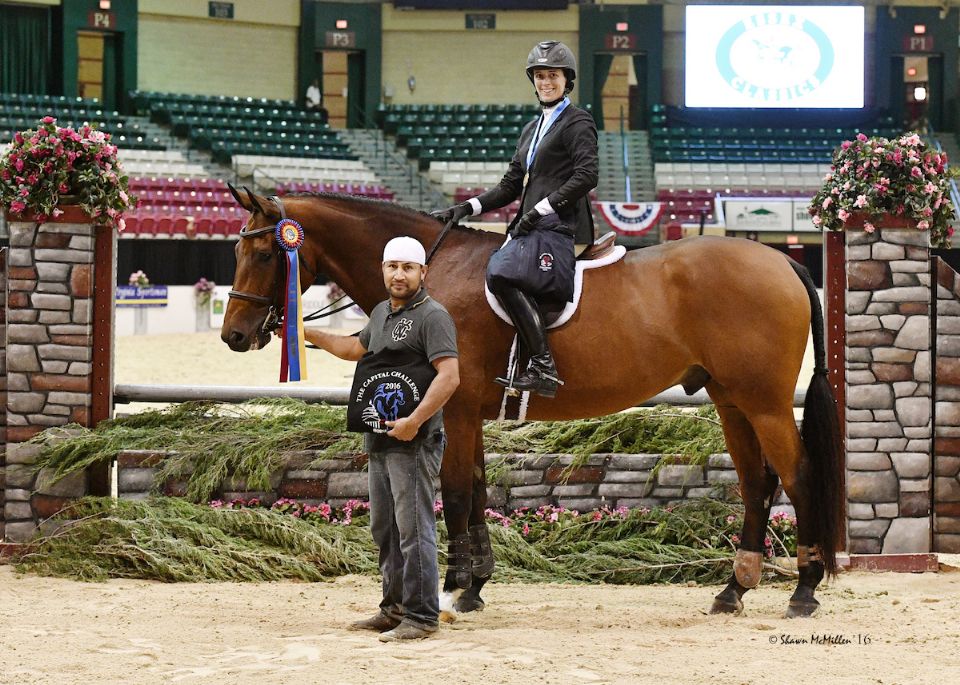 Riders in each of Saturday’s equitation divisions competed in two over fences classes, one held outdoors and one indoors, as well as an indoor flat class prior to the naming of the division champions.

The 17-Year-Old Equitation division championship, sponsored by Old Salem Farm and Frank Madden, was awarded to Sophie Simpson of Wellington, FL, and You Wish, owned by Ashland Farms. The pair finished first and fourth over fences and third on the flat. The reserve champion was Katherine Strauss riding Canterbury.

Simpson, who trains with her mother, Nicki Simpson, and Ken and Emily Smith of Ashland Farms, just started riding You Wish about two months ago, immediately after the 10-year-old Oldenburg gelding was imported from Europe.

“His first show as an equitation horse was the Hampton Classic, and this is his first indoor start,” Simpson said. “He’s so awesome. He’s just got a great brain. He’s just really been so super easy to do. Everywhere that we’ve gone so far, he’s been great.”

Saturday’s competition marked not only You Wish’s indoor debut, but also Simpson’s first visit to the Capital Challenge Horse Show. As she concludes her final junior year, Capital Challenge presented the perfect opportunity for her and You Wish to gain extra mileage together in the equitation ring before the remaining equitation finals.

“It’s been obviously a nice experience so far!” Simpson said. “For the first equitation indoors for this horse, for getting to know him a little bit more, and for tweaking a couple of things, it’s really a great experience.”

Lolly McLellan of Ashland, OR, was named the 16-Year-Old Equitation Champion, riding Rockford to a first and fourth over fences and competing Contelido on the flat. The reserve championship in the division was shared by Jordan Stiller of Needham, MA, on A Picobello Star Z and Louisa Brackett of Grayslake, IL, on Efendi.

“Rockford was great,” McLellan said of the 17-year-old Warmblood gelding who she has owned for three years. “He likes to show. He’s kind of a show pony. He goes in the ring, and he puffs up his chest. He loves to win. He’s always so good to me in the ring.”

With her home base in Oregon, this year marks McLellan’s third time competing on the East Coast and her first time at Capital Challenge. McLellan trains with Wendy Krohn while in Oregon, and she began training with Stacia Madden and Max Amaya on the East Coast following this year’s Winter Equestrian Festival [WEF].

“I can’t say enough about how wonderful my trainers are,” McLellan said. “On both the East Coast and the West Coast, they’ve really been great.”

The championship in the 15-Year-Old Equitation, sponsored by Suave Pony and Limelight Farm, went to veteran Capital Challenge winner Emma Kurtz of Hudson, OH, aboard Clearway, a mount who has also seen great success at the Prince George’s Equestrian Center. Kurtz and Clearway, owned by Betsee Parker, finished first and second over fences and second on the flat. The reserve championship ended in a tie between Grady Lyman of San Diego, CA, on Titan Des Chenes and Madison Goetzmann of Skaneatles, NY, on Stallone.

“[Clearway] was perfect,” said Kurtz, who last year earned the 13 & 14-Year-Old Equitation championship on VIP Z. “I started riding Clearway right at the beginning of Florida. He’s incredible. He has the best canter. He’s just so much fun.”

Kurtz currently trains with Amanda Lyerly and Mike Rheinheimer of Madison Hills Farm, as well as with Scott Stewart and Ken Berkley. This year marks her fourth year competing at Capital Challenge, where, in addition to her equitation success, Kurtz has earned Junior Hunter and Large Pony championship titles.

“We like it here,” Kurtz said. “It’s nice because you get a mix of indoor and outdoor. You don’t just get thrown right into indoor season; you get a nice transition.”

Kurtz and Clearway will return to the ring on Sunday for the Private Tutoring Services North American Junior Equitation Championships before setting their sights on the remainder of the indoor circuit.

“I would love to be top ten in a couple of the equitation finals,” Kurtz said. “I haven’t before, so I think it would be really cool.”

Cohen has spent the past year training with Stacia Madden and the team at Beacon Hill, and she was thrilled with the positive start to the indoor equitation season.

“I’ve never done the age group equitation so winning feels great,” Cohen said. “It’s really boosting my confidence. Capital Challenge is a great show to prepare. I love everything about this show. It’s such a great space. I love how, especially in the age group equitation, we get to do one class outdoors and one class indoors. Today is great preparation for tomorrow’s big class [the Private Tutoring Services North American Junior Equitation Championships].”

When Cohen returns to the ring on Sunday, she will again be aboard Trump, an eight-year-old Dutch Warmblood gelding that she has owned for the last two years.

“He’s very special to me,” Cohen said. “When I got him he hadn’t done any equitation. So I’ve kind of grown with him and really learned the equitation with him. He is amazing. He is such a funny horse. He has such a personality in the barn, but definitely when he goes in the ring he knows when it’s time to step it up.”

The champion in the 12 & Under Equitation, sponsored by Caraneen Smith, was Catalina Peralta of Geneva, FL, riding Capito, owned by Arnoud Dobber. Peralta finished first on the flat and third and seventh over fences. The reserve championship in the division went to Sophie Gochman riding VIP Z and Alonso.

This time, Peralta’s victory came aboard a relatively new mount for her, as she just started riding Capito this summer.

“This is his first year doing the equitation. He used to be a jumper,” Peralta said of the nine-year-old gelding. “He’s owned by Arnoud Dobber who had the idea that maybe he could become an equitation horse. He sent the horse to my mom [Wendy Ritter Peralta] and dad [Ezequiel Peralta] to learn the ropes of equitation a little bit, and I started working with him because I ride a lot of horses at home.”

Peralta continued, “We always knew from the moment that I got on he was going to be a pretty good equitation horse. He has a great personality. He’s very goofy; he’s not like a lot of other equitation horses who can sometimes have dull personalities.”

Following the conclusion of the age group equitation divisions, the top three ribbon winners in each of the flat classes were invited back for the North American Flat Equitation Championships. After extensive testing both directions of the ring, the flat championship title was presented to Ransome Rombauer of Saint Helena, CA.

“I love flatwork. Gaston and I are flatting queens!” Rombauer said of her 15-year-old Czech Warmblood mount. “This is my first time bringing Gaston east. I wanted to bring him because it is my last junior year, and we have a really special relationship. He was amazing.”

Riders in the North American Flat Equitation Championships all compete on the rail until, one-by-one, they are ranked and called into the center of the ring in descending order of their placings. On Saturday it came down to Rombauer and last year’s class winner Emma Marlowe of Lake Balboa, CA.

“I love the format. It is so fun when they call the people in,” Rombauer said. “It’s very motivating. I didn’t even know I had made it so far until they called in the third place, and I realized ‘oh it’s just me and Emma!’ We’re friends; we are both from California, and we show together.”