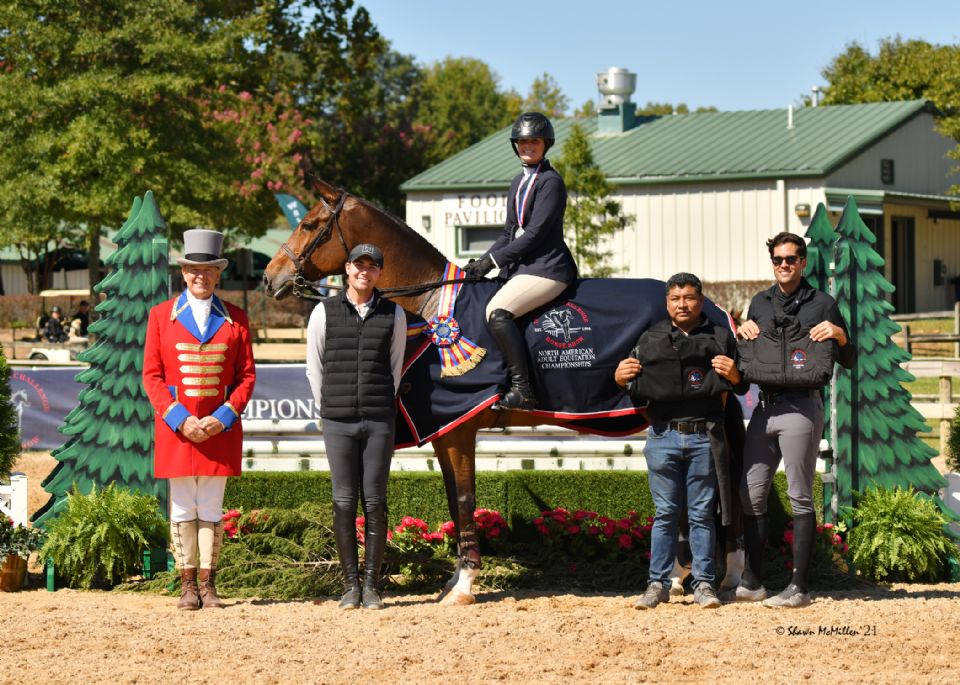 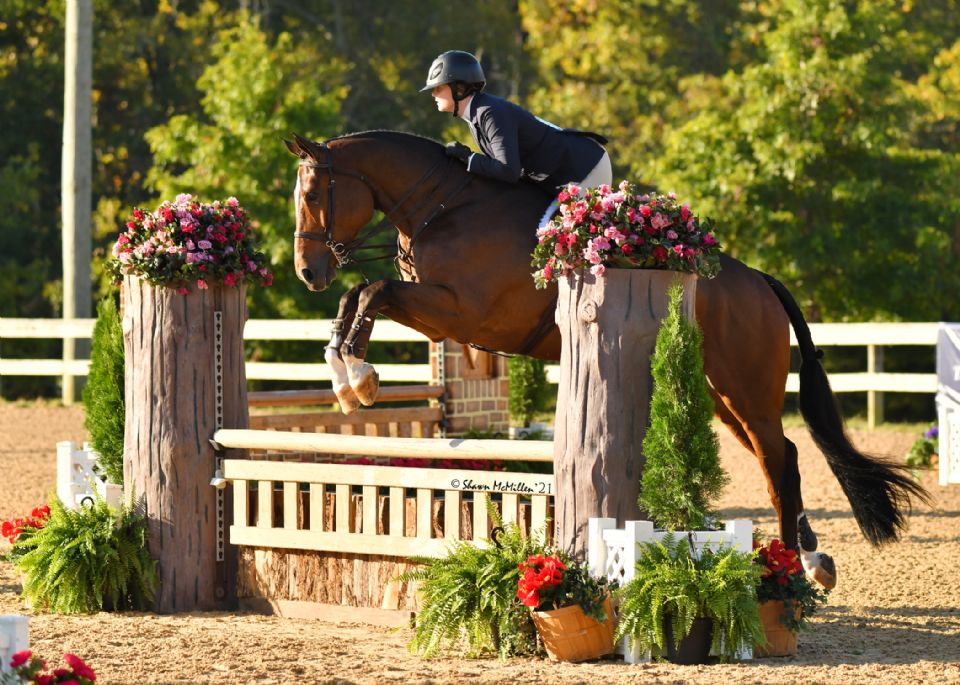 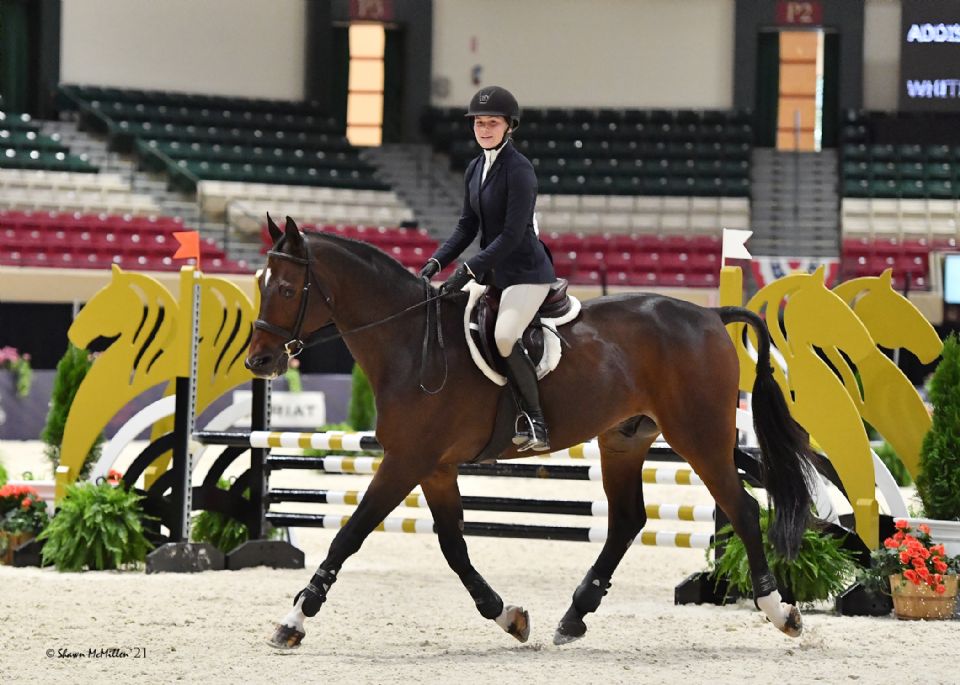 From a field of 26 entries, a score of 87.66 over the Joseph Carnicom-designed first round course put Stevenson and Audi 2000 Z, owned by Missy Clark’s North Run and Robert Gierkink’s Kadley Farms, LLC, at the top of the leaderboard going into round two. The pair’s second-round score of 85.66 solidified the win with an overall score of 173.32.

Second place with scores of 84.16 and 85.66 for a 169.82 total went to Jaden Olson of Parker, Colorado, riding her own Conradical. Anna Koenig of Hollywood, Florida, and Constantin, owned by Ashland Farms, rounded out the top three with an overall score of 169.00.

“Today has been an amazing day!” said Stevenson. “I recently paired up with Audi 2000 Z through my trainers, Geoffrey Hesslink and Brendan Williams, and it’s been absolutely incredible. Missy Clark and Kadley Farms were so nice to let me have the ride on him for Equitation Weekend and [the upcoming] Ariat [National Adult Medal] Finals. He’s only seven, so we wanted to give him a great experience before going into the indoor later next week. I was so impressed with him today. He felt like a real veteran, and I felt like I was riding the winner.”

Growing up, Stevenson was a successful competitor on ponies and horses, but hadn’t clinched a win of this magnitude until now.

“Going into the second round [in the top spot], obviously I had a lot of nerves,” Stevenson continued. “I’ve never been in this position before, and this is only my second year showing at Capital Challenge. So, to not only make the second round but to lead going into it, I just wanted to hold myself together, keep composure, and give the horse the ride and the ribbon that I thought he deserved today.”

The win was that much sweeter for Stevenson who was a self-proclaimed equitation nut and Missy Clark fan from an early age. “I recently found a school journal from when I was 10 years old where I had written about Missy being the best trainer and about all the people she’s trained,” she laughed. “It’s so funny that when Geoffrey [Hesslink] presented me with the opportunity to ride Audi, Missy was one of the owners.”

Stevenson is quick to acknowledge a true team effort that helped her achieve the win, including her trainers, the horse’s owners, and the horse’s groom, Armando Potillo.

“I’ve ridden Audi about three times, so Geoffrey and Brendan [Williams] have done such a great job getting to know him quickly,” she shared. “I was just trying to do my homework at home so when he showed up ready, fingers crossed, I was, too.

“I’ve been so fortunate to have some amazing owners let me ride their horses to gain experience for myself and, oftentimes, to help horses gain experience as well,” she concluded. “To have a chance to do it and have some success like this is sort of mind boggling—it’ll take a while to process it.”

Keyworth and her own Liam topped the flat phase with a high score of 91 and then earned a score of 88 to finish third in the gymnastics phase. With all gymnastics phase scores multiplied by a coefficient of 1.5 before being added to each riders’ flat phase score, Keyworth currently sits at the top of the class with an overall score of 223.

“It feels like a lot of hard work paid off,” explained Keyworth. “I’ve had Liam for four years. He’s my absolute best friend and it feels so nice to have done this with him. He’s really my everything; he is such an amazing horse.”

Keyworth, who trains with Jill Curtis at Larimar Show Stables, looks forward to competing in this class every year and is thankful to be contesting the year-end final at Prince George’s Equestrian Center along with a great support system that includes her trainer, mother, and grandparents.

“This event has been one of my favorite classes to do at any horse show,” commented Keyworth. “Competing here has been a goal for me. I loved it last year—I loved the different phases and everything about it. It feels really, really good to be here again and succeed.”

Paige Walkenbach, of Paradise Valley, Arizona, piloted Theresa Boucher’s Quadro D’Ag to a score of 90 and the blue ribbon in the gymnastics phase.

“My horse and I have worked really hard this year so it feels great,” said Walkenbach, who trains with Elvenstar Farm. “I got him in March this year, so I haven’t had him very long. I live in Arizona and he lives in California, so we have been getting to know each other at the shows. He is such a good boy.”

Walkenbach gives a nod to her trainers for helping her prepare before she steps in the ring with Quadro D’Ag. “I like to make sure that I have a good mindset before I go in the ring, so I talk with my trainers a lot throughout the course walk,” continued Walkenbach. “My trainer Jim [Hagman] always tells me to have patience during the course walk so I can have more time to look over the track.”