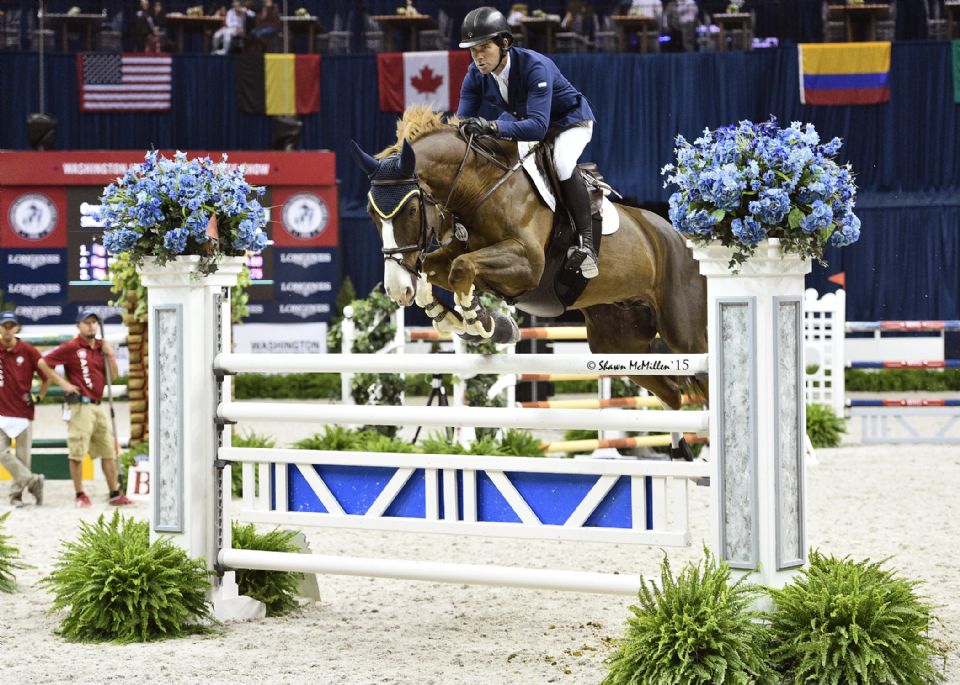 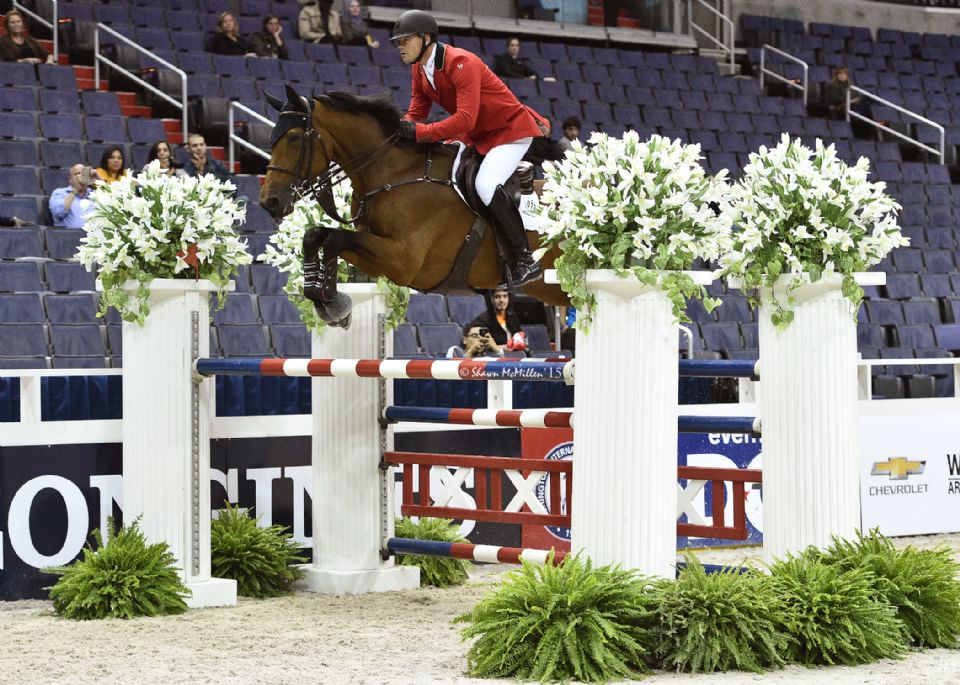 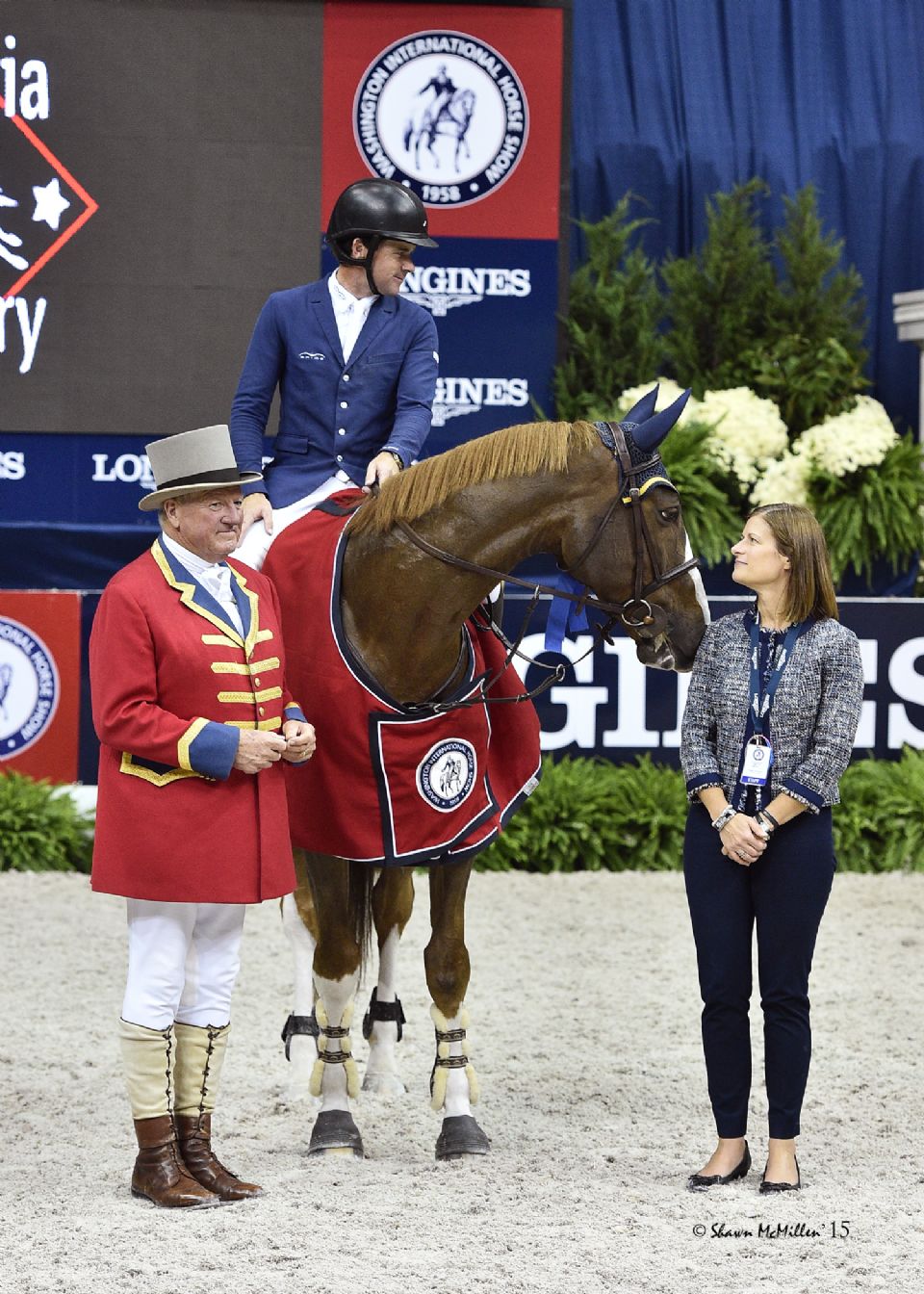 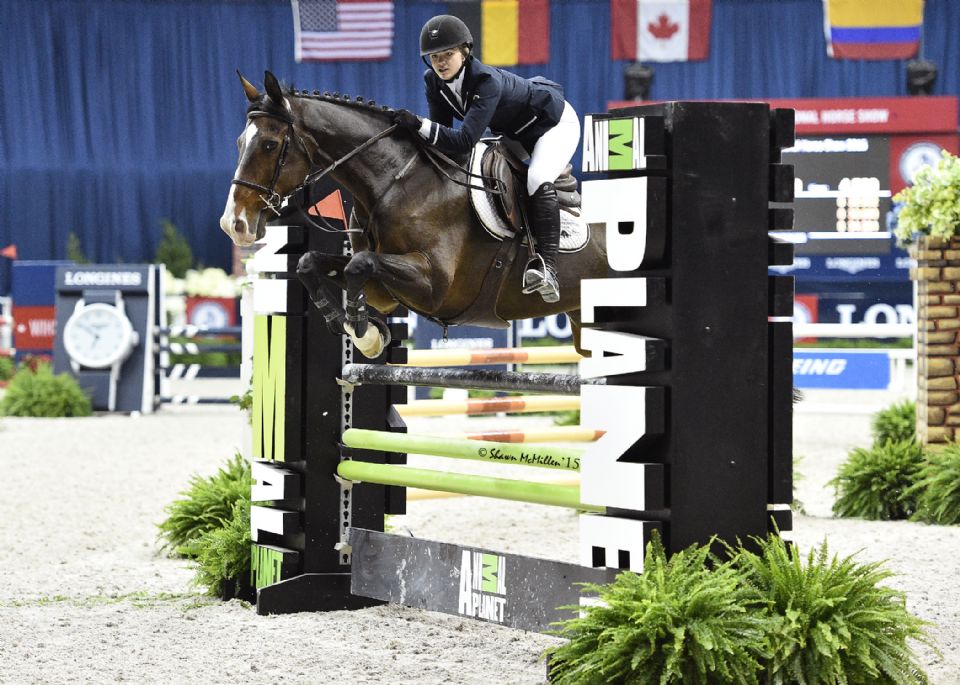 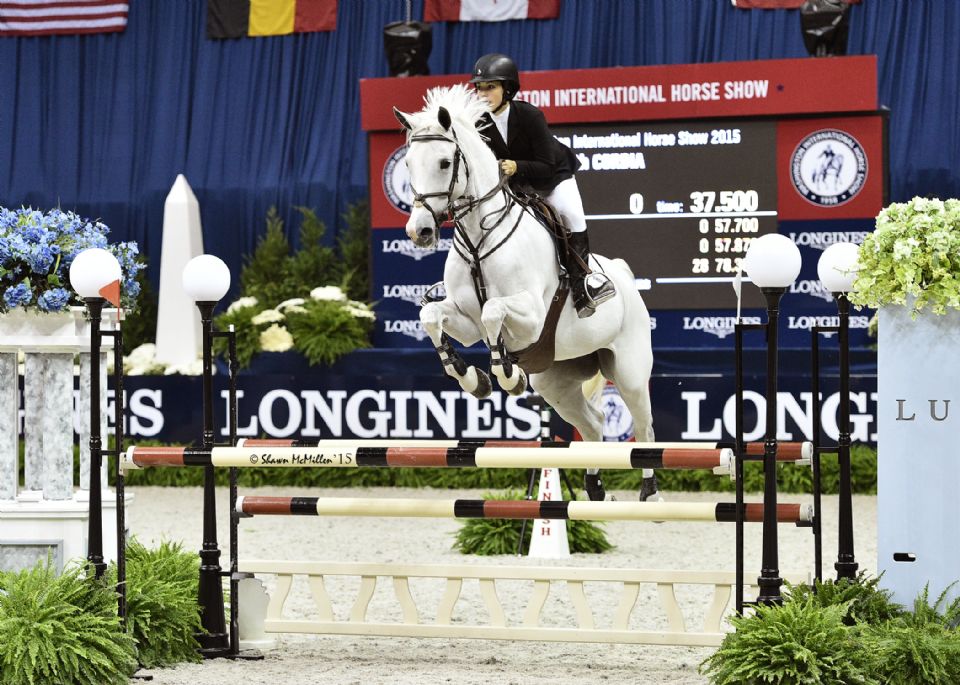 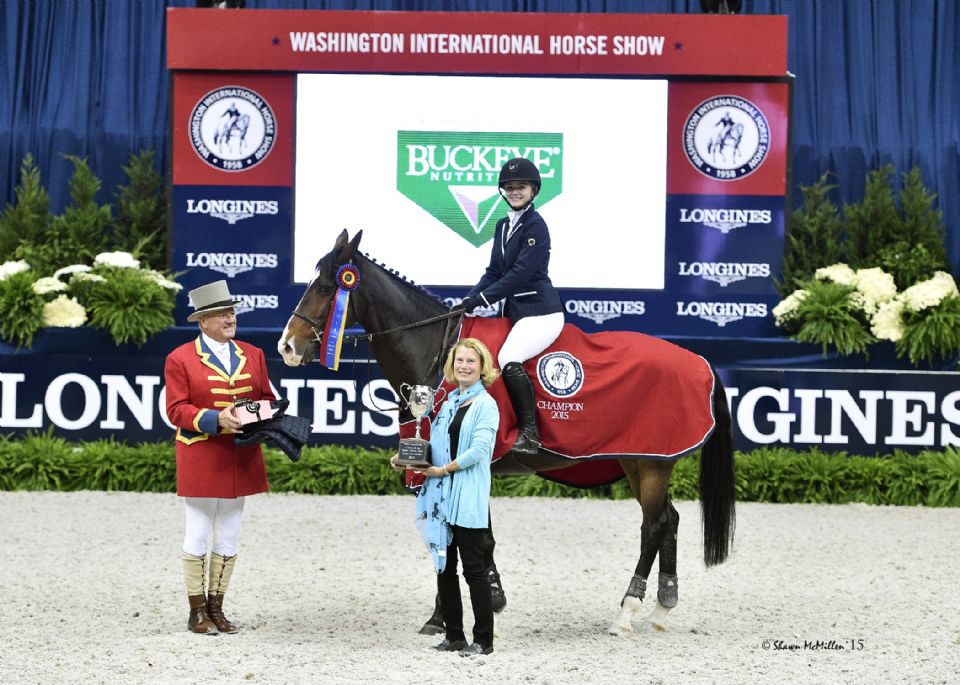 Katy Hamilton and Sacha 12 in their winning presentation.
Photo by Shawn McMillen Photography 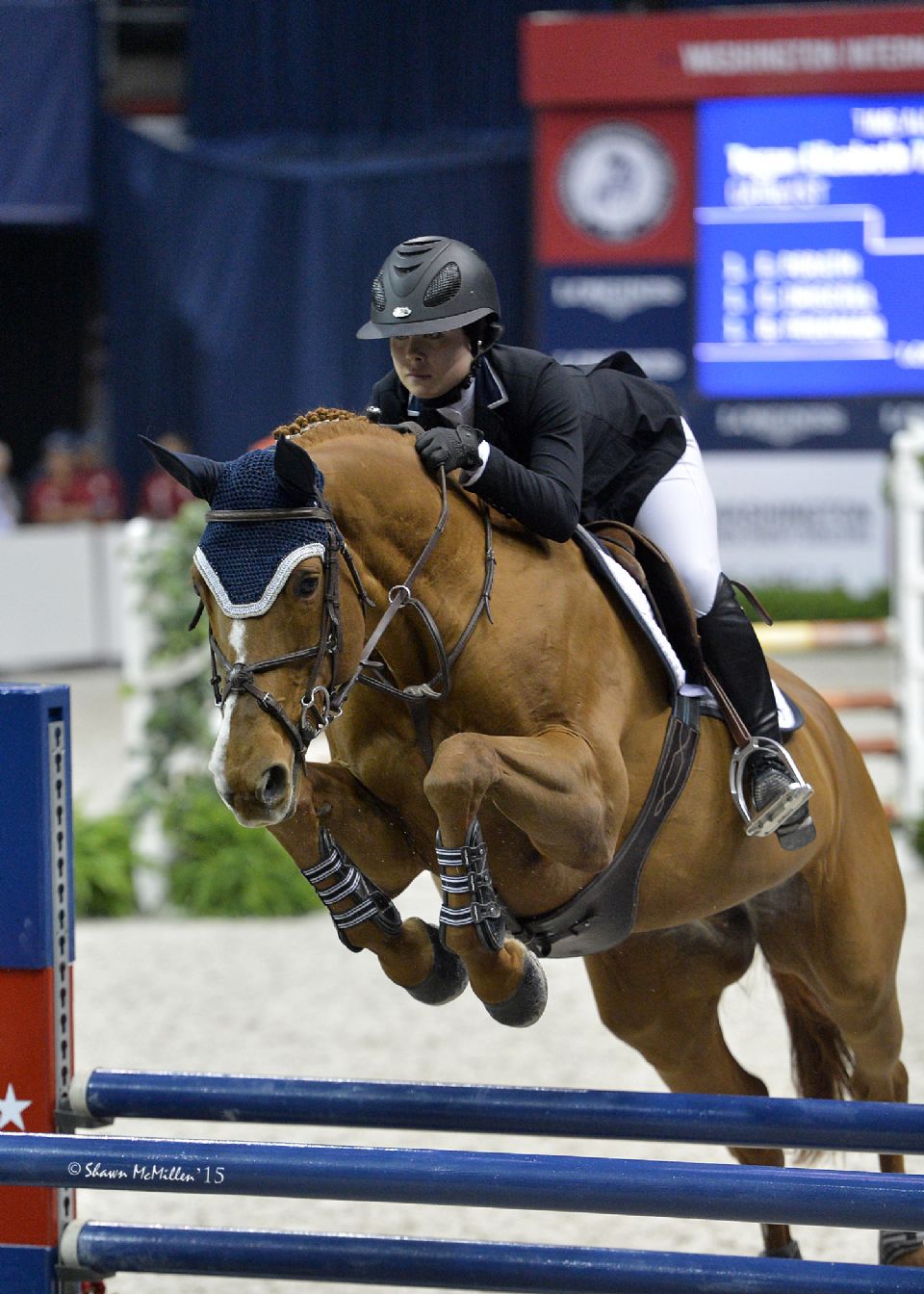 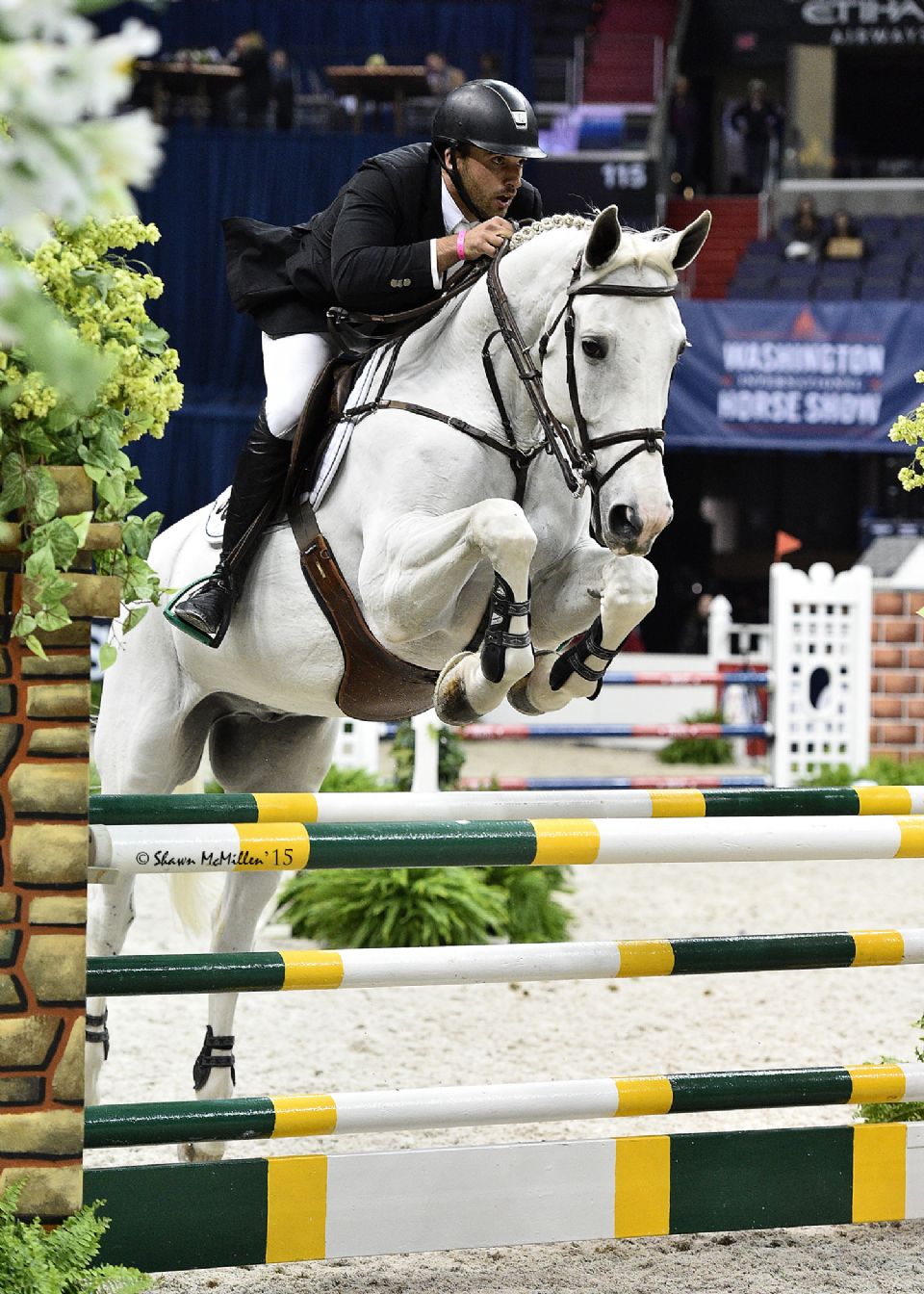 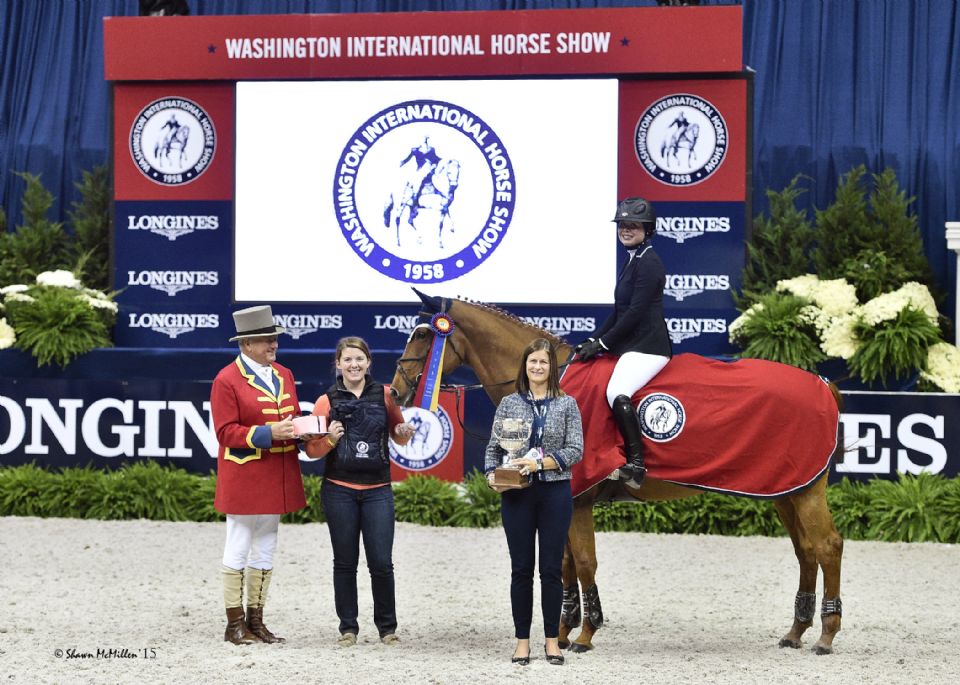 The 2015 Washington International Horse Show (WIHS) hosted its first day of jumper competition at Verizon Center in Washington, D.C. on Wednesday with a win for Ireland’s Conor Swail and Simba de la Roque in the feature $10,000 International Jumper speed class, sponsored by Amalaya Investments. The $10,000 WIHS Children's and Adult Jumper Championships were also highlighted with a win for Katy Hamilton and Sacha 12 in the $10,000 WIHS Children’s Jumper Championship, sponsored by Shamrock Ventures, and victory for Tegan Elizabeth Treacy and Catalyst in the $10,000 WIHS Adult Amateur Jumper Championship. WIHS continues through Sunday, October 25, featuring hunter, jumper, and equitation highlights.

Swail and Simba, a nine-year-old Selle Francais gelding (Kannan x Allegreto), have been on quite a roll recently. “It has been since I got him really,” Swail noted. “He has won a class at every single show he has jumped at. It is phenomenal what he is doing and what he continues to do. I have been using him sparingly, but every time he goes, he wins. It seems like he has been around a lot, but he has had good breaks as well. I do not know what to say about him anymore, he is just such a good horse.”

Latest wins include last week’s Pennsylvania National Horse Show in Harrisburg, PA, and a victory at the Rolex Central Park Horse Show in New York City just before that. For Wednesday’s win, the pair had the luck of the draw on their side at the end of the class.

“I had already been in with one horse and she jumped a great round. It gave me an idea about the winning time and what it took to win,” Swail detailed. “It was not my intention to go particularly fast on him, but I thought if I did the numbers and a few tight turns, there was a class there for the taking and as usual he did not let me down. He was phenomenal. It felt very comfortable for him.”

This is Swail’s second time competing at WIHS and a great start to the week for Simba de la Roque as he contests some bigger classes in the coming days.

“This is a beautiful setting in the middle of the city and a great stadium with good footing,” Swail stated. “It is  great to come here and compete against the best riders. Simba has a big step, but at the same time he is quick on his feet and quick in his mind, so it seems that he is taking to the indoor circuit well. He is fast across the ground, so he works well on both a big surface and a small surface, which is great. It makes him adaptable and durable for where you want to go and what you want to do.”

Jumper competition got underway early Wednesday evening with a win for Katy Hamilton in the $10,000 WIHS Children's Jumper Championship, sponsored by Shamrock Ventures, aboard Sacha 12, owned by Old Barrington, LLC.

Hamilton, 16, trains with Amelia McArdle at Old Barrington Farm and hails from Chicago, IL. The original field included 32 and Hamilton was one of 12 to advance to the jump-off, besting six double-clear efforts in 32.38 seconds for the win.

Hamilton's only goal for 2015 was to qualify and compete at the Washington International Horse Show with Sacha 12, but winning was an accomplishment she never dreamt could happen. For the victory, she was awarded The H. Fenwick Kollock Memorial Perpetual Trophy, donated by Friends of Fen.

“It's all really unreal; seeing horses in the streets, the schooling area inside [Verizon Center] and traveling as far as we did. I've been shaking the last couple days because I was so nervous,” said Hamilton, who made an 11-hour trip for her first-ever WIHS appearance. “I'm confident in Sacha and I know she's fast, but I figured we were going to be against the fastest in the country, so I didn't know what to expect.”

After riding hunters for the past ten years, Hamilton sat on Sacha 12 – her first jumper – last August and immediately felt at home. “I always noticed her around the barn and thought she was so cool, but I never thought I'd be riding her,” she said.

When Hamilton began preparing for her transition to the jumper ring, she immediately pitched her trainer on leasing Sacha 12, but McArdle thought the 16-year-old mare had too much blood for a young rider.

“I nagged her a bit and I guess the nagging worked,” laughed Hamilton. “I started hacking and taking lessons on Sacha [last summer] and we clicked right off the bat. She carries me through every mistake and every time we go in the ring she jumps her heart out. You can feel that she wants it just as bad as I do – she's unlike any other horse I've ever ridden.”

“She's definitely a horse show horse,” said Hamilton. “When she gets to the show, she's in the zone and doesn't look at anything. She's perfect. But, at home she likes to push your buttons. She was my first jumper so I didn’t know what I liked and what I didn't like, but I sat on her and thought she was the coolest mare ever.”

While Hamilton's win at WIHS was a highlight, the evening was bittersweet. Wednesday marked the end of Sacha 12's lease and their last time in the ring together. However, thanks to Sacha 12, Hamilton has found her niche in the jumper ring and hopes to return to WIHS in 2016 aboard the junior jumper mare she recently purchased.

The $10,000 WIHS Adult Jumper Championship was held next in the evening session with a win for Tegan Elizabeth Treacy (19) of Needham, MA, riding Starlight Farms LLC’s Catalyst. Thirty-one entries started over the first round course set by Anthony D’Ambrosio, and 17 advanced to the jump-off, where only seven cleared the short course without fault in a competitive race against the clock.

Sydney Crenshaw and Fit to Print Farm’s Camera Ready were fast in 30.03 seconds to finish third. Dean Dignelli and Heritage Farm, Inc.’s Redefin blazed through the course, taking a hard inside turn that gave him the edge in 29.78 seconds, but the pair eventually settled for second place. In the end, Treacy and Catalyst, a 16-year-old Irish Sport Horse mare (Cruising x Ceredigion) clocked the winning time of 29.38 seconds. They were presented the Dorothy Foote “Goodie” Taylor Memorial Perpetual Trophy donated by Mr. & Mrs. Robert Ashton Hill and Miss Linden Joan Hill.

“I haven’t ridden much in the past few months, I started at Duke University in the fall, so I think I have ridden possibly five times just including Capital Challenge, Harrisburg and now Washington,” Treacy detailed. “She is a jumper that I got at the beginning of the season after I aged out of the equitation and I did a lot with her in Florida and all around New England for the summer. I definitely trust her a lot. I made several mistakes undoubtedly in the jump-off, but having such a loyal mare by my side definitely makes me comfortable to be able to kind of let go and let her take care of me.”

This was Treacy’s first time competing at WIHS and a great experience, though she immediately heads back to school on Thursday.

“I’m only here unfortunately for a very short period of time. I flew in this afternoon and fly out at 6 a.m. tomorrow, but what I have seen of it I love,” she noted. “It was a lot of fun to come. Washington has definitely been like no show I have experienced before - just the fact that we are in the city - the stabling is literally hundreds of feet away from my hotel. It is way different than a lot of other shows, and I think the excitement of the city itself definitely shows through.”

The Washington International Horse Show continues on Thursday with the beginning of Junior Hunter competition in the morning and Junior/Amateur-Owner Jumper competition, as well as a $35,0000 International Jumper Welcome Stake later in the day. The evening session will welcome local horse lovers, riders, trainers, and their families for Barn Night, presented by Dover Saddlery, beginning at 6 p.m. The $20,000 International Jumper Gambler's Choice costume class, sponsored by the Winter Equestrian Festival, will be the highlight event of the evening. For full results, please visit www.wihs.org.

For those who cannot make it to the show, it will be live streamed in its entirety at www.wihs.org, and is also available on USEF Network at www.usefnetwork.com.