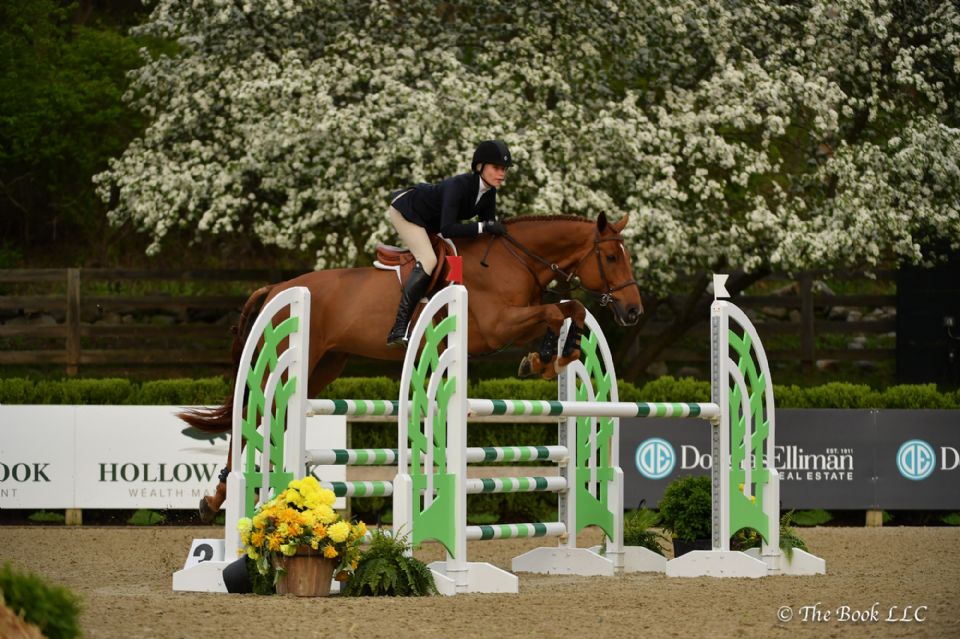 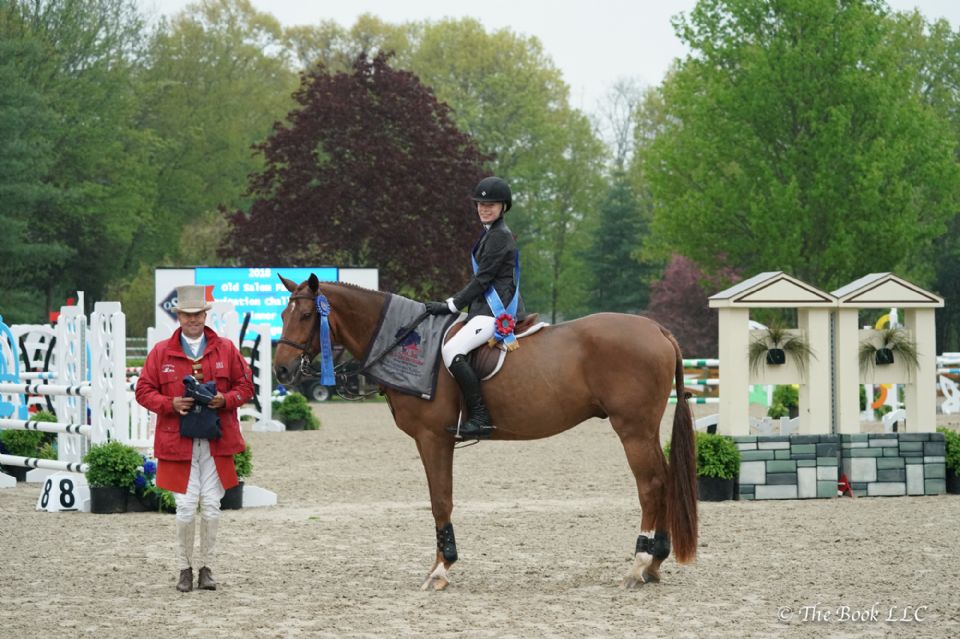 Elli Yeager and Copperfield 39 are presented as winners of the $5,000 Equitation Challenge by ringmaster Alan Keeley at the 2018 Old Salem Farm Spring Horse Shows at Old Salem Farm in North Salem, NY.
Photo by The Book 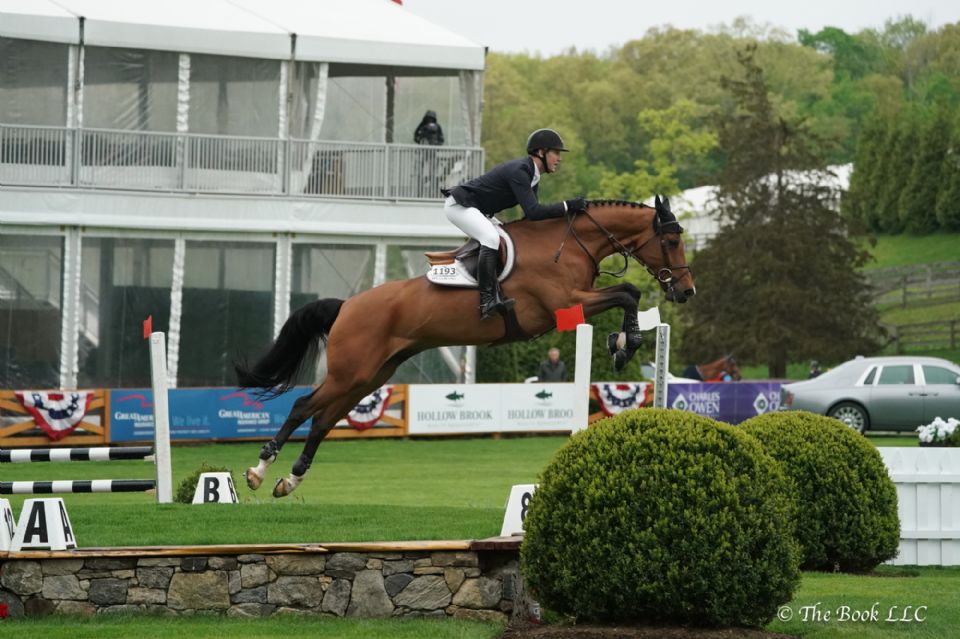 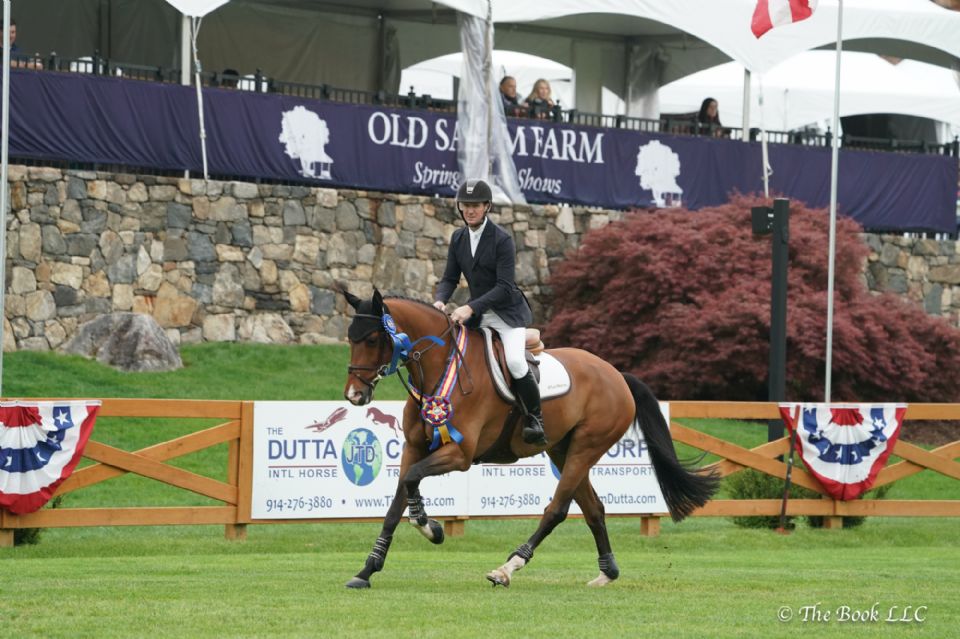 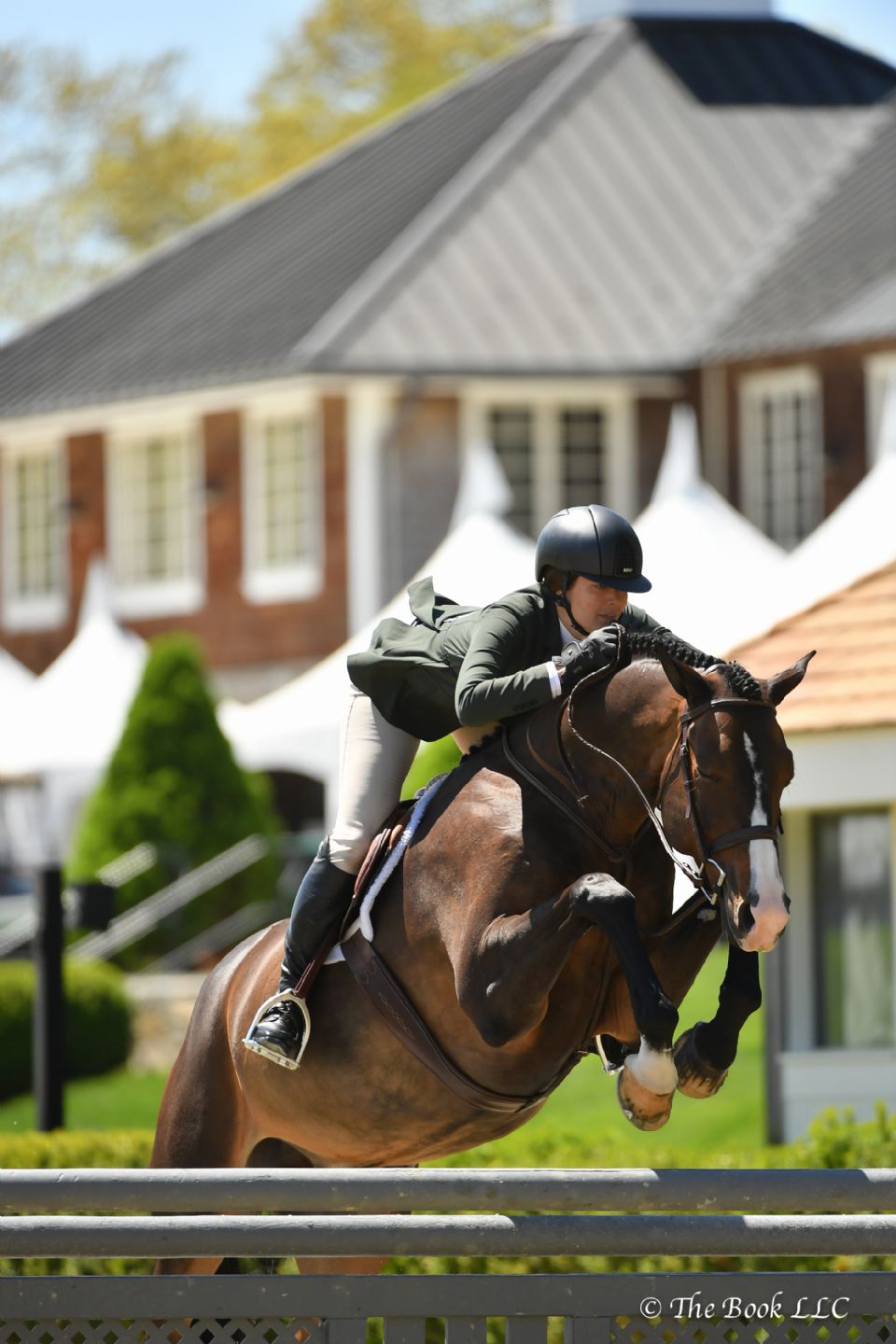 Elli Yeager and longtime partner Copperfield 39 jumped to scores of 92 and 91 to take a commanding lead in both rounds of the $5,000 Equitation Challenge and finish with a total score of 183.

“It was a really fun class and a good way to top off the week,” said Yeager, who trains with Stacia Madden at Beacon Hill Show Stables in Colts Neck, NJ. “It’s an awesome feeling and I could not have asked for my horse to be any better. He knows when it’s serious and he really performed his best today. We’ve gone through everything together and we have a special relationship.”

Yeager got the ride on Copperfield 39 when she was ten years old and grew up on the mount. For two years she has been riding him under the tutelage of Madden, who received a $2,500 Trainer Bonus, sponsored by Old Salem Farm, for her part in Yeager’s victory.

“Before the second round, Stacia told me to really keep him straight, collect in the four stride, and not lose track of the last line,” said Yeager, who is aiming towards a top performance in the Dover Saddlery/USEF Hunter Seat Medal Final this year.

Just a few weeks ago, McLain Ward did not have a derby horse in his string. So, he looked to a sales horse named Dakota to point towards the Old Salem Farm Speed Derby.

“I don’t know if he has ever done the derbies before, but I said to some people in the barn that he was going to be the one to win the derby,” recalled Ward, who hails just up the road from Old Salem Farm in Brewster, NY. “I started jumping him through the woods at home. I jumped him in and out of the ring a few times and really just goofed around with him to get him ready. He’s a really game little horse and a real trier.”

Ward and Dakota secured a time of 64.242 seconds over the faults converted course set by Ken Krome of Westminster, MD, which included the use of elements on the Old Salem Farm Grand Prix Field like the table top, ditch, and bank. Ward and his eight-year-old Dutch Warmblood gelding by Vittorio clinched the win by more than a second over Pablo Mejia Villa (COL) riding his own RL Real Love. They crossed the timers in 65.933 seconds for second, while Canada’s Mario Deslauriers took third aboard his own Curo in 67.556 seconds.

Molly Ashe (USA) was fourth on Picobello Choppin PC in 68.08 seconds for Louisburg Farm, and Adrienne Sternlicht (USA) rounded out the top five riding Hope Street to a time of 68.727 seconds for owner Starlight Farm.

“I think it’s a fun class and a bit interesting when there’s less and less classes like this in the world,” continued Ward. “It’s such a beautiful field that it’s quite a fun class to participate in. The footing is great and has been holding up well with the spring weather we had today. This show has really grown into a lovely two weeks.”

Kelly Tropin of New York, NY, rode Chablis, a ten-year-old Wurttemberger gelding by Camparino to the Grand Amateur-Owner Hunter Champion title during the first week of the Old Salem Farm Spring Horse Shows. Tropin rode to three first-place ribbons over fences, as well as a third and fourth under saddle.

Tropin works as an economist at Graham Capital Management in Norwalk, CT, and rides under the direction of Peter Lutz and Mary Manfredi just five minutes from Old Salem Farm.

“Everything about the show is top notch and I like everything about being here,” she said. “Chablis was his usual self, which means he was perfect. He is so remarkable and I was really trying to show off his beautiful gallop and be bold. He knows what he’s supposed to do so well that he goes in the ring and behaves perfectly. Whenever I’m showing, I’m always trying to maintain a high batting average and have every round be a really good round. When you’re Grand [Champion] it speaks to that consistency.”

The Amateur-Owner Hunter division was split into two sections with Set To Music, ridden by Laura Sexton, sharing the championship, and Rocklyn, ridden by Katie Robinson, and Chicago, ridden by Callie Seaman, taking reserve.

Spectators are welcome at the Old Salem Farm Spring Horse Shows with free general admission to Old Salem Farm Wednesday through Friday. On the weekends of May 12-13 and 19-20, admission is $15 for adults and $10 for seniors and children under 12.

Stay up to date on Old Salem Farm at www.oldsalemfarm.net, and on social media with Old Salem Farm on Facebook, and @oldsalemfarmny on Twitter and Instagram. Follow for an exclusive and behind-the-scenes look at the Old Salem Farm experience, and join the conversation using #OldSalemFarm and #OSFlove.