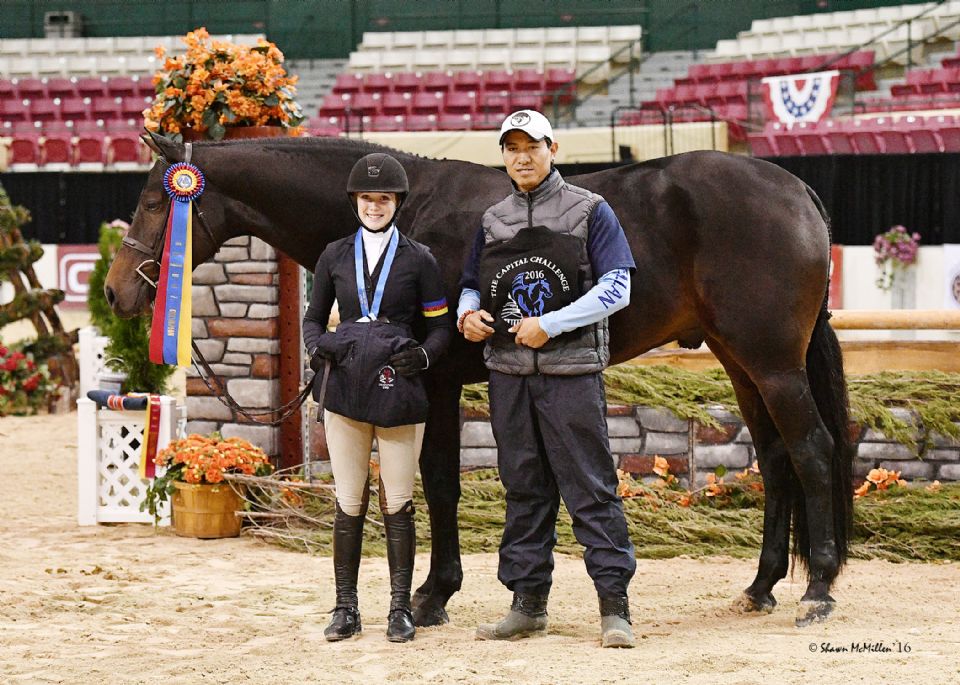 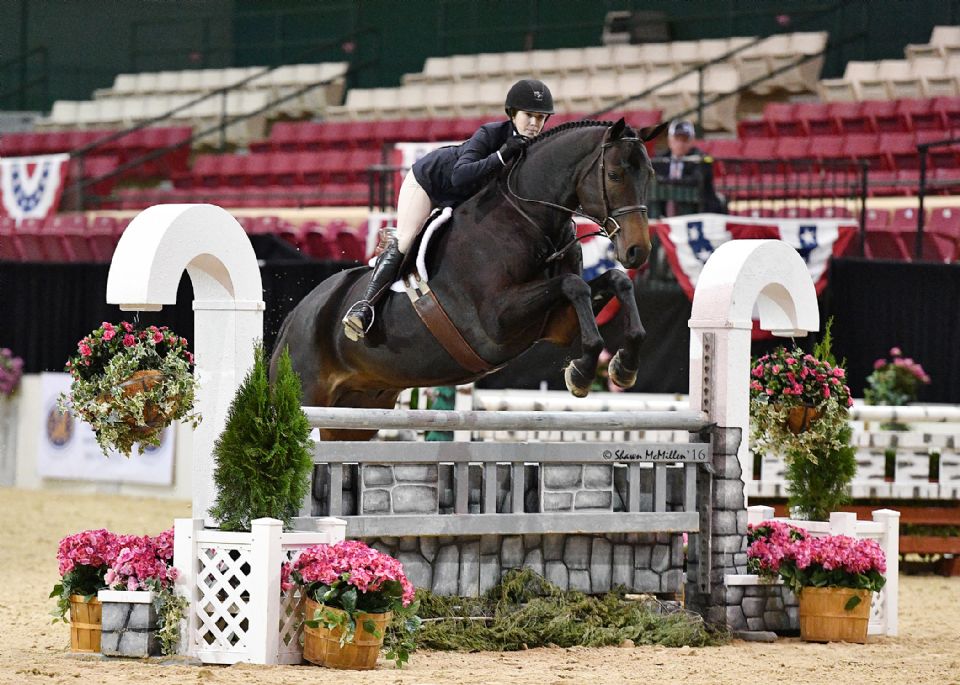 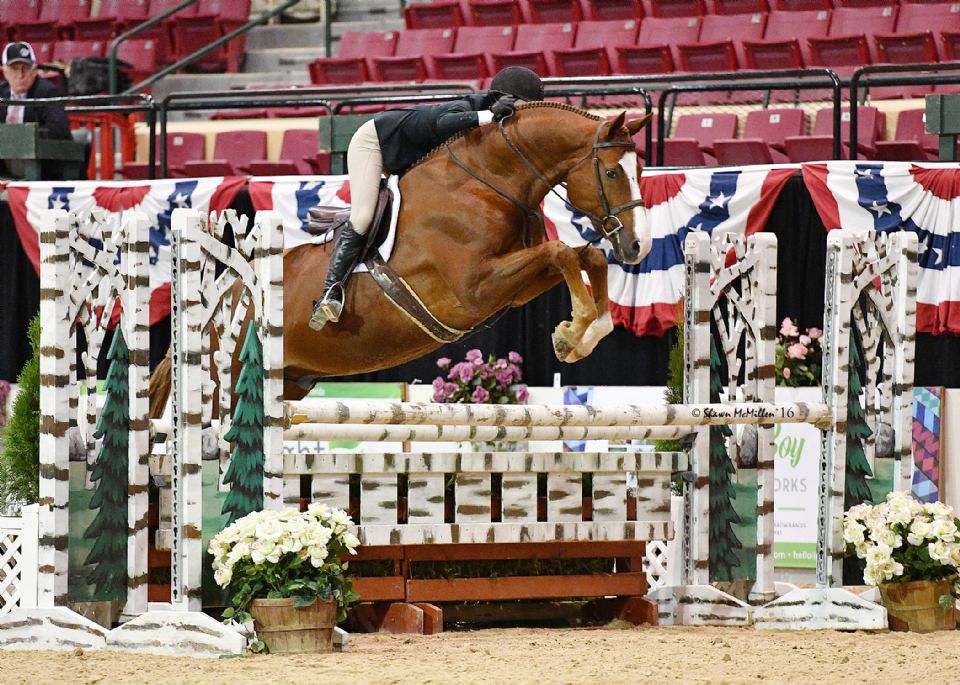 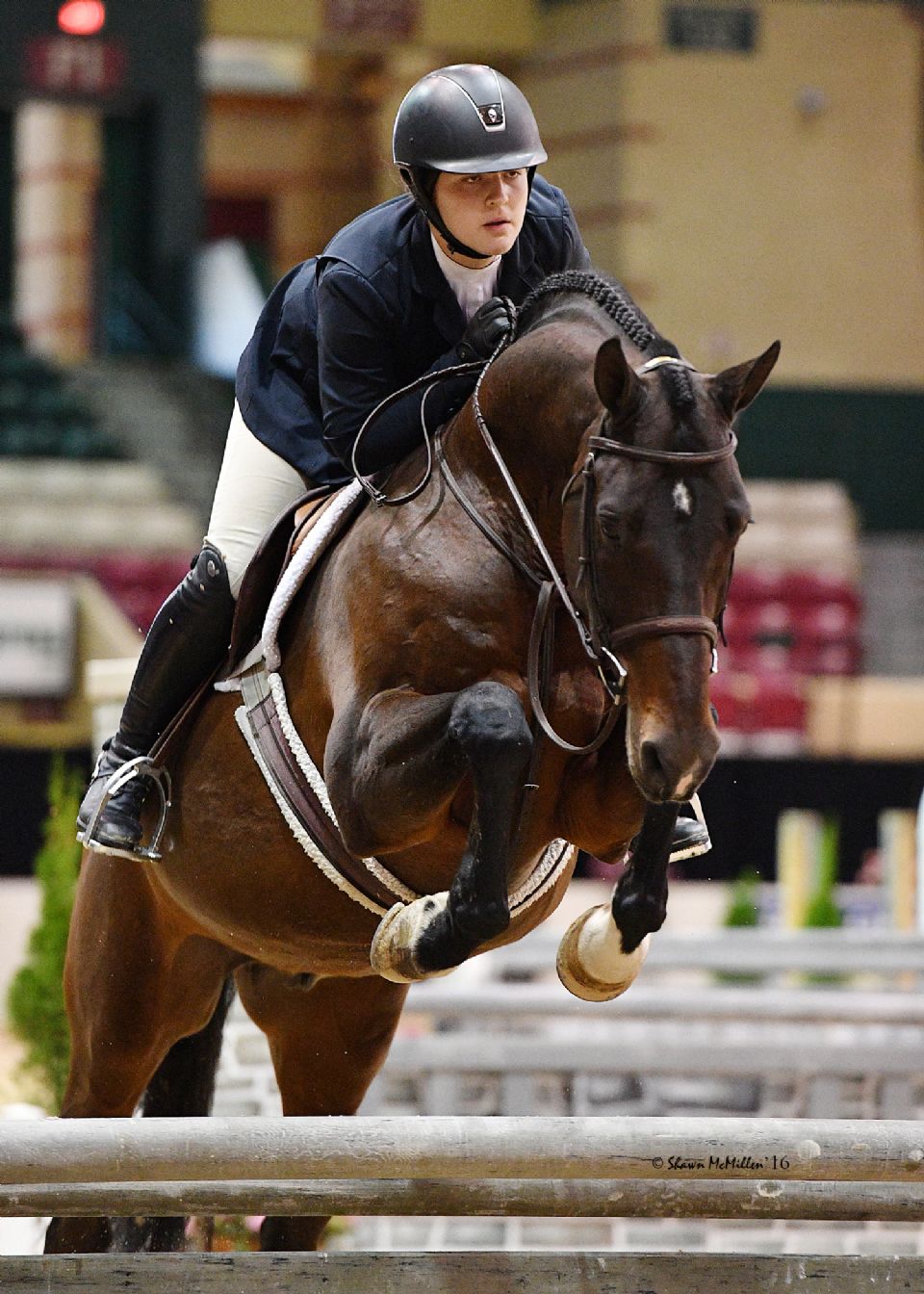 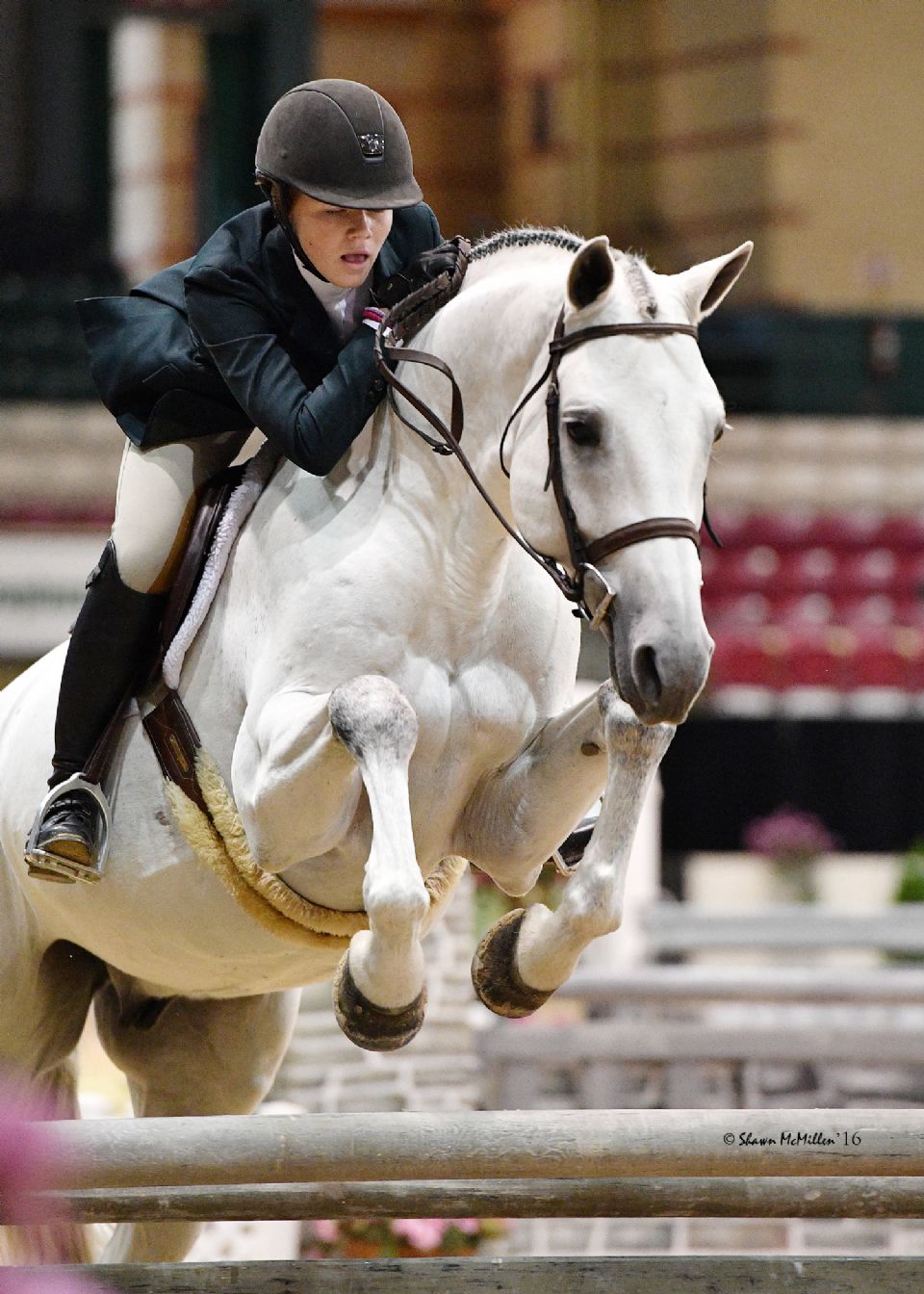 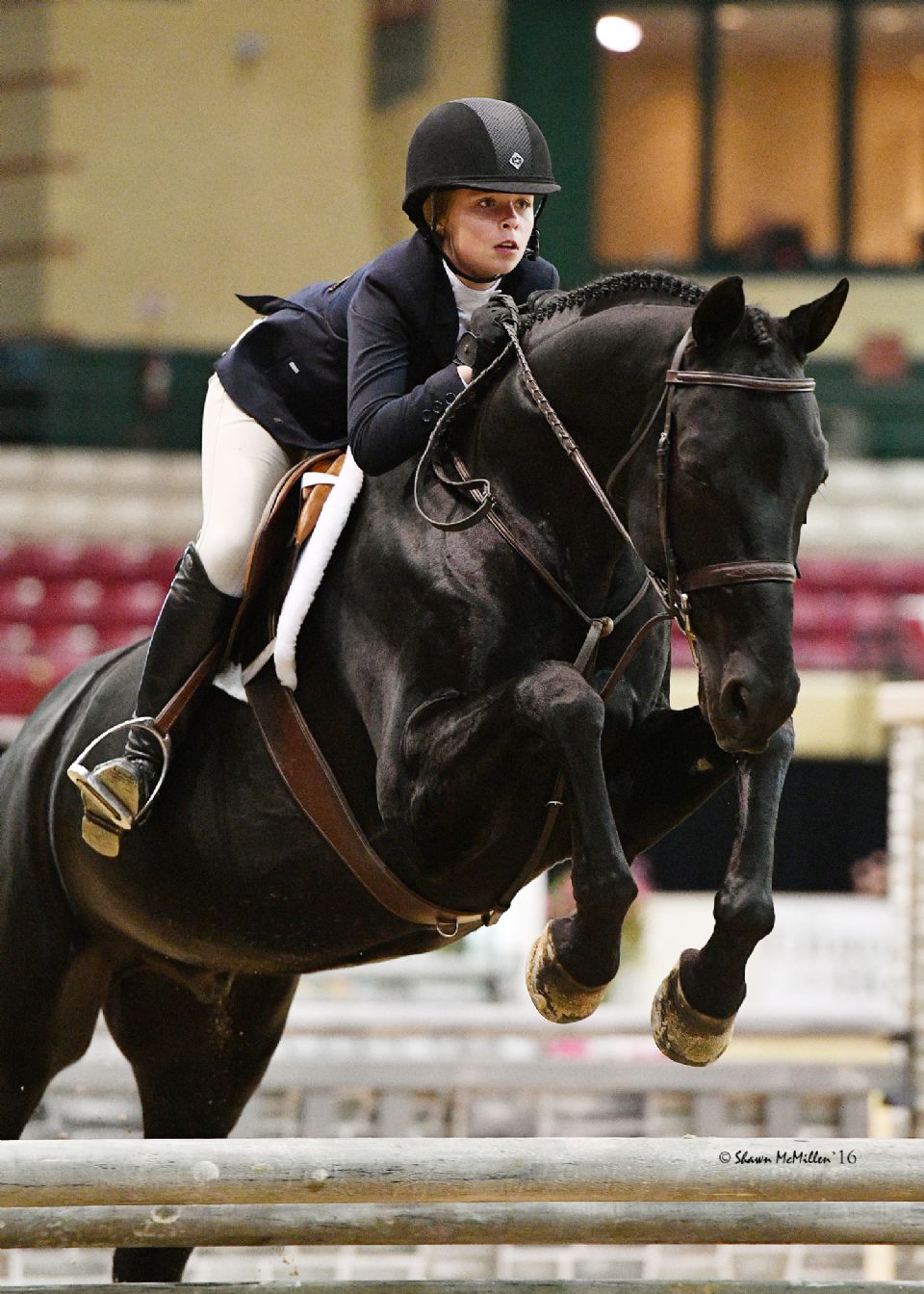 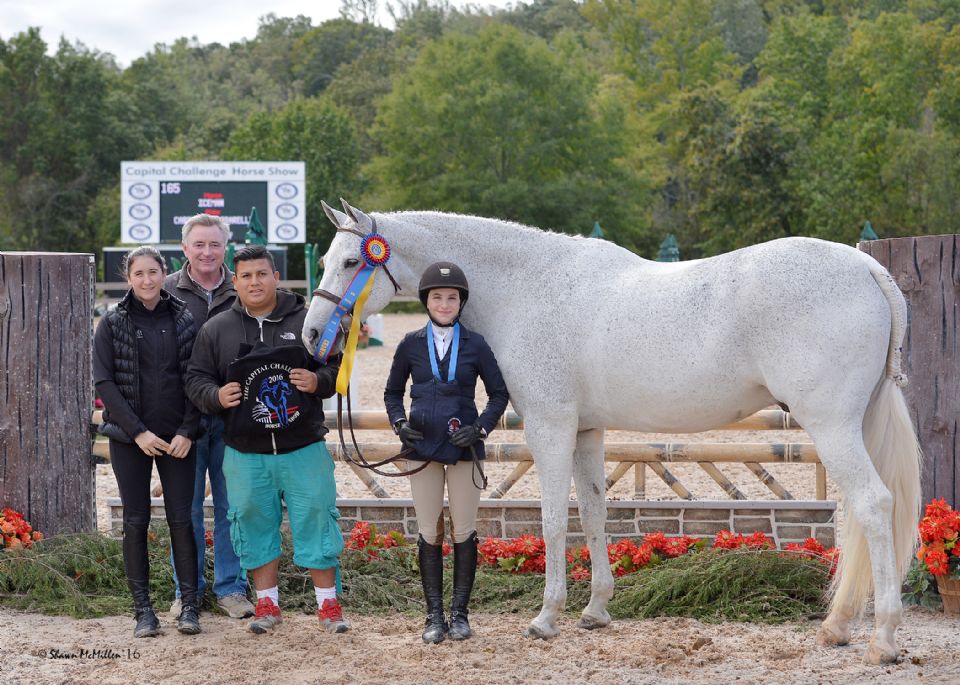 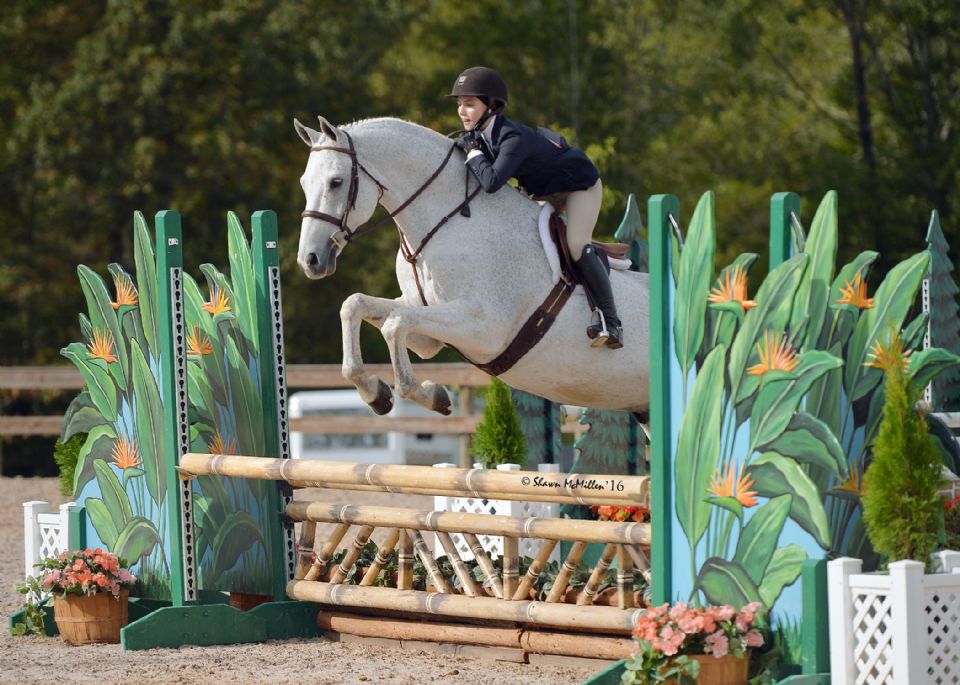 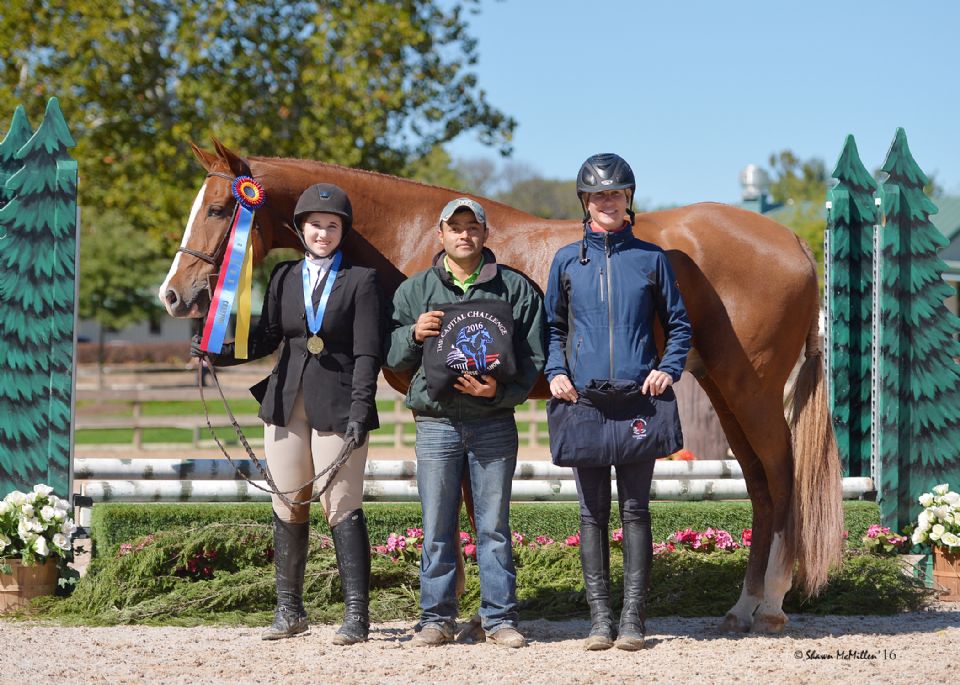 The Capital Challenge Horse Show, presented by the World Equestrian Center, came to a close on Sunday with the best junior riders in the country competing. Junior and Children's riders were featured in the Show Place Arena and the outdoor ring, and six championships were presented throughout the day.

Emma Kurtz won the Grand Junior Hunter Championship for the second year in a row. This year she rode Evermore, owned by David Gochman. Iceman and Caroline Passarelli were named Grand Children's Hunter Champions and the Grand Junior Hunter 3’3” Championship was awarded to Stella Buckingham and Luisant. The Capital Challenge Horse Show hosts the premier hunter competition in the United States and welcomed more than 1,200 horses to Prince George's Equestrian Center over the past nine days.

Kurtz, of Hudson, OH, returned to Capital Challenge Horse Show to defend her title as Best Junior Rider and Grand Junior Hunter Champion and accomplished that feat this year with Evermore, a seven-year-old Bavarian gelding by Empire. Last year, she rode Prologue to top honors.

The reserve champion in the Small Junior 15 & Under Hunters was Viceroy, ridden by Brian Moggre and owned by MTM Farm.

Kurtz began riding Evermore this winter, while Scott Stewart also campaigned him in the First Year Green Hunters. The Gochman family purchased Evermore, and since he was still green, Kurtz continued the ride on him. They were the Grand Junior Hunter Champions at the Devon Horse Show, and after a vacation this summer, they returned to the show ring.

“When he came back, he was a little rusty the first few shows, but he was great here,” Kurtz said. “In the beginning he always had these little things (to work on). We had little mistakes every time.  We all knew he would be amazing. I figured out how to ride him, and he figured out what he was doing. He was just really green when I started riding him. It was really at Devon where he put it all together.”

Kurtz had no worries coming to the indoor Show Place Arena at Capital Challenge and was able to ride through rain and inclement weather outdoors on Saturday.

She said, “All horses react differently, so you do it on the fly. Some don’t care at all (about the rain) and some do, and you just deal with it as it comes. Luckily he didn't care at all.”

Kurtz described Evermore as “like a rocking horse.” She continued, “He has the best rhythm; that’s the best part about him. It’s really easy to find the jumps on (him). The only thing you have to do is keep your body back at the jumps. He’s pretty easy.”

Winning so much at Capital Challenge gives Kurtz confidence heading into the rest of the indoor season.

“It’s really awesome, especially starting our indoor season as reassurance that it’s going to be okay for indoors,” she said. “The horses and myself all get nervous in there, so this is really nice. I’m just so grateful for the opportunity to ride these horses. They’re so amazing.”

In addition to Evermore, Kurtz piloted Wisdom, Fredrick, and Dedication, who won the EMO Junior Trip of the Show with a 92.

“That was really cool for me. I haven’t won anything like that before,” Kurtz revealed. “A 92 is a really big score for me! I was really happy about that.”

The Grand Junior Hunter 16-17 Champion, sponsored by The Clothes Horse, was presented on Saturday to Boss, ridden by Katherine Dash and owned by Laura Wasserman.

The Large Junior Hunter 15 & Under championship, sponsored by Beechwood Farm, went to Puppet, ridden by Emma Wujek for John and Stephanie Ingram, LLC. They placed fifth and first over fences and third in the under saddle. The reserve champions were Garfield and Sophie Gochman, who rode for Rose Hill Farm. They picked up two second places over fences.

The Junior Hunters 3’3” were split into two divisions, with Stella Buckingham and Luisant taking the championship in Section A, and Grace Pearson and Cambiaso earning the Section B title. Buckingham rode Luisant, a nine-year-old Hanoverian gelding, to a first over fences and a first under saddle. Pearson and Cambiaso, a 13-year-old Warmblood gelding by Cassini I, were first and third over fences, fifth in the handy stake, and third in the under saddle to garner the top tricolor ribbon. They also went on to win the WCHR Junior 3’3” Challenge and the WCHR Junior 3'3" National Championship. Amber Ayyad earned the reserve championship in Section A with Macallan, and in Section B the reserve championship went to Elise Buhl and Chabliano Z. Ayyad also won the EMO 3'3” Junior Hunter Trip of the Show with a score of 87.5 on Macallan.

“I was so nervous when I got here,” said 11-year-old Buckingham who made her first trip to Capital Challenge from Los Angeles, CA. “I was freaking out.  I was nervous today just to go in the indoor, because obviously I've never been in there before. Then I think when I started trotting, the nerves kind of just went away.”

Luisant was previously ridden in the Amateur-Owner 3’3” Hunters by Buckingham’s mother, Kristen, before the young rider took over the ride earlier this year. The pair clicked instantly and quickly started to move up the ranks from the Children’s Hunters to the Junior Hunter 3’3”.

“He's really fun,” Buckingham said. “He's really comfortable, and he's really smooth. His jump is so fun because it's like springs, but it's really easy to stay with. He's really adjustable too.”

Passarelli Is Cool As Ice For Grand Children’s Hunter Win

Caroline Passarelli (14) of High Falls, NY, rode Iceman, a Westphalian gelding by La Merto owned by Kaile Rudy, to champion and Grand Champion honors on Sunday. They won an over fences and the under saddle to win the Children’s 14 & Under Hunter division championship, sponsored by Mr. & Mrs. Gary Duffy and Little Brook Farms, Inc. The reserve champion was Santos, ridden by Anna Moellenhoff.

Passarelli only just started riding Iceman a few weeks ago, and their first show together was last week at Old Salem Farm.

“[Kaile] very generously let me show him for a little while,” Passarelli explained. “He’s a really amazing horse. There’s not a whole lot to him. He really is point and shoot. He moves spectacularly, he jumps amazing, and he has the best personality.”

Passarelli does not own any horses of her own and must rely on the ability to catch ride at horse shows. She was not nervous heading into Capital Challenge though, because she knew she could rely on Iceman.

“I knew that he was really capable of doing what he did,” she said. “I just wanted to make sure to keep it all calm and smooth, and really let him do the job that he does so well. I am a catch rider, so I’m always riding new horses. I don’t own anything of my own. It’s really great to be able to broaden your riding, to get on a horse and in a matter of time adjust to it. It feels really great.”

While Passarelli has won in the pony hunters at Capital Challenge before, her win in the Children’s Hunters was meaningful too. “It means so much because this is my transition from the ponies to the horses. This next year will really be about focusing on the horses. It’s really great to solidify the fact that I can do it, as long as I keep working for it.”

The championship in the Children's Hunter 15-17 division went to Rio Java House, ridden and owned by Maggie Greene. They placed first and second over fences. Leah Swope and Daybreak earned the division reserve championship.

The EMO Best Children’s Hunter Trip of the Show was a tie between Passarelli and Iceman and Daybreak, ridden by Swope. They both scored 85.5.

Annika Singh was victorious in the WCHR Children’s Hunter Challenge, sponsored by Stephanie Bulger and Meadow View, riding Monopoly. The win in the WCHR Junior Hunter 3’3” Challenge went to Grace Pearson of Seattle, WA, and Cambiaso.

The EMO Overall Trip of the Show went to Stewart as well, who scored a 93 with David Gochman’s Catch Me.

Brian Moggre of Flower Mound, TX, was awarded the Stewart Warner Cup for junior riders, and Maggie Greene won the Stewart Warner Cup for child riders. The trophy is given in memory of Laurie Gilbert Stewart & Mary Warner Brown by Donald E. Stewart, Jr. and Louise W. Serio. It is awarded to up-and-coming junior riders, who, in the opinion of the panel of judges, exhibit the best hunter style and show potential as a young hunter rider.

Capital Challenge gives thanks to their exhibitors, sponsors, staff, and spectators for another fantastic event. They look forward to welcoming everyone back in 2015.