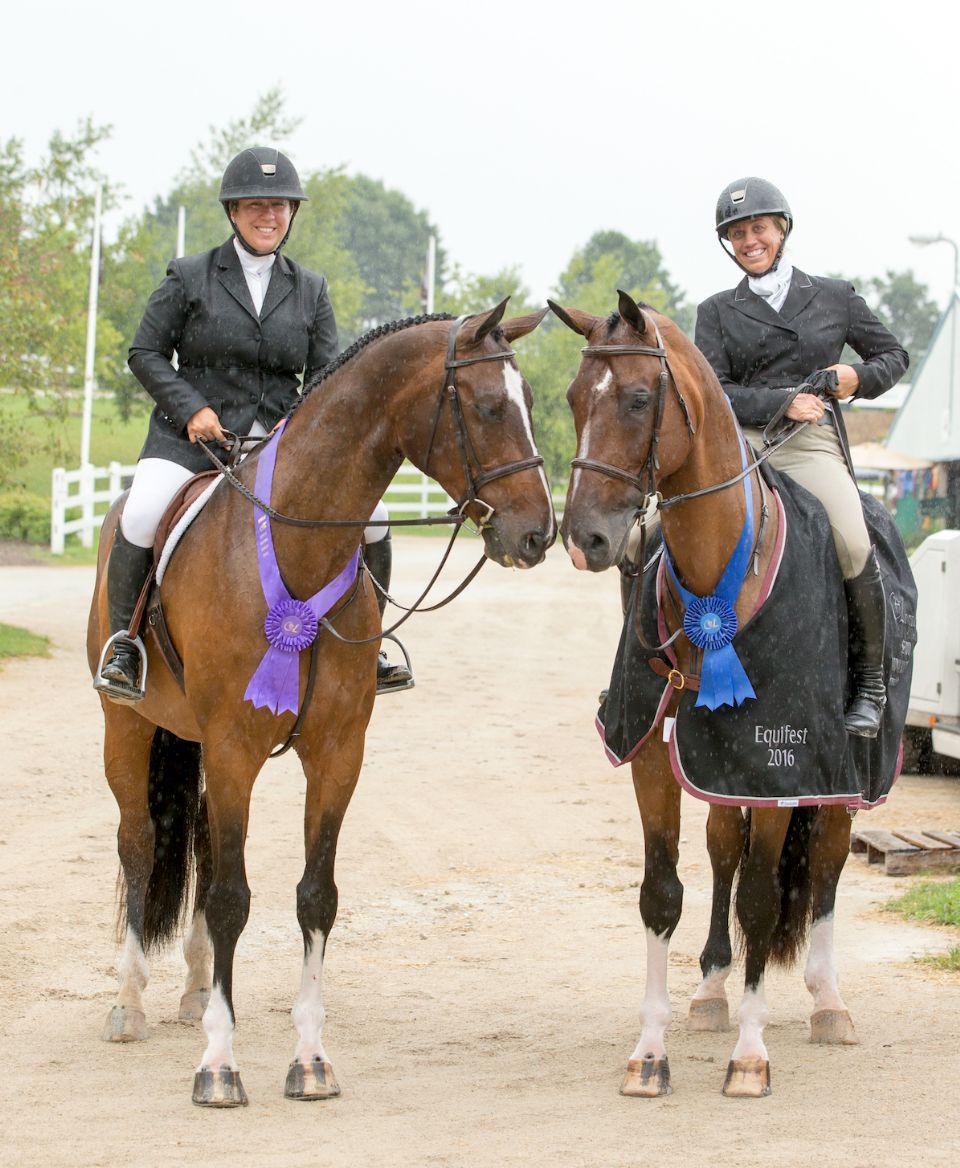 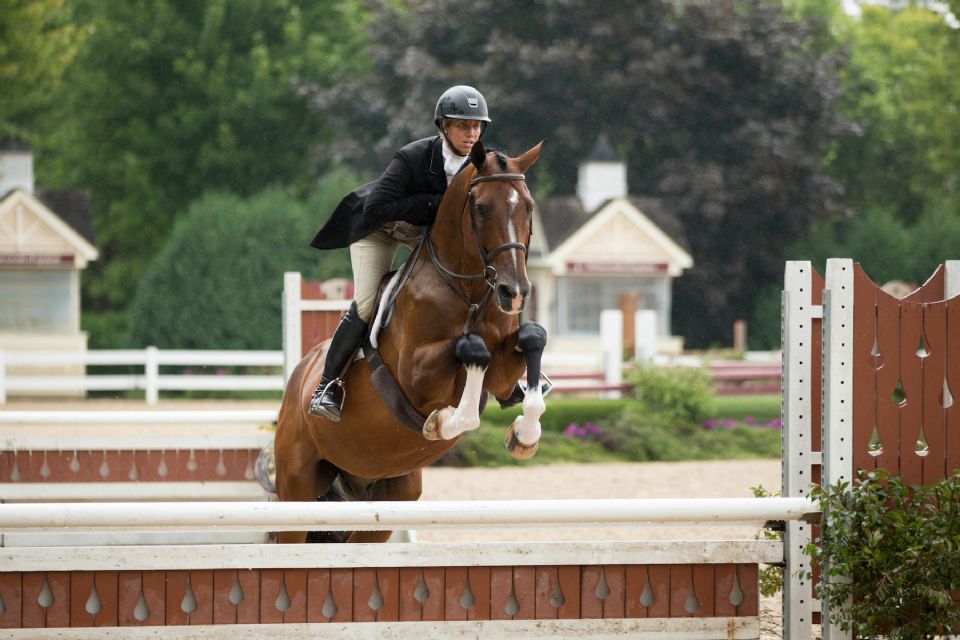 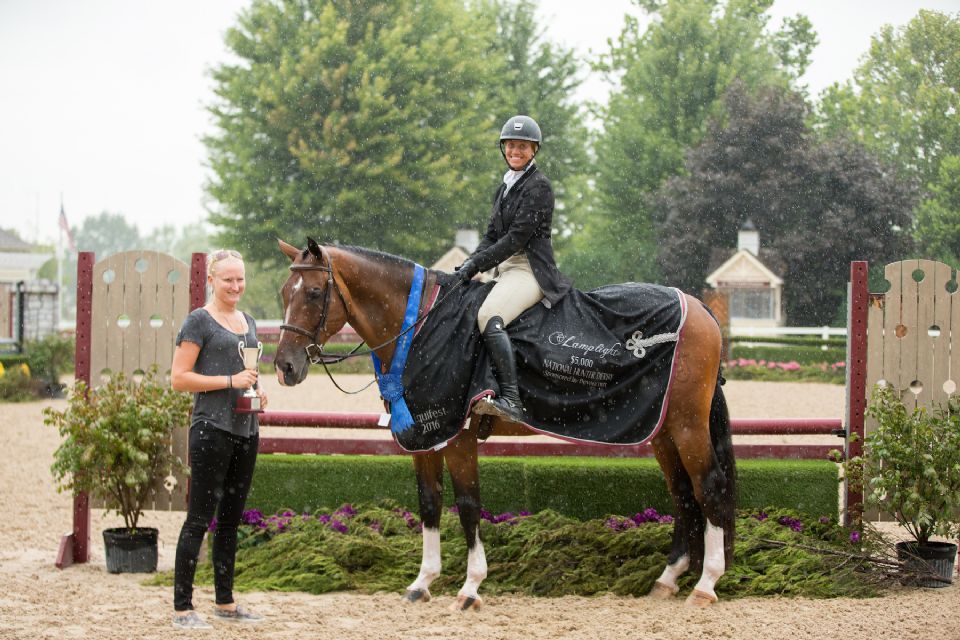 Caitlyn Shiels and Cassius in their winning presentation for the $5,000 USHJA National Hunter Derby at Equifest III.
Photo by Collin Pierson Photography 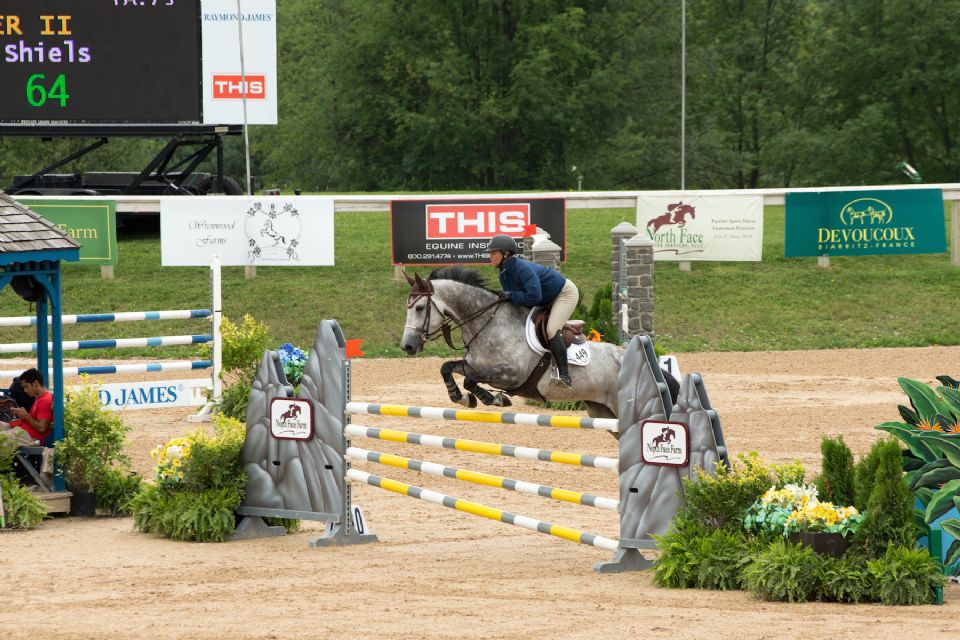 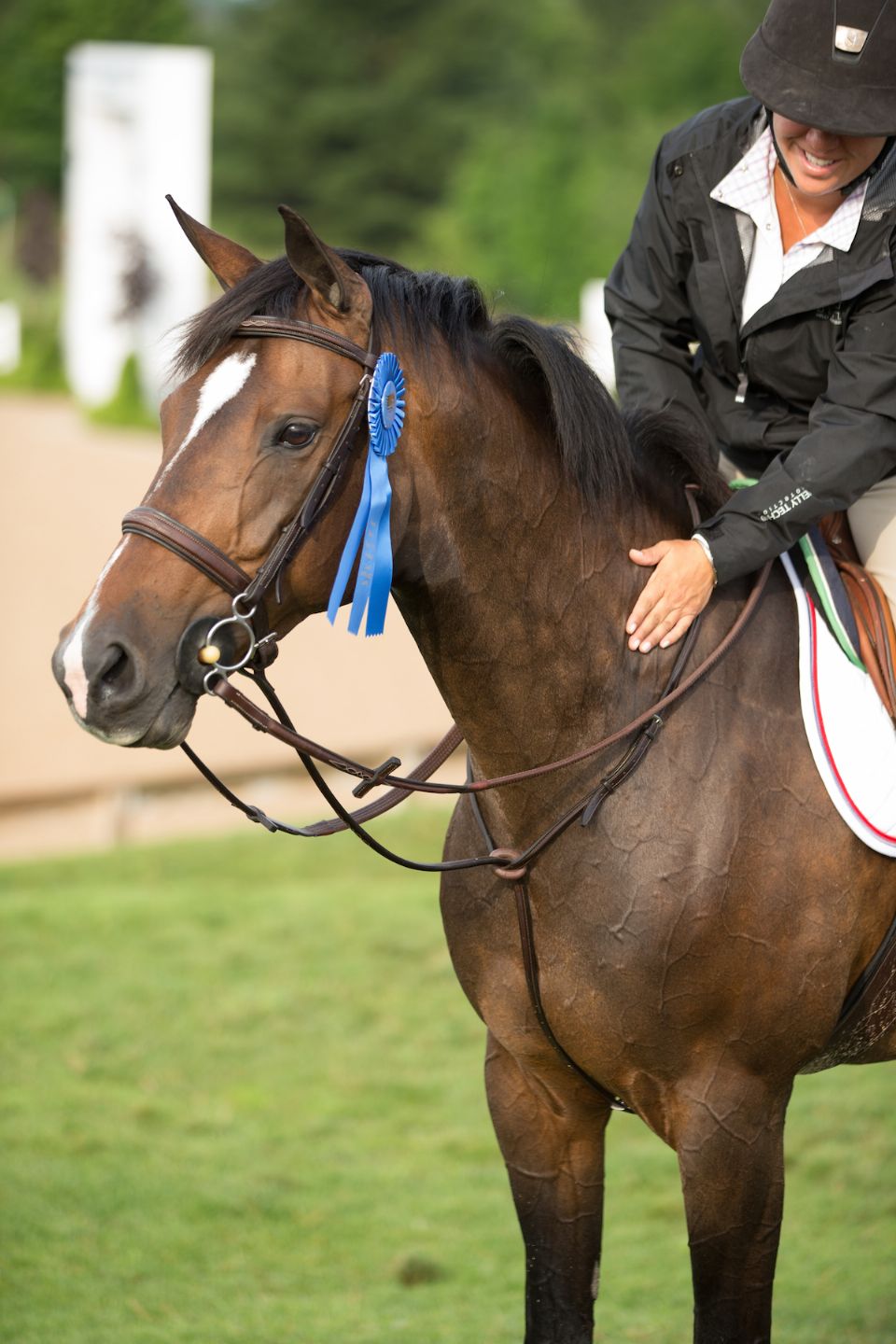 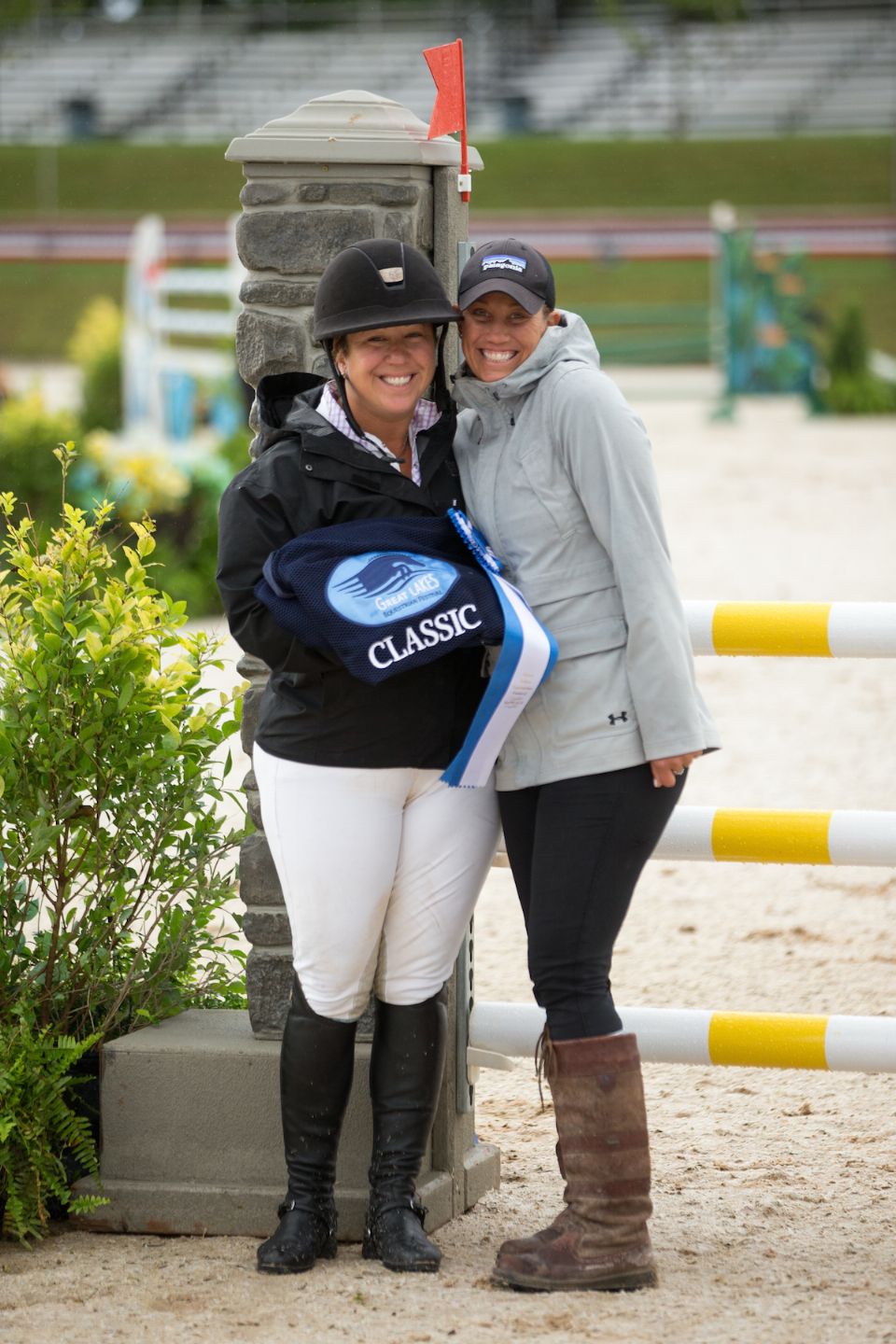 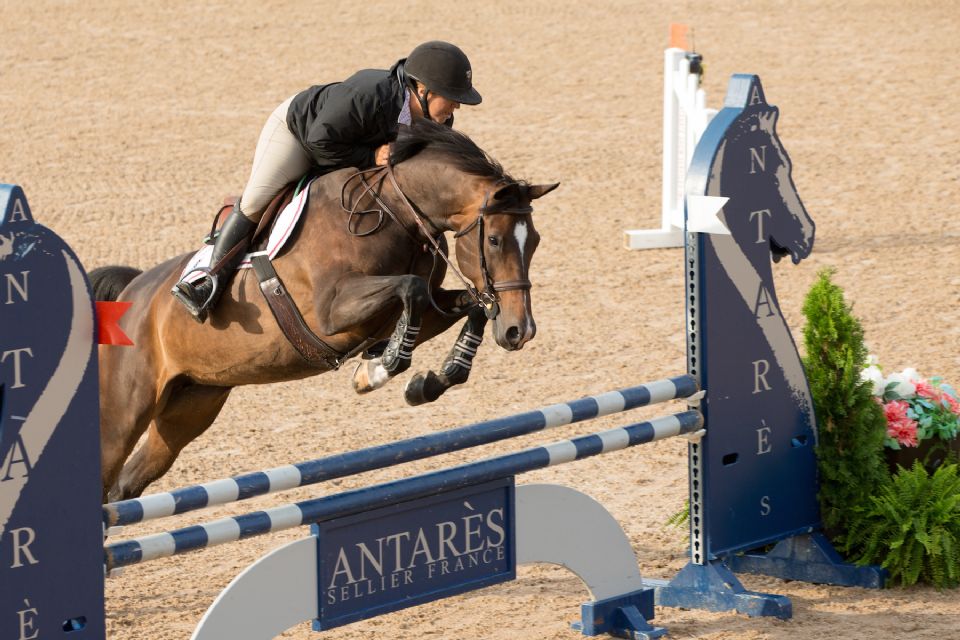 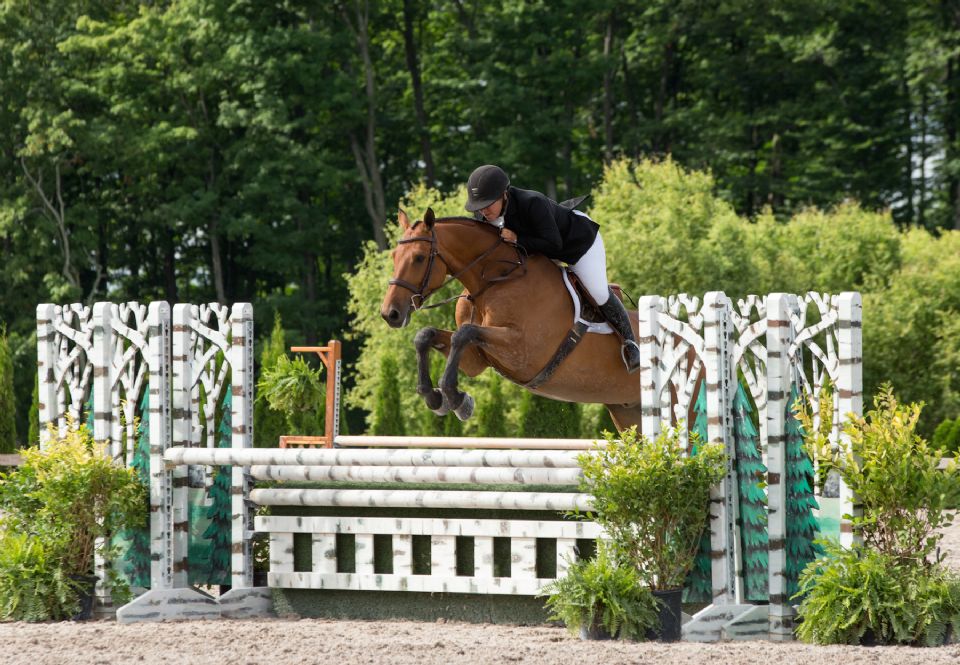 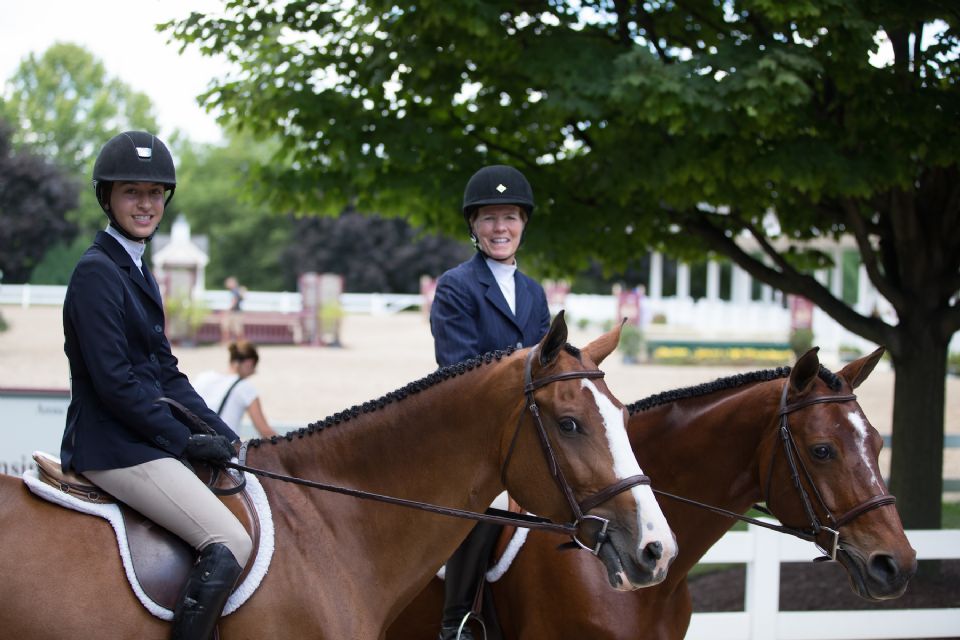 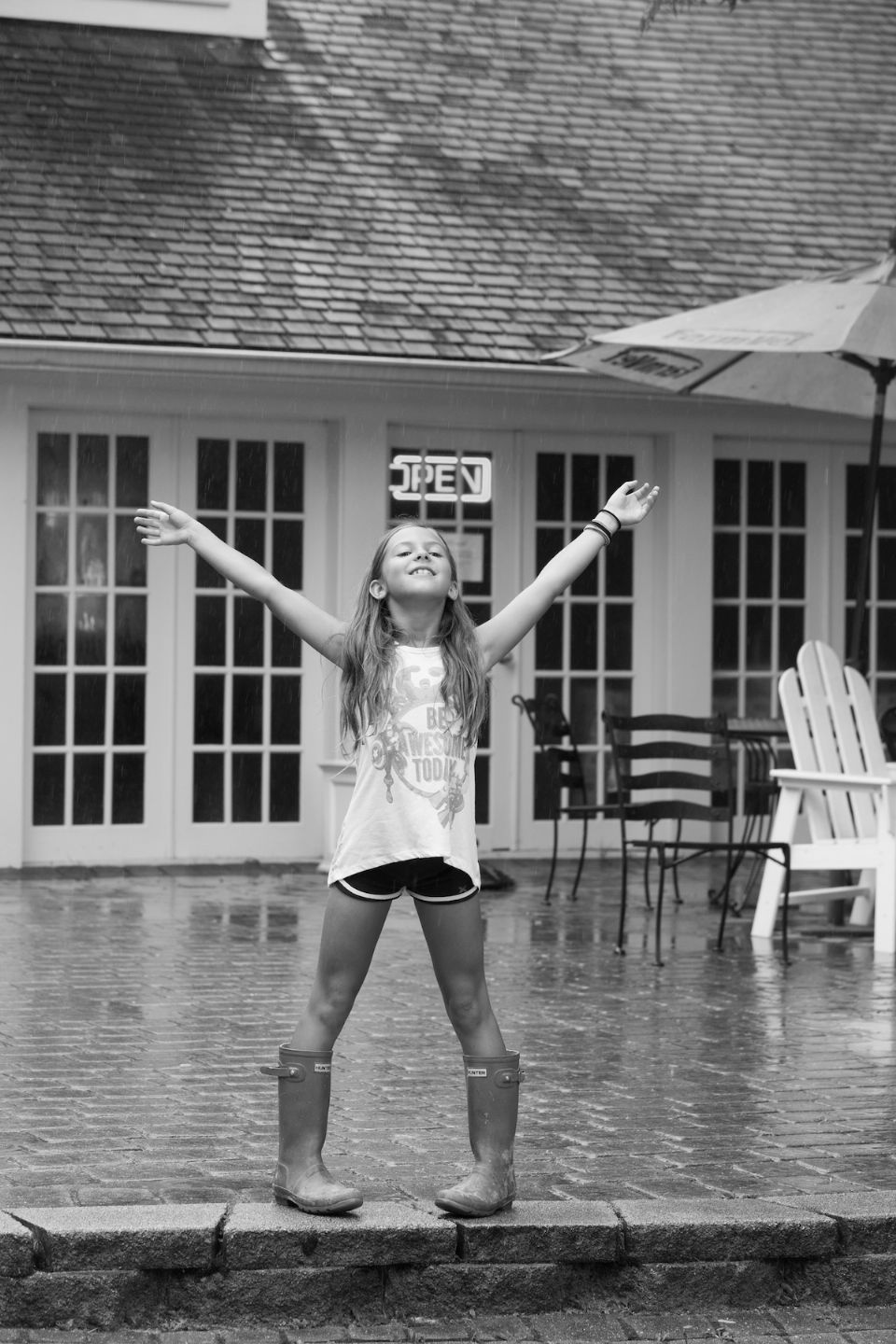 Samantha Pogorzelski makes the most of the rain.
Photo by Collin Pierson Photography

As the summer season comes to a close, the riders of Canterbury Farm celebrated great success competing in the Midwest’s top equestrian venues throughout the month of August. Canterbury Farm is a full-service hunter/jumper training and show facility located in Hampshire, IL. Led by trainers Greg Franklin and Caitlyn Shiels, Canterbury Farm participates and triumphs in both local and nationwide hunter/jumper competitions.

Canterbury Farm began the month on home turf, competing at the Lamplight Equestrian Center in Wayne, IL, for two weeks of Equifest from August 2-14. They then ventured back to Flintfields Horse Park in Traverse City, MI, for the sixth week of competition at the Great Lakes Equestrian Festival from August 17-21.

“He was great!” said Shiels of her win with Cassius. “The first round was really nice. There were nice high options, good turns, and a nice bending line. Cassius was very smooth, very rideable, and I was very happy with him.

“During the handy I just wanted to be super-smooth,” continued Shiels. “I had a nice score in the first round, so I wanted to go in and lay down the same trip with a little bit tidier turns. He handled it all very well. I knew at the end that he was very good and really deserved the scores that he got, so I was very pleased with him. It has been great having the opportunity to ride such a nice horse.”

The same week, Shiels and Cassius also earned the reserve championship title in the Green Working Hunters after earning a first place, three seconds, and a third in the division. The pair also finished eighth in the $25,000 USHJA International Hunter Derby during Equifest II.

“Cassius is a really smooth, big, scopey mover,” said Shiels of the horse she has been partnered with since April. “He has a really smooth canter and is very enjoyable to ride. He has just been progressing more and more. It is getting better and more consistent with every horse show that we go to. He is a very smart horse!”

Shiels also had a win in the show jumping ring at Equifest with her nine-year-old warmblood gelding Cavalier II, sired by Whitesnake. The pair began the final week by posting the only clear round to claim victory in the 1.30m Open Jumper class.

“We have been taking our time,” explained Shiels of the horse she imported as a six-year-old and has spent the last three years developing. “I have moved Cavalier II up a little bit every year. When I first imported him, we did the six-year-old jumpers. I qualified him for the Young Jumpers in Kentucky, and then last year I moved him up to bigger classes and did a few small grand prix events. This year, I have played around with some 1.35m, 1.40m and 1.45m classes."

Shiels continued, “He has been great all along. He is a little bit challenging. He has a little bit of a hard mouth, so we have just been figuring out what bridle works best and what program works best. He is a little sensitive to certain things - he has his quirks - but I am really excited about him. I call him my unicorn. I have been trying to not get too excited and push him too much, but he has an incredible jump, and I know that the talent is there. I know that he is very smart and anything that I ask he will do.”

In addition, Durpetti and her horses Lucca, Moody Blues, and Serafina rode their wave of success from Equifest to Traverse City, posting great results in their final week of showing in August.

Durpetti and Serafina won their first-ever Low Adult Jumper Classic and were champions of the Low Adult Jumper division during week six of the Great Lakes Equestrian Festival in Traverse City. Durpetti and her horse, Moody Blues, were reserve champions of the Adult Equitation division and also finished tenth in the USHJA National Hunter Derby. Riding Lucca, Durpetti was very consistent in the Amateur-Owner Hunter 3’3” division, and ended up in fourth place in the USHJA National Hunter Derby that week.

Commenting on her success, Durpetti noted, “I am so fortunate to have had such a great summer with the horses. There was immense progress for me and my horses from show to show, and I am so proud of them. I am also grateful to Caitlyn and Greg for always dedicating the time to maintain their programs.”

Durpetti’s win with her nine-year-old Dutch Warmblood mare Serafina, sired by Verdi, was a special experience for the rider, and something that she has worked hard to accomplish.

“Winning a jumper classic was a goal that I expressed to Greg and Caitlyn that I wanted to achieve this year,” said Durpetti. “Getting back into the jumper ring after a long hiatus was a bit daunting and I definitely had some ups and downs, but my horse Serafina is so truly special. This little mare takes such great care of me that she has actually been a huge factor in my ever-growing love of the jumpers! It was really satisfying for me as a rider, and a really happy moment for me to share with Caitlyn and Serafina, because they are really the two main reasons why I am able to get in that jumper ring. I know that every horse person knows this, but truly special horses really give you the courage and the support to accomplish things you never thought you could. Both Lucca and Serafina have given me that this summer, and for that I am so truly grateful!”

Durpetti added, “I had the best time riding in a few National Hunter Derbies with my seven-year-old, Lucca. He stepped right up to the plate and was with me every step of every course. It is such fun to compete in those classes, and such a great learning opportunity for me as a rider.”

Despite some rainy weather in each location, Canterbury Farm kept spirits high to conclude their final weeks of summer competition. Everyone will now take a few weeks off to rest and gear up for the fall horse shows and indoors.

About Canterbury Farm
Canterbury Farm maintains a horse show schedule on a local, regional, and national level that is created with its customers’ competitive goals in mind. For over 35 years, Greg Franklin has ridden hunters and jumpers to numerous championships nationally and has brought home numerous Zone 5 ‘Horse of the Year’ awards. Franklin has qualified horses and riders for the Pennsylvania National, Washington International and the National Horse Shows including the Medal and Maclay Finals. He has also shown internationally at Canada’s Spruce Meadows in the 1.40m and 1.45m divisions and is a certified trainer with USHJA. Additionally, Franklin holds his ‘R’ card in Hunters, Hunter Seat Equitation, and Jumpers, and judges throughout the country.