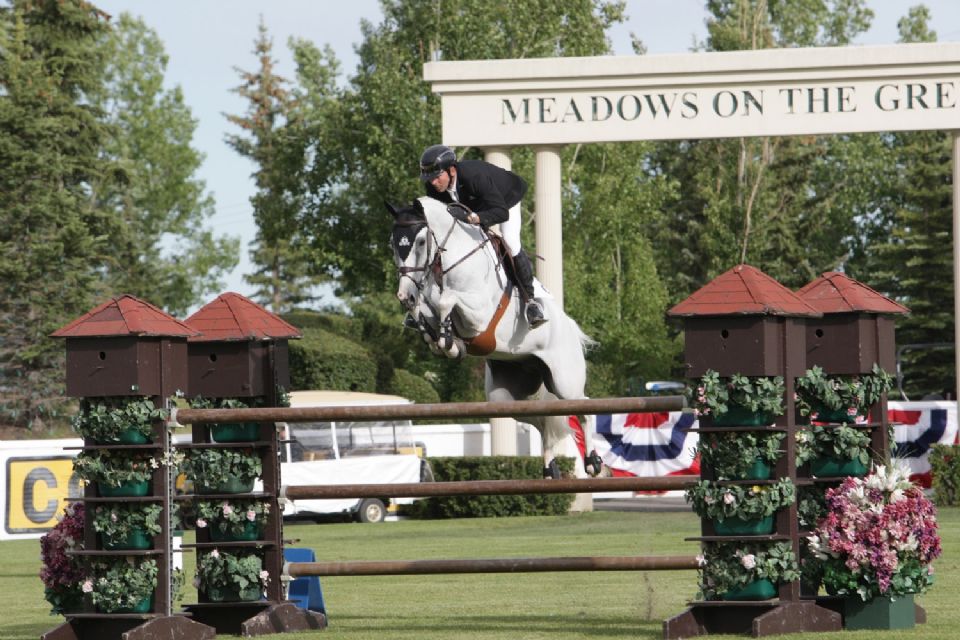 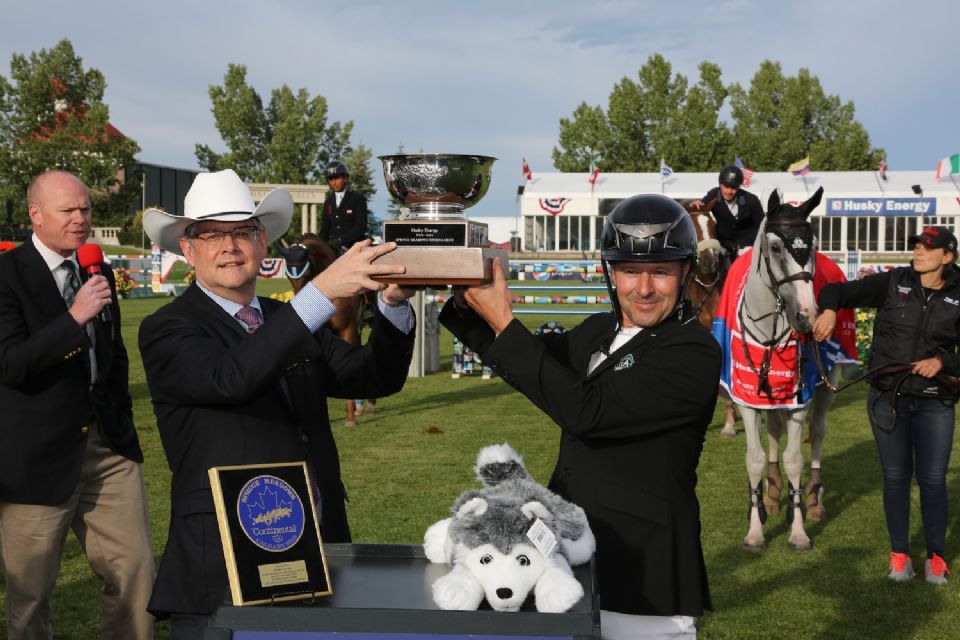 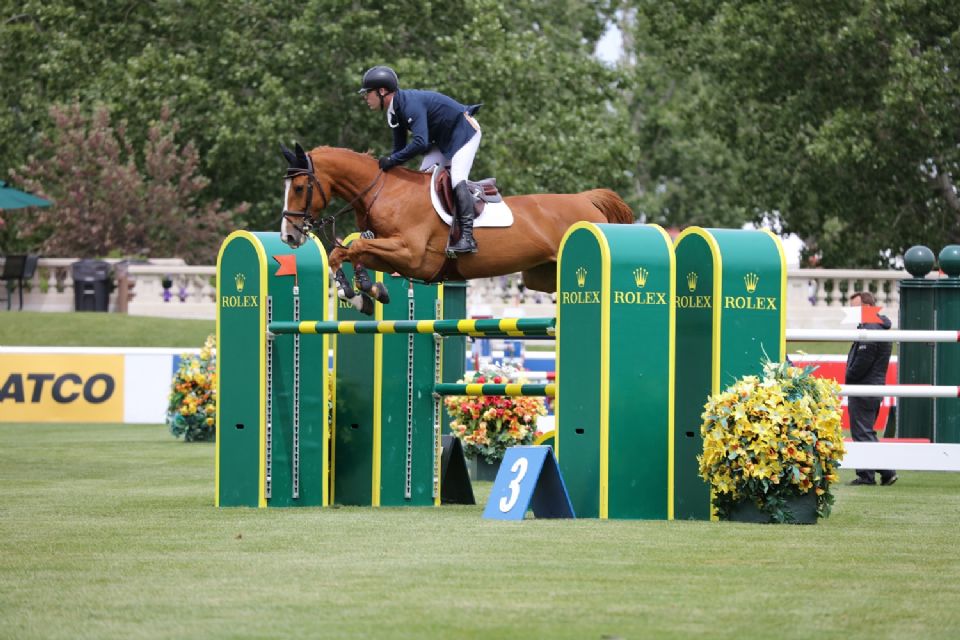 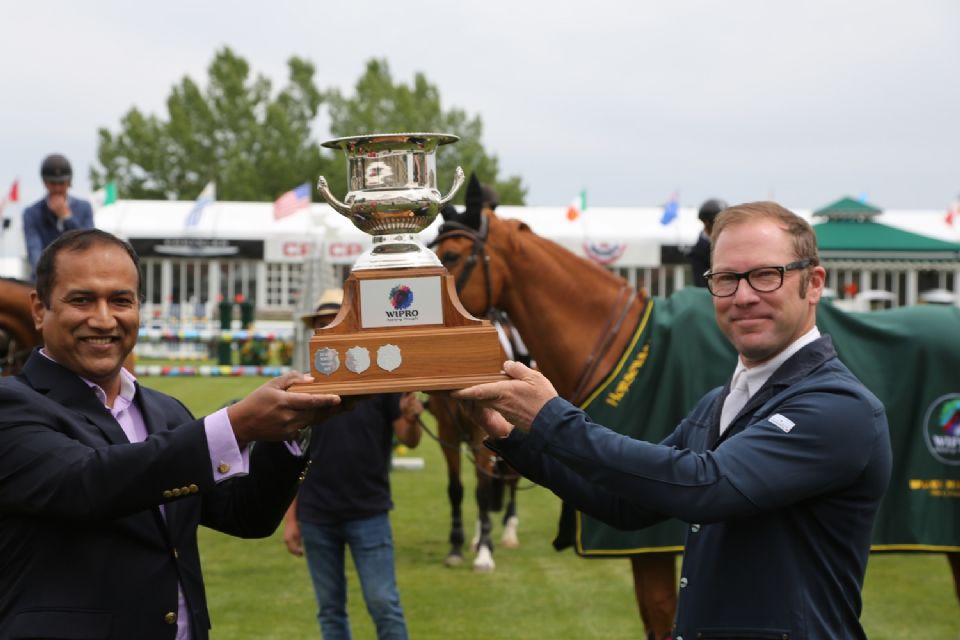 The Spruce Meadows Summer Series continues with the ‘Continental’ CSI 5* Tournament, and it was Eric Lamaze (CAN) who took home the first big win of the week in the Husky Energy Classic 1.50m with Check Picobello Z. Second place went to Tiffany Foster (CAN) on Brighton, while Sameh El Dahan (EGY) riding WKD Diva finished third. In the Wipro Cup 1.45m, Ray Texel (USA) rode Baldira to victory.

In the Husky Energy Cup 1.50m, there were 11 clear rounds and six double clears out of 38 entries that competed over a course designed by Luc Musette of Belgium. Setting the early leading time as the second to go in the ring, Sameh El Dahan and WKD Diva were clear in 42.39 seconds, which would hold up for third place.

Seven horses later, it was Lamaze and Check Picobello Z, a ten-year-old Zangersheide gelding (Cardento x Orlando) owned by Artisan Farms LLC and Torrey Pines Stable, that flew around the jump-off. Coming around the last turn, Lamaze picked up the pace even more with an electric gallop to the final vertical. They brought the winning time down to 39.10 seconds, shaving more than three seconds off of El Dahan’s time.

Lamaze could not sit easy though, knowing that Artisan Farms teammate Tiffany Foster was next in the ring on Brighton.

“Everybody did eight (strides) from one to two, and then six across, and the run to the liverpool (fence) was quite important,” Lamaze recounted. “I saw something really wild, distance-wise, and then I saw something more conservative and I backed up to conservative. He’s not a great turner still, so I had to be cautious around to the double (combination). I didn’t see Sameh go, but I knew Tiffany was after me and that horse is very fast, so I had to step it up. I saw the opportunity at the second to last fence, to take [a stride] out and take a risk. Once that worked out, I thought, ‘Well, why not keep it going? Go for broke!’”

Foster and Brighton made a valiant effort, but were slower in 40.35 seconds for second place.

Fourth place went to Luis Alejandro Plascencia (MEX) and Salamera de la Nutria, who finished in 43.36 seconds. Elizabeth Gingras (CAN) and Avalon 280 were fifth with a time of 45.84 seconds.

Lamaze gave credit to Check Picobello Z for making the effort to keep the last jump up.

“The horse helped me out, to be honest. It’s luck; in the end it just comes down to the effort from the horse,” he said. “We’re going at speed to verticals that probably aren’t meant to be jumped clean. Some of the horses react well (at speed), and some get lost a bit. I love the horse for a lot of reasons, but I always felt that I could never be fast because he’s a little mouthy and needs guidance. I’m so happy.”

Lamaze started with “Pico” three years ago when he was purchased from Ilan Ferder, but an injury last year set the grey gelding back. Starting up in Florida this winter, Lamaze was pleasantly surprised that he picked up where he left off.

“I was so sad last year that he did get hurt. I felt like that if I had the complete year, I would have a 1.60m horse with all the experience,” he remarked. “Now I have a 1.60m horse that is still lacking a bit of experience. It’s a good upcoming horse for me; I like him. When you have a horse that you produce jumping at this level and going fast when you didn’t think [that], it’s a lot of fun. It’s a fun part of the sport.”

Texel Is Fastest with Baldira

Riding out of the 53rd spot in the order of 76 entries, Ray Texel (USA) and Baldira, an 11-year-old Oldenburg mare by Baloubet du Rouet x Carthago, secured the win with a clear round and the fastest time of 63.60 seconds in the Wipro Cup 1.45m.

Texel just slipped past Andrew Ramsay (USA) and Cocq A Doodle, who recorded a time of 63.94 seconds for second place in the speed competition. Third place went to Ian Millar (USA) and Baranus who were clear in 64.96 seconds. Nick Dello Joio (USA) and Contiki were fourth in 65.07 seconds, and Jonathan McCrea (USA) and Special Lux were fifth with a time of 66.13 seconds that resulted in one time fault.

Owner Paul Schockemohle and friend Florian Meyer zu Hartum sent Baldira to Texel just over a year ago. Schockemohle has stayed as an owner, along with a new owner, Katie Harris, one of Texel’s clients.

“I think from my previous results with Fleur, ages ago, I’ve been labeled as good with hot mares,” Texel said with a smile. “It’s a great relationship. The mare and I have now had sufficient time to really get to know each other. We had a nice couple of weeks in Vancouver. She was jumping beautifully. After the week off for her, for me to arrive and have a nice, solid day like this, I couldn’t be happier. We have a great team of people.”

Competing in the Meadows on the Green worked out well for Baldira, said Texel. The open grass field and large, wide jumps give Baldira pause and instead of fighting against her rider, she pays attention and respects the course.

Texel added, “I allow her to carry me and let the jumps be her fight. She’s had enough time with me now to know that ride. The more imposition in front of the horse, for her to fight against, tends to bring her to a better level.”

The duo competed at the Spruce Meadows Summer Series in 2015, and it was satisfying to return for victory in their first competition. Texel believes he will compete with Baldira in Sunday’s CP Grand Prix, but will make sure he does what is best for her.

“Now that I’ve had more time with her, I hope I’m making more mindful choices in this circuit, how I’ll bring her along before the final week,” he said. “It’s nice to have a win the first day, but I don’t ever allow those victories to impact my decisions as far as the plan for the horse and what is right for her.”

The Spruce Meadows ‘Continental’ Tournament continues on Friday, June 17, with a full day of competition, including the Friends of the Meadows U25 Cup, Altagas Cup 1.45m, and Scotiabank Cup 1.55m.