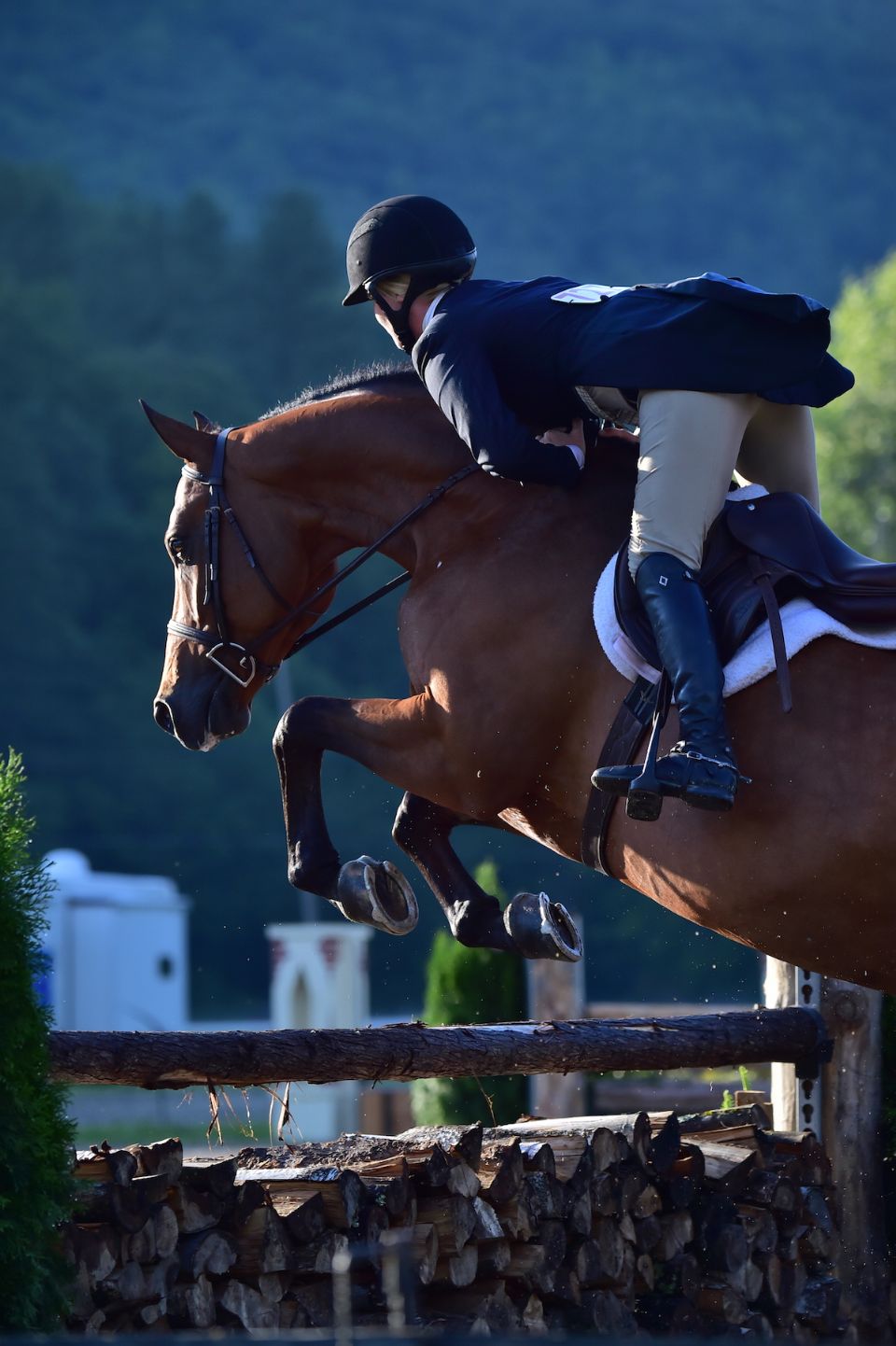 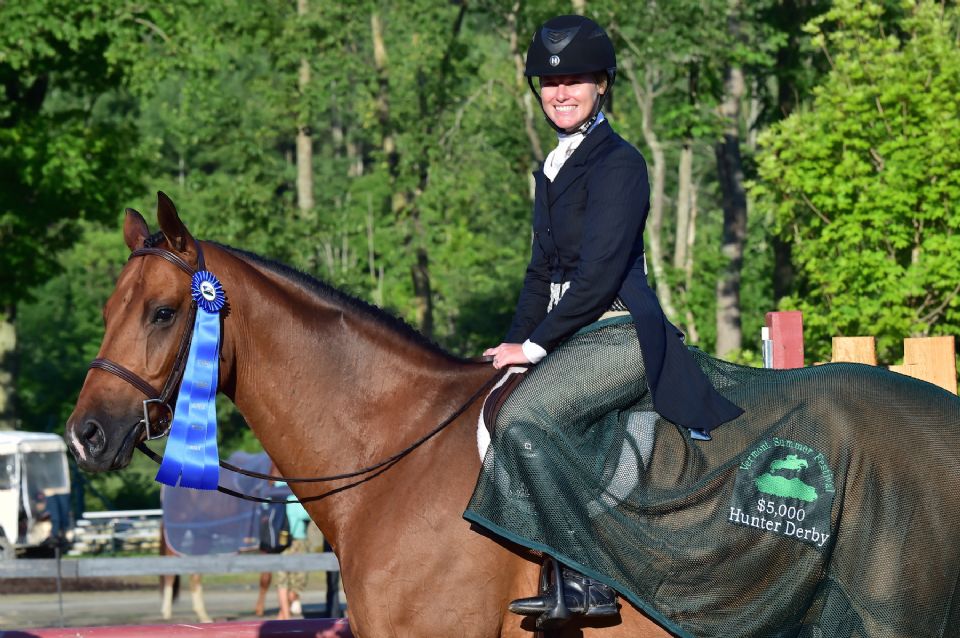 Erin Hastings and Honor are presented as the winners of the $5,000 NEHJA Performance Stake Hunter Derby, presented by Eastern Hay, at the Vermont Summer Festival.
Photo by David Mullinix Photography

Hastings piloted Honor, a seven-year-old Warmblood gelding (Levistano x Liberty) owned by Jennifer Combs, to scores in the high 80s in both rounds of competition. The pair earned an 88 in the first round and a score of 85 in the second for a total of 173 to top a field of 36 starters.

The track, set by Doug Russell of Ocala, FL, spanned two competition rings as it does each Thursday afternoon during the six-week Vermont Summer Festival. Following the first round, the top 12 entries returned in reverse order of standing for a handy course, which again utilized both rings. Hastings returned last on the highest score from round one and successfully defended her spot at the top of the leaderboard.

Megan Young of Jacksonville, FL, trailed Hastings by a single point in each round to finish on a 171 for second place in the irons of Lee Cesery's Rockaway. Her 87 and 84 also scored her the Kastel Denmark Style of Riding Award for her flawless style. Young and her second mount Comanche combined an 83 and 82 for a final 165 and fourth place, again for Cesery.

Jennifer Griffiths of Blue Point, NY, and Grayson, owned by Jeanne Marie Marin, posted a solid 82 in the first round and impressed with the highest score in the second round, an 87. Their 169 total landed them in third. Dudley Macfarlane of Darien, CT, and her own Roland Park rounded out the top five on scores of 80 and 76 for a final score of 156.

Thursday's performance was a self-proclaimed redemption ride for Hastings after she and Honor finished tenth in last week's Vermont Summer Festival derby. “Both he and I had little mistakes last week, so it gave me a good goal to try and fix those things for this week,” she said. “He was fantastic – our first round was in the rain, but he walked right in and wasn't phased at all. It was like last week never even happened.”

Hastings took over the ride on Honor just last week and Thursday marked their second time in the ring together. But, her partnership with the bay gelding is off to a successful start.

“He's amazing,” said Hastings of the young gelding who also does the Amateur-Owner Hunter divisions with Meredith Combs in the tack. “He has an amazing jump, beautiful canter and it's easy to find the distances on him if you stay patient.”

Encouraged by Honor's performance in Vermont, Hastings has plans to continue their efforts in the derby ring. “He could jump any jump no matter what it looks like,” she said. “And it's going to be a '10' jump every time. My goal now is to continue on this path and watch him keep getting better and better.”

Hunter riders are another week closer to the $15,000 Performance Stake Hunter Derby, sponsored by Land Rover Experience. The high-stakes offering will take place during the final week of the Vermont Summer Festival on Thursday, August 6.

Competition at the 2015 Vermont Summer Festival runs weekly from Wednesday through Sunday, beginning each day at 8 a.m. Admission is $6 for adults and $3 for children from Wednesday through Friday. On Saturday and Sunday, admission is $9 for adults, $5 for children. 100% of the gate proceeds benefit the Manchester Community Library and Dorset Equine Rescue. Week 4 of the Vermont Summer Festival will feature the $30,000 Mount Equinox Grand Prix, presented by Purina Horse Feed, on Saturday, July 25, at 1 p.m.