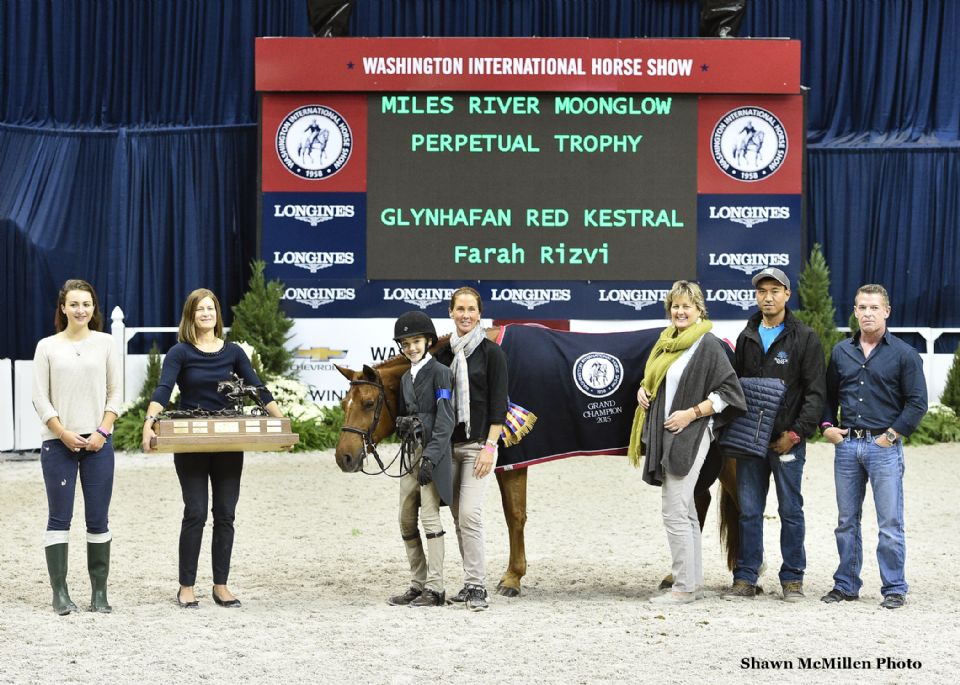 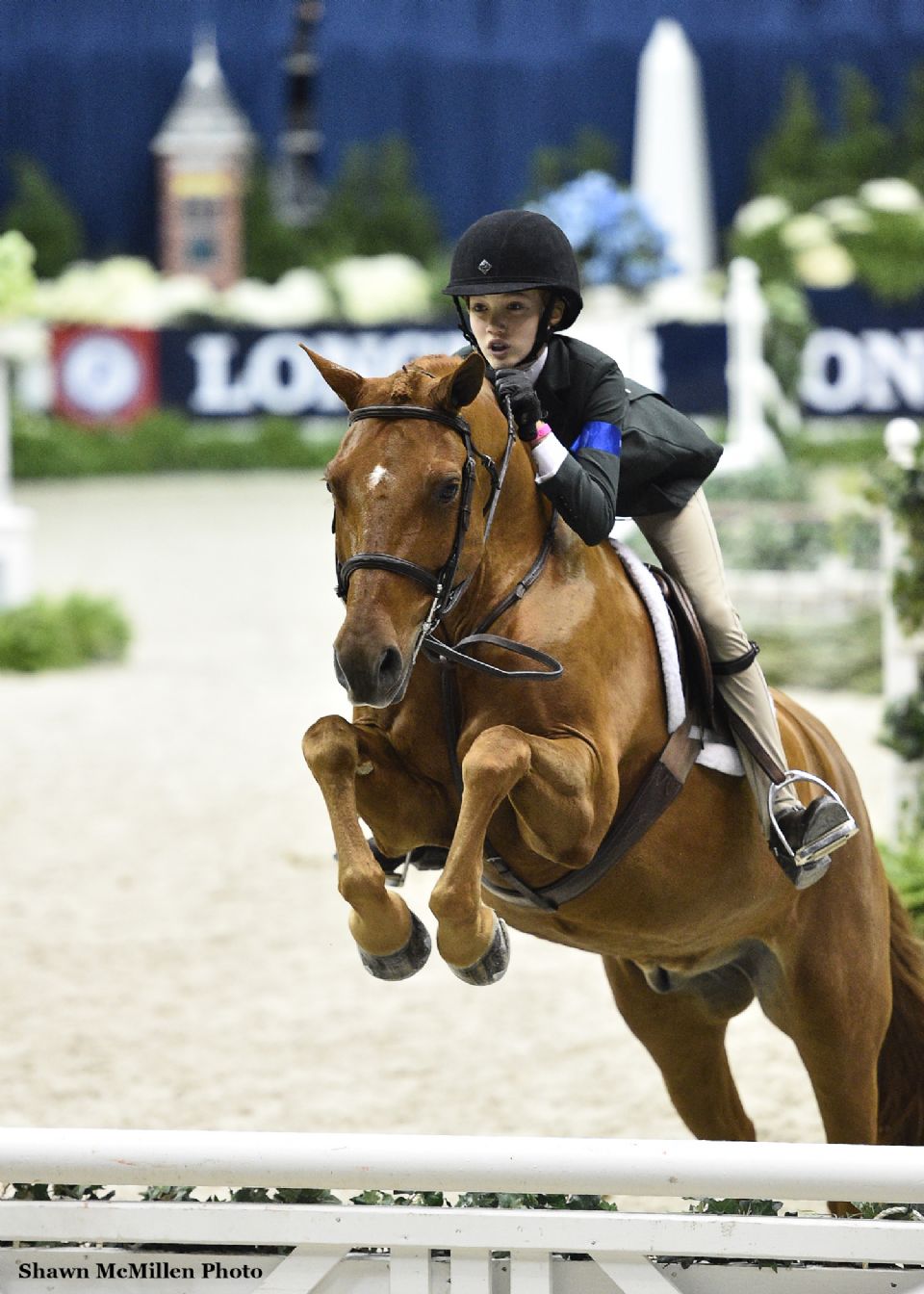 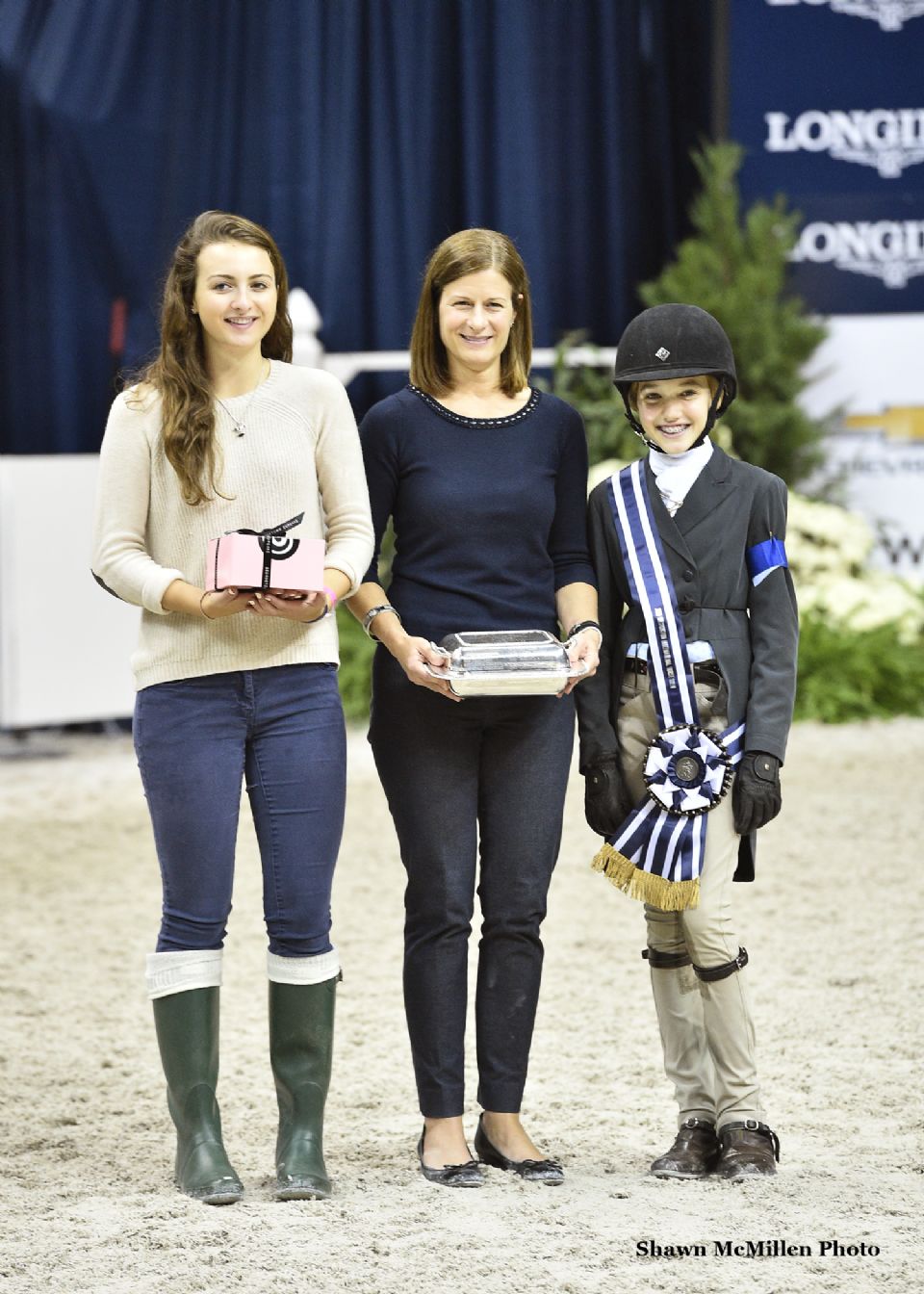 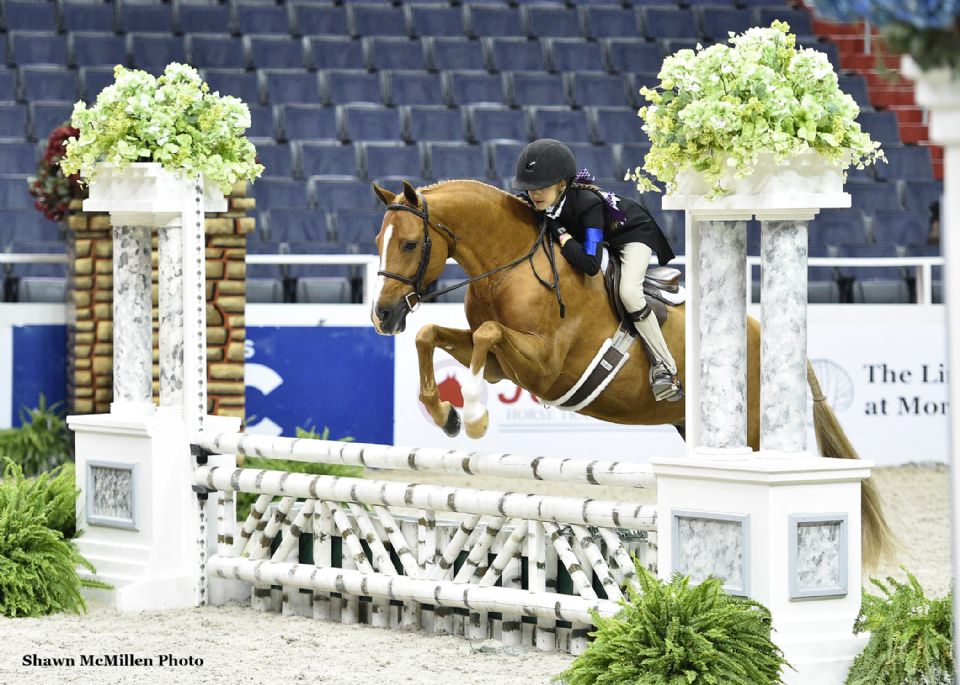 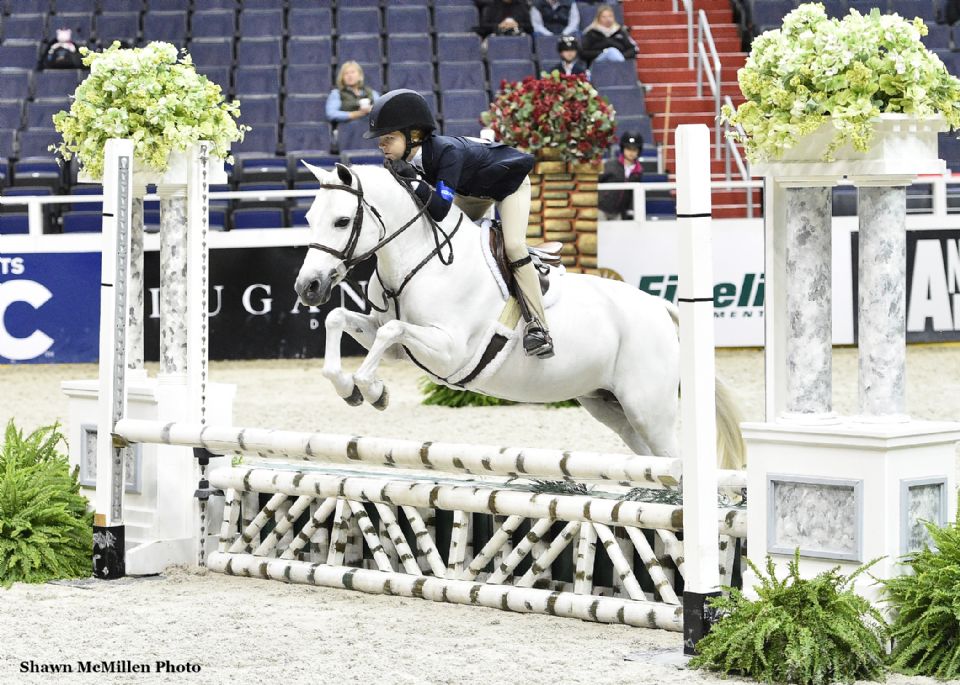 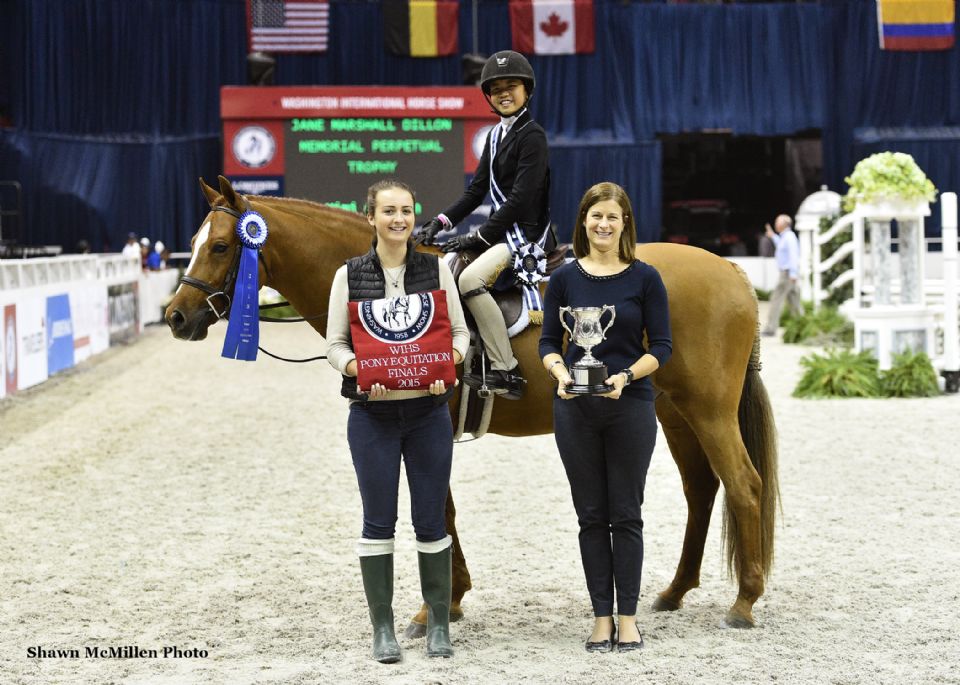 Mimi Gochman and Storyteller in their winning presentation for the 2015 WIHS Pony Equitation Finals.
Photo by Shawn McMillen Photography 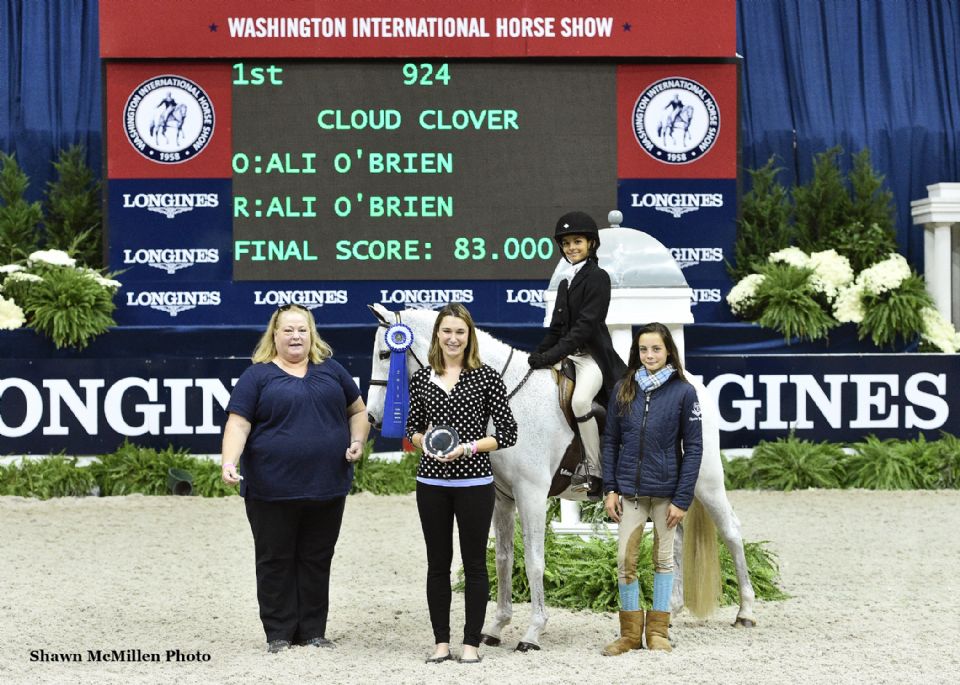 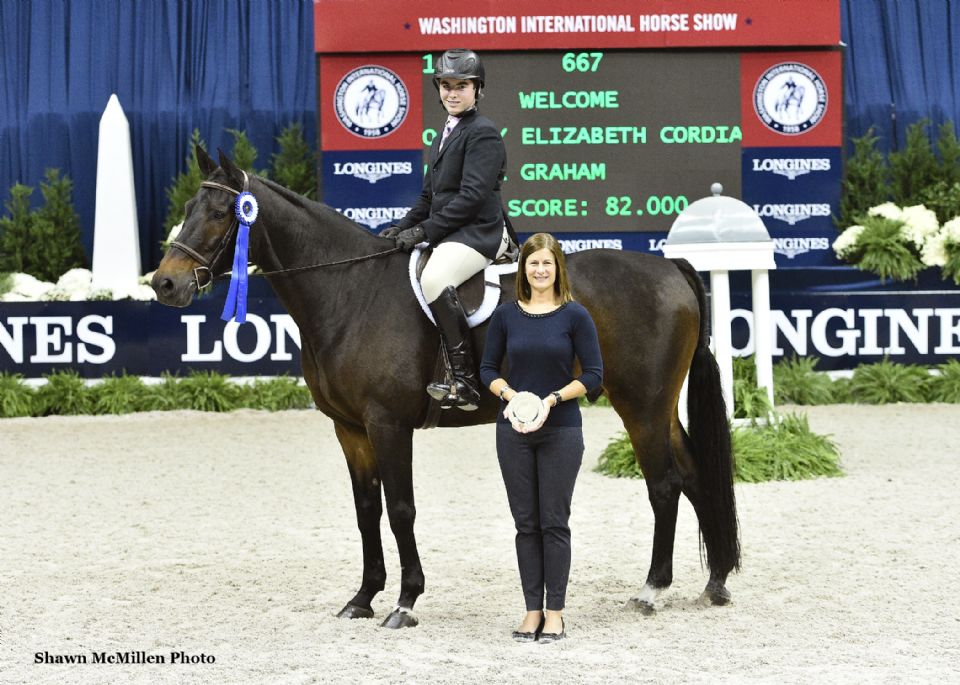 Jack Graham and Welcome in their winning presentation.
Photo by Shawn McMillen Photography

The 57th Annual Washington International Horse Show (WIHS) came to a close on Sunday after another historic week of show jumping, hunter, equitation competition in the nation's capital by celebrating pony and local champions at Verizon Center in downtown Washington D.C. The Miles River Moonglow Perpetual Trophy, donated by Scott Novick & Rustic Woods was presented to Peacock Ridge, LLC's Glynhafan Red Kestral and rider Farah Rizvi, of Wellington, FL, for Grand Champion Pony honors. The WIHS Pony Equitation Finals were held in the afternoon with a win for Mimi Gochman, and the WIHS Regional Finals capped the day with blue ribbons presented to Ali O'Brien and Jack Graham.

“It's really exciting to be in such a big arena where other big sports happen. It's usually grand prix classes that get to go in rings like this, but this makes us feel like we are a big event too,” said Rizvi.

For Rizvi, WIHS was one of the biggest goals she set for herself this year and in turn was one of the her highlight victories. “I think he [Glynhafan Red Kestral] really liked it here. He likes audiences and today it was like he saw all the people and knew everyone was watching him,” she said.

In the Large Pony Hunter Division, Rizvi and Glynhafan Red Kestral were first and third over fences before winning the stake on a score of 87 to take home The Pegasus Stable Perpetual Trophy, donated by Ms. Fenwick Kollock. Reserve Champion was presented to Augusta Iwasaki and Kingston, owned by Ava Peck, after a first and second over fences.

While Rizvi has only had the ride on Glynhafan Red Kestral for several months, the pair has quickly formulated a knack for wins. “She only took over the reins starting in the summer and she was away a lot, so for her to be able to step up and shine on this pony is a trainer's dream,” said Rizvi's trainer Christine Trigger.  “I had goosebumps for her – it's such a big accomplishment. For me, it doesn't get any better than Washington. This is a milestone show and to get a pony to step up and win here lets you know that you have a phenomenal animal.”

Rizvi acknowledged that she has recently been practicing her dressage movements in preparation to compete in FEI Pony competition at the Adequan Global Dressage Festival this winter and the extra practice may have helped her in Washington. “I think my dressage lessons have helped with my position, and all the practicing at home has made my ponies go better on the flat and helped with the jumping,” she said.

Farah was not the only Rizvi to shine at WIHS this year – her younger sister Zayna jumped Swingtown to Champion in the Medium Pony Hunter Champion and earned The Shenandoah Sundowner Perpetual Trophy, donated by Evan Coluccio and Ashmont Farms, Ltd. Swingtown, owned by Peacock Ridge, LLC, jumped to two sixth-place finishes over fences and won both the stake and under saddle. Hannah Hoch and her own Anisette were second twice over fences and fourth under saddle to claim Reserve Champion in the Medium Pony Hunter Division.

Sophie Gochman and Dr. Betsee Parker's Love Me Tender claimed the Small Pony Hunter Championship, presented by Further Lane Farm and were awarded The Stombock Saddlery Challenge Trophy, donated by Stombock Saddlery in Memory of E.P. (Bud) Stombock. Gochman and Love Me Tender were first and third over fences, in addition to third in the stake and second under saddle. Trading off wins with Gochman, Libbie Gordon and Bibby Hill's Baby Blue were Reserve Champions for small ponies after first and second over fences, and sixth under saddle.

Continuing the success of small ponies at WIHS, Claire Campbell and Armani, owned by Maher Family, LLC, jumped to the highest stake score of an 89 to earn the Best Pony Hunter Stake Award. The head-turning trip also won Campbell the EQUUS Best Performance Award for a child on a pony, as well as the Potomac Trophy for the high score junior hunter rider on a pony.

Later on Sunday, young riders competed in the WIHS Pony Equitation Finals with a win for 11-year-old Mimi Gochman of New York, NY. Trained by Scott Stewart, Gochman rode Fair Play Farm’s Storyteller to a score of 85 over fences. She came out on top after the judges tested the top four over another shortened course. Gochman was presented with the Jane Marshall Dillon Memorial Perpetual Trophy, donated by the friends and students of Mrs. Jane Marshall Dillon for the win.

Tessa P. Brown had the high score of 87 in her first round over fences and finished in second place after the test riding Radiance. Elly Ficca scored an 86 in the first round and placed third overall with It’s All Good. Caroline Ellis scored an 84 in round one and returned for the test with Cozy Up to finish fourth.

“It was really awesome to win,” Gochman stated. “My pony is the best for this kind of thing. He is easy to transition, nice jump, good for sitting - I can maybe do everything on that pony. I was a little nervous, but he was really good.”

“After I got the 85, I thought I would go back for testing, but I thought it was going to be a flat phase. I was in the schooling area doing no stirrups, turns on the haunches, sitting trot, sitting trot without stirrups, but then they announced it was jumping,” Gochman noted. “I am also confident on that, but then they told us that we had to go in the ring and have no instruction from our trainers, and that is when I was like, ‘Whoa, that’s scary.’ It was challenging, but Story helped me out very well.”

Gochman has been competing on ponies at WIHS for a few years now and always enjoys her time in the nation’s capital.

“It is really amazing how they can get all the footing in here and all the jumps and still make it safe and not scary,” she acknowledged. “The most interesting thing is being in the city, showing in the city, because it is a different environment for the ponies. It is great that Story can handle that. He does not spook a lot. He does not get scared. He can relax in any environment. I also love going to see the monuments and the White House and it is nice weather here during the fall, so it is nice to be here.”

This year marked the first time O'Brien, who trains with Cindy Newberry, has qualified for the final at WIHS after competing at the WIHS Regional Horse Show the past two years. Her score of an 83 secured the win.

Gabby Cecil and Eyes Up, owned by Sarah K. Hanks finished second on a 79, while Kate Howlin and Jamrock, owned by Wilson Sporthorse, LLC, took third with a 75. Fielding Stichman and her own Oohpa Loompa were fourth with a 73, and Jacqueline Needle rounded out the top five with her own Frostline on a 71.

“It was fantastic. I can't really imagine anything else like it,” said O'Brien after her win. “I've been riding Cloud Cover for two and a half years and she is fabulous. She has helped me grow as a rider and taught me a lot.”

Jack Graham of Sterling, VA, piloted Mary Elizabeth Cordia's Welcome to an 82 and top call in the WIHS Regional Hunter Finals. Courtney Sloan and her own Wallenda were second best on a 78, and Meghan Lane piloted Chestertown, owned by Kimberly Stewart, to a 70 for third. Megan Fitzgerald and City Smarts picked up fourth on a 61 for owners Darpin Enterprises, LLC, while Madeline McManus rounded out the top five on a 55 with her own Invesco 55.

“I was really nervous at the start, but I just went in and rode like I usually do,” said Graham concerning his first appearance at WIHS. “I was just excited to show here and it was a great experience.”

Welcome was Cordia's main equitation mount for three years before Graham got the ride on the 13-year-old Dutch Warmblood gelding. No stranger to success at WIHS, Welcome boasts a tricolor in the WIHS Regional Hunter Finals from 2011. “I started doing jumpers, but I still wanted to ride him a little so we made a deal that he would stay at my old barn and my old trainer's son [Jack] would get to ride him,” said Cordia.

Graham trains with Dave Rifkin and Sue Andrews and has been riding Welcome for just over a year. “He's the smoothest horse I've ever ridden in my life and I just love him so much,” said Graham.