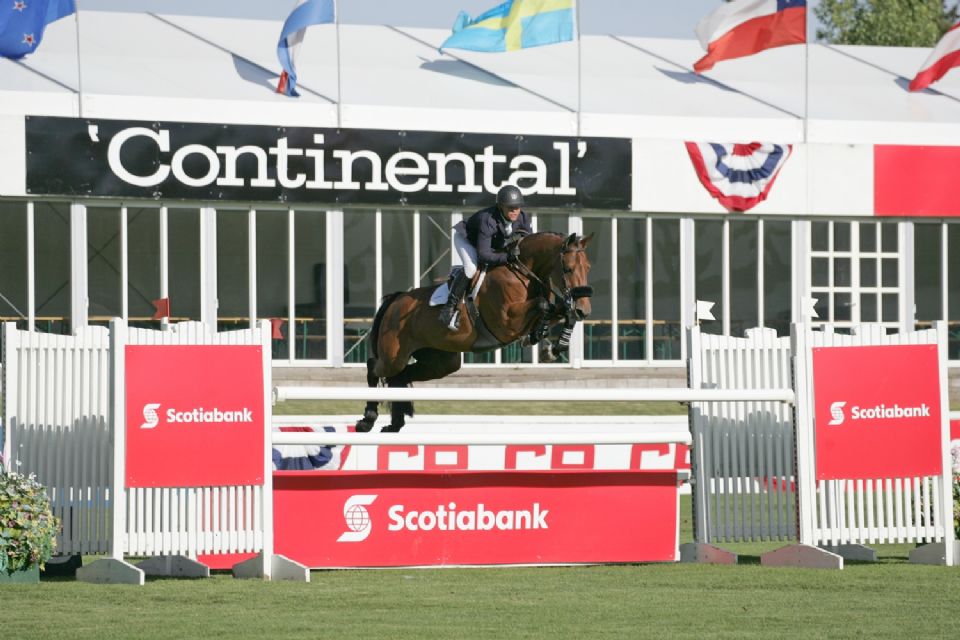 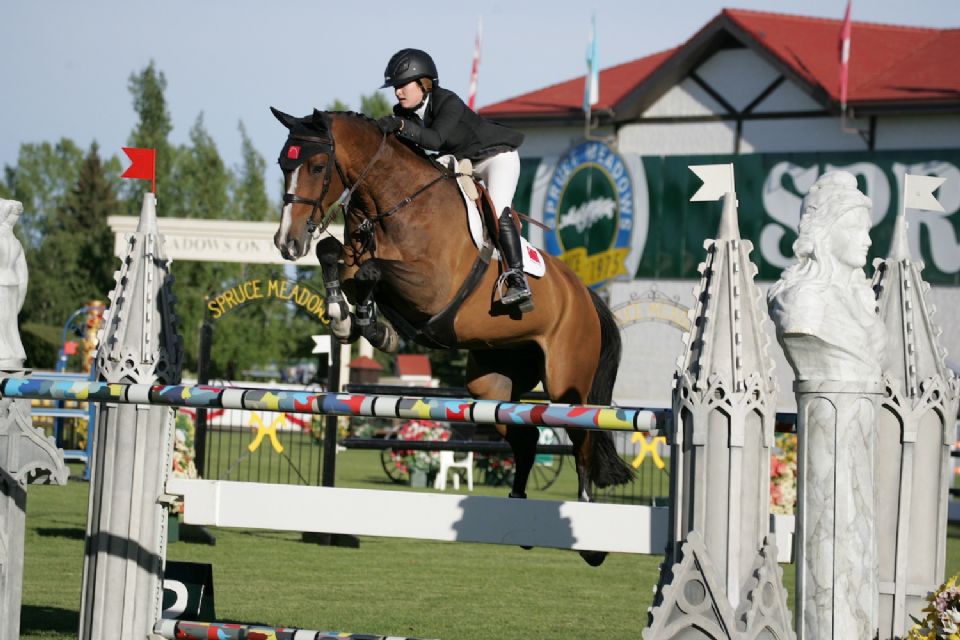 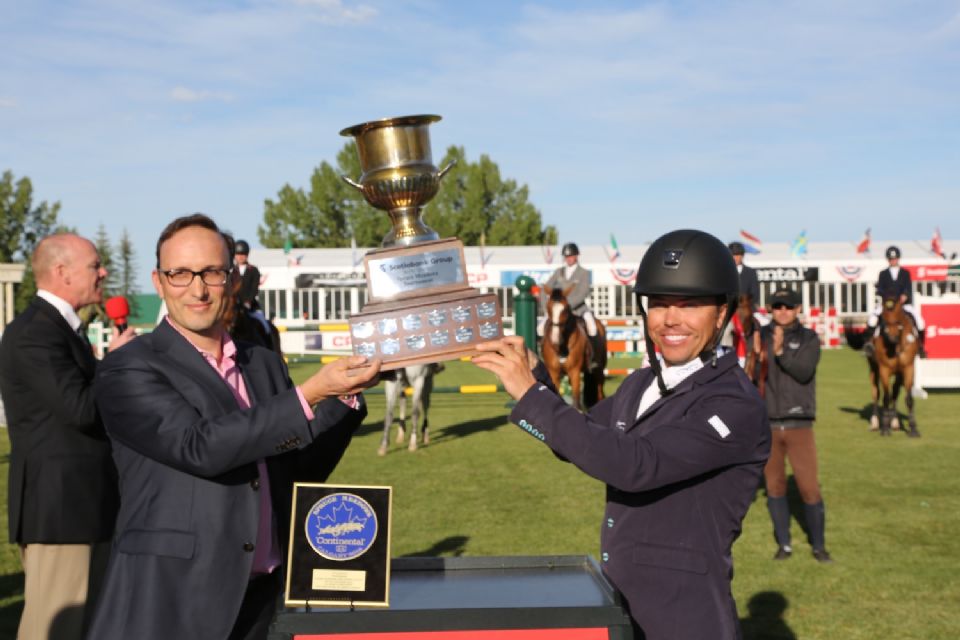 Kent Farrington raised his second trophy of the day in the Scotiabank Cup with Tony Aulicino, Managing Director of Scotiabank.
Photo by Spruce Meadows Media Services 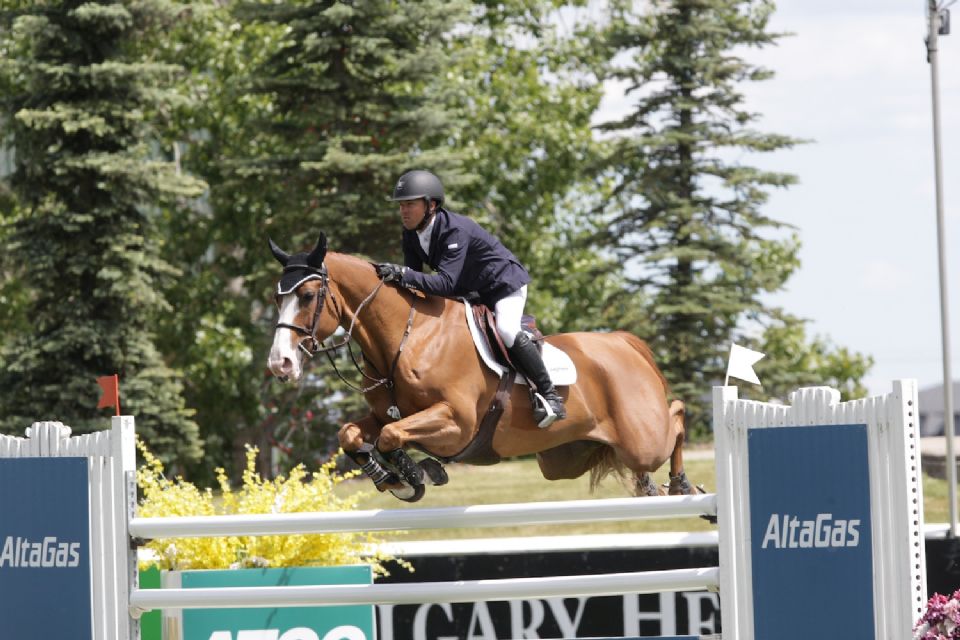 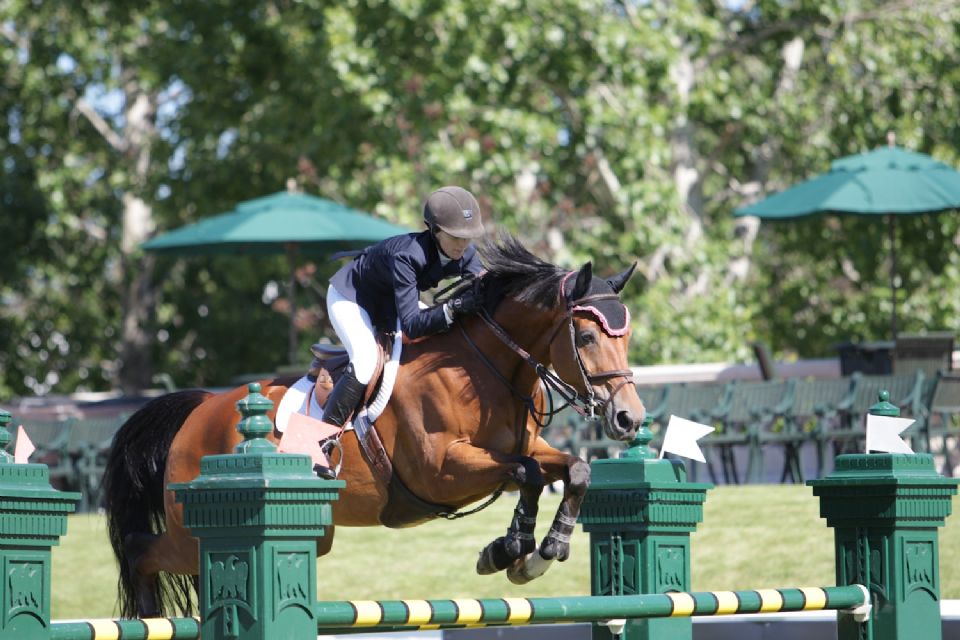 The ‘Continental’ CSI 5* Tournament at the Spruce Meadows Summer Series had more exciting show jumping competition at the Meadows on the Green with Kent Farrington and Gazelle capturing the top prize in the Scotiabank Cup 1.55m as the only clear round. Second place went to Kara Chad (CAN) on Bellinda, and third place was awarded to Peter Lutz (USA) on Robin de Ponthual. Victory in the Altagas Cup 1.45m also went to Kent Farrington (USA) on Aron S. In the Friends of the Meadows U25 Cup, Lucy Deslauriers (USA) beat a strong field for first place.

There were 35 entries that went to post in the Scotiabank Cup 1.55m. The challenging course was designed by Luc Musette of Belgium and tested the riders with a tight time allowed, large heights, and technical distances.

Farrington and Gazelle, a ten-year-old Belgian Warmblood mare (Kashmir van Shuttershof x Indoctro) owned by Farrington and Robin Parsky, were the only ones able to stay clear with no jumping or time faults.

Kara Chad is one of Canada’s rising young show jumping stars, and it looks like Bellinda, a ten-year-old KWPN mare by Namelus R x Hors la Loi II, will be one of her top horses. Their partnership began just over a year ago when she found Bellinda with previous trainers Dick Carvin and Susie Schroer as a nine-year-old.

“I think she’s a super special mare,” Chad said. “We’ve been able to grow as a partnership over the past year. Last year this week I was doing the 1.40m just trying to get to know her. It’s really encouraging to come back and do one of the biggest classes at Spruce Meadows and do well in it. I know that we’re going somewhere, and we’re learning. I’m really happy.”

Chad and Bellinda were second to last in the first round of the competition, and when Chad saw the difficulty of the course, she focused on riding a clear jumping round.

She explained, “My horse is naturally a little bit slow. She has a very lofty and scopey jump. I always have to think about the time and make up for that. After watching the course today and seeing how difficult it was, I really just focused on getting the jumps right and making sure that I was placing her properly and getting her prepared for the grand prix this weekend. I wouldn’t say time was on my mind as the most important factor, but for sure I should have thought about it a little more. I think it was good preparation. I think Bellinda is totally ready for the grand prix, and it’s just up to me.”


Farrington thought that today’s course could have been seen in a big grand prix. “You had a technical related distance to both combinations, which always poses a problem, and then you couple that with a short time allowed and some careful fences at the end, (and it) made it pretty difficult to jump clear under the time,” he said.

For Gazelle, Farrington was focused on the triple combination as a potential trouble spot. However, he was not very worried about the time allowed as he naturally rides fast and chooses places to make up time early so he can take his time at spots on course where he knows his horses may struggle.

“I thought the triple (combination) was a big ask,” he said. “A vertical, vertical, oxer always calls on their scope. I thought she handled that really well. That’s something earlier in the season that she struggled with in Florida, learning to jump the oxers in the combinations without jumping too high and then having the back rail. I’m very proud of her progress. She seems to be learning how to do that much better and more consistent. It’s really a good sign for me.”

Farrington did breathe a sigh of relief when he realized he did not have to jump off. “Yes, that’s always nice,” he said with a smile. “That hardly ever happens. You have to sit and watch the last half of the class, which is not always so fun, but it worked out for us today and we got to save her legs for the grand prix.”

Farrington brought Gazelle to the Spruce Meadows Summer Series for the past two years to gain valuable education for the talented mare, and he believes that Spruce Meadows is second to none in preparing horses for top competition.

He explained, “In general, the horses learn to really grow a bigger heart and big scope jumping on this field because they can carry a lot of gallop. The fences are so big and wide. You have some horses that just won’t accept it; they’re too careful. The ones that do accept those poles being extra wide, it makes them better (and) they learn from it. If they can jump this and can jump a big grand prix here, you can walk into almost any big grand prix in the world and feel comfortable and able to jump it.”

Farrington said he saw Swail’s ride and “thought it was a very competitive round.”

He added, “My horse is naturally quicker. I thought I took a little more of a chance. I wanted to be sure that I was ahead of him.”

There were 13 in the jump-off out of 52 entries, and seven of those were double clear. Following Farrington and Swail in the results were Molly Ashe (USA) and Pjotter van de Zonnehoeve, who were clear in 40.44 seconds. Fourth place went to Taizo Sugitani (JPN) and Avenzio, who had a time of 41.14 seconds. Tiffany Foster (CAN) and Chesney were fifth in 42.70 seconds.

This was the pair’s first FEI Ranking win since their partnership began in February. Aron S has been a consistent competitor, having placed in the top three in 1.50m competitions in Wellington, FL, and at the Royal Windsor Horse Show in England.

“He’s a very competitive horse,” Farrington acknowledged. “We did the 1.45m yesterday to get one round under his belt. I thought he really jumped great today; he was flying. If he’s going to be in that form, we’ll do a lot here.”

When Farrington first started riding Aron S, it took some time to adjust to his way of going, and Farrington quickly realized that it would take compromise.

He explained, “He likes to go his own way. If you try to have too much control, he gets upset. I started in the beginning of really trying to train him and make him more rideable. Once I felt like I got him to listen, to a certain extent, now I let him go a little more free, the way he likes to go.”

It was a good step up for Aron S into the winner’s circle, Farrington said. “It’s good for him. It’s nice because he’s been very close, and he got a good win here today. I look for more good things from him before I leave,” he concluded.

Deslauriers Gallops to U25 Victory

Sixteen-year-old Lucy Deslauriers started her Spruce Meadows Summer Series off well with a win in the Friends of the Meadows U25 Cup. She missed the opening ‘National’ Tournament, presented by Rolex, while in school, but was happy to come out to Spruce Meadows and compete in the Meadows on the Green.

“This is my third year showing here, but I’ve been coming here since I was very young, just sitting and watching my parents,” she said of Mario and Lisa Deslauriers, both top show jumpers. “It’s a very special place for me; not only to compete in this ring and at this horse show, but to win makes it even more special.”

It was a strong gallop to the final oxer on the jump-off course that sealed the win for Deslauriers, who picked up the pace when she heard her father calling for more speed.

“I heard him yelling, and I knew what I had to do,” she said. “I added one too many to the double (combination), so I knew I had to make it up somewhere. He has a really big stride, so I just tried to use that to my advantage as best I could.

“I took a bit of a flier!” she laughed. “But it was the only one I saw. It was the only way to do it, so I just kept kicking and hoping it would go well. I trust him completely. I knew if I just steered in the right direction, he would take care of it. He did just that.”

Third place went to Kelli Cruciotti and Chamonix H, winners of the inaugural U25 competition at Spruce Meadows last week. Cruciotti had a time of 42.89 seconds with no faults. The fourth double clear out of seven total in the jump-off was Jennifer Gates on Lord Levisto, who recorded a time of 46.25 seconds for fourth place.

Deslauriers commented that the footing was “amazing as always,” and was mindful of the time allowed on the first round course set by Musette.

Deslauriers will continue to compete with Hester in the U25 series at Spruce Meadows along with other 1.45m competitions. She hopes to move up to the 1.50m division to gain more experience in the larger competitions.

The Spruce Meadows 'Continental' Tournament continues on Saturday, June 18, with the McDaniel & Associates Cup 1.45m and the Repsol Cup 1.50m.

Final Results: Friends of the Meadows U25 Cup