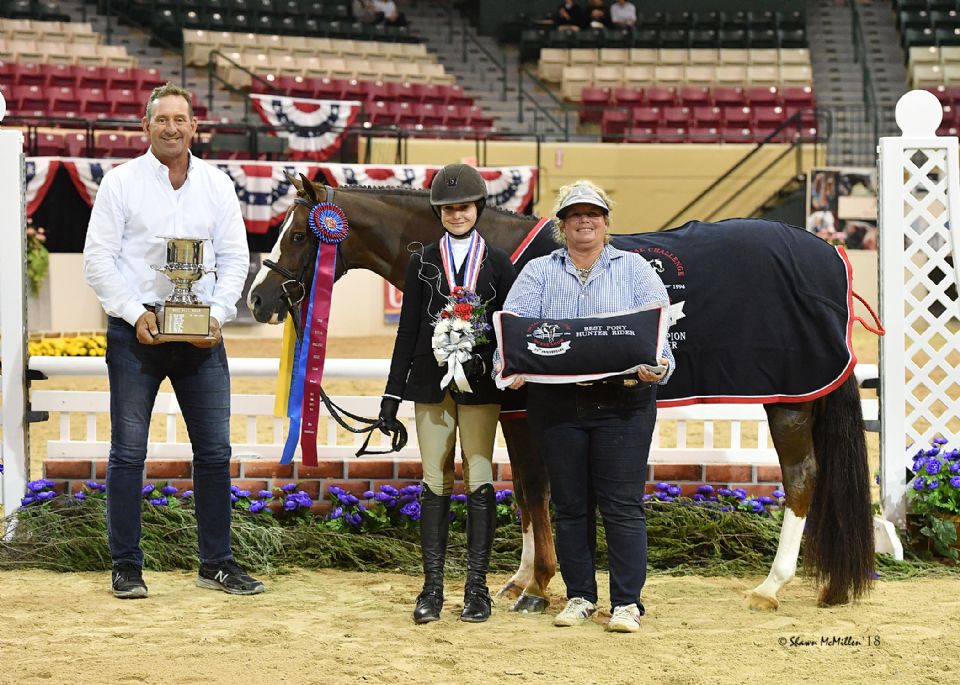 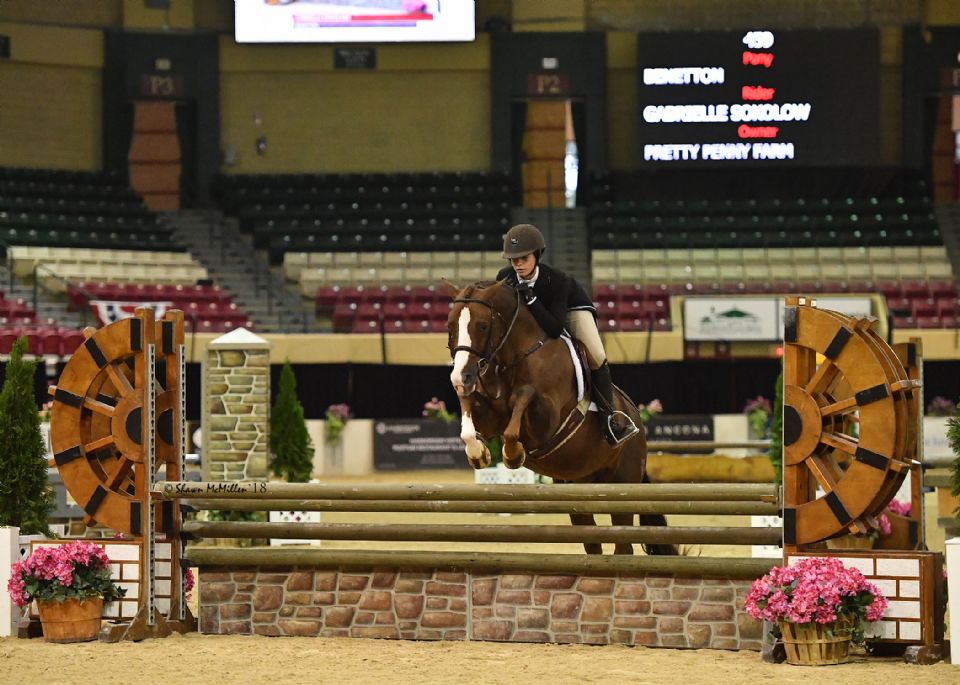 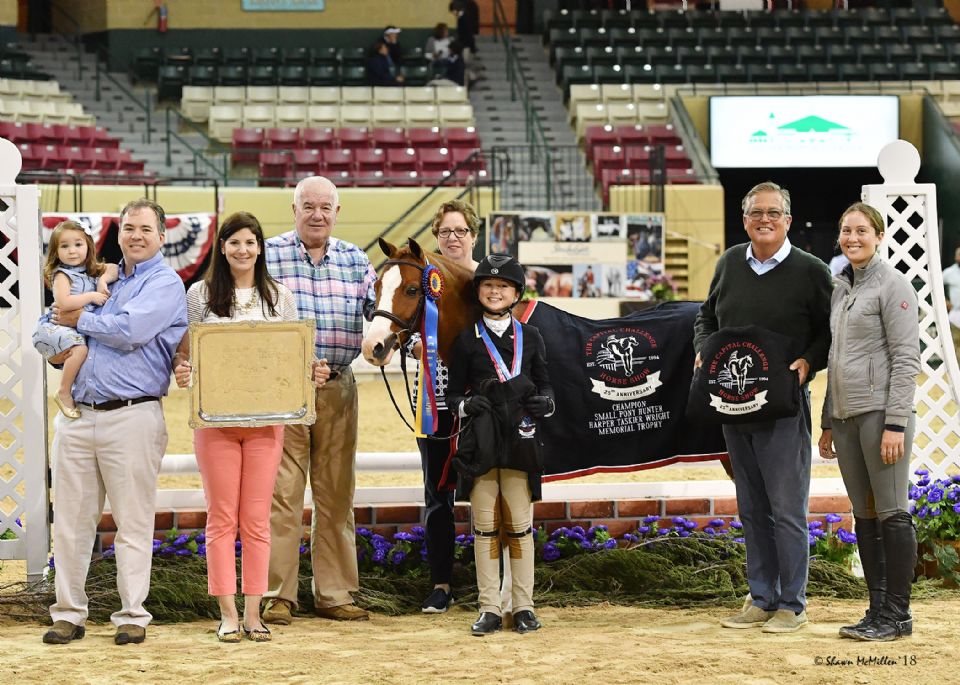 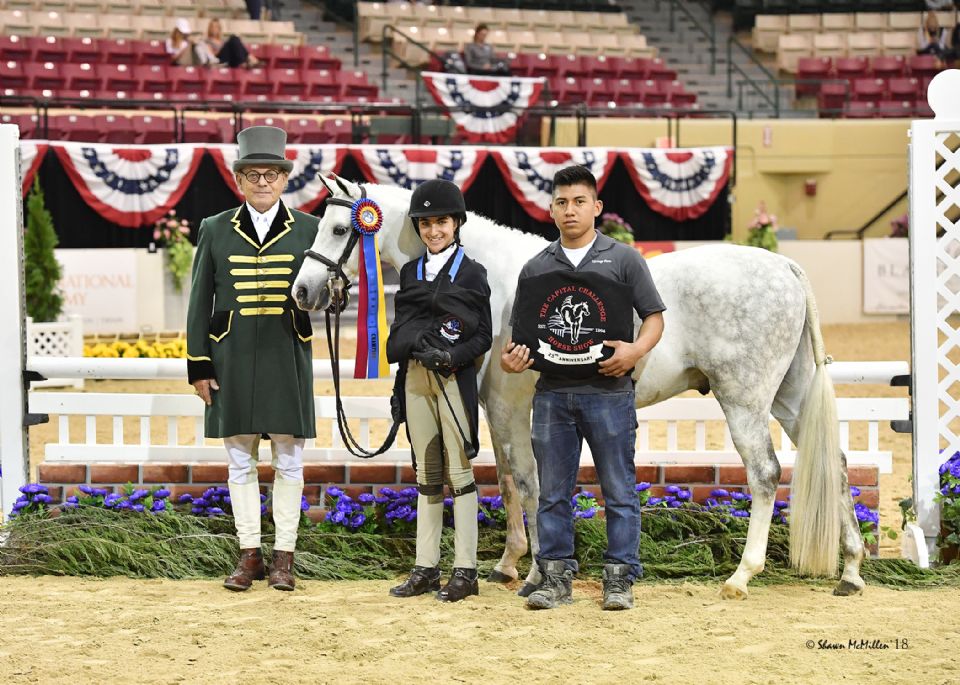 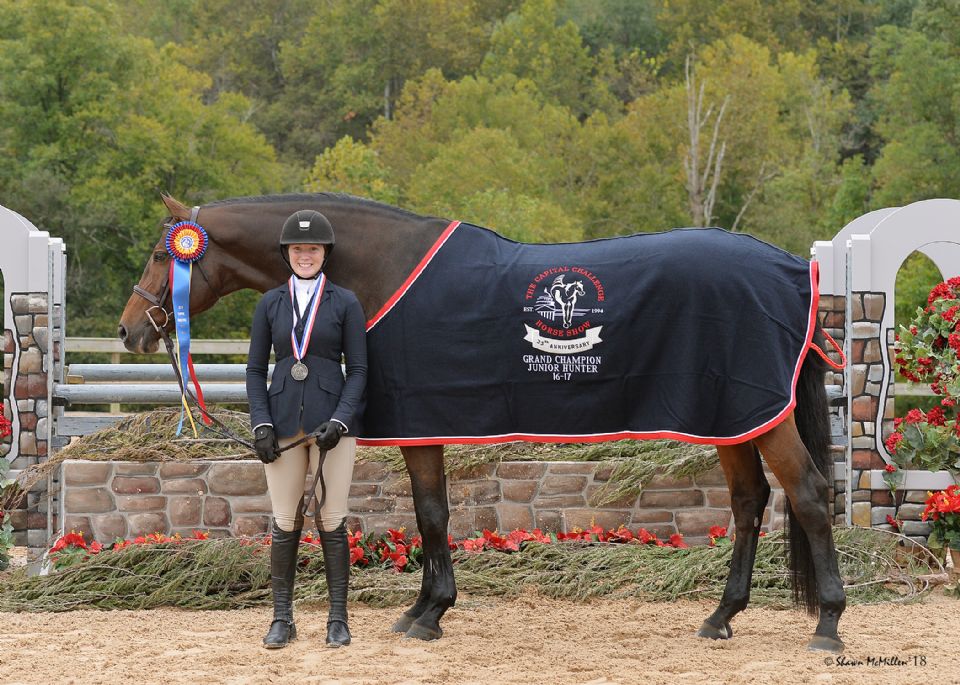 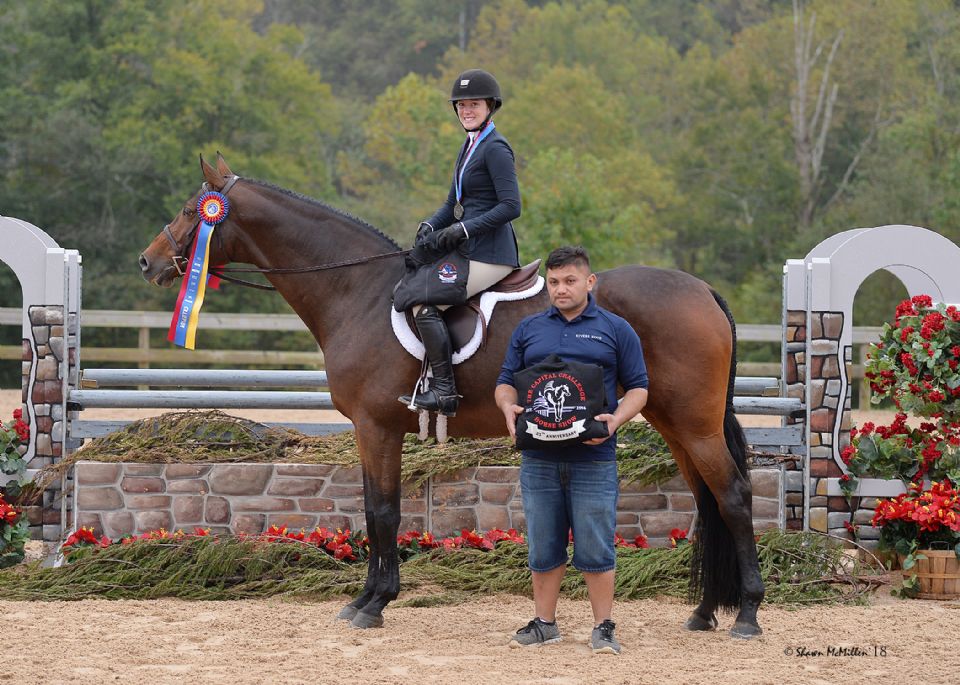 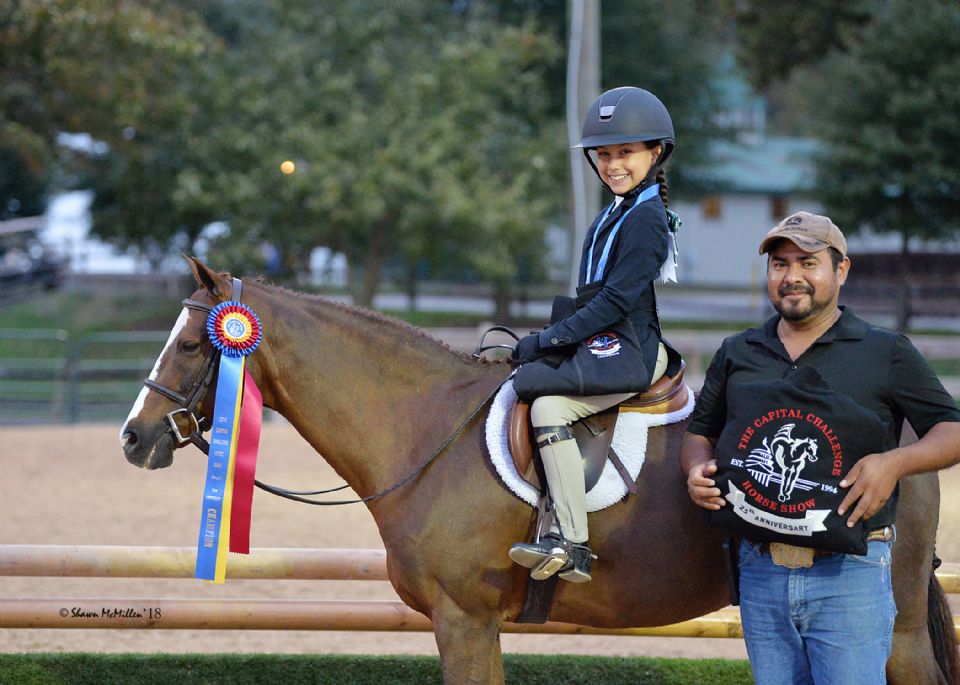 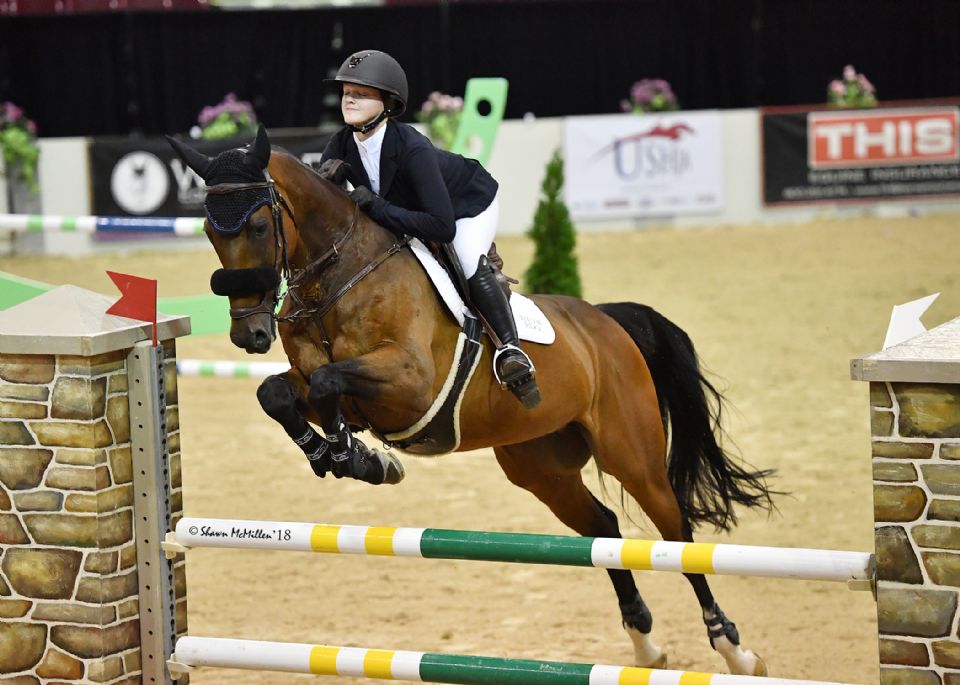 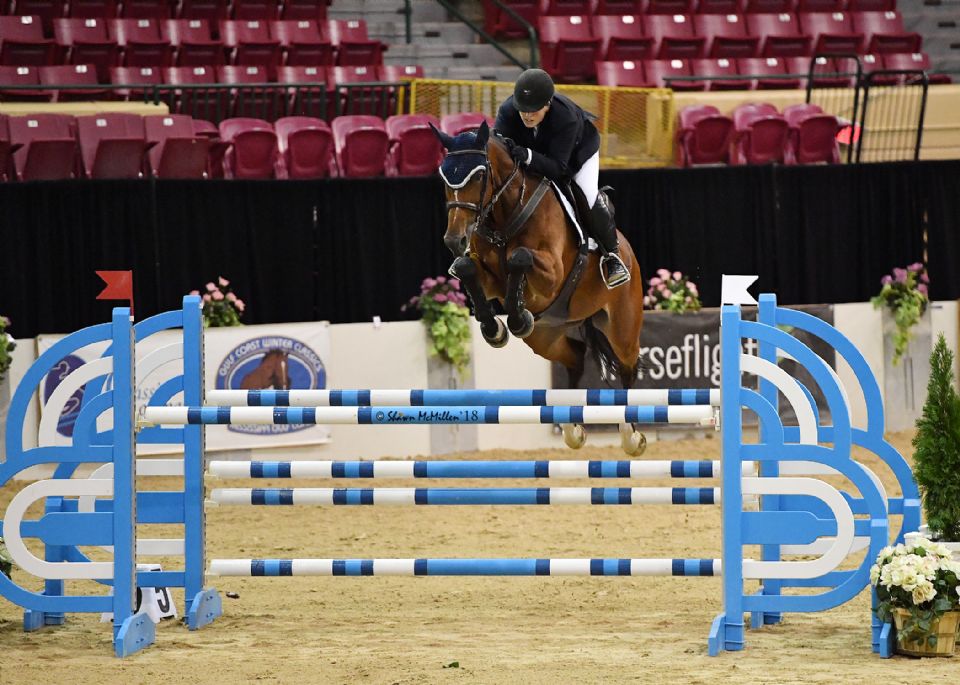 “I’m so happy about it,” said Sokolow, who trains with Elizabeth Reilly and only started leasing Benetton in May. “I love this pony. It was such a big accomplishment for me. I’ve only been riding him since Devon, so it wasn’t for very long. He goes back soon, but I’m just so happy with it.

“He’s such a good pony,” continued Sokolow. “He always tries his best to be amazing. He never really cares about anything; he’s always so focused and listens so well. And he’s so cute!”

For the grand championship, Sokolow and Benetton were awarded the VanderMoore Designs Trophy, donated by VanderMoore Designs, and Sokolow was presented with the Best Pony Rider Award, sponsored by Archibald Cox & Brookway Stables.

“To be a winner here means so much because there are so many people and it takes a village to get here,” said Sokolow, who has competed at Capital Challenge every year since 2014. “I couldn’t have done it without my trainer, my pony, all the grooms, my friends, and my family.

“I wasn’t nervous, which was good,” continued Sokolow. “I usually get nervous in here. I did all of the handy turns in the handy. I’m really happy with it. I just think about having fun.”

Finishing as the reserve champions in the Large Pony Hunter division were Brynn Kuhnell of Cincinnati, OH, and D’Artagnan, owned by Simply Ponies, LLC.

“I was really happy,” said Kettaneh, 13. “I’ve had [Farnley Corsair] since March; we're leasing him right now. He's a really sweet pony, and he just has a great brain. This is my first year here. I think it's really fun.”

Earning the Medium Pony Hunter reserve championship were Tessa Downey of Houston, TX, and her own Anisette.

The Small Pony Hunter championship went to Alexa Lignelli and Rollingwoods Knee Deep, owned by the Lignelli Family. The division’s reserve championship was awarded to Maddie Tosh and Bit of Love, owned by Dr. Betsee Parker. For the championship, Lignelli was given the Harper Taskier Wright Memorial Trophy, given in memory of Harper by her loving parents, Michael and Alexandra Borissoff Wright, and by friends and family whose lives she touched.

Additional Pony Hunter awards presented on Saturday included the EMO Trip of the Show, given to Downey and Anisette for a high score of 89.25, and the Stewart-Warner Cup, given in memory of Laurie Gilbert Stewart & Mary Warner Brown by Donald E. Stewart, Jr. and Louise Serio, and awarded to Allison Coleman of Wellington, FL.

With a clean sweep of the division, including wins in all three of the over fences classes and the under saddle, Kurtz and A Million Reasons also claimed the Grand Junior 16-17 Hunter Championship.

In the Large Junior 16-17 Hunters, Kurtz was again the championship winner, this time aboard Dedication, also owned by Parker. The reserve championship went to Chloe White of Berwyn, PA, riding Tztargazer, owned by Steve Schaefer.

The Children’s Hunter Pony Championship went to Xia Tabanou of Tomball, TX, and her own Handsome Honey Do. Winning the division’s reserve championship was Payton Flanders of Lothian, MD, and Jamrock, owned by Willson Sport Horses, LLC.

While the hunters headlined the daytime sessions on Saturday at Capital Challenge, the Junior and Amateur-Owners Jumpers had their turn in the spotlight on Saturday evening. Winning the $10,000 North American Low Junior/Amateur-Owner Classic was Madeline Schaefer of Westminster, MD, riding her own Adoctro.

A field of 33 entries contested the track set by Ken Krome, with 10 advancing to the short course. Schaefer and Adoctro were the final pair to jump-off, and when they returned, the time to beat was set at 35.211 seconds by Charlotte Jacobs of East Aurora, NY, and Darthus, owned by North Star.

While Jacobs took advantage of an inside turn on the short course, Schaefer knew she could likely still catch Jacobs’s leading time without utilizing the inside track.

“We went just around where Charlotte did the inside turn because he’s naturally fast,” Schaefer said of Adoctro, a 13-year-old Warmblood gelding, that she has had for nearly two years. “If I do a lot of tight turns and get handsy, he gets mad.”

With a leave out to the final fence and a quick finish, Schaefer not only bested Jacobs’s time, she shaved more than three seconds off of it, finishing in 32.206 seconds.

“At about halfway through the last line I heard them yelling,” said Schaefer, referring to her family gathered at the in-gate. “And I was like, ‘Okay, I’m going for it.’”

With the win secured for Schaefer, second place went Jacobs, while Ashley Foster of Brookeville, MD, and Capella rounded out the top three with a time of 36.861 seconds.

Nineteen horses competed in the $10,000 North American 1.30-1.35m Medium Junior/Amateur-Owner Jumper Classic, with only four horses jumping clean to advance to the jump-off. The first three riders posted faults on the board, so when Callie Seaman of Greenwich, CT, rode in on Jet Set DB as the last to go she knew she needed a fault-free round to win. A conservative but clean trip stopped the clock at 45.510 seconds, securing the blue and the Remy Martin Trophy, donated by Rolling Acres and Melanie Wright, for Seaman.

“I was thrilled with the first round because we’ve really been working on being smoother and calmer. I’ve been struggling a little in jump-offs because I get really excited, and I want to win,” admitted Seaman. “Sometimes I think I get a little too much into my own head. Having the benefit of knowing all I had to do was go clear kind of took a little pressure away.

“I could not ask for a better horse,” she said of the nine-year-old Belgian Warmblood mare by Ogano Sitte O purchased last fall. “I made some real mistakes in that jump-off, and I asked a lot of her. She always takes care of me. She’s a very fiery, sassy mare. She really is a winner in her heart, and she’ll fight for you no matter what. She’s just really special.”

After recovering from multiple back surgeries in recent years, Seaman made it her goal to compete at the fall indoor circuit this year, starting with Capital Challenge Horse Show.

“To end on such an incredibly high note is really exciting,” she said. “This is my first indoors in three years because of my back surgeries, and I was so excited to be here. Then I was here, and I wanted to win too! To be able to win is an incredible feeling.”

Second place was awarded to the fastest four-faulter, Jaime Auletto, who rode Brazzaville and finished the shorted course in 39.914 seconds. Third place went to Julia Curtis and Cornet’s Gold 2 for their four-fault finish in 43.138 seconds. The fastest over the shortened course was Ellie Ferrigno on Concept who crossed the timers in 39.201 seconds but saw two poles hit the dirt and was awarded the fourth place.