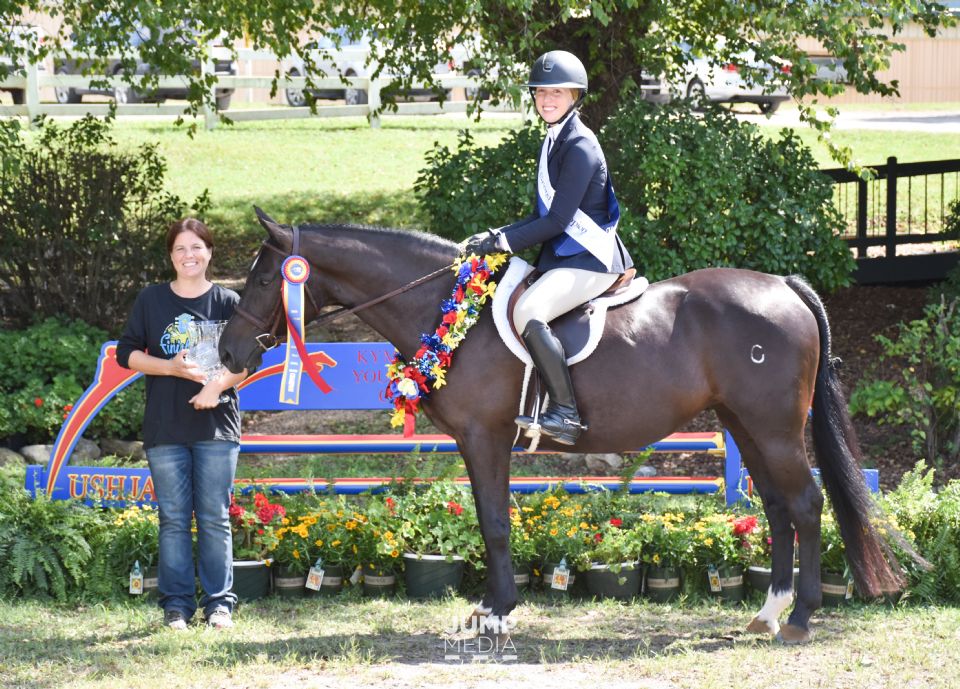 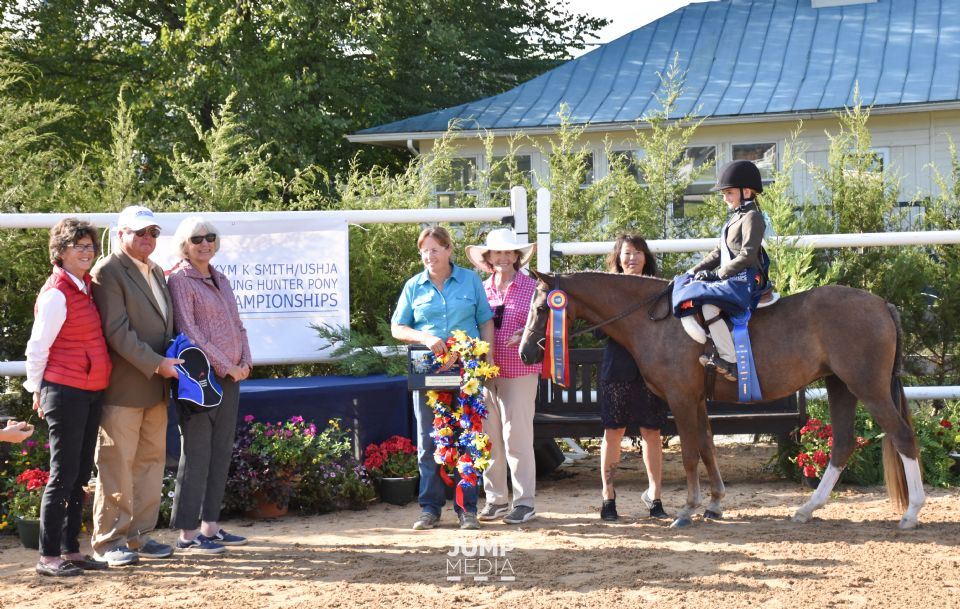 Farnley Electric won the overall championship in the Hunter Pony Five-Year-Old and Under with rider Ashley Moran and owner Hetty Mackay-Smith Abeles.
Photo by Jump Media 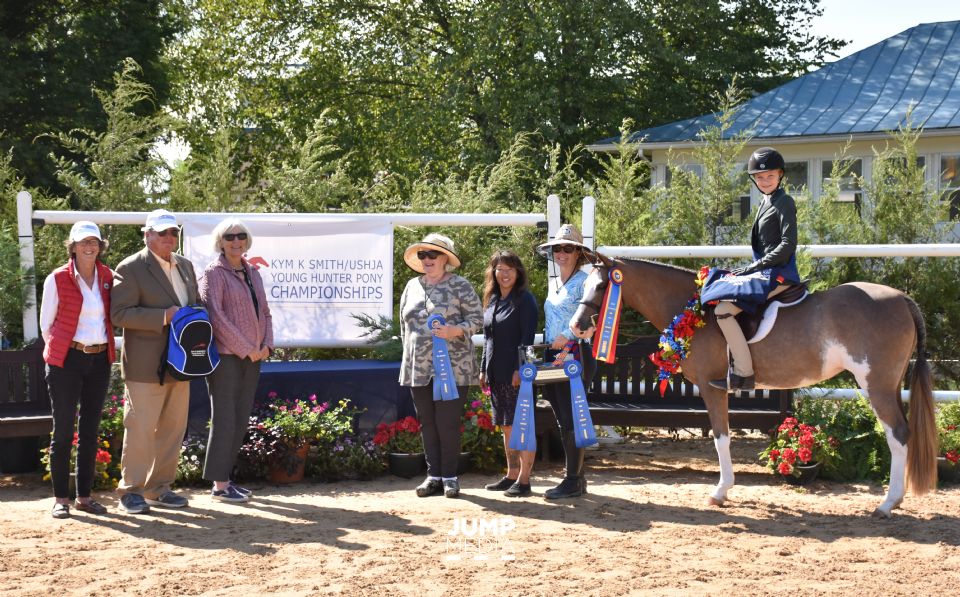 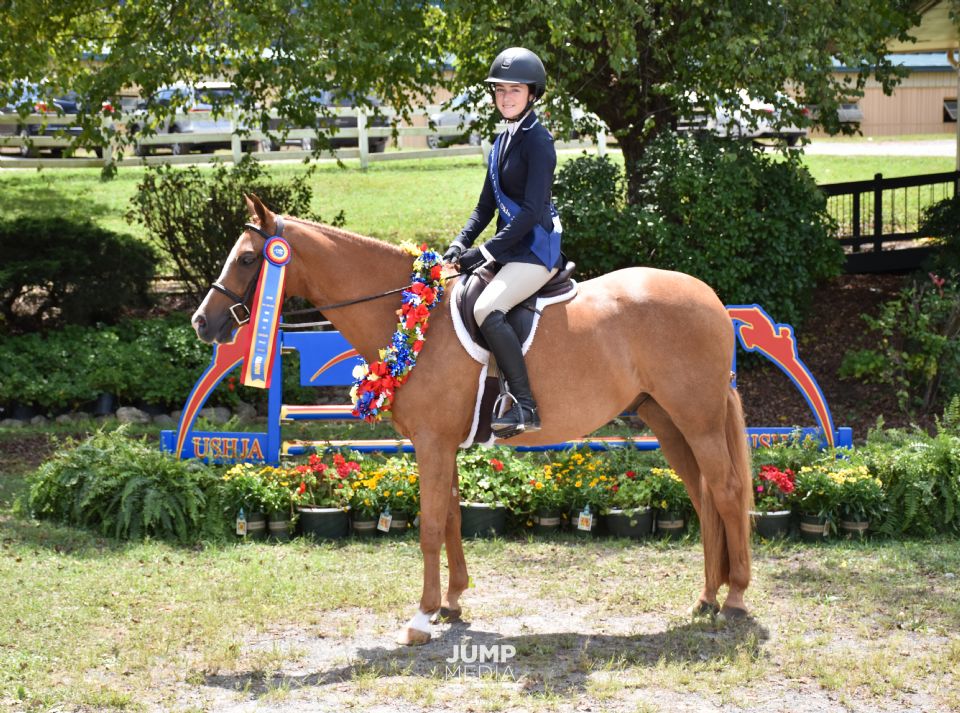 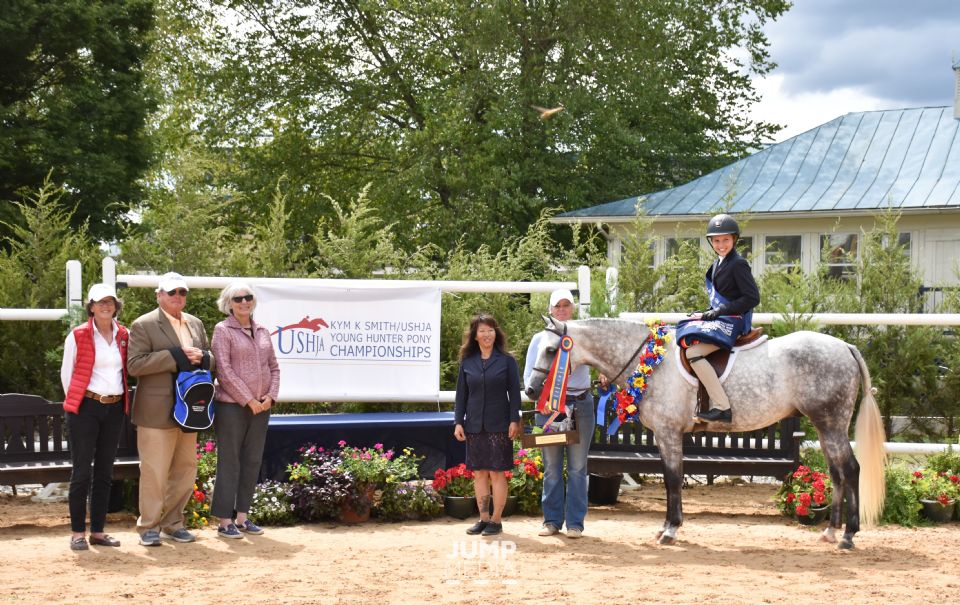 Wynnbrook Polar Vortex, owned and ridden by Amy Krebs, was champion in the Hunter Pony Four- and Five-Year-Olds 2'3 division.
Photo by Jump Media 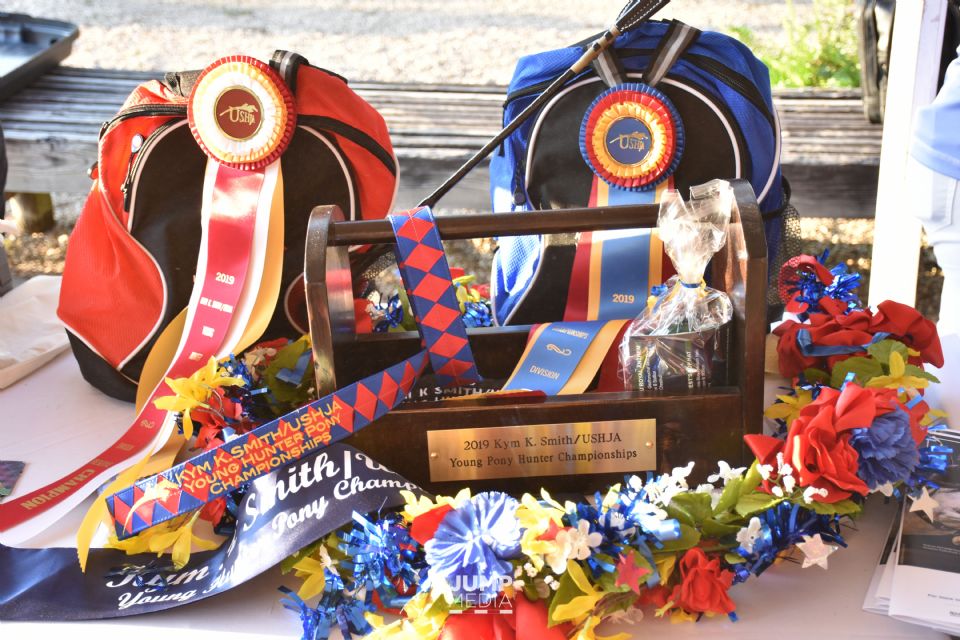 "The increase from last year was really good, in sponsor involvement and entry numbers," said Oliver Brown, chair of the USHJA Young Hunter Pony Ad Hoc Committee. "What started out as an idea is now headed in the direction we were hoping it would. We had a great inaugural event last year, and this year was even bigger and better. We hope it will continue to grow.

"Kym Smith's enthusiastic sponsorship made it even more enjoyable," Brown continued. "We're so fortunate in this industry to have so many people who sponsor things, but to have such an enthusiastic, hands-on sponsor like Kym, with all the things she brought to the table, is just a big boost for the event. The kids were beaming with all the prizes. I think this is a great thing for the industry, and I think we'll get more breeders involved with their young ponies. We want to see it become a place where the young ponies can not only have a great experience at a show, but also be recognized."

Winners in each division received ribbons, coolers, sashes, a grooming box filled with supplies, and much more courtesy of Smith and the other sponsors. "The goal is to have prizes that kids were really going to like, and I think I met that goal," said Smith. "My favorite part of today has been the appreciation from all the parents and kids. The fact that they take a moment to thank me before they leave is huge, and they're telling me that they'll be back next year with more ponies."

Laing raised Glenhaven Park Lane and, along with trainer Brooke Kemper, has developed her. "She's been beautiful from day one and conformationally had everything I was looking for. Thanks to Jordan and Brooke for doing such a great job and presenting the pony in such a great way. Jordan did a beautiful job in giving the pony a very positive experience today," said Laing. Toering meets Laing at shows to ride Glenhaven Park Lane in competition. She and the black mare won all four classes in the Hunter Pony Six- and Seven-Year-Olds 2'6" and three classes of the Hunter Pony Six- and Seven-Year-Olds 2'3" division.

Laing was thrilled with the YHPC and plans to return next year with more of her young ponies. "I'm a breeder myself, and I think it's a great opportunity to show off the young ponies," she said. "They came up with so much great swag and prize money. 'Why wouldn't you bring your young pony here?' is the better question! We had a blast; the atmosphere has been great this week. I think this will give kids a little bit more of a reason to go out and buy a young pony."

The day started with the Hunter Pony Five-Year-Old and Under Model and Under-Saddles, and the overall championship went to Hetty Mackay-Smith Abeles' Farnley Electric. Abeles, of Farnley Farm in White Post, Virginia, bred the 4-year-old mare (Farnley Triton—Farnley Eleo). Her daughter, Damaris Abeles, trained the pony, and Ashley Moran rode her. "People have kindly said that she has a lot of quality and balance," Hetty said of Farnley Electric, a purebred Section B Welsh. "She's quite correct."

Hetty Abeles also showed ponies at the inaugural YHPC and appreciates the opportunity to showcase her young stock. "It's a lovely chance for the young ponies," she said. "They don't need that long blank time in their lives waiting for something to do. I think the pony market is coming back a bit, we've noticed, and we think this will give it a good push in that direction."

As the Hunter Pony Four- and Five-Year-Olds 2' competitors finished, Annabelle Brown and Daydream Believer emerged as the champions of the division. Daydream Believer is a 4-year-old Welsh mare (Telynau Royal Anthem—Benlea Deilen) bred by Sara Longmire-Cook. Annabelle's mother and trainer, Brooke Brown, spotted Daydream Believer as a yearling in a Facebook post by her breeder.

I kept her in mind and kept an eye out for her for a year," Brooke, of Oxford, Pennsylvania, said. "[Longmire-Cook] posted a really basic trotting video of her as a 2-year-old, and I said, 'We have to have that pony.' So, I got my mom to buy her with the intention of my mom just enjoying the pony for a few years. It's worked out great. My daughter rides her, and my mom owns her. It's a real family affair." Annabelle Brown was also chosen by the judges to receive the Style Award in recognition of her riding.

"I like what they're trying to do here in promoting the pony breeding," said Brooke Brown. "Kym Smith has been so great about going out of her way to talk to everybody. She's so friendly, and the prizes are amazing. When ponies are four years old, I think a lot of times they don't get exposure to real horse shows. We baby them at the local levels, where the jumps might be just a box and a rail. Or we let them sit around. Coming here, with the flower boxes and gates and brush, everything gives them a little taste for their future. And you can gauge where you are in their training."

In the Hunter Pony Four- and Five-Year-Olds 2'3" division, Amy Krebs rode her own Wynnbrook Polar Vortex to the championship. The five-year-old Welsh cross (Clovercroft Polarized—Splash of Hope) was bred by Kristina Morris.

Krebs and trainer Michelle Zimmer drove more than seven hours from Nashville, Tennessee, to compete at YHPC. "We're supporting this program because we think it's an amazing program," Zimmer said. "[Krebs] rode last year on her other pony, who was 6, and was champion with him. I think this program helps encourage the pony breeders to keep breeding fabulous ponies. We made the drive from Nashville to be a part of it."

Krebs bought Wynnbrook Polar Vortex three months ago and YHPC was the pony's third recognized show. "He's just got a great brain; he's a fabulous pony," Zimmer said. "[Krebs is] 11 and she's done nothing but green ponies her whole life. She's fabulous at bringing them along."

The flashy chestnut Papillon was named champion of the Hunter Pony Six- and Seven-Year-Olds 2' division with owner Hannah Haines riding. The 6-year-old Welsh-Thoroughbred cross (Land's End Monarch—Indeego Girl) was bred by Richard Taylor and won on the line, including the Best Young Pony title at the Upperville Cold & Horse Show (Virginia) in 2015.

Haines and her mother and trainer, Shelly Haines-Clements, drove 11 hours from Fayetteville, Georgia, to compete at YHPC with Papillon, who had shown at just one rated show before. "We wanted someplace where we could develop him over the jumps, with inviting courses for the babies. We're hoping that we can come back next year with more than one," Haines-Clements said. "Papillon is probably one of the best babies I've ever had. He's a Land's End pony, and people have said that line is very sweet and easy, and he is that. He's wonderful around the barn, great to do everything with, and he loves to show."

Haines, whose favorite class is the model, not only enjoyed riding at YHPC, but also took the opportunity to learn from the professionals who showed in the East Coast Sallie B. Wheeler USEF/USHJA National Hunter Breeding Championships the day before YHPC. "I watched how they modeled and did the triangle format, which I'd never seen before," she said. "It was fun to watch, and I learned some things. It was all a great experience."

"I really enjoyed seeing the numbers grow from last year, which was huge," said Smith. "We doubled our numbers, which was fantastic. I had a lot of fun at the exhibitor's party, seeing all the kids and parents. I want to thank the sponsors and donors who made it all possible this year. We'll see what happens next year!"

Release and photos by Jump Media for USHJA

About the U.S. Hunter Jumper Association
The United States Hunter Jumper Association, as the official hunter/jumper affiliate of the United States Equestrian Federation, is a competition-based sport organization that serves our members through educational programs, awards and recognition, communication and rules. We provide a wide array of programs for all hunter/jumper levels, and we are mindful of the well-being of our equine partners. Additionally, we are committed to preserving the history of our sport and through our Foundation we support charitable and benevolent services. Learn more at ushja.org.