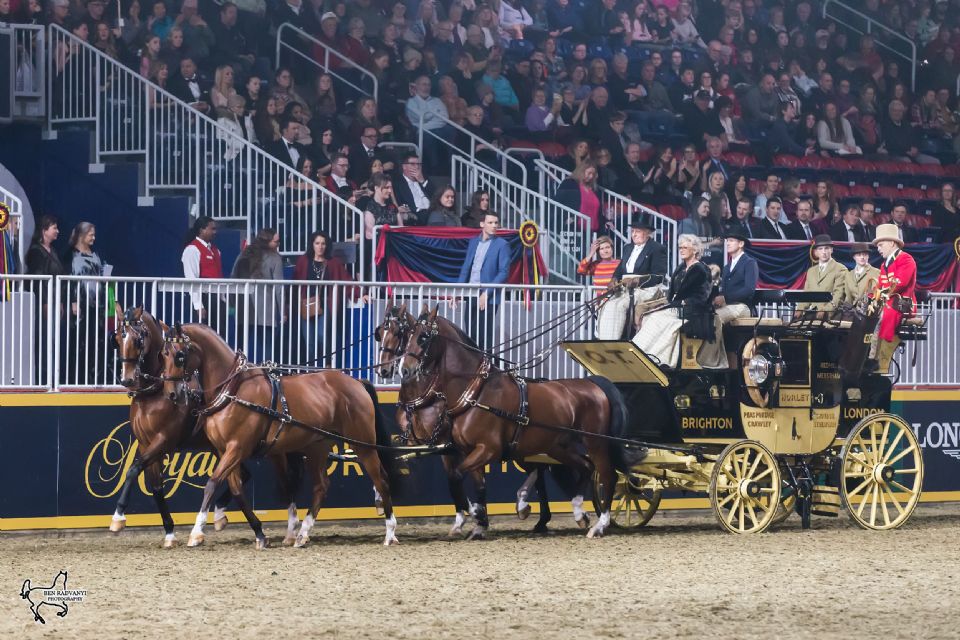 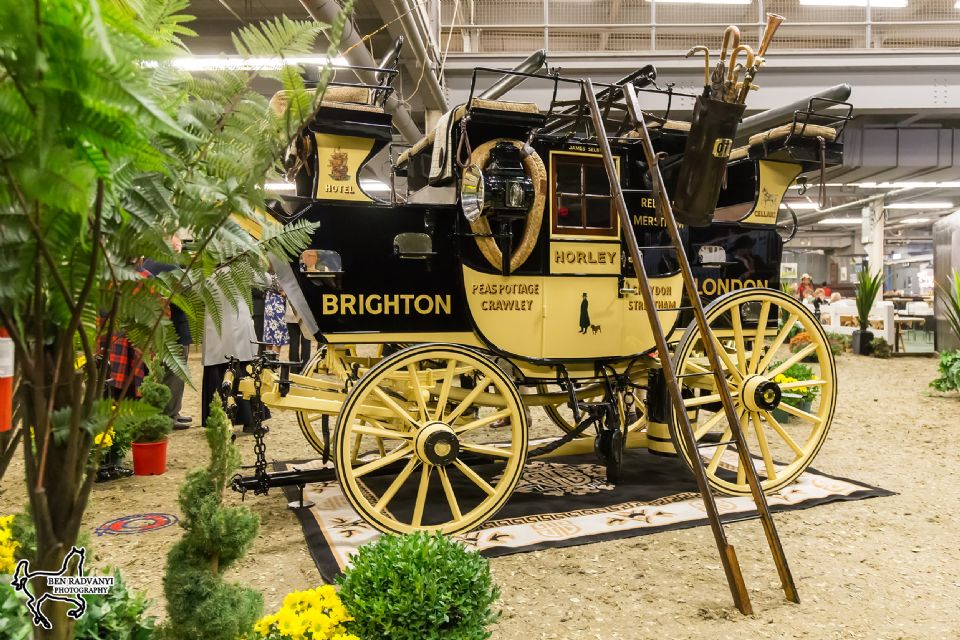 Mr. and Mrs. Harvey and Mary Waller of Stockbridge, MA, and their ‘Old Times’ coach claimed a third consecutive victory in the historic Green Meadows Four-In-Hand Coaching Appointments Class on Friday, November 9, at the Royal Horse Show, held as part of the 96th Royal Agricultural Winter Fair in Toronto, ON.

“It never gets old!” said Mary of the win on Friday night.  “It’s always special.  I love the Royal.”

The Green Meadows Coaching division, generously sponsored by Hugessen Consulting, Inc., is dedicated to the great tradition of the road coaches and park drags of years gone by, and the Waller’s ‘Old Times’ coach exemplifies a fine example of that tradition.

The ‘Old Times’ coach was famously driven from London to Brighton, England, in the 1880s.  It has since been conserved in its entirety by the Wallers, who purchased the road coach in 2001 and had the paint stripped down to find the original color and lettering, enabling it to be put back to its exact original appearance.

That attention to detail is part of what helped the Waller’s earn the win in the Coaching Appointments Class, judged on performance, presentation, and emphasis on appointments.  All three factors were taken into consideration during Friday evening’s Green Meadows Four-In-Hand Coaching Appointments Class in the Coca-Cola Coliseum, while the presentation and emphasis on appointments were also judged during a special reception on Friday afternoon.

“This is a very special coach, so it’s nice to bring it here to a special show,” said Mary.  “The way they do the appointments in the other ring beforehand showcases the coaches.  You get to see them in a special surrounding, and it makes it that much nicer.  All of our staff works so hard, so for them to see it in there after they’ve been working on it for days – and then to have us win – it’s really more for them than for us because it’s our whole team that has accomplished this!”

This year, the Wallers also had three special guests as part of their winning team for the evening’s Coaching Appointments Class.  Two-time Olympic and recent World Championship team gold medalist, McLain Ward, rode on ‘Old Times’ alongside his wife, Lauren, and their three-year-old daughter, Lilly.

“We’ve known McLain forever, and he’s probably ridden with us three or four times here at The Royal,” said Mary.  “Lilly was bracketed by mom and dad holding her in up there!  It was really fun having them with us.”

Finishing in second behind the Wallers was the Canadian entry of Gerben Steenbeek and his park drag entry for Stonecreek Fresians of St. Marys, ON.  Third place went to John P. White of Newtown, NJ, driving a road coach, ‘Excelsior,’ for Shallow Brook Farm.