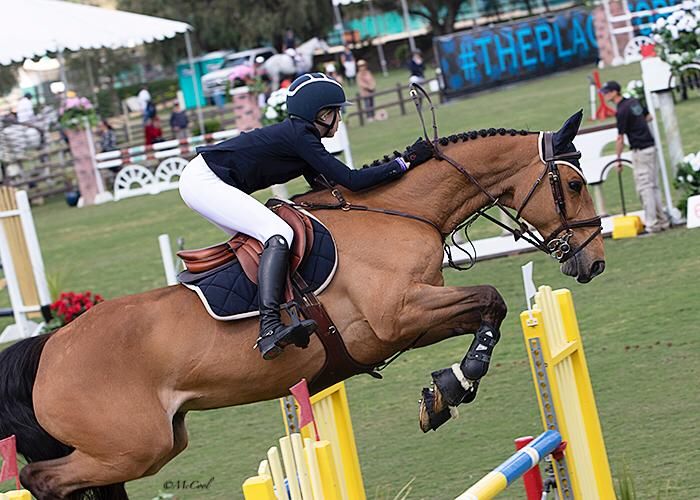 Hannah Selleck and Barla finished second in the $10,000 CSI3* 1.40m Classic at the Blenheim Spring Classic 2.
Photo by McCool Photography 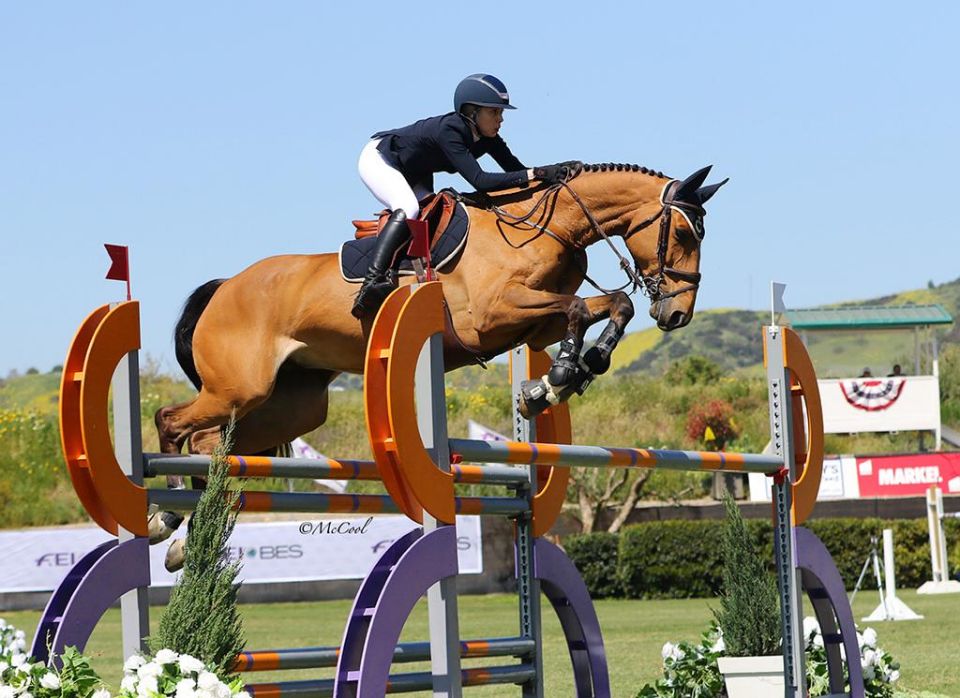 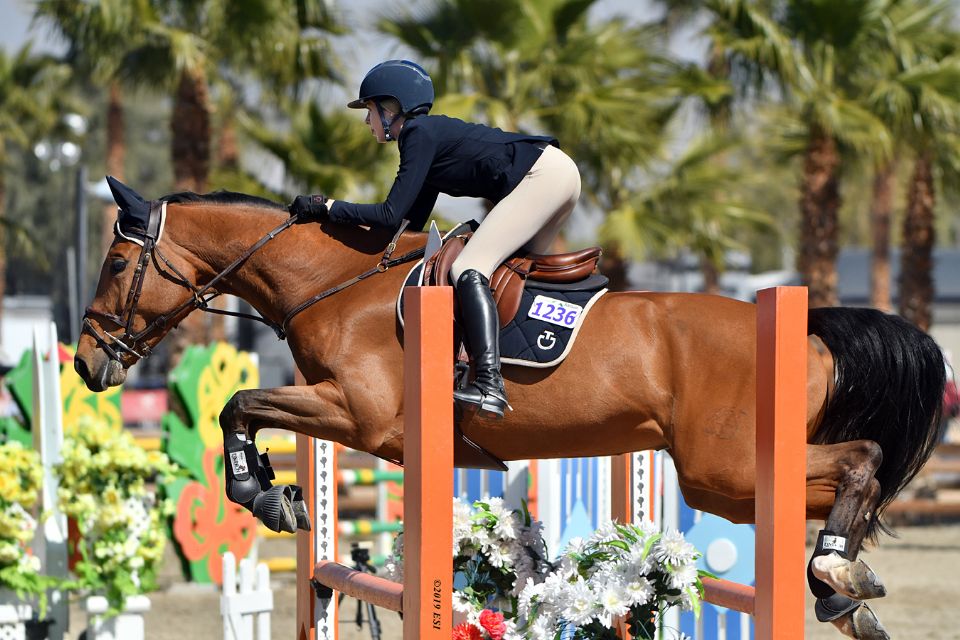 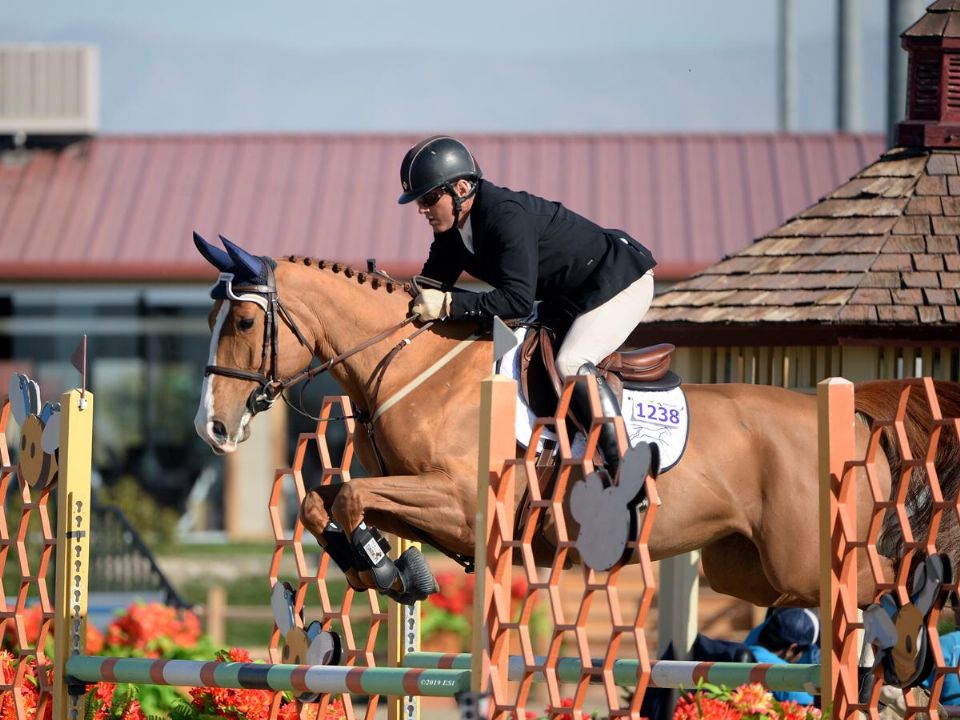 Will Simpson and six-year-old Rumpleteazer DF (by Flexible).
Photo by ESI Photography

Hannah Selleck returned to Fédération Equestre Internationale (FEI) competition for the first time in a year to take second in the $10,000 CSI3* 1.40m Classic and fifth in the $2,500 CSI3* 1.35m Speed Stake aboard Barla at the Blenheim Spring Classic 2 CSI3*, held March 27-31 in San Juan Capistrano, CA.

The top results at Blenheim marked the conclusion of a highly successful California winter circuit for Selleck, Barla, and the horses of Descanso Farm – Selleck’s own boutique breeding operation – including Descanso Farm-bred six-year-old Rumpleteazer DF, who claimed back-to-back wins at HITS Coachella and Blenheim, and seven-year-old Elita Toscita DF, who earned multiple victories at HITS Coachella.

In the $2,500 CSI3* 1.35m Speed Stake, held on Thursday, March 28, Selleck and Barla, a 15-year-old Oldenburg mare (Baloubet du Rouet x Carthago Z), laid down the first double clear round to ultimately outpace 19 of the class’s 24 entries to claim fifth in the first class of the pair’s FEI return.

Continuing to jump fault-free rounds all week, Selleck and Barla returned to the grass grand prix field on Saturday for the $10,000 CSI3* 1.40m Classic, and they were one of only four entries from the 23-horse starting field to navigate the first-round, Leopoldo Palacios-designed course without fault to advance to the jump-off. Selleck and Barla then turned in one of the only two double-clear performances over the short course, stopping the clock in 43.64 seconds to take second behind Sweden’s Alma Björklund.

“I couldn’t be happier with how Barla jumped all week; she was so good!” said Selleck, who suffered a severely broken leg in the summer of 2018 that sidelined her for several months. “We’ve been kind of taking it as it goes these last few months as I get back into riding shape, so I stepped her down a little bit to build back up together. Now, she really feels in top form and has made it easy for me to come back into these three-star and two-star classes that we’re aiming to keep doing this summer.”

Also making it easy for Selleck to successfully return to the saddle and the show ring was Elita Toscita DF (Lamarque—Tosca, Casch).

Selleck and the bay Holsteiner mare topped 50 entries to win the 1.15m Back on Track Jumpers on February 27 during the Desert Circuit VI at HITS Coachella in Thermal, CA, and the mare was also the first mount Selleck began jumping following her injury.

“Elita has ended up being my comeback horse,” said Selleck, who previously competed Elita’s dam, Tosca, to great success. “I felt the most comfortable on her right away. I needed one to use along with Barla, who is a wonderful mare, but has her quirks. It can be a little intimidating to just want to walk back in the ring on her, but I could do that with Elita. She’s just a really good, sporty, blood mare.”

Throughout the season, Selleck shared the ride on Elita with U.S. Olympic team gold medalist Will Simpson, who also claimed top places with the mare, including besting 55 entries to win the 1.20m Jumpers on March 13 at HITS Coachella.  (Catch a clip of their fast winning round here!)

Simpson also handled the ride on Rumpleteazer DF, a promising warmblood mare by Flexible that claimed impressive back-to-back wins in the Six-Year-Old Jumpers at HITS Coachella and at Blenheim.

“Rumple’s really coming along and showing a lot of potential,” said Selleck of the mare who jumped double-clear to win in a Six-Year-Old Jumper class at HITS Coachella on March 14 and followed it up with a consecutive win in the Six-Year-Old Jumpers at Blenheim on March 27.

“[Rumple]’s always been blood and scopey, but you really started to see her potential this winter,” continued Selleck. “Will’s doing a great job with her, and I’m excited to see where she ends up and what the future holds for her.”

Selleck and the horses of Descanso Farm will next head to Thunderbird Show Park in Langley, BC, to continue their spring and summer season.

“My goal right now is to enjoy each moment,” said Selleck. “It’s a blessing to be jumping so many of these classes, so I’m just trying to be present and take that in. We are goal-oriented as athletes, but you’re also constantly thinking about future plans, where you want to be, and ‘I need to do x, y, and z in order to get this result.’ Right now, I want to focus on not only having the goals, but also being more present. You want to enjoy that moment that you’re in – whether it’s in the show ring or training the young horses at home — because we are so, so lucky to work with these animals every day.”

About Descanso Farm and Hannah Selleck

Descanso Farm is a boutique breeding operation owned and operated by the Selleck family and professional rider Hannah Selleck and dedicated to producing top-quality sport horses within the United States.

Selleck got her start in the show ring at the age of 10 and, during her junior career, won team silver medals at both the 2005 Prix des States Junior Jumper National Championship in Harrisburg, Pennsylvania, and in the Junior division of the 2006 North American Junior and Young Rider Championships (NAJYRC) in Lexington, Virginia.  In 2007, Selleck was named the United States Equestrian Federation (USEF) Hunt Medal Finals Reserve Champion and the following year won the Platinum Performance/USEF Show Jumping Talent Search Finals – West.  Returning to the 2008 edition of the NAJYRC in Parker, Colorado, Selleck won individual and team gold medals in the Young Rider division and also earned the style of riding award.

Today, Selleck competes in both the hunter and jumper rings, including aboard the Descanso Farm young horses and her grand prix mount, Barla. In addition to pursuing equestrian success, Selleck is passionate about making a difference and serves as an ambassador for Brooke USA, a charity dedicated to improving the welfare of horses, donkeys, and mules in the developing world.

Learn more about Selleck and Descanso Farm at www.DescansoFarm.com.