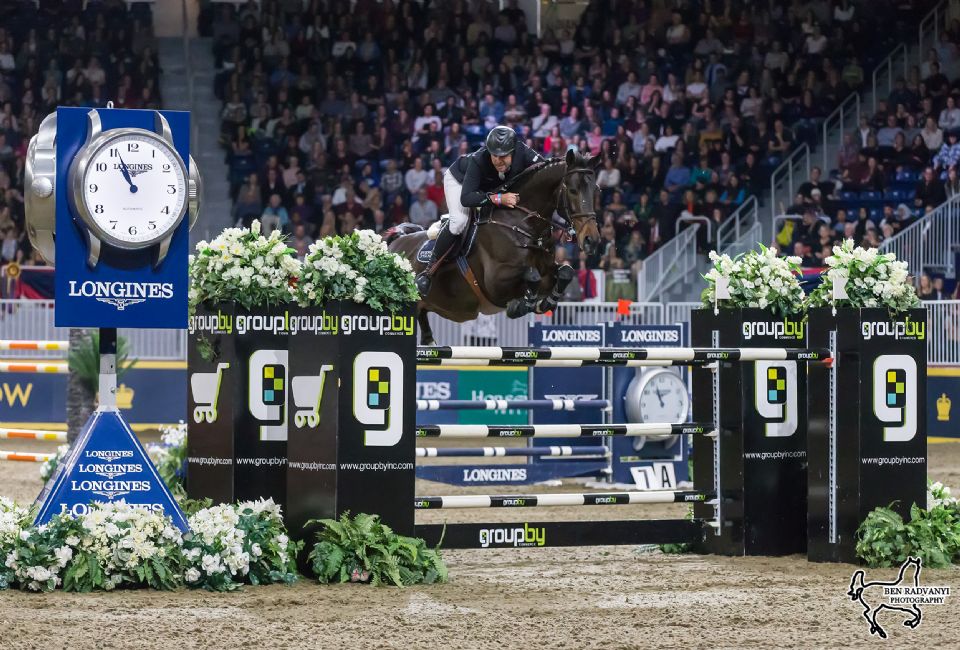 Hardin Towell of the United States conquered the $87,000 GroupBy Big Ben Challenge in front of a sold-out crowd on Saturday, November 11, riding Lucifer V for owner Evergate Stables, LLC, to close out international show jumping competition at the Royal Horse Show in Toronto, ON.
Photo by Ben Radvanyi Photography 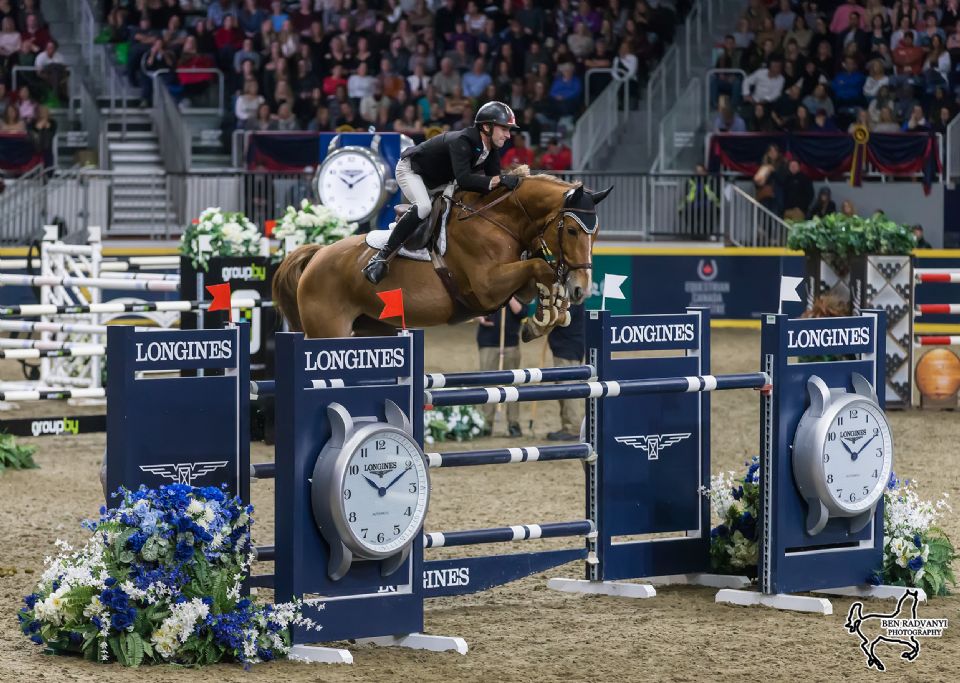 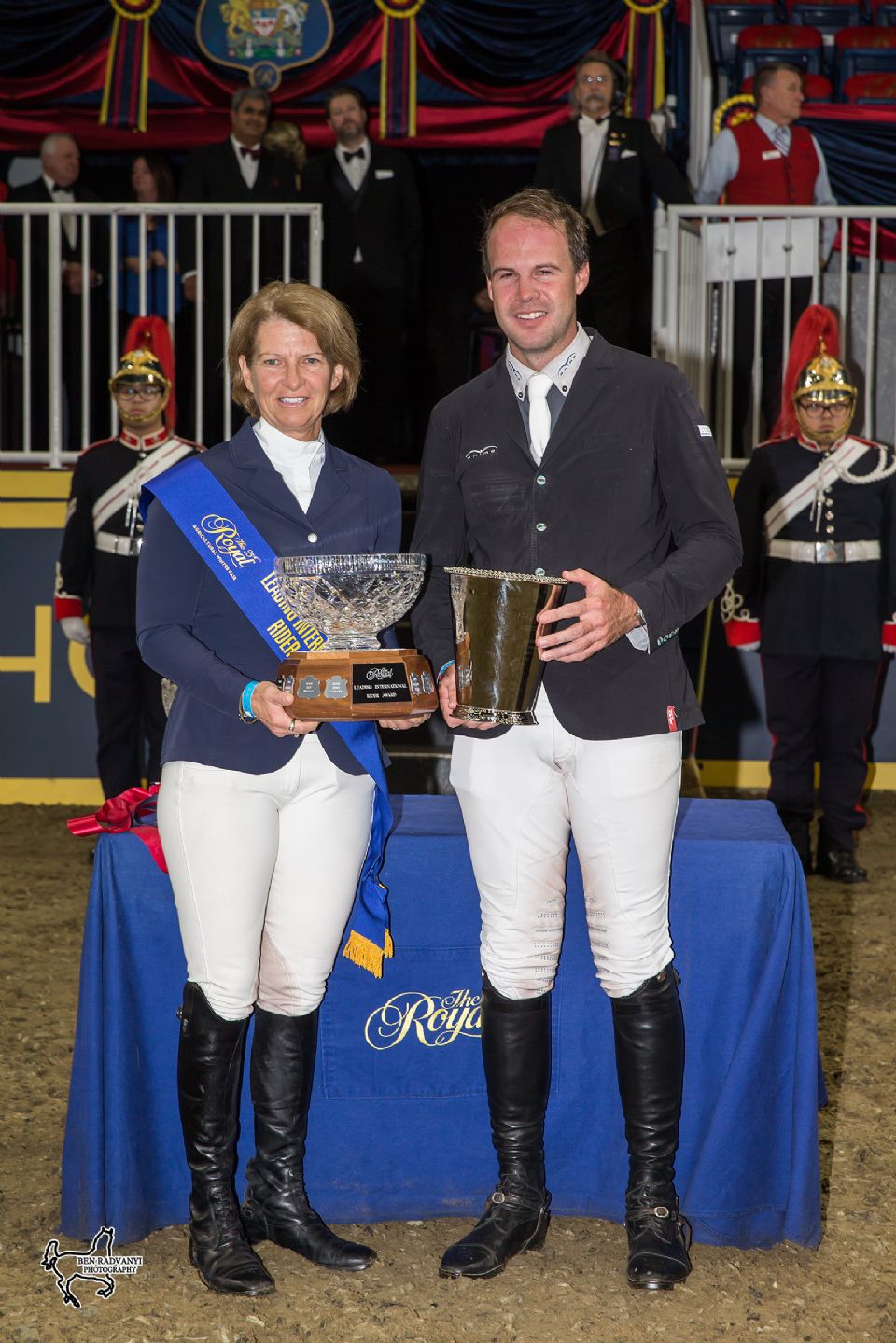 Hardin Towell and Beezie Madden, both of the United States, tied for the Leading International Rider title at the conclusion of the CSI4*-W Royal Horse Show in Toronto, ON.
Photo by Ben Radvanyi Photography 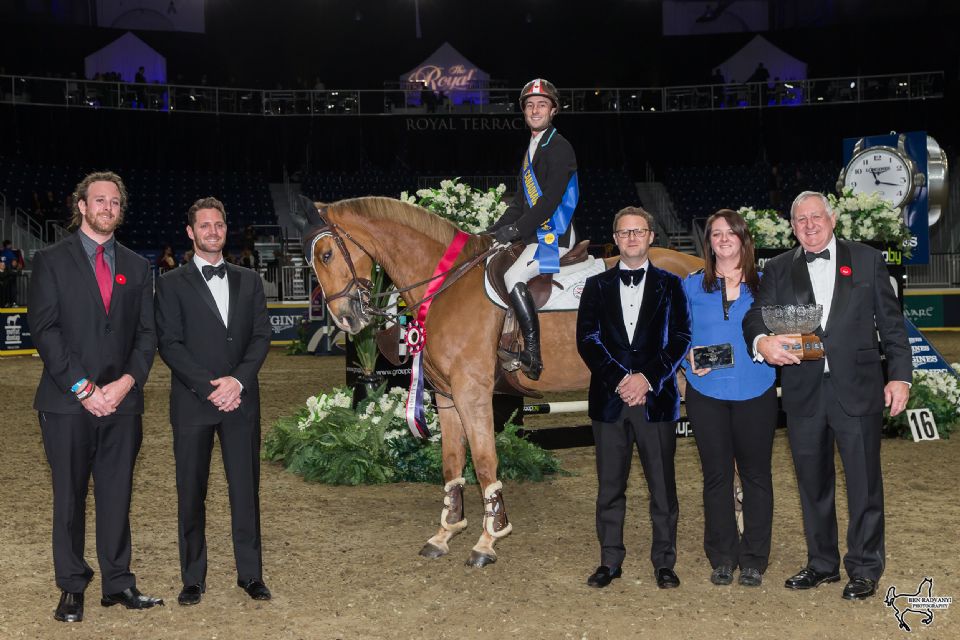 François Lamontagne of St. Eustache, QC, was presented with the Moffat Dunlap Leading Canadian Rider Award while his mount, Chanel du Calvaire, claimed the All-Canadian Cup as the leading Canadian-owned horse during the CSI4*-W Royal Horse Show. The All-Canadian Cup was presented by the Grange Family representing Lothlorien Farm of Cheltenham, ON.
Photo by Ben Radvanyi Photography 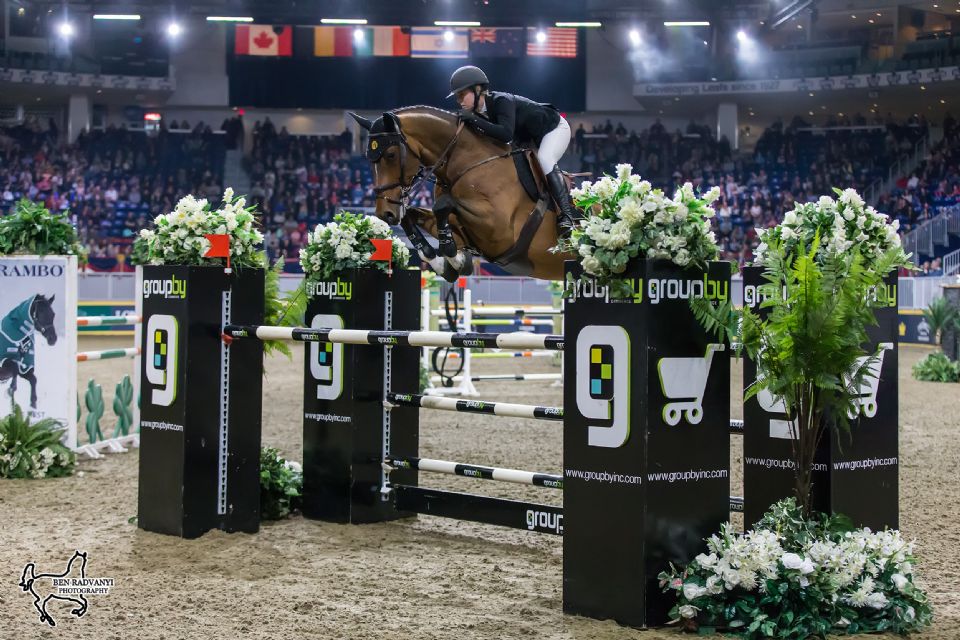 Nicole Walker of Aurora, ON, won the Alfred Rogers Uplands Under 25 National Championship riding Excellent B after first and second-place finishes in the two-phase event at the Royal Horse Show in Toronto, ON.
Photo by Ben Radvanyi Photography

Hardin Towell of the United States claimed a thrilling victory in the $87,000 GroupBy Big Ben Challenge on Saturday night, November 11, to close out the CSI4*-W Royal Horse Show, held as part of the 95th Royal Agricultural Winter Fair in downtown Toronto, ON.

A sold-out crowd of more than 6,000 spectators packed the Ricoh Coliseum and were treated to show jumping sport at its finest as 23 riders challenged the final track set by 2016 Rio Olympic course designer Guilherme Jorge of Brazil.  Eight riders, including Kent Farrington and McLain Ward, currently ranked numbers one and two on the Longines World Rider Rankings, jumped clear to advance to the all-deciding jump-off.  The night belonged to Towell, who blazed around the jump-off track with Lucifer V, breaking the timers in 38.37 seconds to snatch the win from Canada’s own François Lamontagne, 33, of St. Eustache, QC, who had stopped the clock in 40.92 seconds aboard Chanel du Calvaire.

“This is my first time at The Royal and it was fantastic!” said Towell, 29, who also won the $35,000 Jolera International Jumper event on Tuesday, November 7, aboard another mount, New York.  “It is nice to win here because the classes are so special.  The atmosphere is amazing, and the crowd was great tonight.

“I have believed in Lucifer since I first started riding him and we really came along together,” continued Towell of the 11-year-old Westphalian gelding (Lord Dezi x Grandeur) owned by Evergate Stables that he has been paired with for four years.  “I went to my first World Cup Final with him, jumped my first five-star grand prix with him, and he has helped me get to the next level.”

Lamontagne had the Canadian crowd behind him as he gave his best effort on closing night.  For his impressive performances on home soil throughout the Royal Horse Show, Lamontagne earned the Moffat Dunlap Leading Canadian Rider Award while his mount, Chanel du Calvaire, was presented with The All-Canadian Cup as the leading Canadian-owned horse.  The All-Canadian Cup was established by the late Susan Grange and presented by the Grange family representing Lothlorien Farm of Cheltenham, ON.

“To do the international division at The Royal is a dream that I have had since I was a child,” said an ecstatic Lamontagne, 33, who is no stranger to success at the Royal Horse Show, having competed in other divisions in the past.  He topped the Jump Canada Talent Squad Final in 2011 riding Barron, a horse that Lamontagne developed and went on to win a team silver medal for the United States at the 2016 Rio Olympic Games paired with Lucy Davis.

“It was really special to show here this week,” continued Lamontagne, who also claimed the title of Reserve Canadian Show Jumping Champion on opening weekend.  “It doesn't happen often that there are so many people that come to watch show jumping, and the atmosphere was amazing tonight!”

“I just took the week class by class, and it is amazing to be tied with someone like Beezie Madden at the end,” said Towell of his Leading International Rider title.  “She is one of the best in the world, and the title is icing on the cake after two wins.”

The future stars of show jumping sport were highlighted on Saturday afternoon in the Alfred Rogers Uplands Under 25 National Championship.  Nicole Walker, 24, of Aurora, ON, earned the coveted championship title after winning the opening phase of competition on Thursday and taking second in phase two on Saturday riding Excellent B.  Reserve Champion honours were presented to 19-year-old Alexanne Thibault of Boucherville, QC, who won Saturday’s final phase riding Chacco Prime.

Horse and dog lovers alike had something to cheer for on Saturday afternoon when the $20,000 Canine-Equine Challenge, presented by the Toronto Star, paired top international riders with a ‘Superdog’.  After riders navigated a show jumping speed track, their canine partner raced around a dog agility course that included ramps, tunnels, and a final puissance jump.  Always popular with the crowd, the relay-style event saw Ireland’s Richie Moloney take the win riding Alsvid with a time of 34.76 seconds partnered with Party, a Bearded Collie.  Canada’s own Erynn Ballard of Tottenham, ON, finished as the runner-up in 36.35 seconds aboard Bella Donna, owned by Sagamore Farms.  Her canine partner was Shrek, a deceivingly-fast Rottweiler.