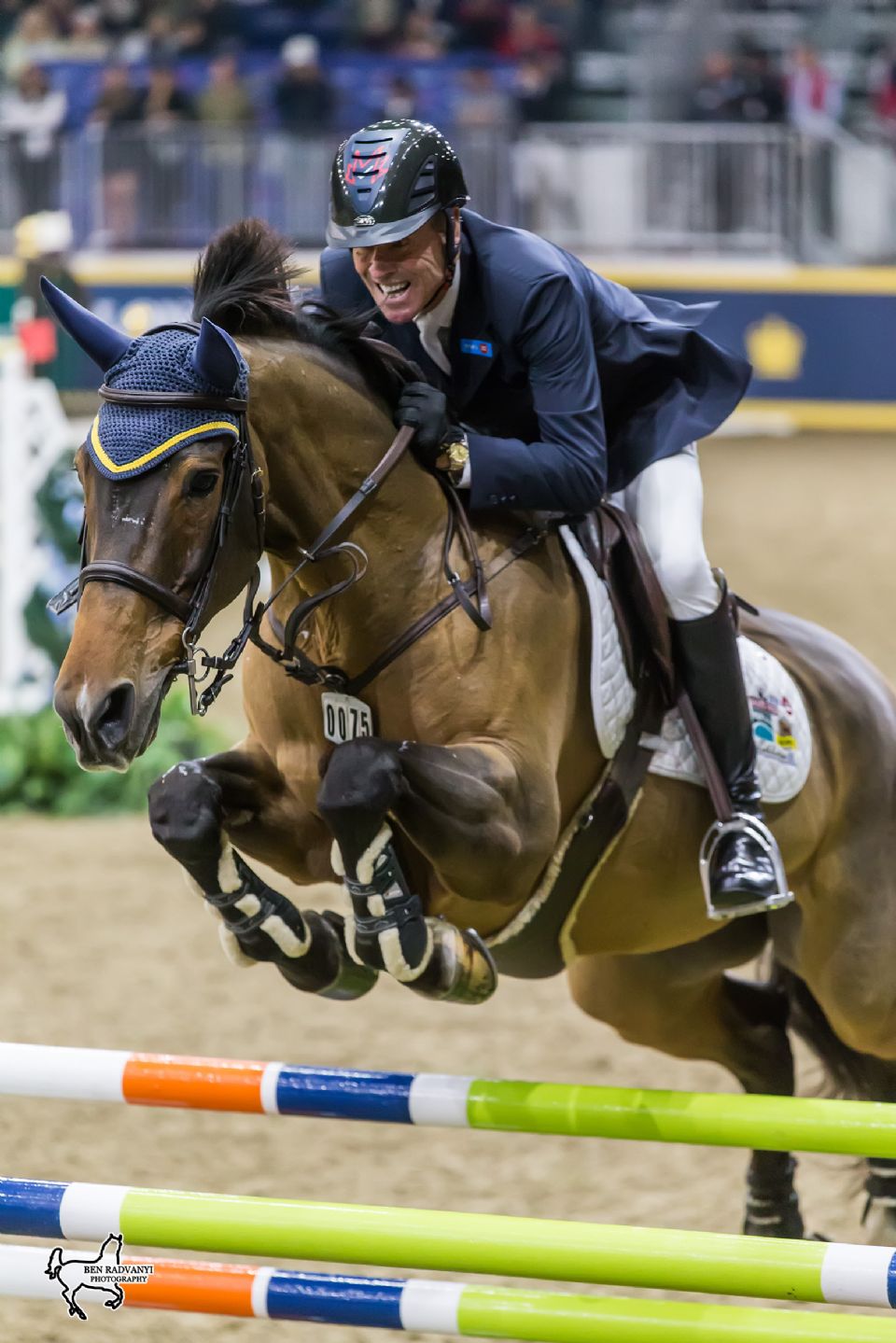 Ian Millar of Perth, ON, riding Dixson is aiming for a record 13th Canadian Show Jumping Championship title after winning the opening round of competition on Friday, November 3, at the Royal Horse Show in Toronto, ON.
Photo by Ben Radvanyi Photography 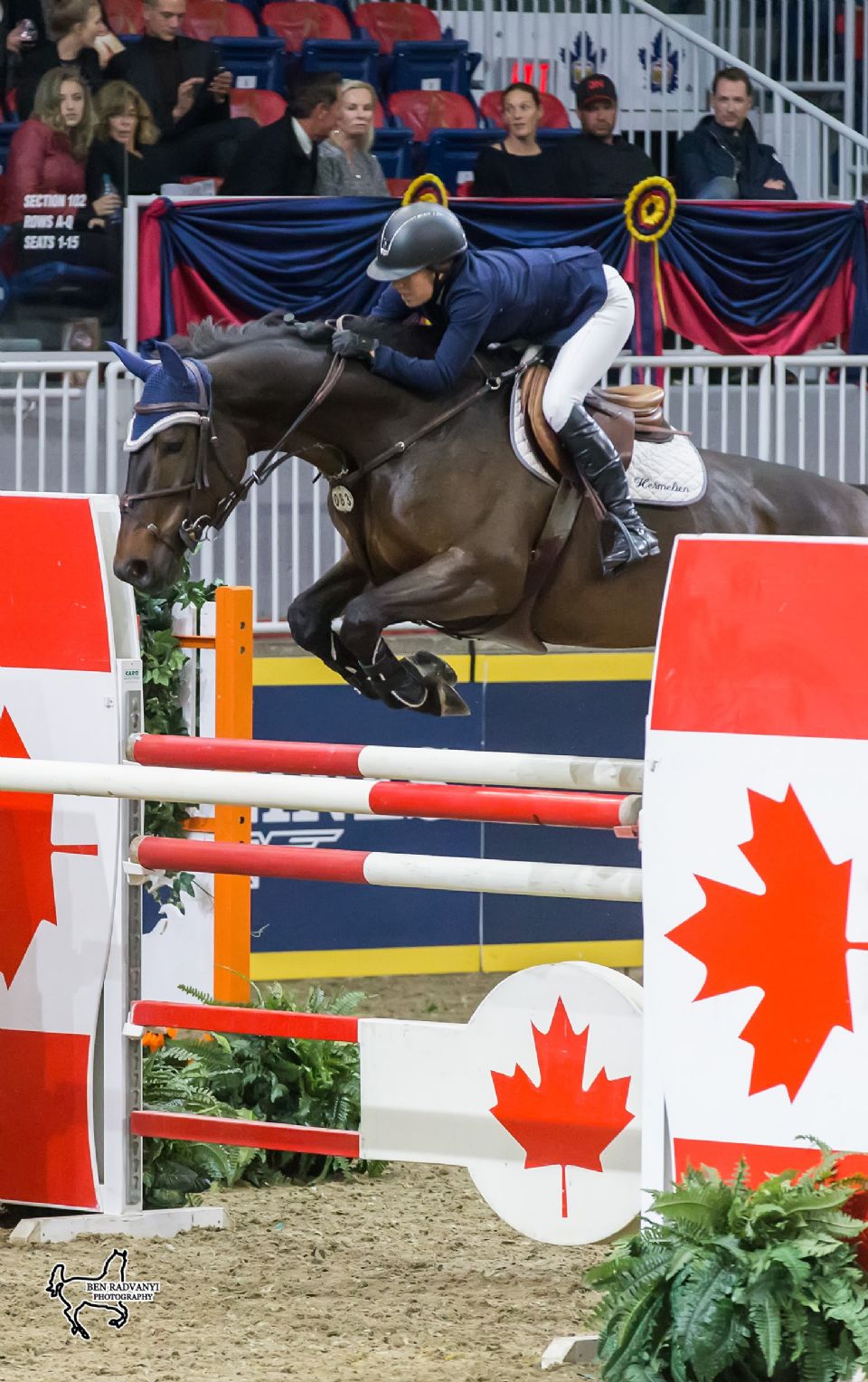 Ali Ramsay of Victoria, BC, placed second in the opening round of the $125,000 Canadian Show Jumping Championship riding Hermelien VD Hooghoeve on Friday, November 3, at the Royal Horse Show.
Photo by Ben Radvanyi Photography 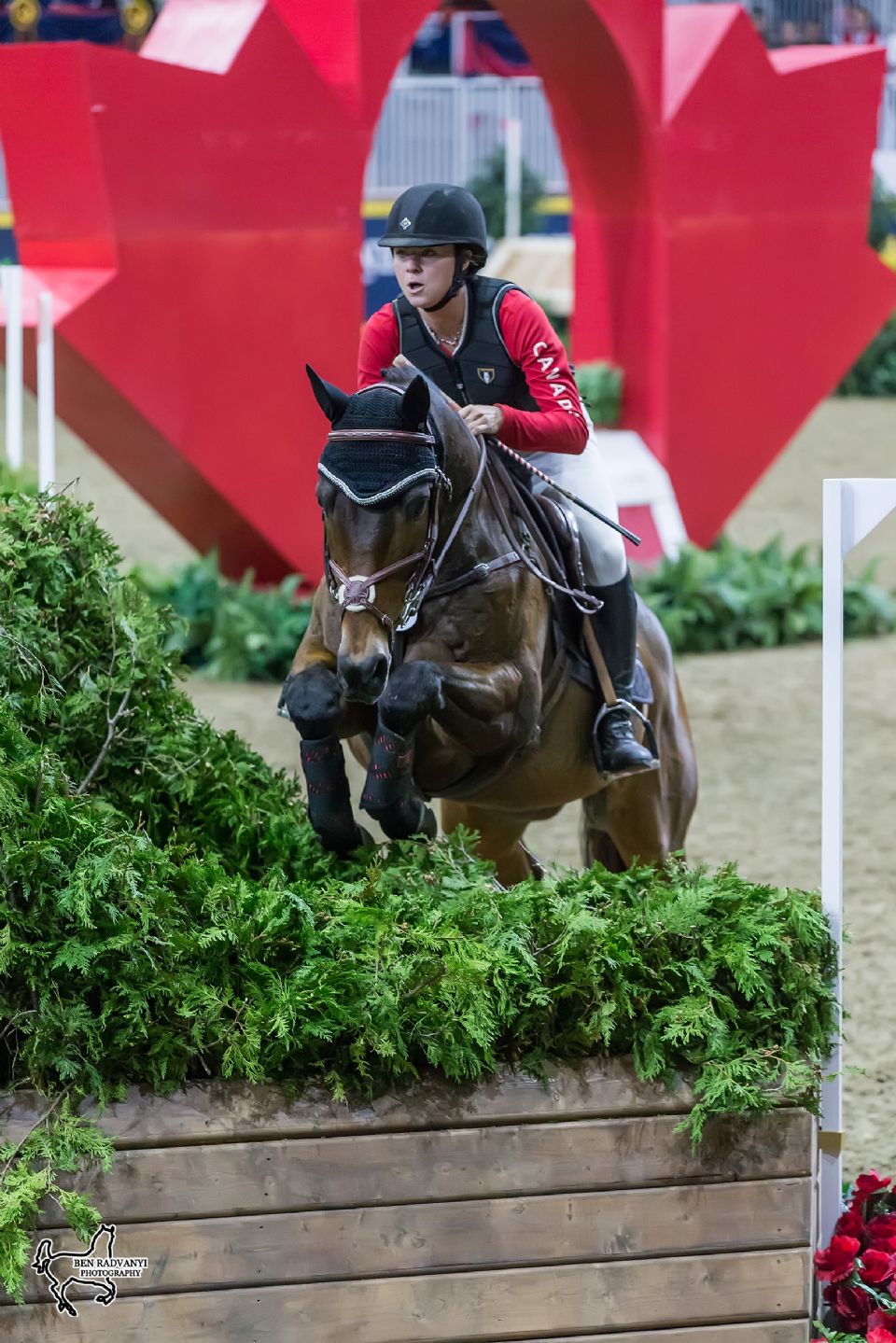 Ian Millar of Perth, ON, won the first phase of competition in the $125,000 Canadian Show Jumping Championship held Friday, November 3, on opening night of the Royal Horse Show, held as part of the 95th Royal Agricultural Winter Fair in Toronto, ON.

Speed was the name of the game and Millar was gunning for a record thirteenth national title with his mount, Dixson.  The pair left all the jumps in place and turned in the fastest time, 61.75 seconds, over a track set by 2016 Rio Olympic course designer Guilherme Jorge of Brazil.

“The Canadian Championship is a really big deal for us; it’s what this weekend is all about,” said Millar, 70, who is the defending champion with Dixson, a 14-year-old Belgian Warmblood gelding (Vigo D’arsouilles x Olisco).  “The timing is wonderful because it's year-end, so it culminates like a true championship.  Sport has to have a script to it with a start, an end, and drama. This gives you a script with the championship at the end of the season, and The Royal does a very, very good job of it.  It is very prestigious to win.”

Twenty-five-year-old Ali Ramsay of Victoria, BC, gave Millar a run for his money riding Hermelien VD Hooghoeve but was just off the pace in 62.23 seconds to finish runner-up.  Canadian Olympian Amy Millar of Perth, ON, couldn’t catch her father, settling for third with her 2016 Rio Olympic mount Heros in a time of 64.25 seconds.  Isabelle Lapierre of Levis, QC, stopped the clock in 65. 47 seconds for fourth riding Cescha M while Francois Lamontagne of St. Eustache, QC, rounded out the top five riding his own Chanel du Calvaire in a time of 67.20 seconds.

“It is a hungry group,” said Millar of the talent represented in the 2017 Canadian Show Jumping Championship. “Now it depends on what the course designer does.  If he really starts ticking it up tomorrow, it will change around, which makes it a better competition.  Where I stand now, I hope his course is simple tomorrow, but in the interest of the sport, let's jack it up and make everybody jump!”

Millar’s win was a sentimental one following the death of Dixson’s owner, Susan Grange, an immense supporter of international show jumping, last month.  Millar acknowledged Grange’s contribution, noting, “It was a terrible loss.  She owned In Style for me and now this horse, as was well as Redefin and Dryden in between.  She's done a tremendous amount for me and my career and I will miss her greatly.  She was a lovely horsewoman on top of it all.”

The $125,000 Canadian Show Jumping Championship concludes on Saturday evening, November 4.  With competitors carrying their scores over to the final phase, Millar sits at the top of the leaderboard.

The $20,000 Horseware Eventing Challenge was also featured on opening night of the Royal Horse Show.  Rachel McDonough of Toronto, ON, rode Irish Rhythm to victory in the opening phase of competition and holds the lead heading into the second and final round on Saturday evening, November 4.  McDonough, who finished second in last year's $20,000 Horseware Indoor Eventing Challenge, has her eye on the win this year, but will have to hold off other top contenders, including Friday's second-place finisher Jessica Phoenix of Cannington, ON, on Abbey GS, third-placed Brandon McMechan of Toronto, ON, riding Oscar's Wild, and U.S Olympian Boyd Martin who placed fourth on Kyra.