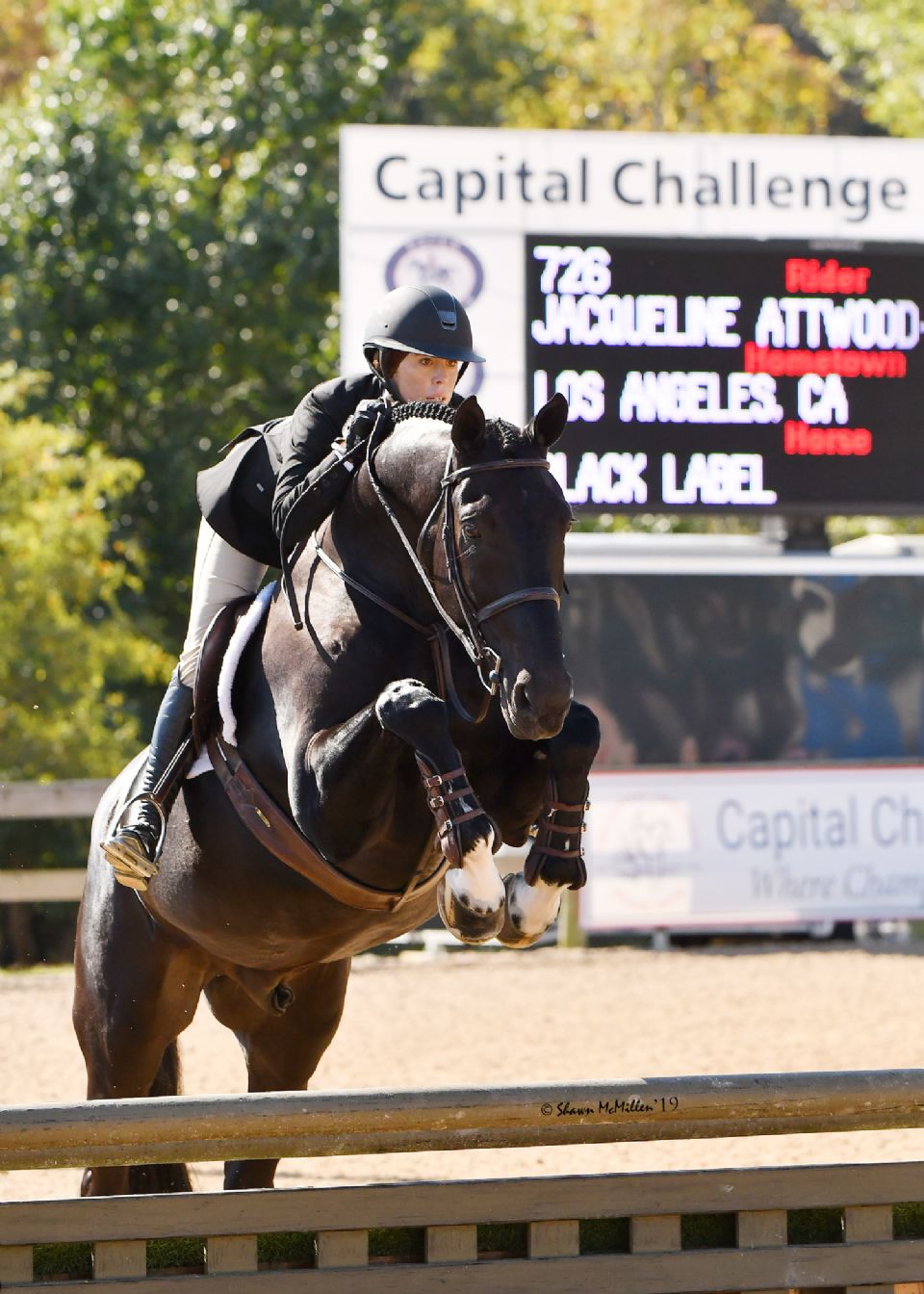 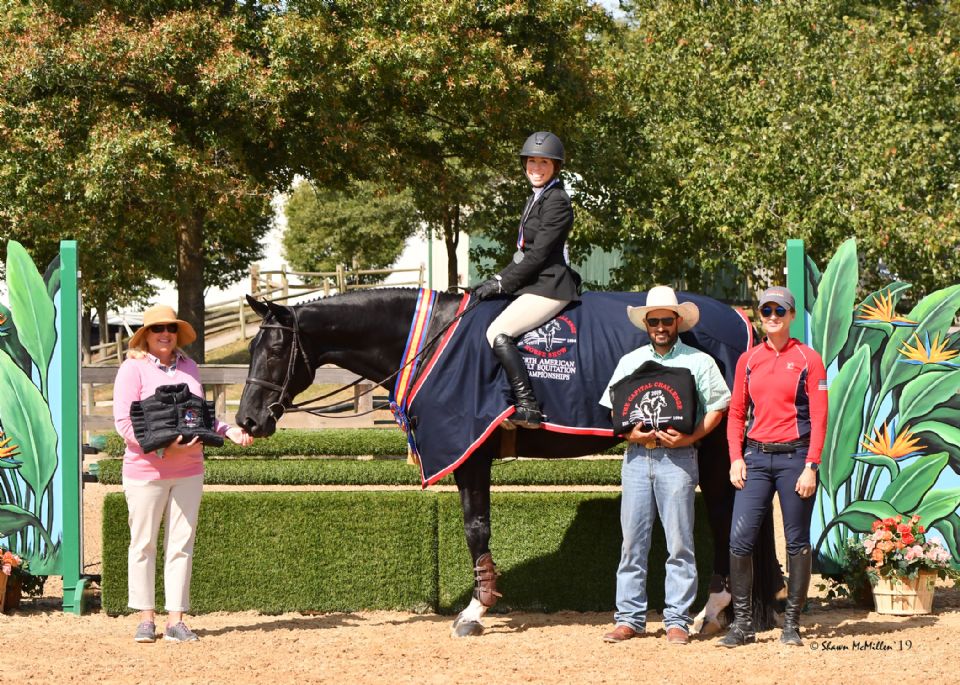 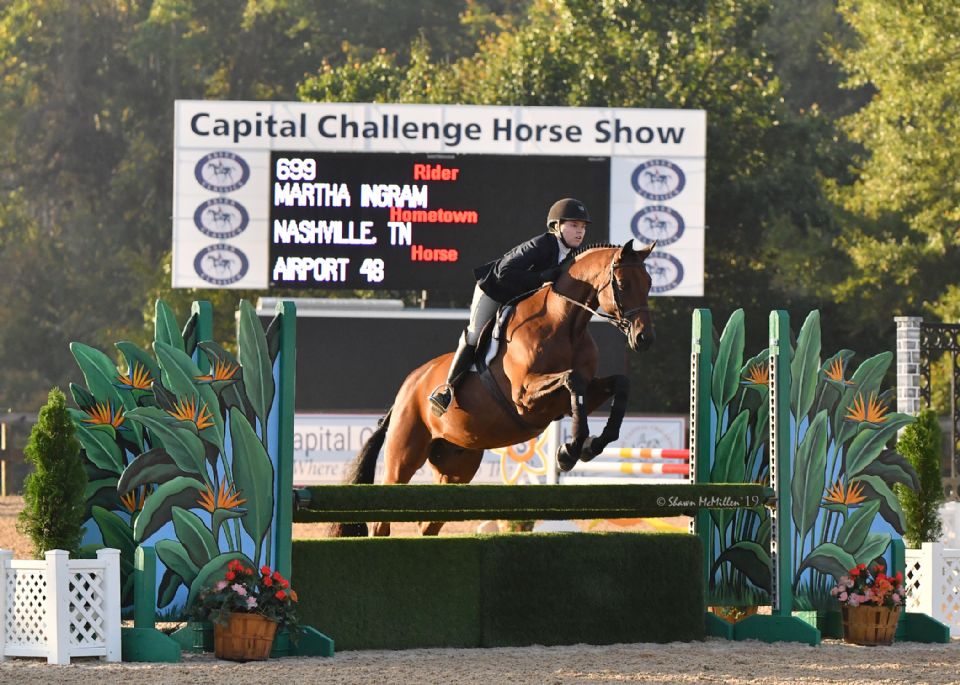 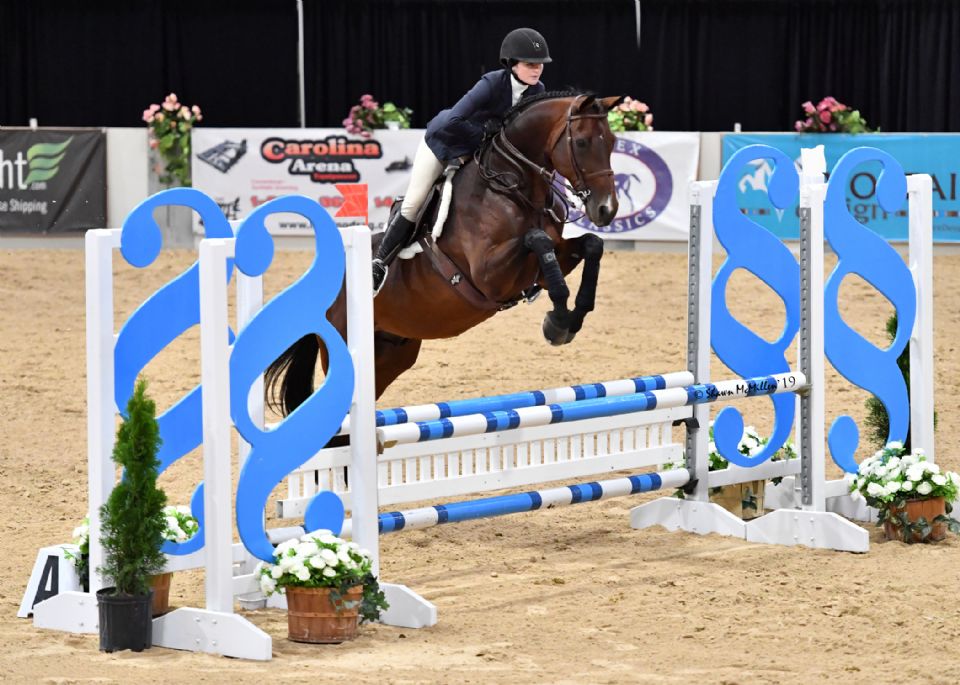 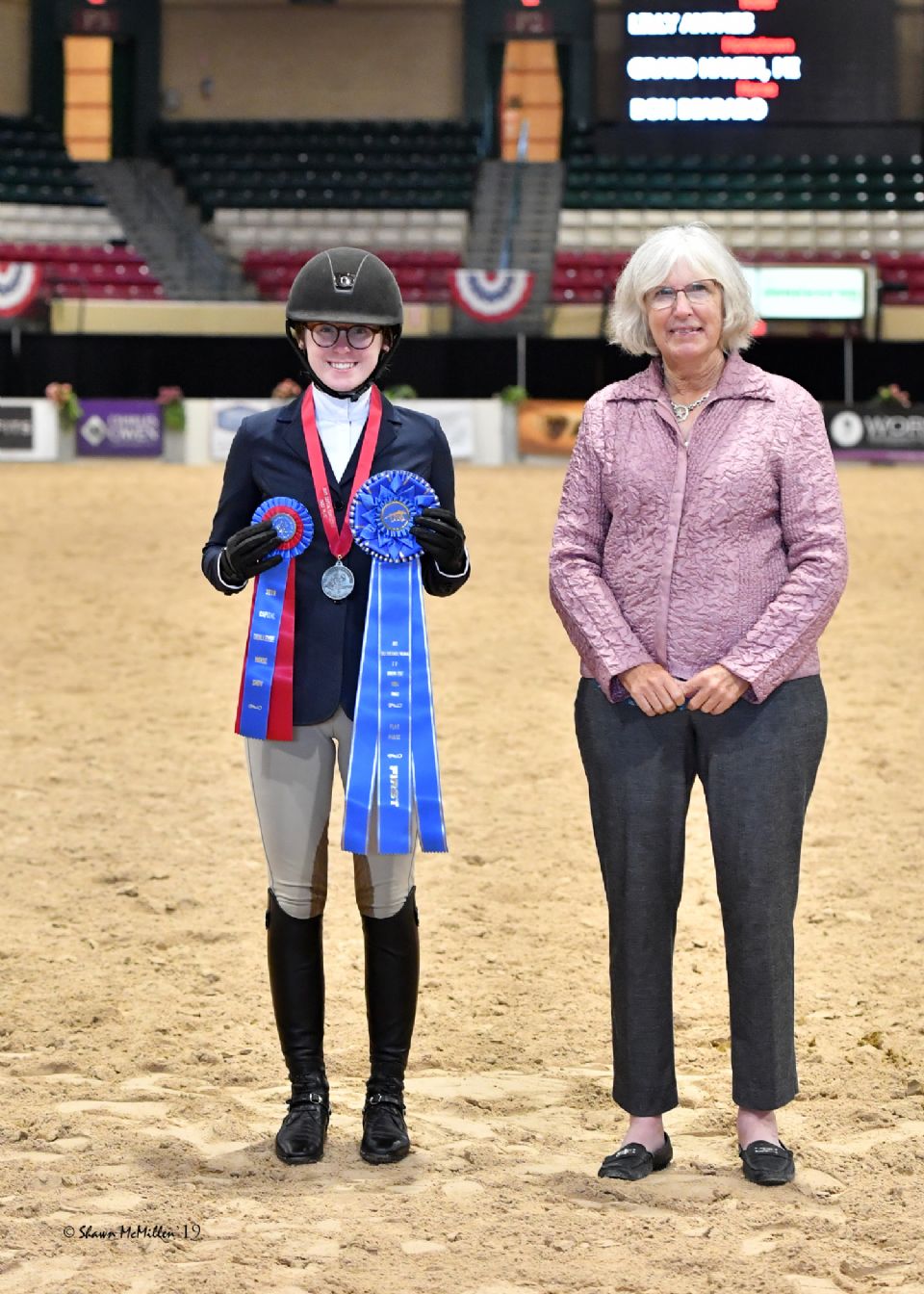 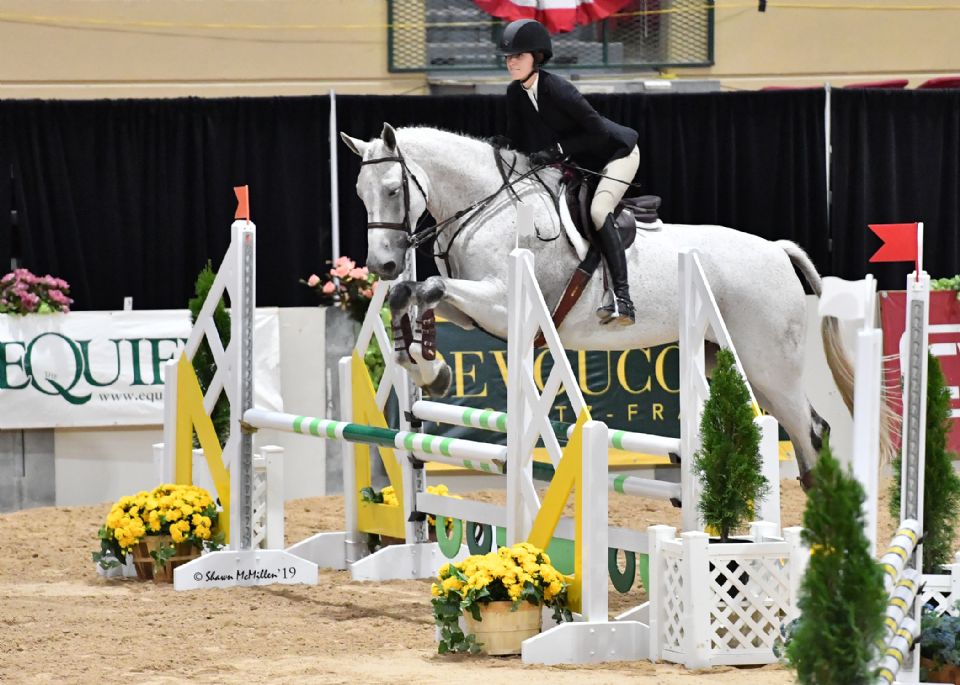 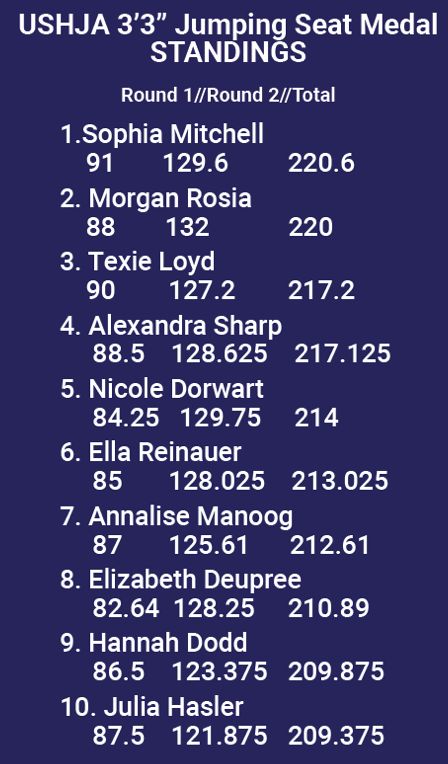 The 2019 Capital Challenge Horse Show kicked off on Friday, September 27, at the Prince George’s Equestrian Center in Upper Marlboro, MD, with the start of BIGEQ.com Equitation Weekend and a win for Jacqueline Attwood-Dupont in the North American Adult Amateur Equitation Championships.

Hailing from Los Angeles, CA, Attwood-Dupont, 32, made the cross-country trip to contest the North American Adult Amateur Equitation Championships for the third year in a row, this time besting 22 entries to clinch the victory aboard Black Label, owned by Dorothy Attwood.

“I loved every minute of it,” said Attwood-Dupont, who finished second in the class in 2018 and this year led the class from beginning to end after an initial score of 88.33 shot her to the top of the leaderboard. She then replicated her performance when the top 10 returned in reverse order of their standings for a second round, this time scoring an 88.00 to secure the win with 176.33 total score.

“My rounds went about as well as I could have hoped!” said Attwood-Dupont, who grew up in nearby Annapolis, MD, and frequently competed at the Prince George’s Equestrian Center as a junior. “I’ve grown up riding in the equitation. I don’t do it often anymore, but every year I show in the North American Adult Equitation Championship because I love equitation, and it’s a special class. Showing in the equitation at Capital Challenge is special to me because I did it for so many years as a junior. It’s wonderful to be able to continue showing in that division.”

For Attwood-Dupont – who trains with Erin Duffy, also of Los Angeles – returning to Capital Challenge also means the opportunity to reconnect with East Coast friends while showing against new competition and familiar faces – like that of second place finisher in the North American Adult Equitation Championship, Shannon Davidson.

A fellow West Coast rider, Davidson of Rancho Mission Viejo, CA, earned scores of 86 and 83.66 for a 169.66 total aboard her own Bespoke to take the reserve champion title, while third place with scores of 84.16, 81.50, and a 165.66 total went to Anna Koenig of Hollywood, FL, riding Ballendro, owned by Ashland Farms.

This year, Ingram, 22, of Nashville, TN, topped both the Adult Amateur Equitation division over fences classes and finished second on the flat before being champion in the Adult Amateur Equitation division, sponsored by Caraneen Smith. Ingram earned the title aboard Airport 48, a 16-year-old Holsteiner gelding owned by John & Stephanie Ingram, LLC.

Mitchell was one of 116 young riders from across the country to contest Friday’s phases, with the flat phase run as 10 sections prior to the start of the gymnastics phase in the Show Place Arena.

The win in the flat phase with a score of 93 went to Lilly Anthes of Grand Haven, MI, riding Don Diarado, owned by Susan Lohmann.

“Honestly, it’s crazy!” said Anthes, 16. “This is my first time showing in this kind of class. I just recently started showing in the big equitation, and I just got my horse in the spring, so I’m kind of blown away. I’ve always kind of done well on the flats, but I was not expecting to win this!”

Finishing in second in the flat was Marcus Cmola Au of Boca Raton, FL, who rode California W Z to a score of 92, while Mitchell finished in third with a score 91 aboard Callahan.

“I thought it went really well – as good as it could have gone,” said Mitchell of her flat phase. “I was super excited. That was actually my highest score ever because before that my highest score was 88, so getting a 91 was really cool.”

In the gymnastics phase, it was Morgan Rosia of Germantown, MD, who earned the win with a score of 88 aboard Clearano Z, owned by Jacqueline Fogel. Second place went to Samantha Weinerman of Chester, NJ, who earned a score of 87 riding James Bond van’t Roosakker, owned by McLain Ward.

A score of 86.50 secured third place for Nicole Dorwart of Etters, PA, and her own Olaf, while Mitchell and Callahan finished in fourth with a score of 86.40.

All gymnastics phase scores were multiplied by a coefficient of 1.5 and added to riders’ flat phase scores to produce the overall totals and current standings, with Mitchell sitting atop the leaderboard with a 220.6 total.

“It's really cool,” said Mitchell, who trains with Val Renihan at Findlay’s Ridge and just started doing the equitation this year. “I actually decided last night to [ride] Callahan, my horse, instead of another horse that we had. It was last minute. He wasn't prepped at all yesterday, so he was amazing. I did not expect him to be this perfect today. It went really well.

“I really liked the course,” continued Mitchell in speaking of the track set by course designer Ken Krome. “Those sorts of dynamic courses are my favorite – the bounces and everything – so I was really excited. Callahan is really good at that kind of stuff, so I knew if I had a good trip, he would be good too.”

Mitchell will now be the last rider to contest Saturday’s jumping round as riders return in reverse order of their standings for the final phase of the class, slated to begin at approximately 2:30 p.m. in the Show Place Arena.

Competition at the Capital Challenge Horse Show continues on Saturday beginning at 7:15 a.m. with the age group equitation divisions and culminating for the day with the USHJA 3’3” Jumping Seat Medal Final. Learn more and view the full schedule at www.CapitalChallenge.org.

Now in its 26th year, the Capital Challenge Horse Show, presented by the World Equestrian Center, sets itself apart with a distinct and unique focus on preeminent hunter and equitation competition. Held at the Prince George’s Equestrian Center in Upper Marlboro, MD, the 2019 edition of the Capital Challenge Horse Show is taking place now through October 6. The 10 days of competition include prestigious equitation events, jumper divisions, the World Championship Hunter Rider (WCHR) Finals, the $25,000 3’ and 3’3” Green Hunter North American Championships, and more, with many of the country’s best horses and riders competing in junior, amateur, and professional divisions. For more information, visit www.capitalchallenge.org.