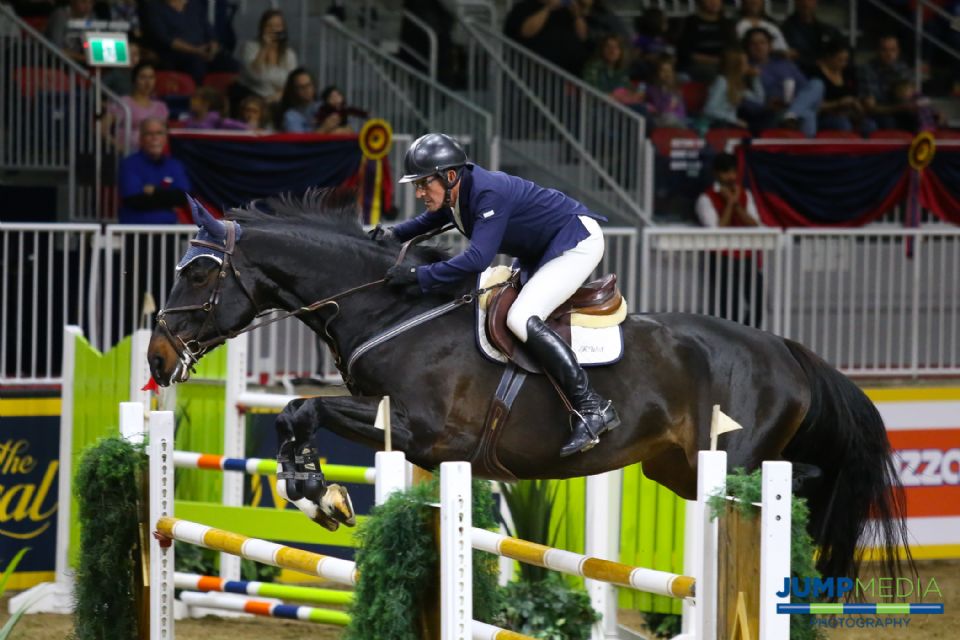 Jeff Brandmaier and Caliana on their way to the national title in the McKee-Pownall Equine Services Junior/Amateur Jumper division at the Royal Horse Show in Toronto, ON.
Photo by Jump Media 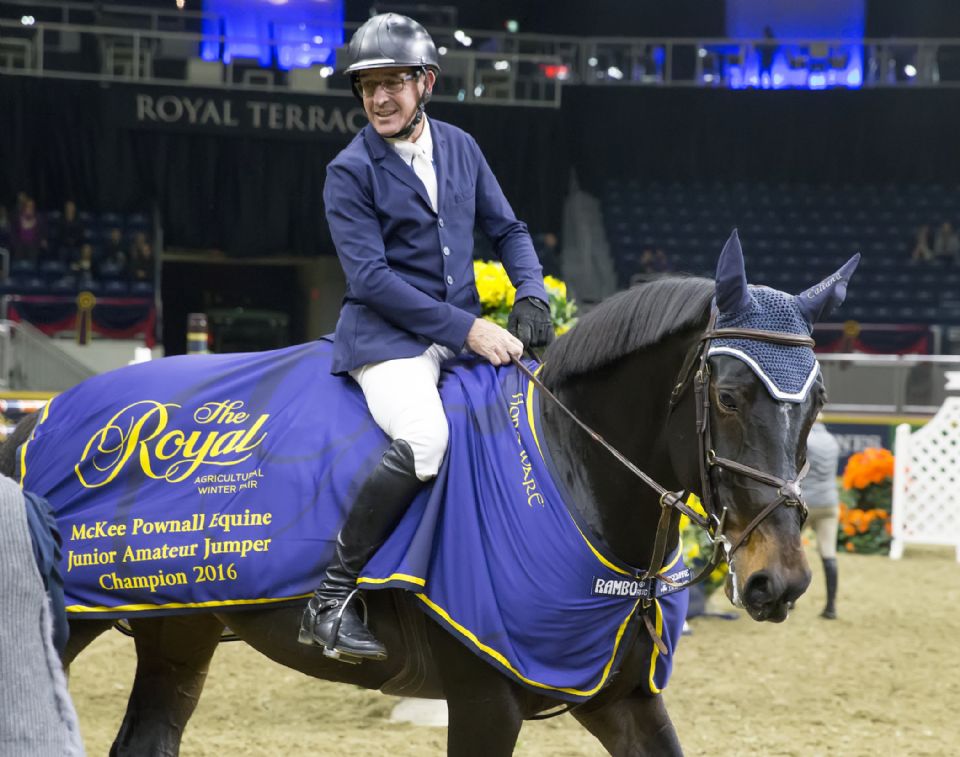 Jeff Brandmaier and Caliana were named the McKee-Pownall Equine Services Junior/Amateur Jumper Champions at the Royal Horse Show in Toronto, ON, on November 6, 2016.
Photo by Mackenzie Clark 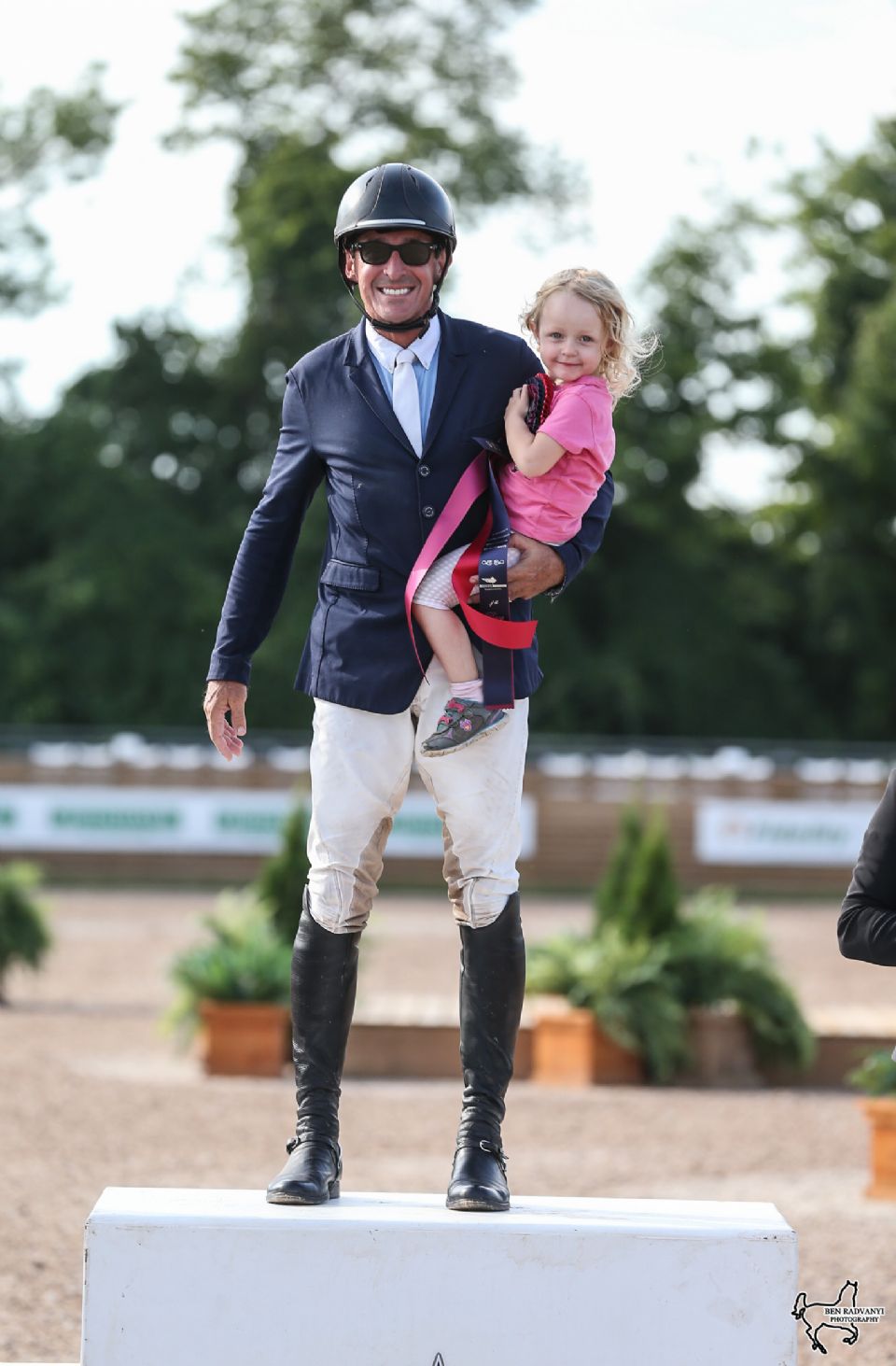 Jeff Brandmaier celebrates on the podium with his daughter, Liza Jean, after being named the Junior/Amateur 1.40m Circuit Champion and earning the $5,000 Nationwide Auto Warranty High Point Junior/Amateur Jumper Bonus at the 2016 Angelstone Tournaments in Rockwood, ON.
Photo by Ben Radvanyi Photography 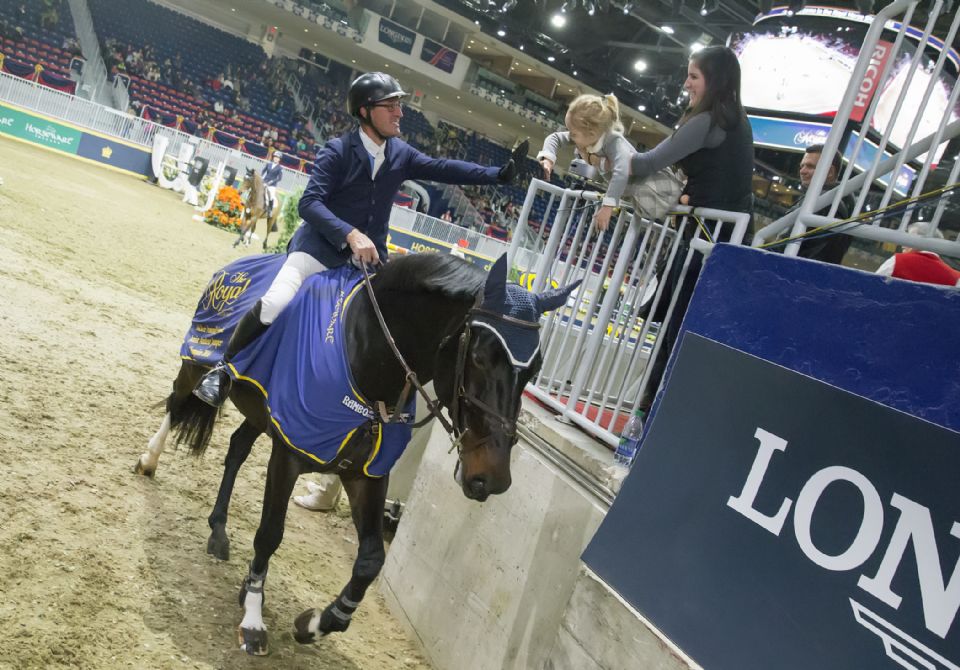 Jeff Brandmaier gets a high-five from his three-year-old daughter, Liza Jean, after claiming the Junior/Amateur Jumper Championship title at the Royal Horse Show.
Photo by Mackenzie Clark

Jeff Brandmaier and Knightwood Stable’s Caliana capped off a great year at the 94th Royal Agricultural Winter Fair in Toronto, ON by winning the McKee-Pownall Junior/Amateur Championship. Over three days of competition, the pair was the model of consistency, and was the only combination to jump clean first rounds in all three classes and earn a top placing in each.

“I am thrilled to pilot Caliana to this recognition,” said Brandmaier. “She is so deserving. We call her the ‘Warrior Princess’ because she is always game and fights for the clear round. We know each other so well, she is a great horse, and we had an amazing year!”

The honour was a storybook ending to an exciting year for Brandmaier, 57, who recently returned to the show ring following major surgery in his battle with cancer. The pair’s 2016 season included winning four High Junior/Amateur Classics, the Ontario Hunter Jumper Association (OHJA) High Junior/Amateur Jumper Championship, The Angelstone Tournaments Junior/Amateur 1.40m Circuit Championship and earning the $5,000 Nationwide Auto Warranty High Point Junior/Amateur Jumper Bonus at Angelstone Tournaments in Rockwood, ON. Brandmaier and Caliana also made their grand prix debut in the $50,000 Brookstreet Hotel Grand Prix in July at the Ottawa National Horse Show.

Ending an incredible year marked by top honours at The Royal was a special experience for Brandmaier, especially with his wife and fellow competitor, Margaret ‘Muffie’ Guthrie, and their three-year-old daughter, Liza Jean, with him every step of the way. In addition to competing at the Royal Horse Show, Muffie and Jeff, along with Braeburn Farms, present the Canadian Hunter Derby National Championships at The Royal, which culminates with the $25,000 Knightwood Hunter Derby.

“The Royal Agricultural Winter Fair is a magical place that has been dear to our family for generations, and this is a team win for Knightwood,” said Brandmaier. “My trainer Erynn Ballard is incredible. She worked with us to develop the winning plan for the year and that reflected in Caliana’s readiness for the Royal; she was fresh, focused, and happy to do her job. Erynn inspires so much confidence with her approach to the sport and made the Royal and the entire year easy and so much fun!

“Our barn manager, Lesley Leeman, is integral to our success and is a true professional,” continued Brandmaier. “She keeps everything organized and Caliana is always prepared flawlessly; shiny, fit, relaxed, and ready. It is a great feeling when everything comes together.”

Brandmaier was also quick to express gratitude to McKee-Pownall Equine Services veterinarian Meghan Waller, DVM, and her dedication to Caliana, and for their sponsorship of the Junior/Amateur division at the Royal.

“They raised the profile of this division, and we all appreciate that,” concluded Brandmaier.