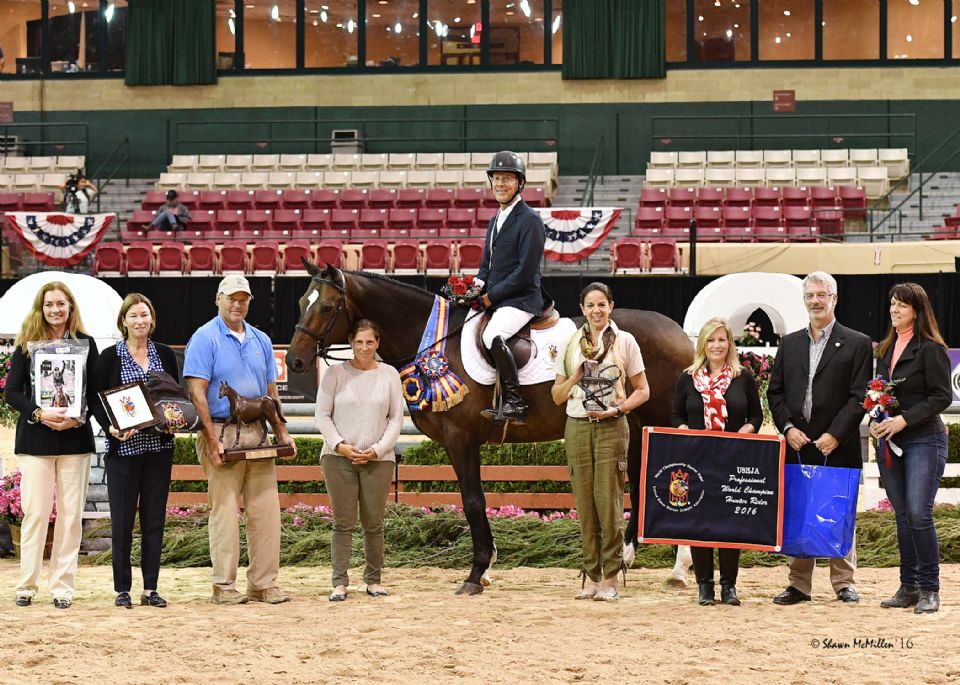 John French accepts the award for the win in the $5,000 WCHR Professional Finals aboard Small Gesture.
Photo by Shawn McMillen Photography 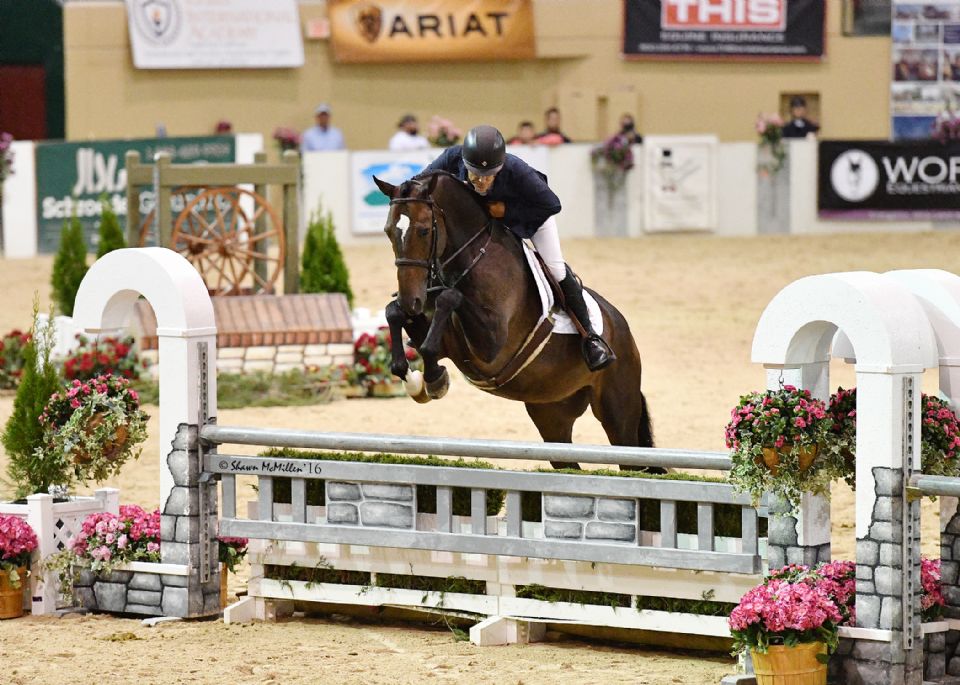 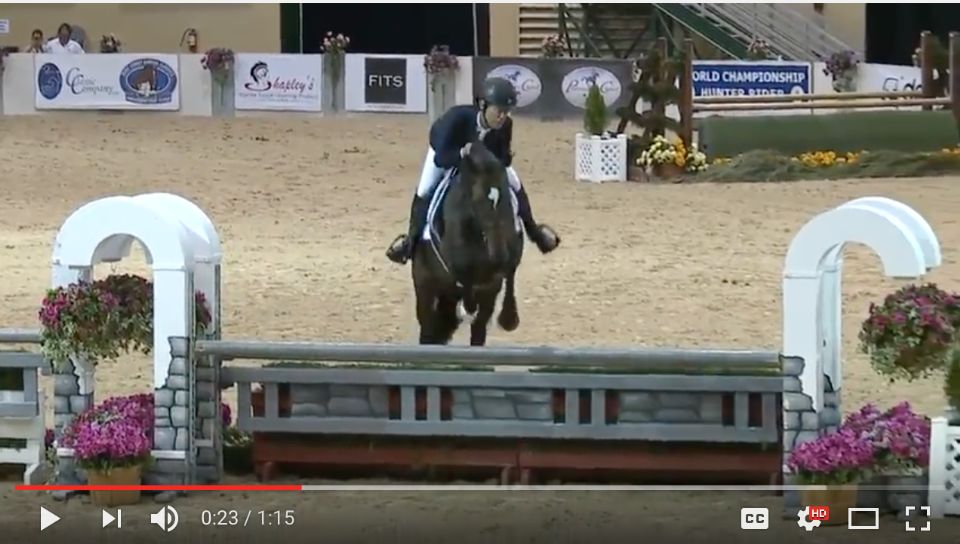 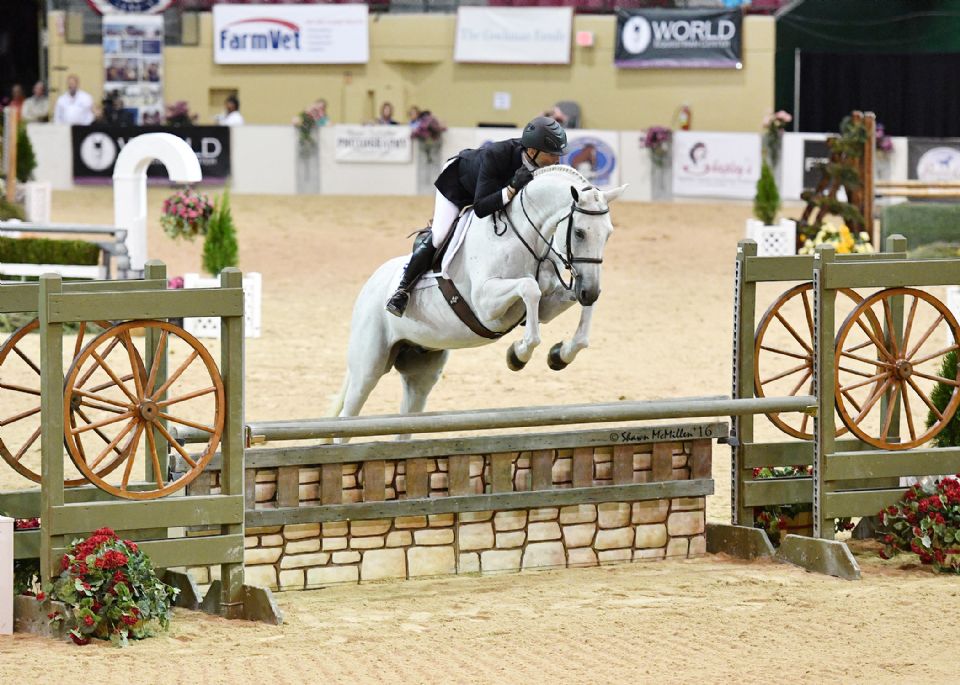 Scott Stewart, pictured on his first round mount Show Me, finished second in the WCHR Professional Finals.
Photo by Shawn McMillen Photography 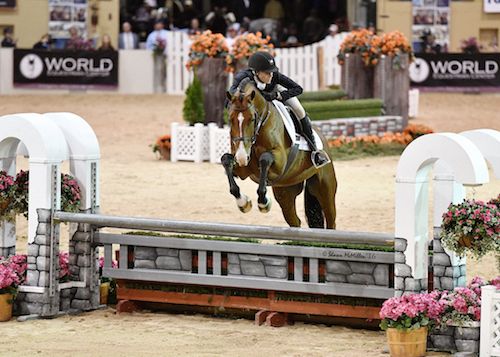 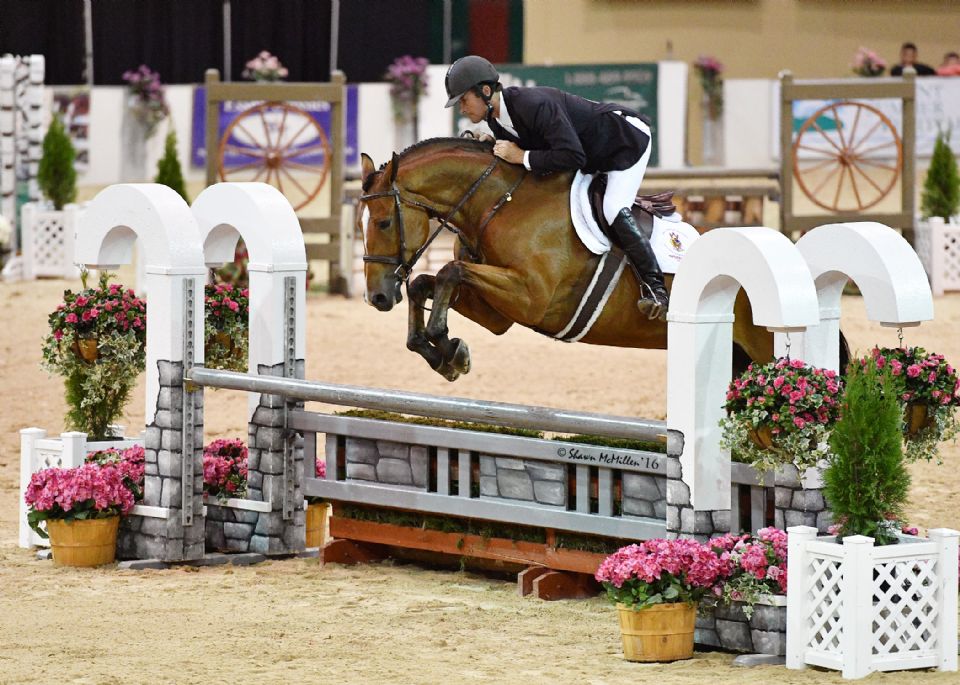 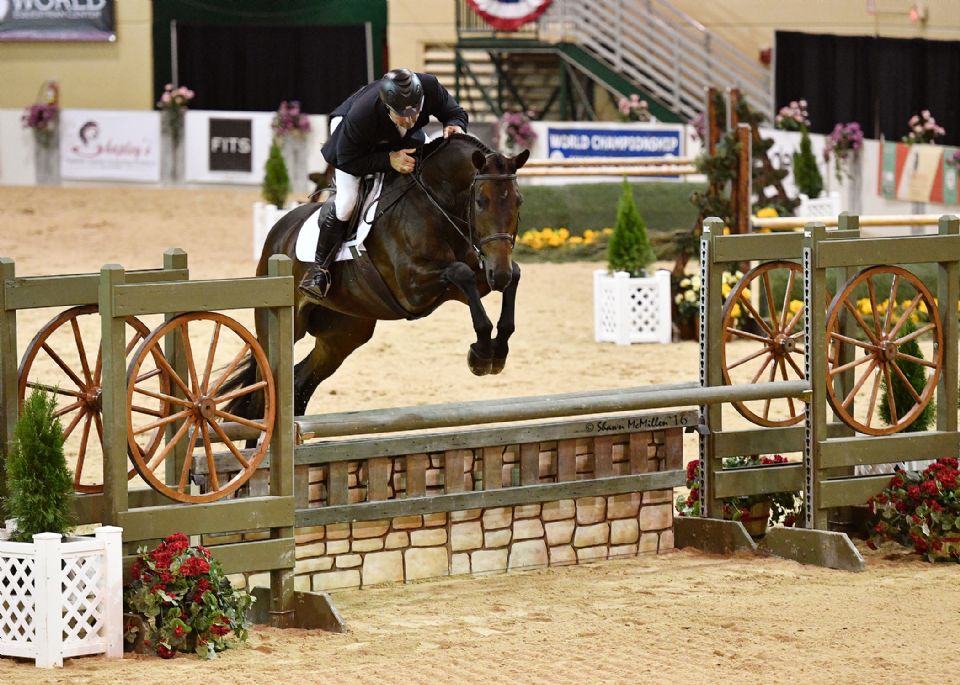 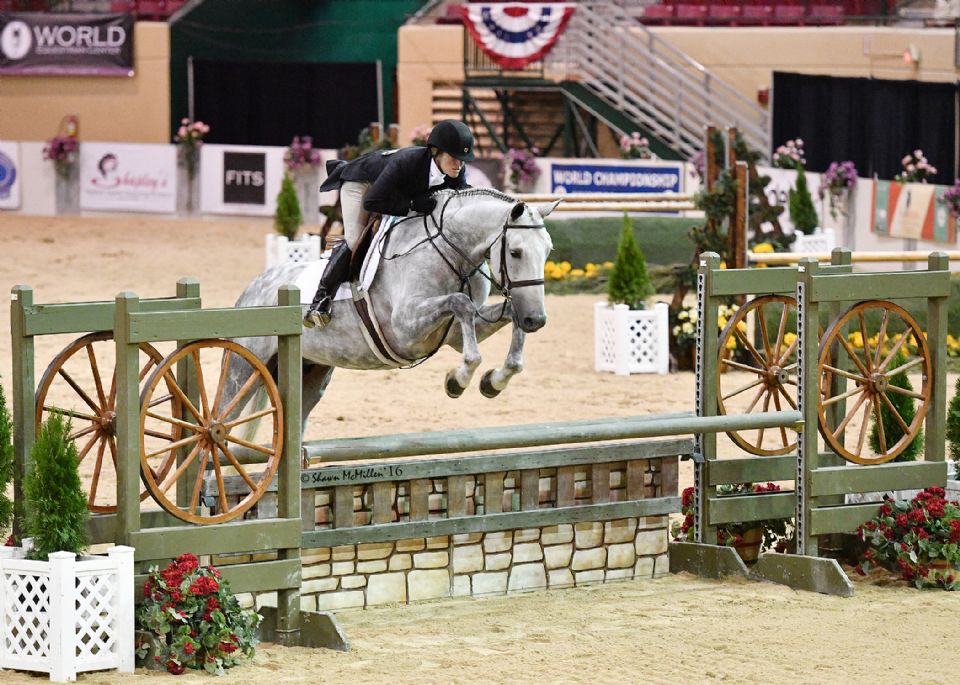 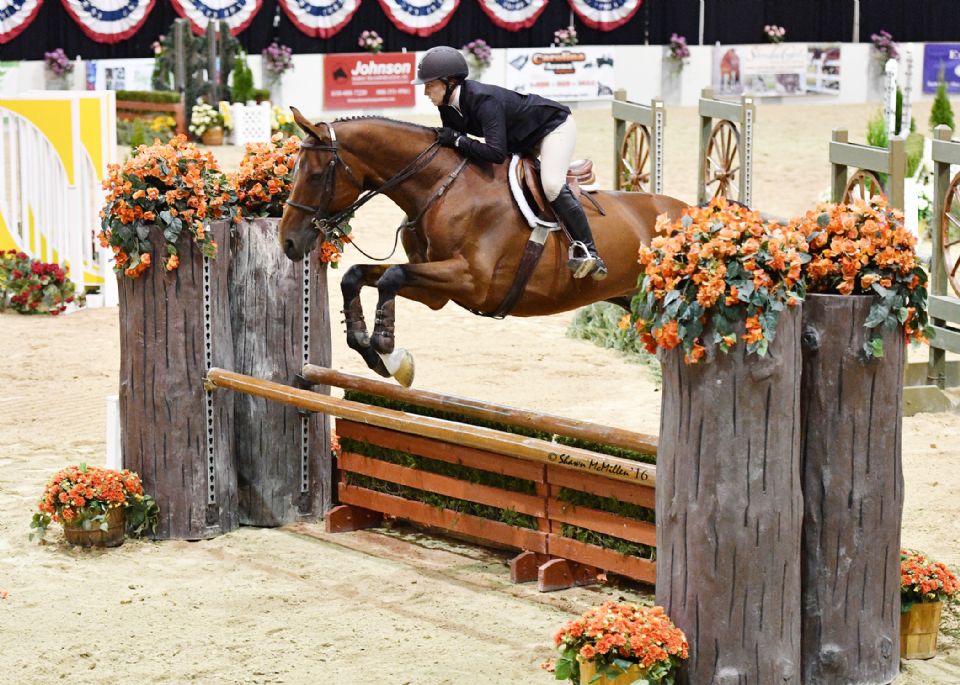 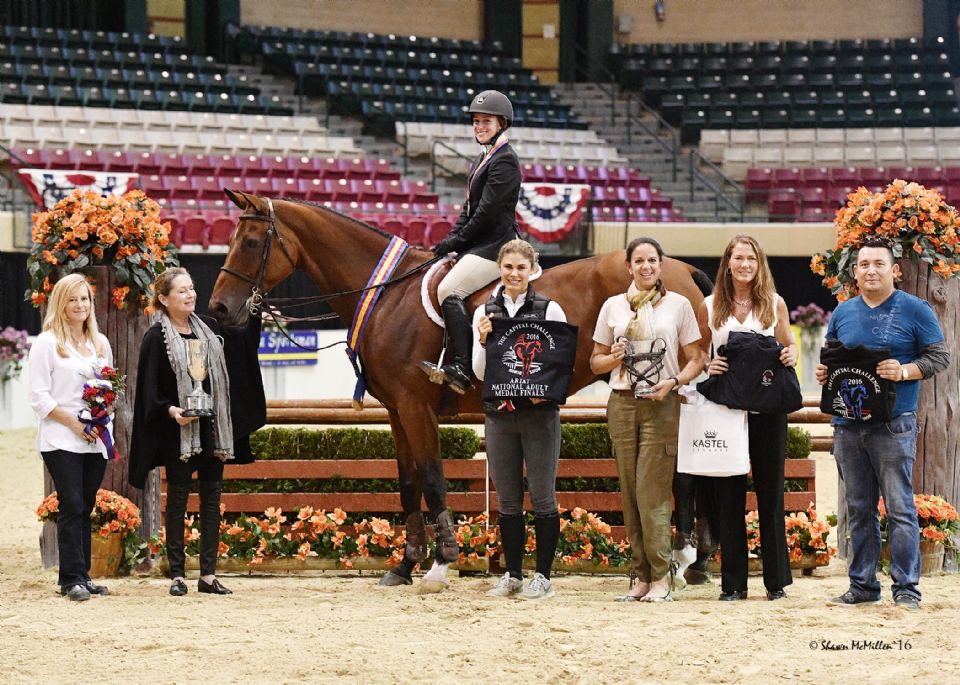 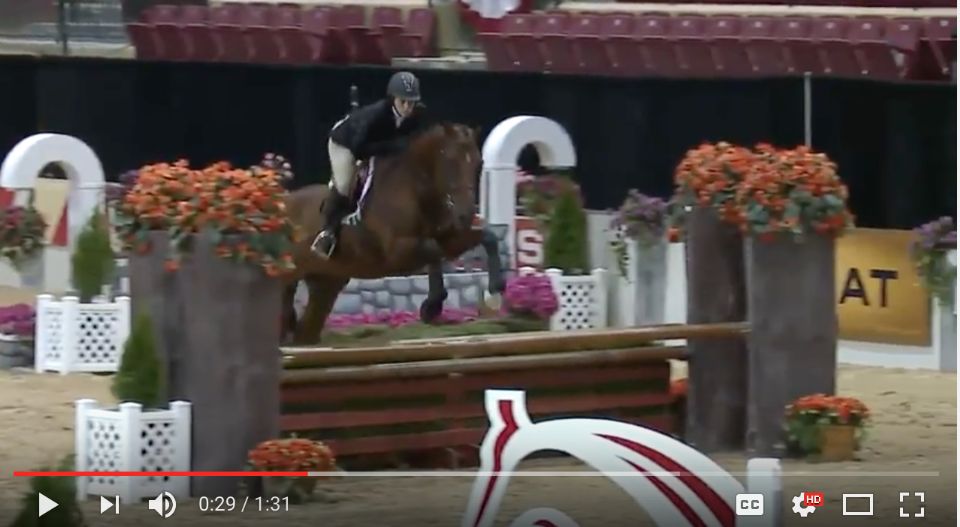 The Capital Challenge Horse Show, held at the Prince George's Equestrian Center in Upper Marlboro, MD, runs through Sunday, October 9. Every class of the show is live streamed and available to watch online at tv.coth.com or www.capitalchallenge.org.

The WCHR Pro Finals used the same three-round format as last year. Riders switched on two donated horses for the first two rounds, then brought a horse of their own for the third and final handy round.

French set the tone for the night and started with an unbeatable lead by riding Alant, an eight-year-old gelding owned by Elli Yeager, to a score of 90.66 (90, 93, 89). In the second round, he piloted Everglow, an eight-year-old Holsteiner gelding by Quidam de Revel owned by Whish, LLC. French jumped ahead again with judges’ scores of 91, 89, and 92 for an average of 90.66.

In the final handy round, French rode Small Gesture, a seven-year-old Holsteiner gelding by Catoki owned by Chris Iwasaki and Elizabeth Reilly. Yet again he had the best score, this time a 90, for a three round total of 271.32 and the win.

French had a dominating nine-point lead over second place finisher, Scott Stewart, to take his fourth WCHR Professional Finals win in the 23-year history of the class.

French is comfortable with the format of the WCHR Pro Finals, in that he often hops on horses for the first time at a horse show. Catch-riding two horses tonight was nothing new. What was new, however, was his mindset.

“I actually this year just tried to not think so much,” he said with a smile. “That was my new thing, just to go in there and don’t even think. That’s something that I read in sports books about how people like golfers get ready or get in the zone. I always read ones that say you just don’t think when you get nervous or for a big competition like this. I just tried that, and it worked pretty good.”

Stewart was unsure of how his horses would go, but was pleasantly surprised at the results.

He described, “I had a couple of rubs in the first round, but he was really fun to ride. He was really easy. The bay mare I got to see her go first. I wasn’t quite sure how I’d ride her because she seemed a little sensitive. She was nice, but she actually was probably the hardest ride for me. You couldn’t use your leg too much. You had to just let her be. In the end, she went around quite nice. Reality I’ve had forever, so I know him really well. He’s fun. He did a good job.”

Gardner admitted she was too quick to the single oxer on her second ride, Show Me, and Redeemed had more of “an equitation feel”, which suited her just fine.

“It was really my comfort zone. I love the equitation, and I wish I could do it all over again. So it was really neat that way,” she said.

“Just to get to do it was such a thrill,” Gardner said. “Honestly being a little bit of an underdog was, I think, an awesome thing for me. My first time in there - just go in there and do the best I could. It was just a blast. I’m really honored.”

Tosh remarked about the camaraderie that the riders have with each other when preparing for the WCHR Pro Finals. “We’re usually talking (and) comparing notes,” he said. “You always try to help each other out. It’s a fun class. It’s special to be in it every year. It’s a very special class, and just to be in this group of riders is always fun.”

“Unlike John, I don’t ride that many different horses,” Bragg revealed. “I sort of produce my own and show them. I’m sort of spoiled that way. So it for sure was a challenge for me to just sort of get on and go for it, if you will. It was fun and challenging. It makes you a better rider, to go out there and feel the pressure to perform.”

“It was a great class as usual,” Farmer said. “Thank you to everyone who loaned us those horses. That was very generous of them.”

She added with a smile, “I screwed up tonight, but that was on me, nothing else. I was excited to be here and be in this group.”

For his win tonight in the WCHR Professional Finals, French was presented with the “All the Way” Perpetual Trophy, donated by Elizabeth Busch Burke and Lysa Burke Horkan. The Far West Farms Perpetual Trophy donated by the Karazissis Family was given to Alant, owned by Elli Yeager, given to the donated horse with the highest cumulative points of the WCHR Professional Finals.

All of the riders thanked the owners for letting them use their horses in the WCHR Professional Finals. The horses in tonight’s class were:

Show Me, owned by Ashley Hartman

Since its inception in 1994, the ARIAT National Adult Medal has given adult riders the opportunity to compete in a competitive equitation class over fences 3' in height. The classes are held at select shows across the country and riders collect points to qualify for the Finals.

One of those riders is 23-year-old Allison Fithian of Monterey, CA. She and Lucky d’Etenclin, a 17-year-old Selle Francais gelding by Narcos II, completed two fantastic rounds to win. In the first round, they scored an 88.33 and led the class of 30 entries.

The top 10 from the first round returned for the second round over a course designed by Ken Krome. Fithian rode to an average score of 88.66 for her second round and a total of 176.99 for victory.

Fithian has owned “Lucky” for nine years, and he was her equitation horse when she competed in the big equitation as a junior rider. They placed third in the USEF Medal Finals together, but a small injury kept Lucky out of the rest of the finals for Fithian’s final junior year. Fithian went to college at New York University, and Lucky was leased out to several top junior riders at Beacon Hill, such as Lucy Deslauriers, Victoria Press, Gabriella Bausano, and Megan MacPherson.

“I finally got him back this year and got to ride him again,” Fithian said. “I’m just really happy to have been nearly as successful on him. He’s a really special horse, and I just get along with him really well. It kind of felt like unfinished business on him, like I could have done a little bit more. I was a little sad at the end of my junior year when I knew I wasn’t going to be able to ride him again and (I wanted to) see if I could do something more on him.”

Fithian got the ride back on Lucky in May, and they competed at three horse shows before Capital Challenge. The Ariat National Adult Medal Finals were always a goal. “We were like, ‘If we’re going to do the equitation on him, we’ll go win Ariat Finals.’ That’s what we’re going to go do,” she confirmed.

Preparing at Beacon Hill with the junior riders for their finals helped, Fithian said. “I felt super prepared because back at the barn all of the juniors are getting ready for indoors, and I get to practice on all of those courses and occasionally get to have lessons with them which is always very enlightening and makes me work a little bit harder. I definitely felt very prepared especially with the win last Sunday,” she recalled.

Fithian was referring to her victory in the North American Adult Amateur Equitation Championships during Equitation Weekend at Capital Challenge. Winning another final in one week was made extra special when her family was here from California to watch her.

While Fithian didn’t ride Lucky for four years, giving him up is something that she says will never happen.

“He is very special. I’m never going to sell him ever; he’s too special,” she said. “When I bought him, we really made him into what he is. He was just some horse that someone imported from Europe. I did his first equitation class on him, and he’s my baby. I’ll never sell him. He’s not going anywhere.”

Fithian felt like her victory today was a redemption of sorts. “It feels really, really good. I want to cry. I just have the best horse and a great team behind me. It feels really good to do this well as an adult still. I feel really proud of myself that I’m still able to compete at that level. It’s kind of verification for my riding abilities. It means a lot. I’m so happy that he’s feeling so great still and is doing so well.”

The winner of the $2,500 WCHR Adult Amateur Challenge, sponsored by Kate Considine & Willow Brook Farm, was Mahalo, ridden by Katie Robinson with a score of 86. Lindsey Evans-Thomas and Valencia placed second, while Dawn Fogel riding Spotlight was third.

Round 1 of the North American Junior/Amateur-Owner Jumper Challenge Cup kicked off this afternoon with a $5,000 speed class. Lacey Gilbertson and Bijzonder came away with the win with a clear round in a time of 59.740 seconds. Second place went to Sandra Zimmerli and Zaza, who posted a time of 63.111 seconds. Callie Seaman and Dakota were third in 65.060 seconds.

CORRECTION: Missy Luczak-Smith and Executive won the 3’3” WCHR Amateur-Owner Challenge, held Thursday, Oct. 6. Lindsay Maxwell, who was announced as the winner following the class, was determined to be ineligible due to cross entering in the 3’6” Amateur-Owners.