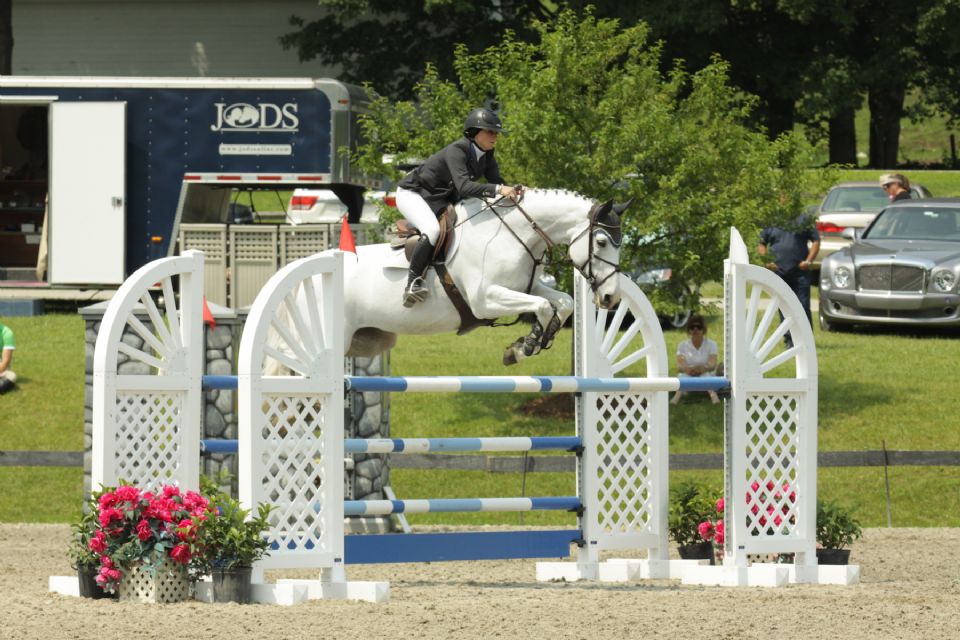 Tyler and Seattle 6, her 14-year-old Holsteiner mare (Cassini x Condrieu) were first combination to successfully master the track set by course designer Alan Wade of Ireland. Kc Van Aarem of Wheaton, MD, and her own Mastermind soon followed suit to guarantee a jump-off.

Returning first, Tyler and Seattle 6 gave everything they had for the win. Rounding the corner to the final line at a blistering pace, Tyler planned for the leave-out, but changed her mind after jumping into the line.

“Once I got in, I saw another step, so I pulled and she chipped,” said Tyler. “She saved me and we jumped it, but had the rail down. She is very fast, and never one that I have to worry about the time allowed with.”

Speed proved to be Tyler's saving grace as she crossed the timers in 32.32 seconds. The door was open for Van Aarem to take the win with a clear round, but when she pulled a rail near the end of the track for four faults, her time of 37.23 seconds left her in second place.

“It was a great class,” said Tyler, 22, who is entering her senior year at St. Lawrence University in Canton, NY, where she studies Economics. “The course was challenging enough, but still gave us a jump-off, the height was great, and there were some technical lines that you really had to ride. There was great competition today.”

Tyler, who trains with Sachine Belle, has had the ride on Seattle 6 for more than six years and is currently focused on earning enough points to qualify for the Washington International Horse Show this fall.

”When I first got her, we did the lows and have since moved up to the highs, but this summer she has been great,” said Tyler of the mare she affectionately calls ‘Princess’ around the barn. “She's an unbelievable horse and definitely lives up to her barn name; she is the most spoiled horse in the barn.”

Tyler will be training with Belle for the duration of the Vermont Summer Festival, noting, “Hopefully we keep moving in the same direction as today!”

Lea Marie Trudel of Granby, QC, and Evelyne Racine's Merlot won the $1,500 Marshall & Sterling Children's Jumper Classic under the direction of Canadian trainer Paul Bélanger. Bélanger, who operates Écuries Bélanger Stables in Bromont, QC, was awarded the Horse Sport Canadian Sportsmanship Award during the first week of the Vermont Summer Festival. The new award, sponsored by Horse Publications Group, will be presented each week during the circuit, with the winners collecting several prizes, including a subscription to Horse Sport Magazine.