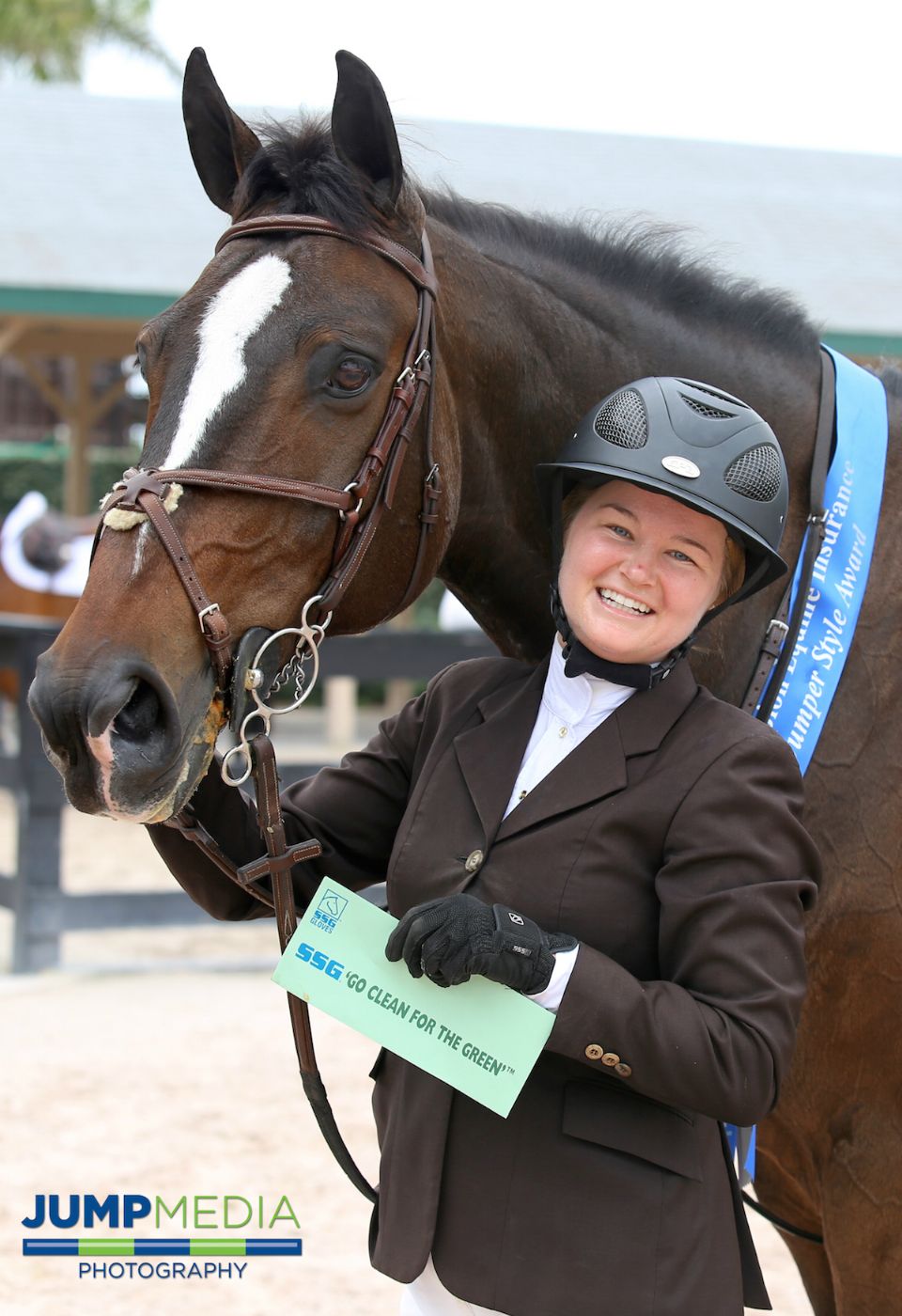 Kelsey Thatcher displays her SSG Gloves “Go Clean for the Green” bonus following her win aboard Everything in the $15,000 Maybach – Icons of Luxury High Amateur-Owner Jumper Classic.
Photo by Jump Media 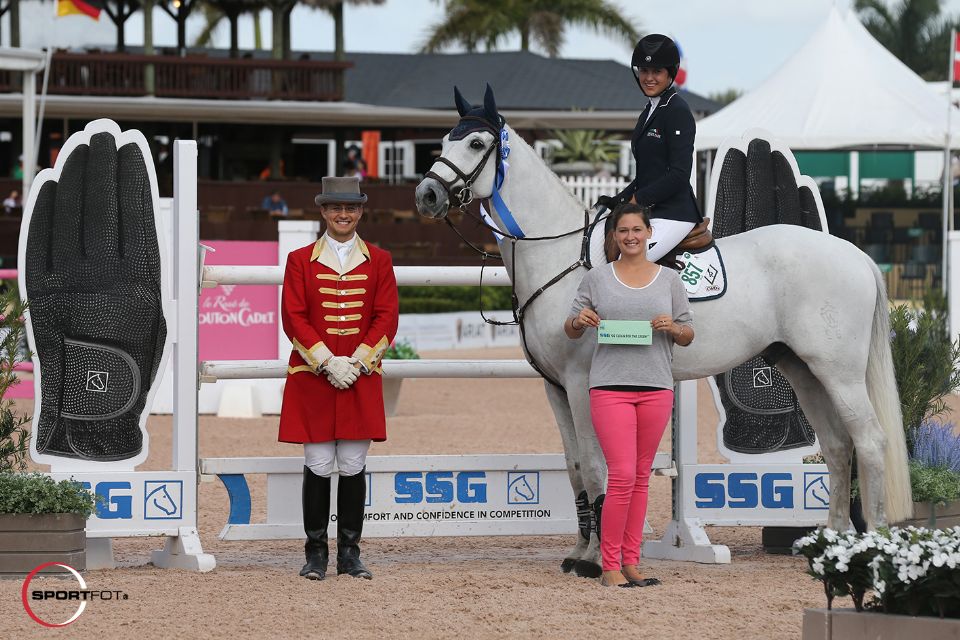 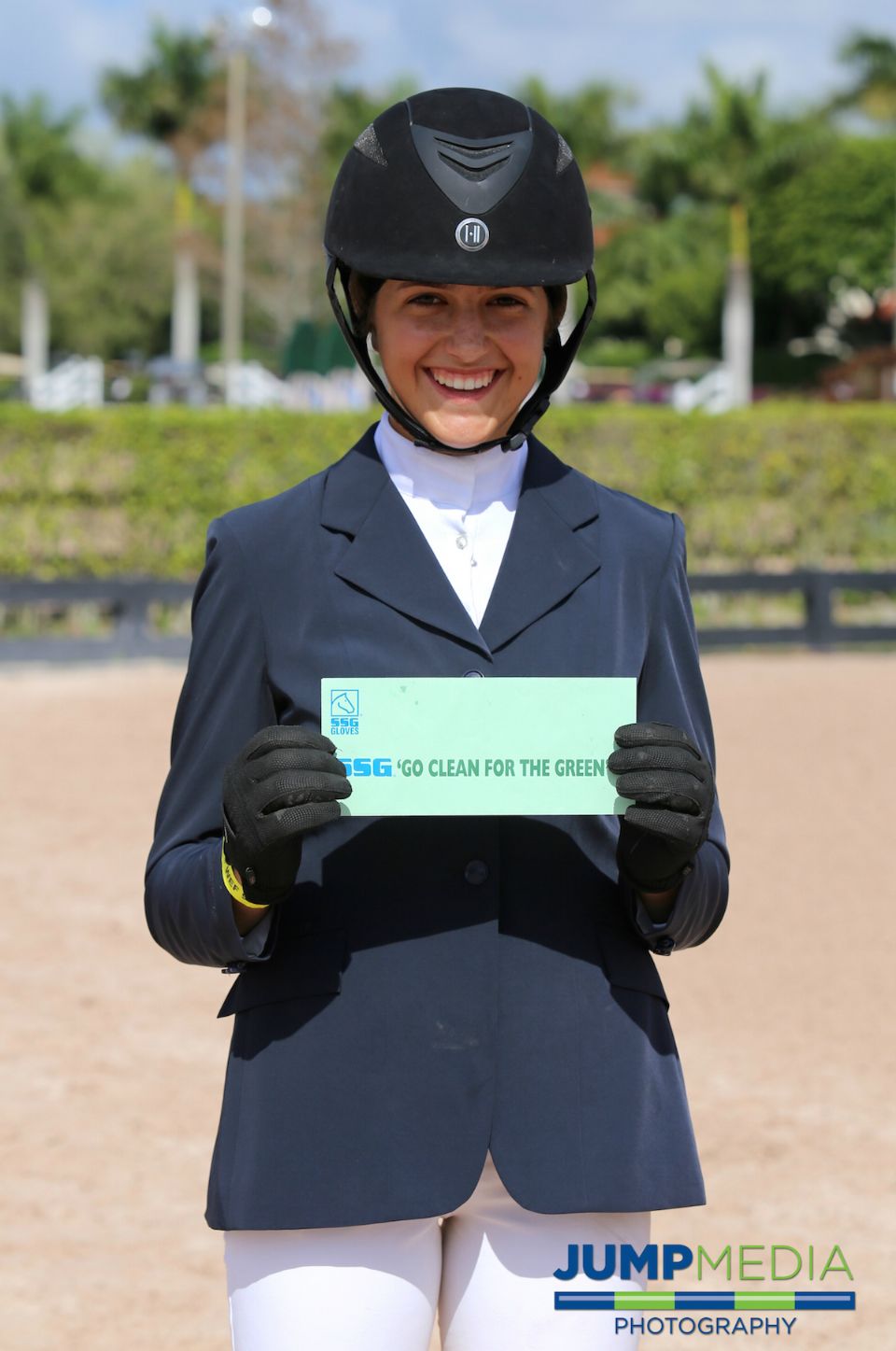 Kelsey Thatcher, 23, and Mckayla Langmeier, 15, each earned a $1,000 bonus in the SSG Gloves ‘Go Clean for the Green’ promotion during Week 9 of the Winter Equestrian Festival (WEF) in Wellington, FL.

A total of 58 entries contested the $15,000 High Amateur-Owner Classic over tracks set by Irish course designer Alan Wade. Thatcher, who hails from Wellington, FL, and Everything, owned by Pony Lane Farm, were one of five pairs to return for a jump-off and posted the fastest of three double-clear efforts in a time of 34.41 seconds.

Thatcher has had the ride on Everything, a 12-year-old Belgian Warmblood gelding owned by Pony Lane Farm, for four years under the direction of trainer Maggie Jayne and is a repeat winner in the SSG Gloves promotion.

“I won the bonus last year and it's a wonderful cherry on top of the cake,” she said. “I like the gloves because they are not too warm and their grip lasts for a long time.”

According to Thatcher, Everything has returned to top form following a blood clot in his foot, thanks to the diligent work of Jayne.

“He had the whole summer off and is back to his winning self,” said Thatcher. “He is perfect and knows his job.”

In the High Junior Jumper Classic, Langmeier and Charlie, owned by Charlie Group, bested a starting field of 32 entries. Wade's difficult track produced ten four-faults efforts at the end of the first round, requiring a jump-off to determine the winner. Langmeier produced the fastest of five clears in the jump-off, stopping the clock in a time of 35.96 seconds for the win.

A familiar contender in the High Junior Jumper division, Langmeier earned her first-ever bonus in the SSG Gloves promotion.

“The bonus is great,” she said. “I love that even when these gloves are brand new, they already feel broken in. I use them on my jumpers, hunters, and equitation horses.

“I'll probably go buy myself another pair of gloves with the bonus money,” continued Langmeier of Granby, CT.  “And maybe a dirt bike!”

Langmeier and Charlie, a 13-year-old Westphalian gelding, were partnered during WEF Week 8 by Langmeier's trainer, Missy Clark, and have quickly formed a partnership, as evidenced by Sunday's win.

“I'm just lucky to be able to have the ride on him; he's such a cool horse,” said Langmeier. “He couldn’t have gone better today.  He's so game in the jump-off, so I knew I could do whatever I wanted with him.”

Earlier in the week, U.S. Olympian Reed Kessler claimed her second $3,000 bonus from SSG Gloves this season following her win aboard Cylana in the $130,000 Ruby et Violette WEF Challenge Cup Round IX.