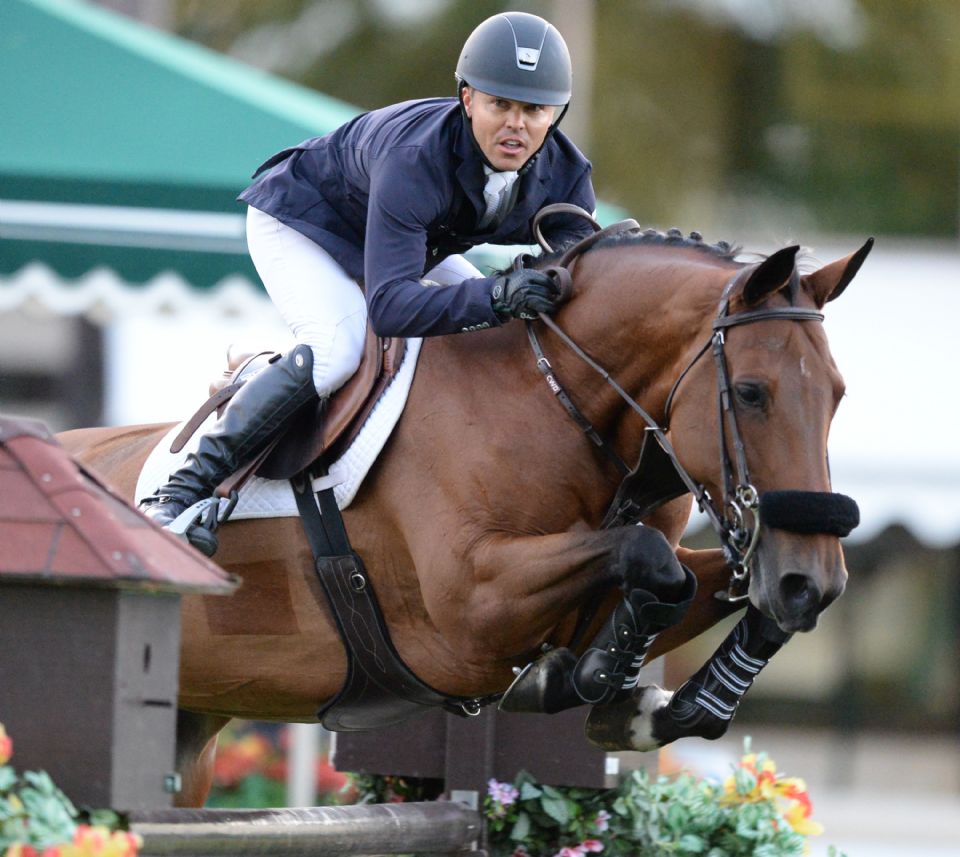 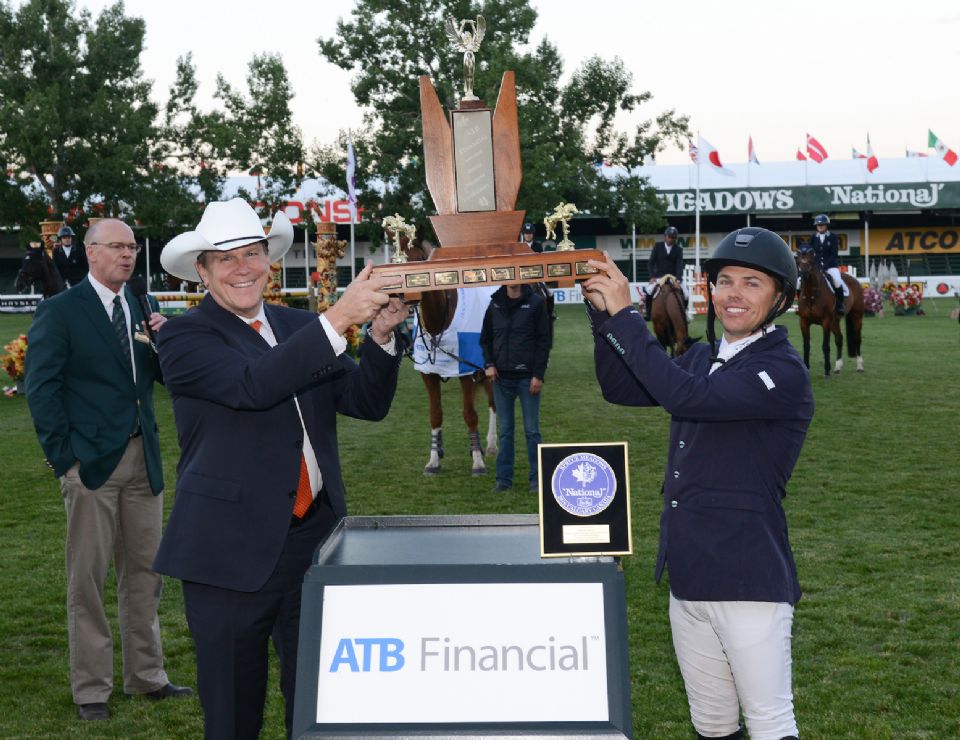 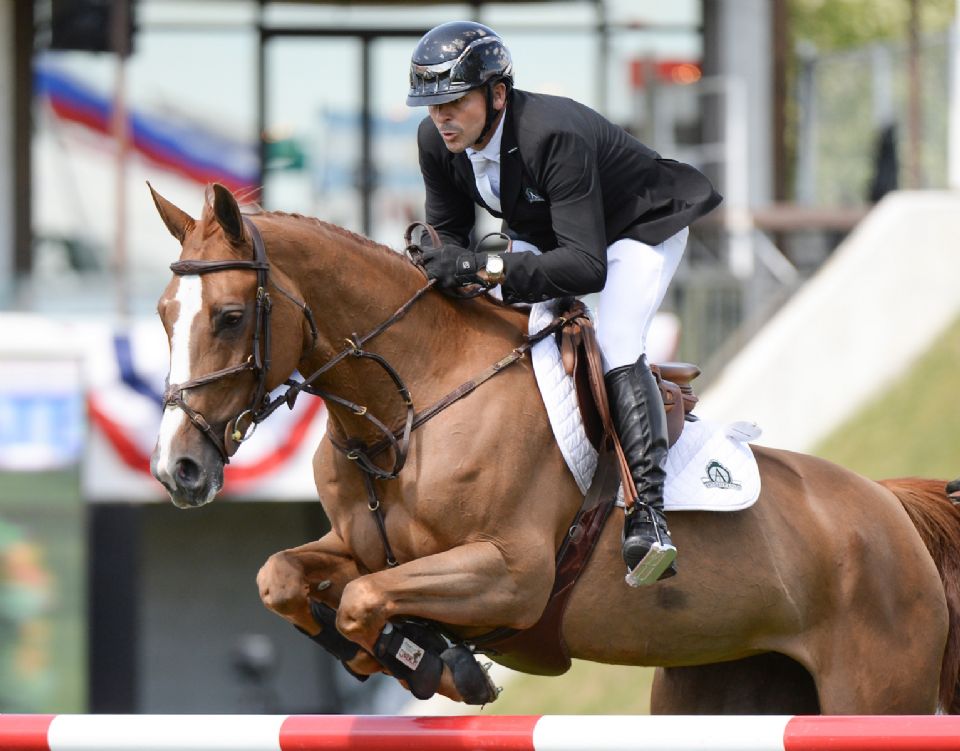 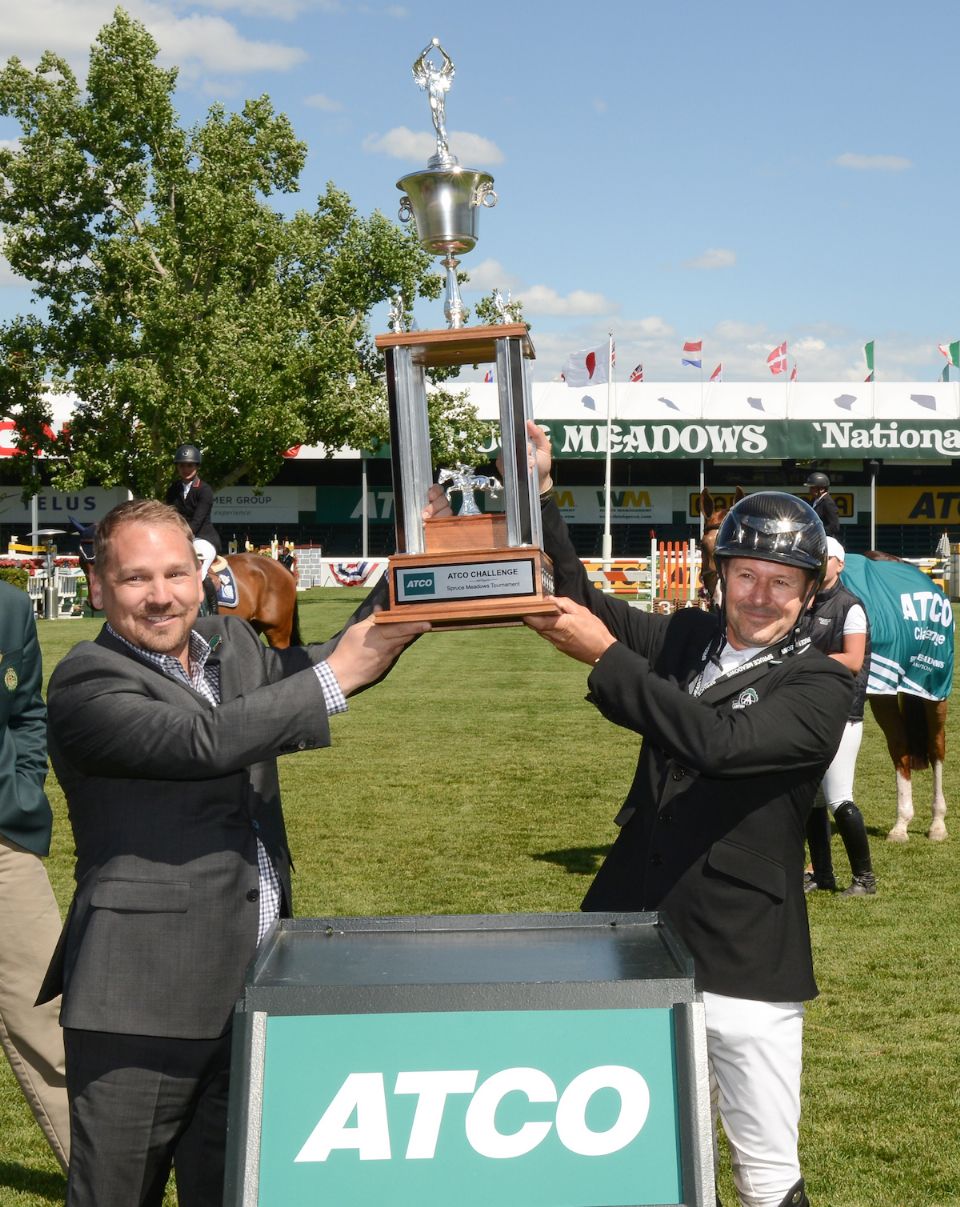 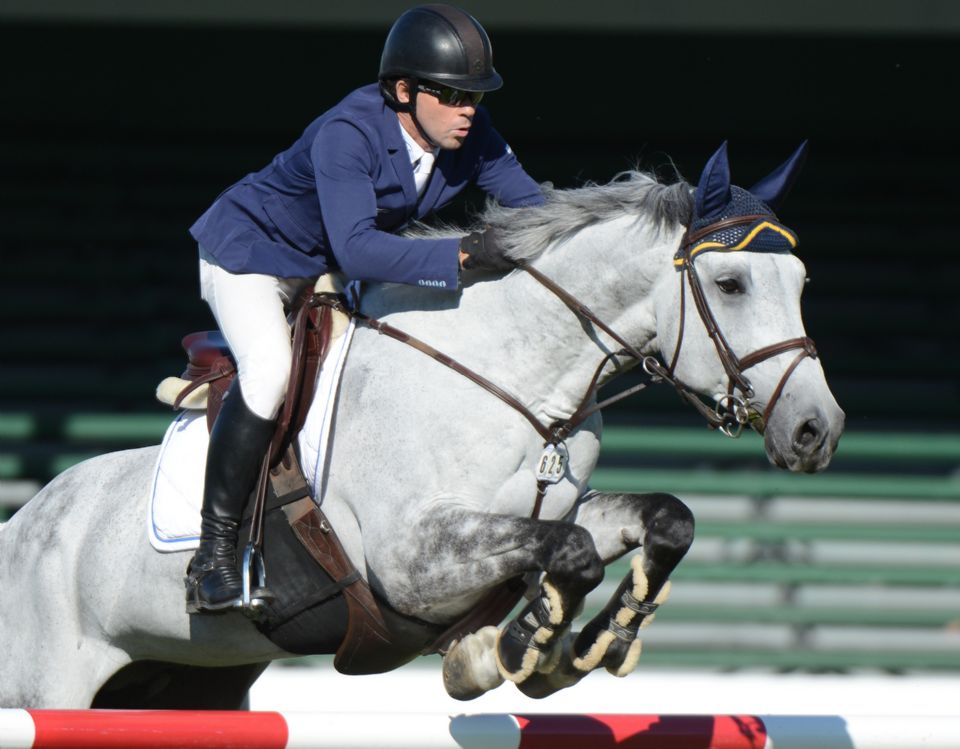 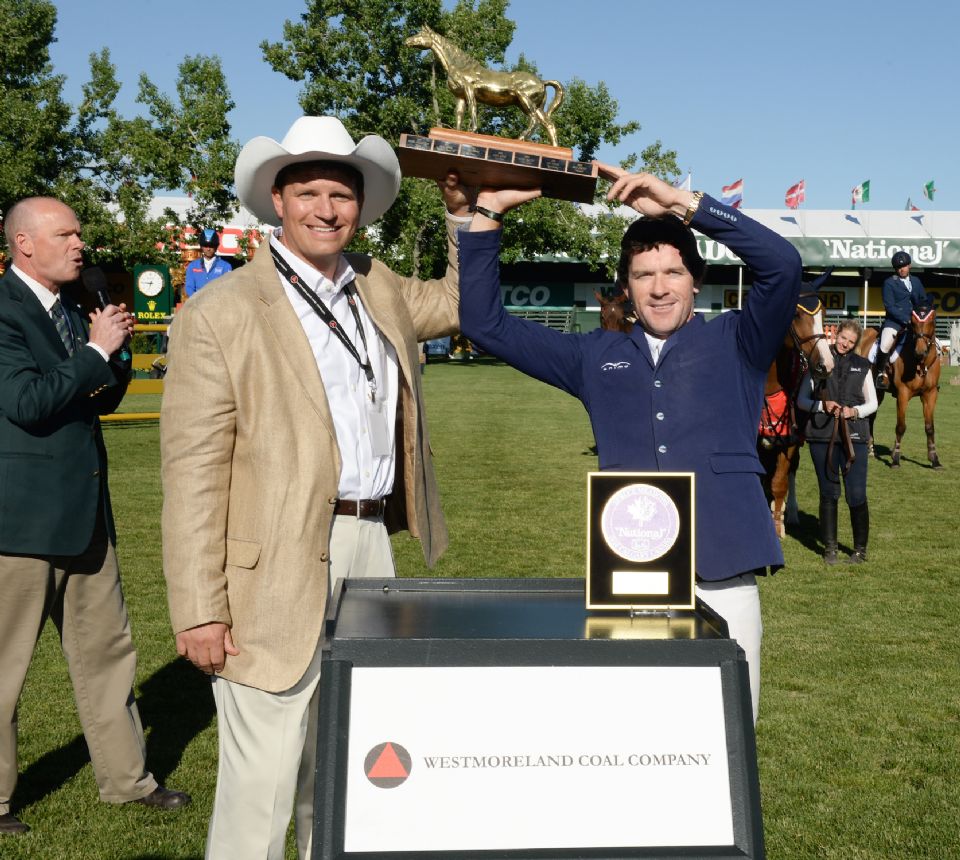 For the second evening in a row, it was American Kent Farrington, ranked number six in the world, who led the highlight competition of the day with Gazelle. This time it was in the ATB Financial Cup 1.55m, where he topped Philipp Weishaupt (GER) on Chico 784 and Eric Lamaze (CAN) on Check Picobello Z. Lamaze won earlier in the day in the ATCO Challenge Cup 1.50m with Melody des Hayettes, and Conor Swail led another victory gallop in the Westmoreland Coal Cup 1.50m on Dillinger. The first CSI 5* week of the Spruce Meadows Summer Series, the ‘National’, presented by Rolex, continues through Sunday, June 12.

Highlights of the week’s competition include the $500,000 RBC Grand Prix, presented by Rolex, on Saturday, June 11, and the $175,000 CNOOC Nexen Cup Derby on Sunday, June 12. The course designer in the International Ring for the ‘National’ Tournament, presented by Rolex, is Brazil’s Guilherme Jorge of Brazil, who will be the course designer at the 2016 Olympic Games in Rio de Janeiro.

There were 43 entries in the ATB Financial Cup, and 15 made it through to the shortened course. There were nine double clear rounds. Farrington and Gazelle were the final ones to go in the jump-off, chasing a leading time of 42.56 seconds set by Weishaupt and Chico 784. Farrington sliced turns and opened up Gazelle’s stride to come home just ahead for victory in 41.46 seconds.

Third place went to Lamaze and Check Picobello Z in a time of 42.70 seconds. Tiffany Foster (CAN) and Tripple X placed fourth when they finished in 42.89 seconds, while Antonio Chedraui (MEX) and La Bamba were fifth with a time of 44.26 seconds.

Farrington has ridden Gazelle, a ten-year-old Belgian Warmblood mare (Kashmir Van Shuttershof x Indoctro), for three years. He co-owns her with Robin Parsky, and felt that she is progressing nicely and finding her form.

This is the fourth time that Farrington will have his name etched on the trophy for the ATB Financial Cup. After years of climbing the rungs of the sport, Farrington has become one of the top names in show jumping.

“I’ve been in the sport for a long time,” he confirmed. “I started at the bottom of the sport, similar to Eric, with no family background. I think it’s a dream to ride [at Spruce Meadows] in the first place, and then to win here is even better. I have a lot of appreciation for all of the people that do this at a high level. I’ve learned from them. I used to watch Eric and Cagney jumping the derby year after year. I’m a student of the sport. To go in there and compete with them, and to win, is a dream since I was a kid.”

Farrington was inspired by Lamaze and the way that he rose through the ranks and was able to continually win in North America and Europe.

He said, “Eric is a tremendous competitor. He took what he was doing in North America and challenged himself again and went to Europe and went full swing at it. He didn’t go halfway. I watched him take Hickstead and go against the best horses in the world and beat them. He really went with no fear, and that was inspiring for me to see, somebody that I knew came from no background in the sport, climbed his way up, and then go over holding nothing back. It was something for me to watch and think if he can do it, then I can try to do it too.”

Lamaze was appreciative of the description, and replied that Farrington is also one to watch for the way he runs his business.

“These are very kind words,” he said. “He has one of the most successful operations in the United States and is one of the best riders in the world. Not only do you see him winning this class tonight and it’s incredible, but you see what he does with his students, and what he does with his whole operation, what he gives back to the sport. That’s what is very impressive to me. We see more than just the winning round. We see what goes on in the morning, what goes on every day, the operation that they’re running. Kent is one of the best today in our business. Ian Millar always says every day in this sport that you’re learning. No one can wake up in the morning and think that they know everything. You learn everything from horses; every day is a learning experience.”

This is the first time that Weishaupt has competed at the Spruce Meadows Summer Series, and he doesn’t see much difference between the Summer Series and the ‘Masters’ in September. While he was in the lead, he was nervous with Farrington and Lamaze still to go in the jump-off.

“To end up in the top three [here], you have to be at your best, otherwise you don’t make it,” he admitted. “The facility, the jumping, the grass field, it’s so much fun and so beautiful. I just love it here. When Kent is last, I’m really scared and starting to sweat. I thought I was going to end up third because I was scared of Eric too. At least he was kind to me, the European guest, but Kent wasn’t really.”

Weishaupt remembered the first time he saw Chico 784 as a three-year-old, when he went to see the promising horse at Winter-Schulze’s farm.

“I saw him standing there, and he’s like the tallest animal on the planet,” he laughed. “I wasn’t sure if it was a giraffe, an elephant, or a horse. I came close to him, and the jockey who sat on him before told me I should be a bit careful. I said, ‘Yeah, no problem.’ I got on him, and it took exactly four seconds and I was lying in the corner and he was kicking behind me. That was our first date. It wasn’t so successful.”

Weishaupt started riding Chico 784 as a four-year-old, and while he termed the horse’s years at five and six as “not very good,” the improvement gained steadily. “He for sure loves the big grass field. He’s a big horse with a huge stride. He’s super smart and actually when you see him, you think he’s a slow horse, but he can turn really quick and he’s really, really sensitive. It’s great fun when he jumps.”

Farrington and Weishaupt said they plan to stick with their top mounts from today for Saturday’s $500,000 RBC Grand Prix, presented by Rolex, while Lamaze will compete with Fine Lady 5.

Lamaze Gets His Win

Opening up the second day of competition at the ‘National’, presented by Rolex, Canada’s Eric Lamaze got his victory. He was a bit of a bridesmaid on opening day with two second place finishes, so he was determined to get the win. He and Melody des Hayettes, owned by Artisan Farms LLC, topped a 12-horse jump-off in the ATCO Challenge Cup 1.50m. Seven of the 12 were double clear out of an original 30 entries in the competition.

“I’ve gotten used to winning one class on the first day here,” Lamaze said with a smile. “Whether it’s luck or not, I’ve won quite a bit over the last decade and I always feel good winning the first day. Yesterday I was second twice. In the last competition, I really tried. I was first to go, and I was not going to be second! I gave it a go, but unfortunately had one down. I like winning here. It’s not easy to win here.”

Lamaze took the ride over on “Melody” from Tiffany Foster at the end of 2015, so their newer partnership is still developing.

He said, “I didn’t know where I was going with that, but I knew that the mare was careful and she liked to go fast. I didn’t think I would be winning at Spruce Meadows in the 1.50m this quickly. Sometimes you just click with a horse, and it goes faster than you think. This one seems to be my kind of horse.”

With a second place in the speed competition yesterday and the win today, Melody has no problem going fast day after day. Lamaze confirmed, “She’s a runner. She’s not a power jumper; she’s a great 1.50m speed horse. But that’s her job; it’s what she does. She enjoys going fast. For the 1.50m [here] if you don’t have that, you might as well not compete.”

Ireland’s Conor Swail has started his Spruce Meadows Summer Series with a bang by taking a second win on the second day. Yesterday he and Cita were victorious, while today Swail rode Dillinger, a nine-year-old Belgian Warmblood stallion (Contender x Capitol I) owned by Susan and Ariel Grange, to the win in the Westmoreland Coal Cup 1.50m.

Swail topped a jump-off with 12 in it, while the original start list had 28 entries. He was one of four double clears, and he posted a time of 39.87 seconds. Luis Alejandro Plascencia (MEX) and Salamera de la Nutria slotted into second place in 41.56 seconds. Japan’s Taizo Sugitani and Avenzio were third with a time of 41.90 seconds, while Sameh El Dahan (EGY) and WKD Diva were fourth in 42.18 seconds. Fifth place went to Francisco Pasquel (MEX) and Naranjo, who had a time of 42.58 seconds with four faults.

Dillinger has been coming along nicely for Swail, and at just nine years old is showing promise for the future. Swail said that having two rails in yesterday’s competition may have helped Dillinger win today.

“Yesterday he went in and was a little green; he knocked the first fence and the third fence. It probably helped me for today actually because we had a nice, relaxed round after that,” he described. “After he had a mistake [yesterday], I kind of fancied my chances [today]. The course really suited him. It was just really big gallops. He left one step out everywhere more than anyone. I really used his stride to win today. Today I thought he was just outstanding.”

With Dillinger’s large size, Swail has been working on improving his speed.

He noted, “He’s very talented, very scopey. He’s a big guy, so he’s a bit more awkward than some of the other ones I have, but he’s a good horse and he’s had some great results.

Regarding his success so far at the Summer Series, Swail said, “It’s really hard to win here, and I’ve had a great start. I have a great bunch of horses. It’s really nice to see that the owners are seeing such great successes.”