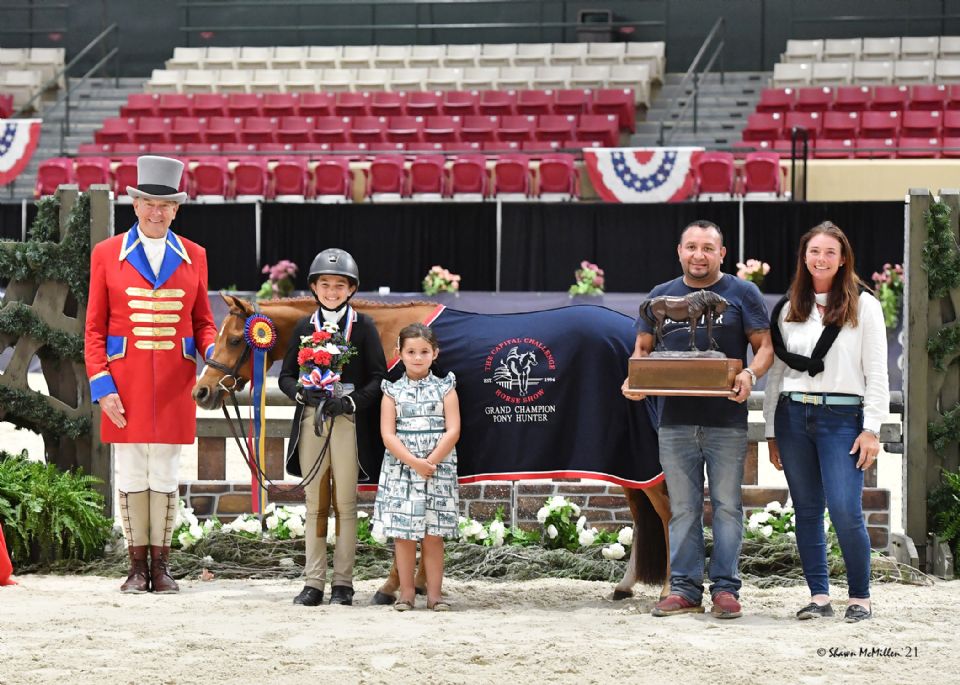 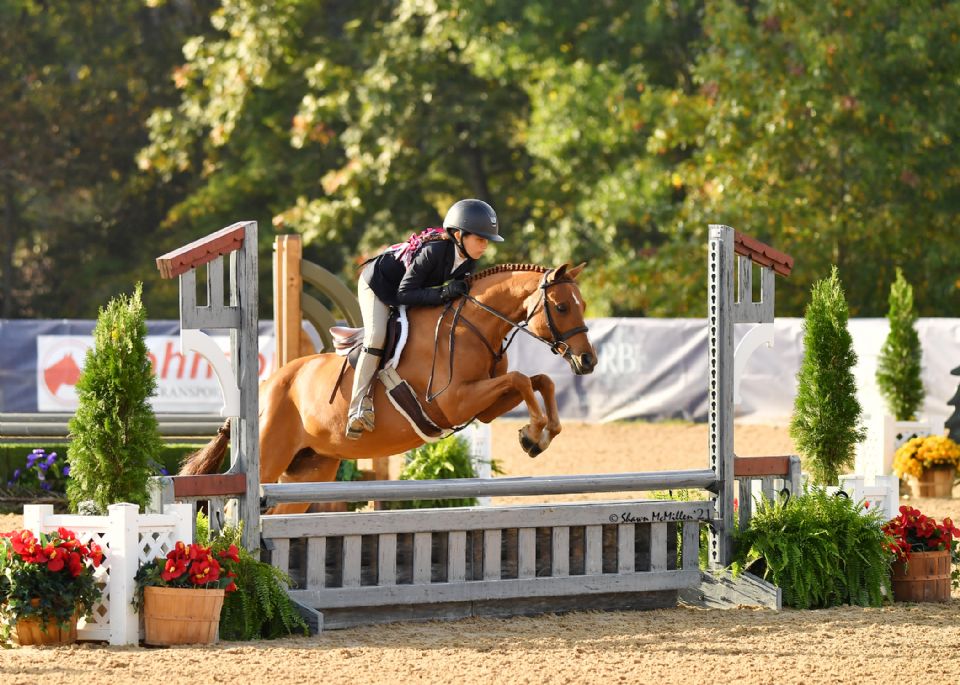 Lauren Padilla and So Enchanted.
Photo by Shawn McMillen Photography 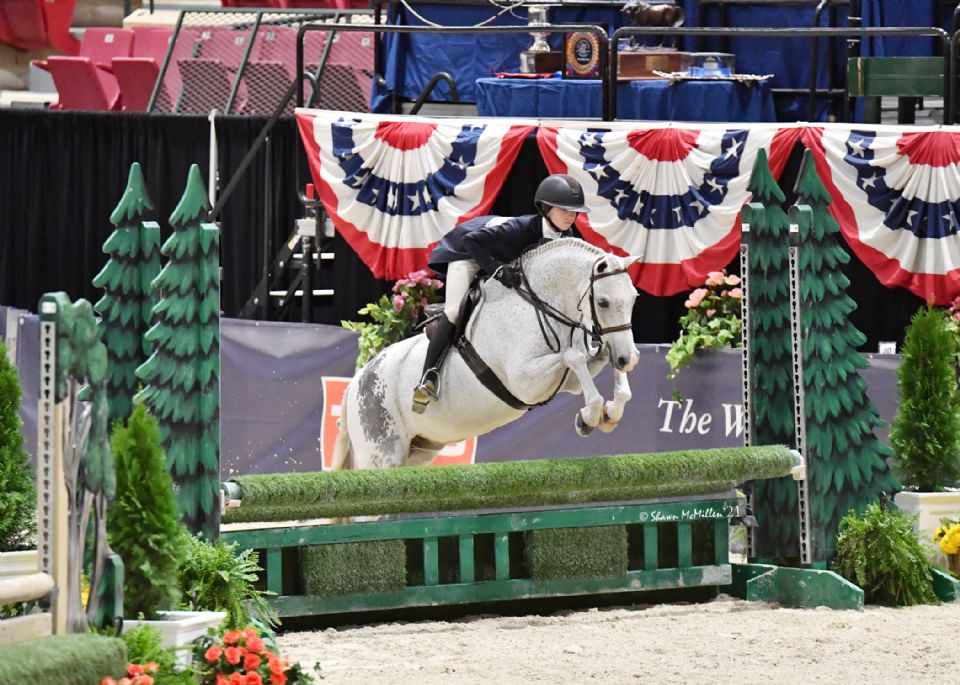 Olivia Sweetnam and On Your Mark.
Photo by Shawn McMillen Photography 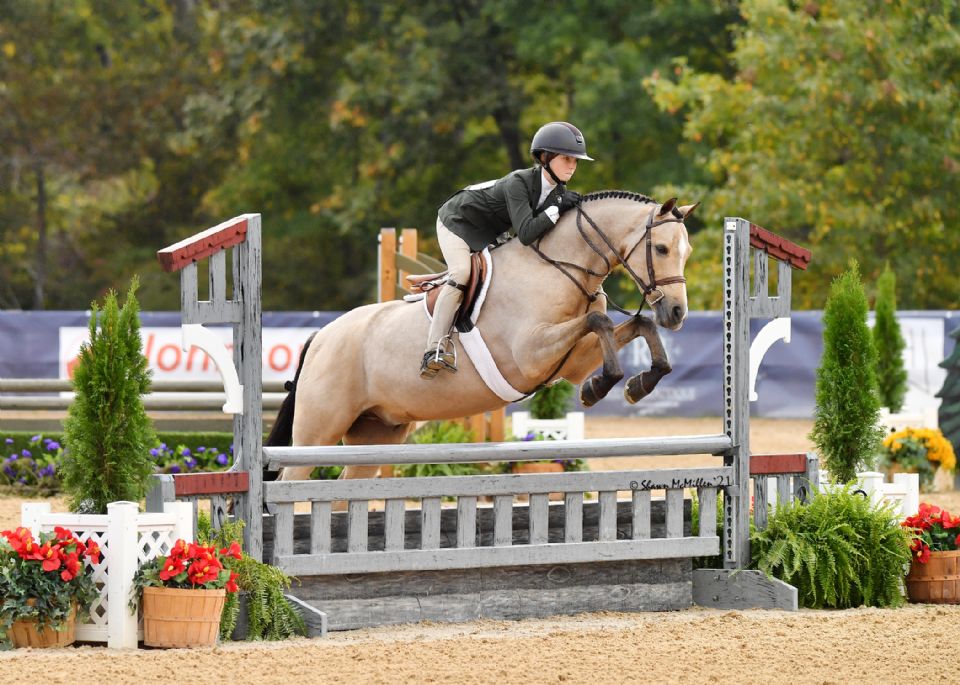 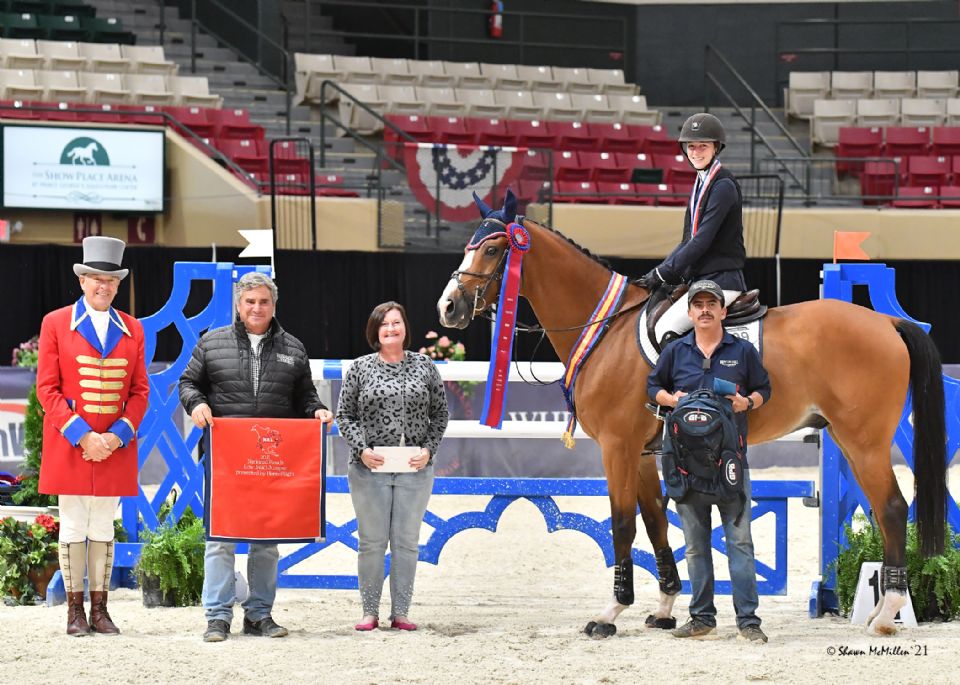 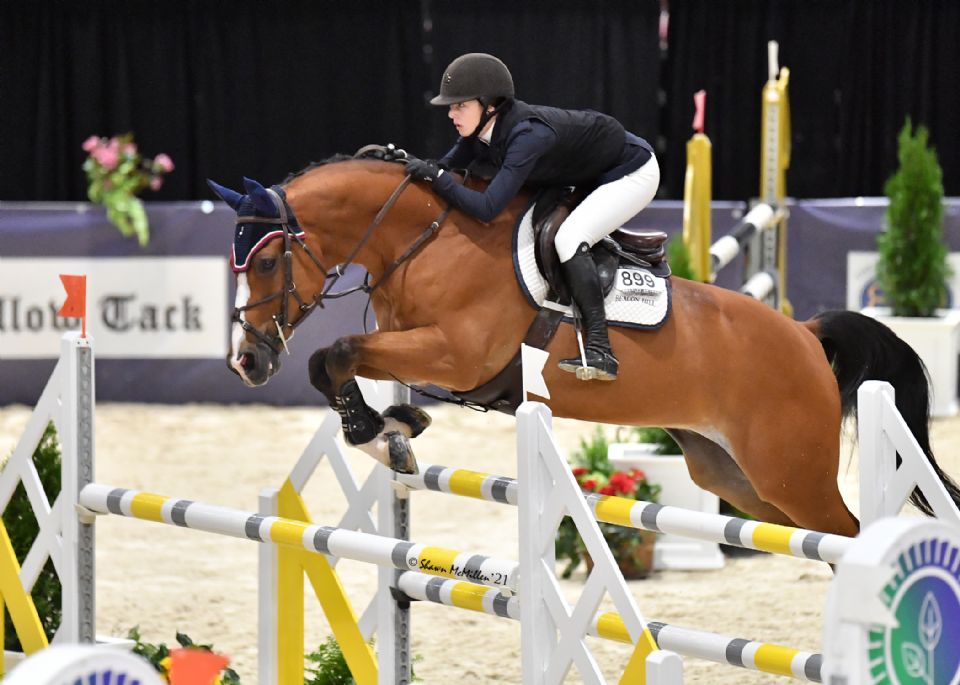 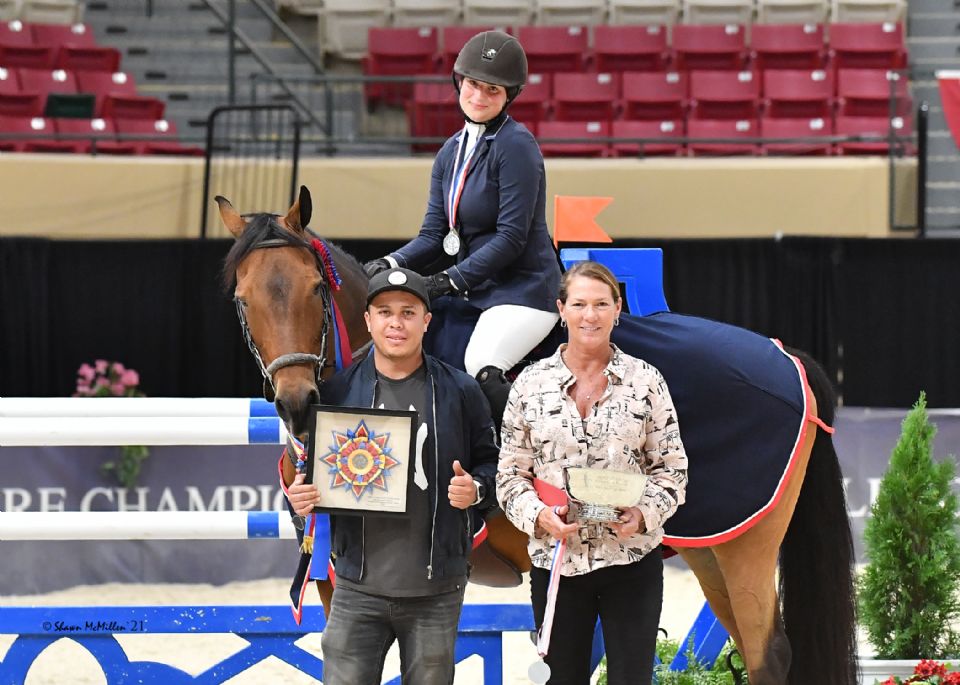 Stella Propp and Zernike K in their winning presentation for the $10,000 Medium Jr/Am/AO Jumper Classic.
Photo by Shawn McMillen Photography 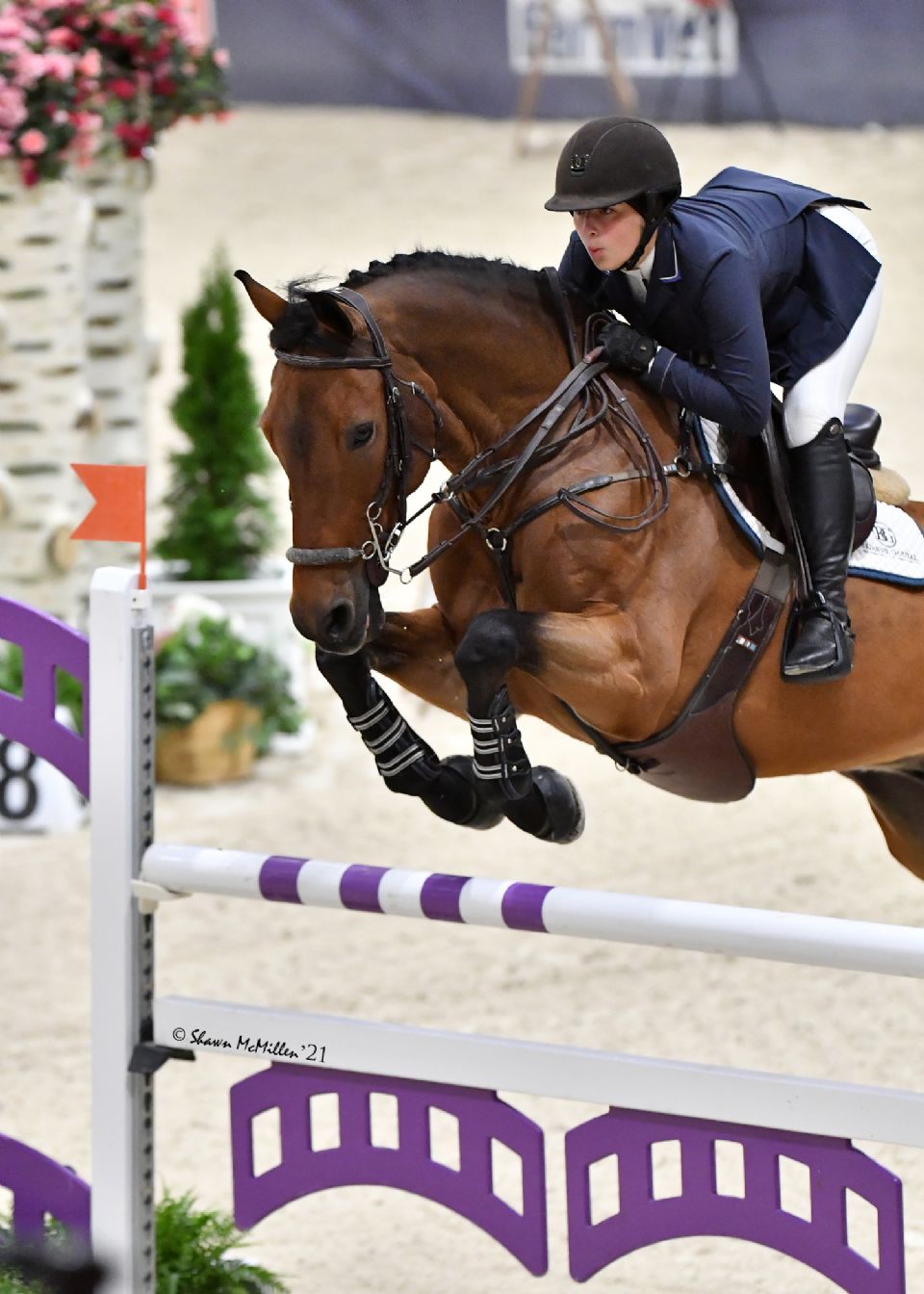 Out of a field of more than 100 ponies, Lauren Padilla and Highland Farm, LLC’s So Enchanted received the Grand Pony Hunter Champion title on Saturday, October 9, at the Capital Challenge Horse Show, held at Prince George’s Equestrian Center in Upper Marlboro, MD.

The Grand Champion title, sponsored by Enchantment Farms, was awarded to the Pony Hunter who accumulated the most points over all three divisions. Padilla, of Palos Verdes Estates, California, and So Enchanted earned the championship in the Small Pony Hunter division, sponsored by Ox Ridge Riding and Racquet Club. The duo won the handy stake, earned a second place in an over-fences class, and took home the blue ribbon in the under saddle.

“My rides on her were great this week,” said Padilla. “She was really happy being here because the rings are so spacious and open. She felt happy and loose here.”

Padilla earned The Harper Taskier Wright Memorial Trophy, given in memory of Harper by her loving parents Michael and Alexandra Borisoff Wright, friends, and family whose lives she touched, for her championship in the Small Pony Hunters. The Best Pony Rider Award, sponsored by Archibald Cox and Brookway Stables was also awarded to Padilla for her Grand Pony Hunter Championship. For this honor Padilla received The Kitty Borissoff Memorial Trophy, donated by her many friends.

This year was Padilla’s first appearance at Capital Challenge, and the rider made it one to remember.

“It means a lot to be champion here,” commented the 12-year-old rider. “I was really excited to just be here and qualify, and it was even more exciting to earn grand champion! My handy round was my favorite. It felt great, and we got a 90.”

Padilla and So Enchanted, or “Lex” as he is known in the barn, began their partnership earlier this year. Although the duo took time to adjust to each other, they are now a pair to watch out for in the show ring.

“Lex is a really nice, fun, and incredible pony,” said Padilla of the 12-year-old Welsh Pony Cross mare. “At home she loves to play in turnout. When I first got her, we didn’t really connect right away but as I got to know her after a few weeks, we started to understand each other.”

The Medium Pony Hunter division championship, sponsored by Cheryl Olsten, was presented to Olivia Sweetnam and Sweet Oak Farm’s On Your Mark. Sweetnam was also awarded The Lafitte de Muze Trophy, sponsored by Cheryl Olsten, for her championship. Reserve champion in the Medium Pony Hunter division was received by Ava Barnes aboard Robin Greenwood’s By4Now.

Barnes also won the WCHR $2,500 Pony Challenge, sponsored by Sweet Oak Farm, with Rico Suave, owned by Ponies & Palms Show Stables LLC, and was presented with the Stewart-Warner Cup for pony riders, which is given in memory of Laurie Gilbert Stewart and Mary Warner Brown by Donald E. Stewart, Jr. and Louise W. Serio.

In her first major finals win, Emma Blumenkrantz, 16, of Colts Neck, New Jersey, took home all of the spoils after topping a field of 29 entries in the $10,000 North American League (NAL) Low Junior/Amateur/Amateur-Owner Finals, presented by HorseFlight on her own Collin W.

Eight were clear in the first round to advance to the jump-off over a course set by Ken Krome of Westminster, MD. Blumenkrantz was fast and clear to take the win in 36.818 seconds. Gabriella Curry and Ciemusic Z, owned by GA Stables LLC, finished second as the only other double clear in 37.879 seconds. Third place went to Sydney Myers riding Myers Equestrian LLC’s Skara Glen’s Signature. They had four faults in the jump-off in 34.989 seconds.

“My horse jumped incredible,” said Blumenkrantz. “Going around the course it was really a great opportunity to let him go in some places, like from jumps two to three in the jump-off. I got to watch the first and second ones go. I stood at the gate and got an idea of how it rode and where you could make up time and where you have to check yourself. The hardest part was going to be the turn back to the double [combination], keeping him with me but not letting him cut off the rail, which sometimes he likes to do.”

Blumenkrantz has been riding Collin W, “the barn favorite,” for nearly two years.

“He’s been great bringing me from the Children’s Jumpers to here,” said Blumenkrantz of the 14-year-old Dutch Warmblood gelding by Vincenzo x Placido. “His hind end is powerful when you’re going around there. He helps you out everywhere, and he is a great horse.”

This is Blumenkrantz’s first big win and said it was a “great feeling” to stand in the winner’s circle.

“It was an incredible opportunity to even be able to show here,” she said. “It’s just such a great feeling, walking down the ramp and into the ring. Your horse is ready, and you’re ready, and you’ve worked all year to get here. Winning here gives me confidence going into the next one and knowing he’s going to be there for me and right there with me, ready to game on.”

Propp was the first rider in the class to successfully complete the first round fault-free. An additional three riders advanced to the jump-off to join Propp and Zernike K. Propp then led the way in the jump-off with a fast time of 37.460 seconds that could not be beat.

“For the first round I was honestly really nervous,” commented Propp. “I was watching the Low Junior/Amateur Jumper class before, and people were having some trouble. Although I was kind of freaking out internally, I was trying to hold it together, and my goal was to just go around and hopefully jump clear. I wanted to be consistent and have all my distances make sense so I wasn’t getting my horse into any trouble.”

She continued, “My plan that I discussed with my trainers for the jump-off was that I wanted to go fast and be neat around the turns but the main goal was to go clear. I tried my best to stay cool, calm, and collected, and get around those turns as fast as I could, but also focus on keeping the jumps up.”

Propp is in her final junior year, and she was excited to have her first win at Capital Challenge. The rider was thankful for trusted mount, Zernike K, to help her earn this victory.

“I got him about two winters ago in Wellington, and he has been unbelievable,” said Propp of the 17-year-old Dutch Warmblood gelding. “I was definitely very nervous coming into the jumpers, and he was my first real jumper. I trust him so much and in classes like this. I feel like I can do anything with him, and I don’t have to be scared if I get into trouble because I know he’s going to be there to help in whatever way he possibly can. I am so thankful for him.”

Second-place honors went to Alexa Elle Lignelli aboard Hampton Green Farm LLC’s Darc Kiss Z with a jump-off time of 38.516. Kathryn Hall and her own All In 9 finished in third place after stopping the timers at 42.046 seconds.