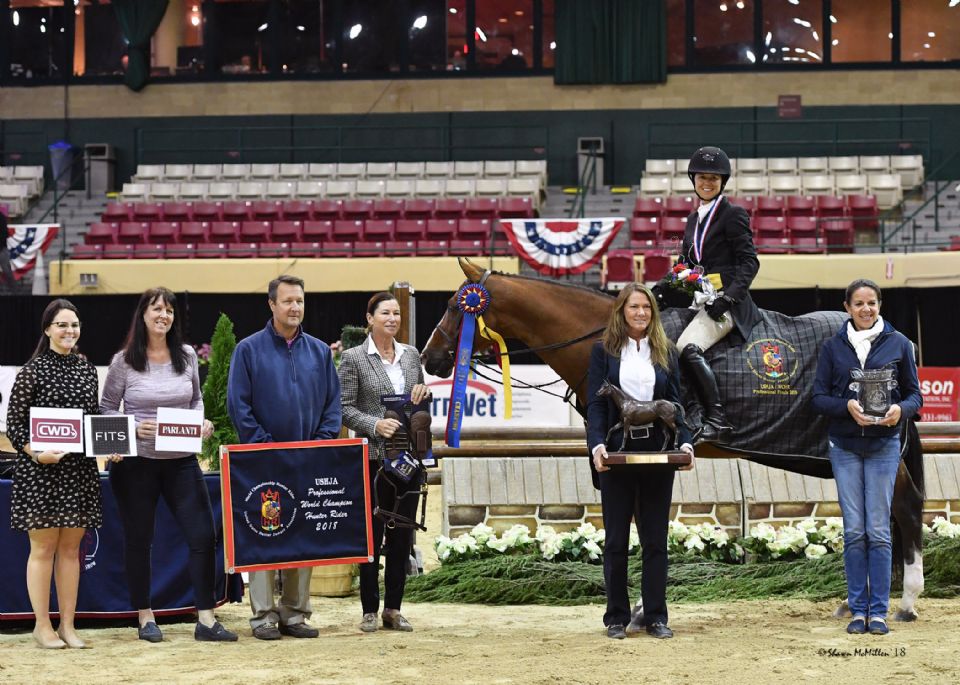 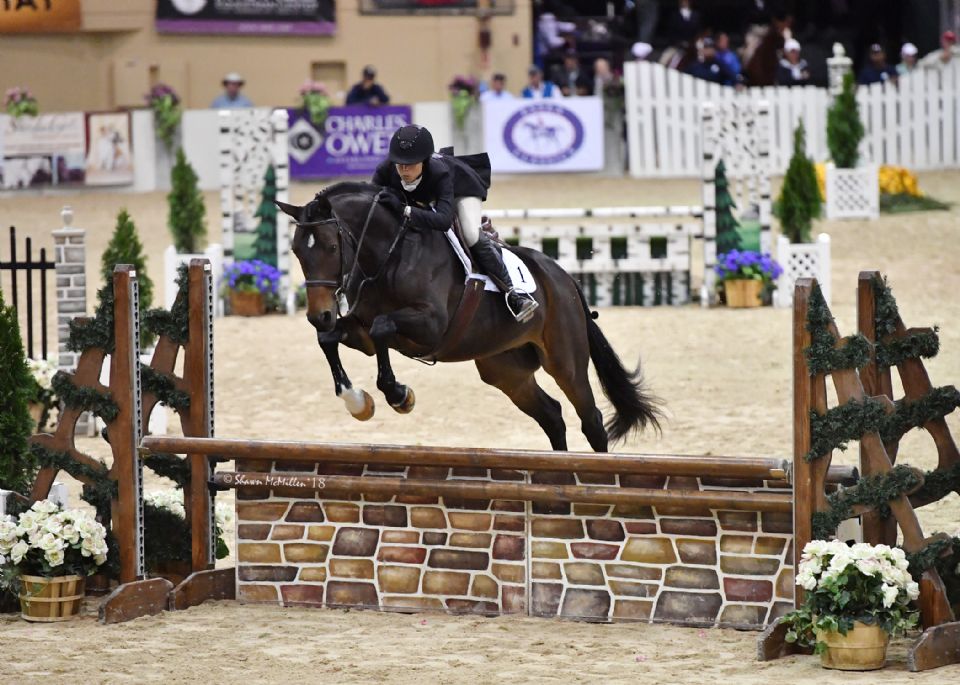 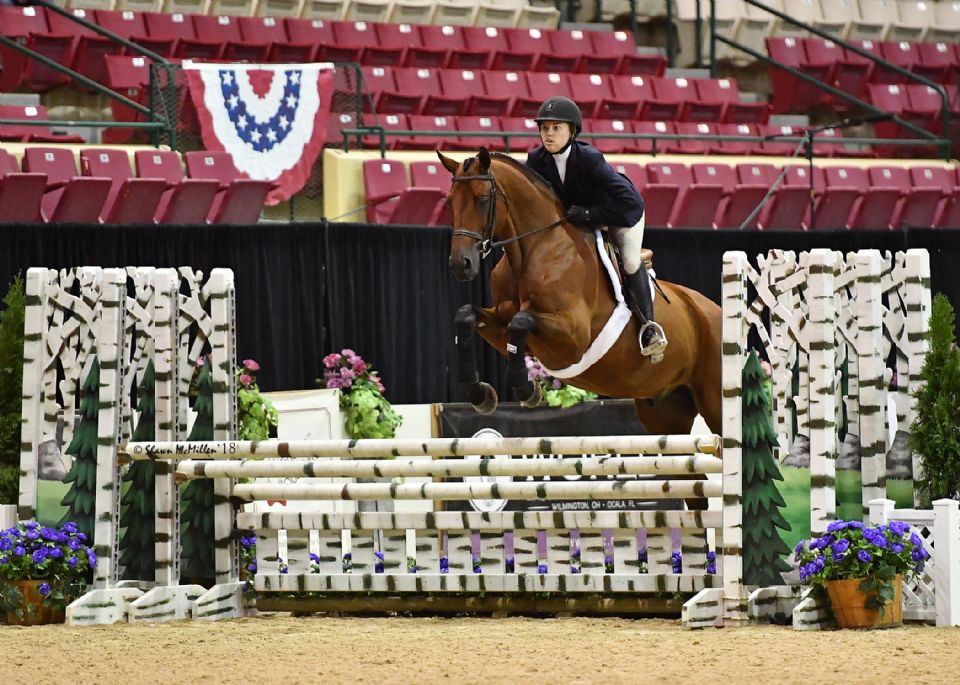 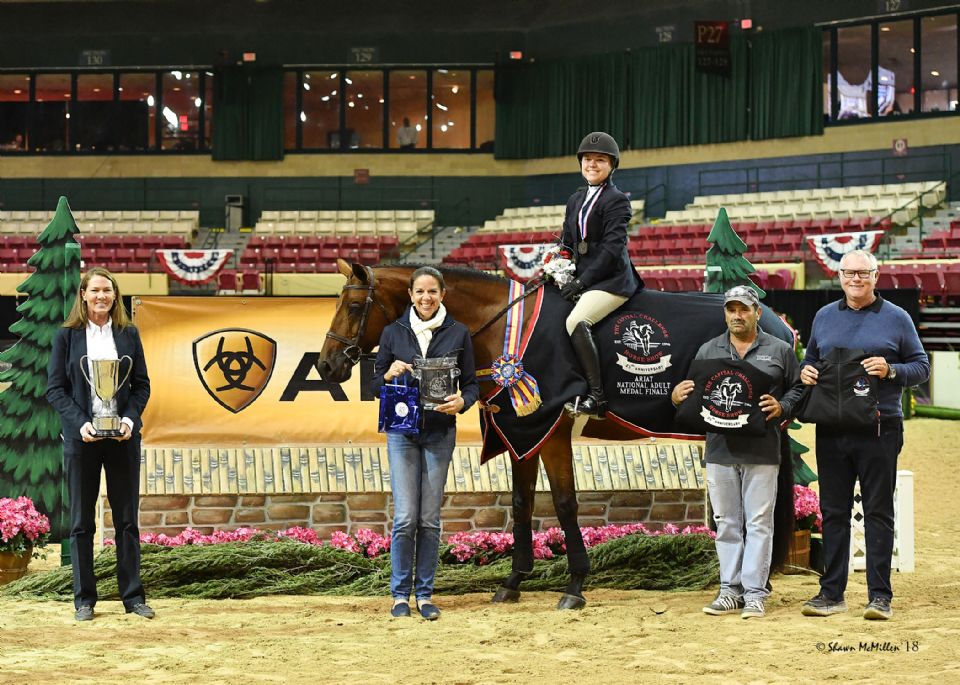 The top six professional hunter riders in the country went head-to-head at the Prince George’s Equestrian Center, with Liza Boyd of Camden, SC, ultimately emerging victorious for the second year in a row following three phases of competition.

“It’s a great feeling; it’s exciting,” said Boyd. “I’m glad my husband, Blake, and my daughter, Elle, are here to experience it with me.”

Victoria Colvin, Sandy Ferrell, Jenny Karazissis, Amanda Steege, Scott Stewart, and Boyd returned on Friday night to jump the opening round over a handy hunter course on the horse of their choosing.

Stewart, who led coming into the night on a score of 92.66, also topped Friday’s ‘playoff’ round with a score of 92.33 to win the playoff phase and cement his spot in the final four.

“I liked the new format; it was really fun,” said Stewart of Wellington, FL, who has competed in the class a record 19 times. “Going in the first round on our own horse in the handy gave us a good shot to do our best.”

Joining him as the top four riders to return to each jump four courses, rotating turns on horses generously donated by Claiborne Bishop/The Barracks and the University of Virginia (UVA), were Boyd, Colvin, and Steege.

With a score of 92.33 on her first mount, Falcon – who ultimately received the Far West Farms Perpetual Trophy, donated by the Karazissis Family, as the horse with the highest cumulative four-round score – Boyd set the pace that she would maintain for the remainder of the evening.

“Horse one and two, I was pretty calm and relaxed,” said Boyd, who was competing in the class for the sixth time. “Horse three, I started getting a little more nervous when I trotted in, and they said I was in the lead.

“On the fourth horse, as I was at the gate, I said to my dad, ‘I really have to go for it,’” continued Boyd. “And he said, ‘Be careful that you don’t go for it too much that you mess up.’ That was a pretty good thing to say; I just tried to work off some pace but not get too risky.”

That plan paid off, as Boyd earned a 93.50 in the final round and clinched the win with an overall 366.82 score. Stewart claimed the reserve championship with a cumulative score of 361.50, and third place went to Steege with a 354.99 score.

“I had a great time,” said Steege. “I was much more relaxed this time doing the class than I was the first couple years I got to do it. It was fun; the horses went great.”

Colvin placed fourth in her second time riding in the event with a score of 348.99. She said, “I always really wanted to do this class when I was a junior, so to be able to just compete in it is wonderful.”

“We have to really thank The Barracks for their horses,” concluded Boyd. “We have to thank the horses throughout the year who got us here – Private Practice, Cassanto, Lafitte, Private Life – these are extraordinary horses with amazing owners. That’s a big thing and why we’re all here. We’re lucky to have such great horses.”

Completing a fairytale week at Capital Challenge, 21-year-old Martha Ingram led the victory gallop at yet another major event, the Ariat National Adult Medal Finals on Friday, October 5. She and Airport 48 ran away with the win by more than six points, completing two rounds with a total of 175.16. The Nashville, TN, resident scored 88.50 in the first round and led all the way through the class after scoring an 86.66 in round two.

Ingram added this victory to those in the North American Adult Equitation Championships during the Capital Challenge Equitation Weekend, sponsored by Bigeq.com. She also rode Lyons Creek Bellini to the win in the WCHR Amateur-Owner 3’3” Hunter Challenge and reserve champion in the Amateur-Owner 18-35 3’3” Hunter division.

“I’m feeling really ecstatic,” said Ingram. “As the first national horse show [of the indoor season], you’ve been working all year and you want to come in and have a good horse show and set your season off. It’s just been a whirlwind and I couldn’t be happier.”

Last weekend’s championship class was the first time Ingram had shown Airport 48, a 15-year-old Holsteiner gelding owned by her father John, in the equitation. Two weeks prior, they competed in a three-foot hunter class in Kentucky, but they do not have an extensive relationship despite her family owning him for six years.

After a fall and two fractured fingers last week, Ingram decided to stay on Airport 48 for the Ariat finals, even though her original equitation horse (who wasn’t quite right for last weekend’s equitation championships) was ready for the class. “Airport’s mouth is a little bit easier than the other horse,” she explained, “so with two not 100% fingers, to ride [Airport] was the better idea.”

Ingram speaks fondly of Airport, who has become a member of the Ingram family.

“He’s just such an incredible horse that he can do it all: hunters, jumpers, derbies, now equitation. He’s just really special,” she described. “He’s just a simple guy and the sweetest horse I’ve ever met in my life. Never once in his entire life has he pinned his ears or tried to bite. Even when you’re doing his girth, his eyes are bright, his ears are laser beams forward. He just wants to please.”

Coming into the Ariat National Adult Medal Finals, Ingram wanted to make sure she executed her plan.

“There were specific parts of the course I really wanted to make sure of and I went over them with [my trainer] Tom [Wright],” she said. “I wanted to make sure that no matter what ended up happening, I was deliberate in each of those small details. Sometimes you can get a little bit excited about what class you’re doing and forget those things, so that was really my goal and I think I accomplished that.”

“It was a big goal,” said Ingram, who just started showing in the equitation this year. “I enjoy doing the equitation, but my level of riding just wasn’t quite there yet when I was younger. It’s a different class than I normally do, the jumps aren’t big. It’s just something really fun and special. It’s a big goal and to accomplish it was…I just can’t believe it really!”

The Capital Challenge Horse Show, which runs through Sunday, October 7, continues on Saturday with the championships for the pony hunters, the 16-17 junior hunters, and the Children’s Pony Hunters in the daytime session. The evening session features the $12,000 North American Low Junior/Amateur-Owner Jumper Challenge and the $15,000 North American Medium Junior/Amateur-Owner Jumper Challenge.