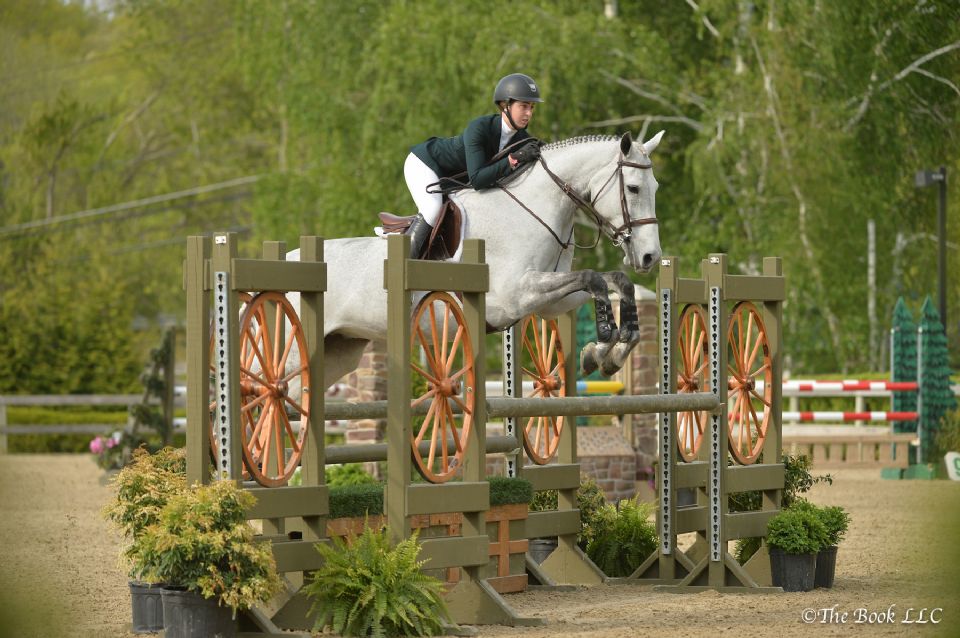 Madison Goetzmann and Play It Again.
Photo by The Book 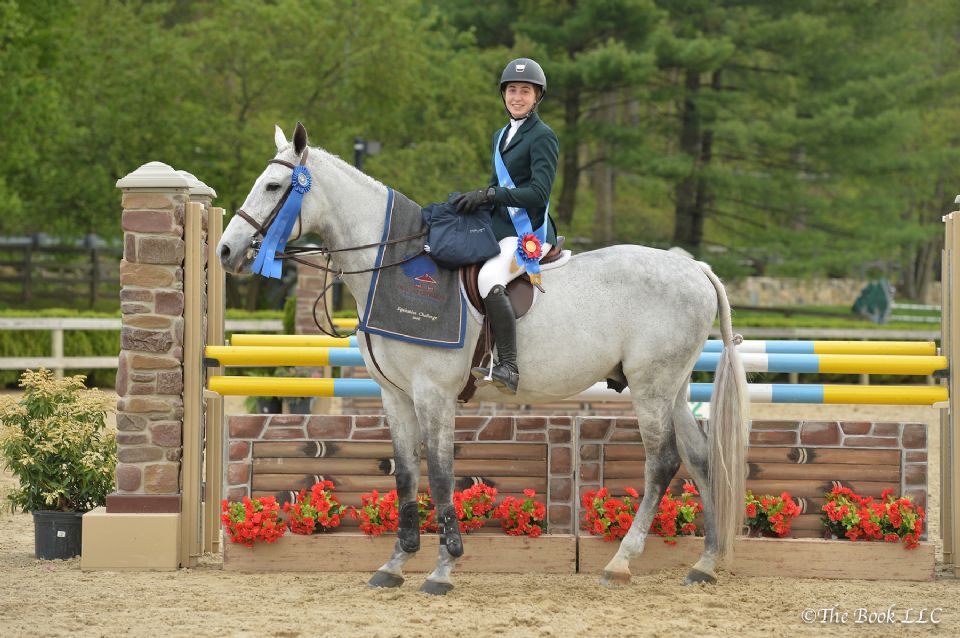 Madison Goetzmann and Play It Again in their winner's presentation.
Photo by The Book 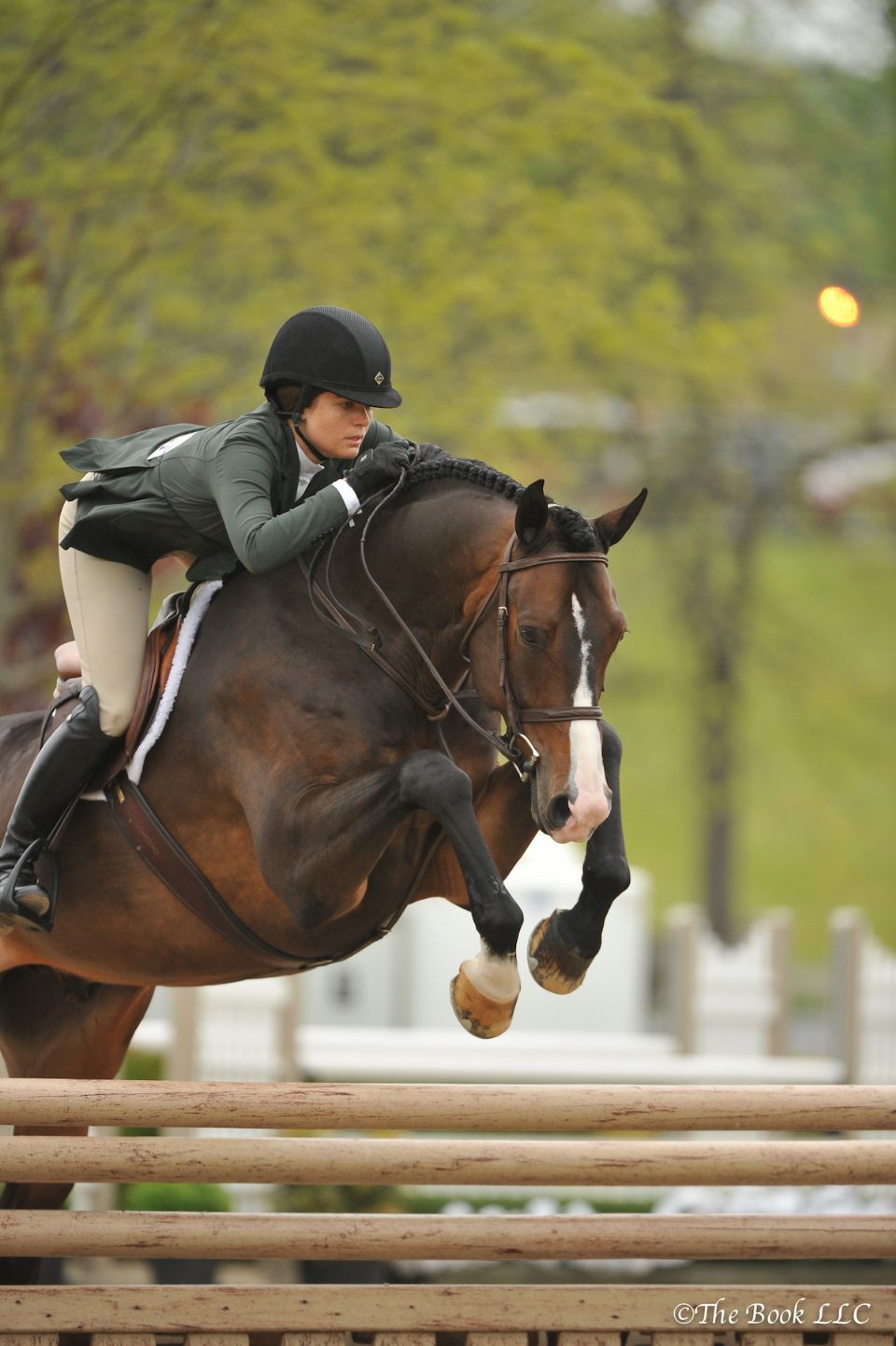 Kelly Tropin and Chablis.
Photo by The Book 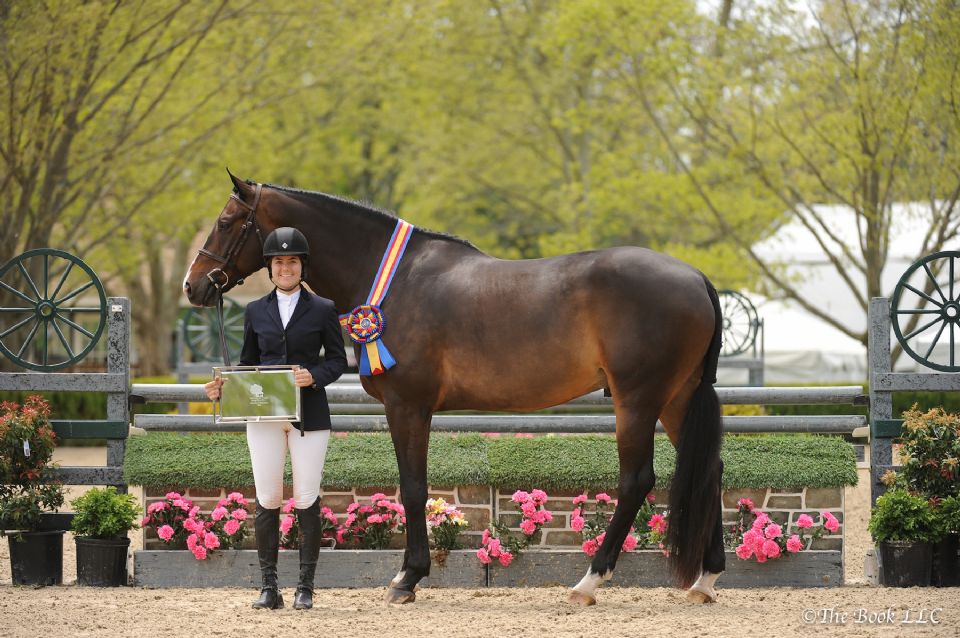 Kelly Tropin and Chablis in their winner's presentation.
Photo by The Book 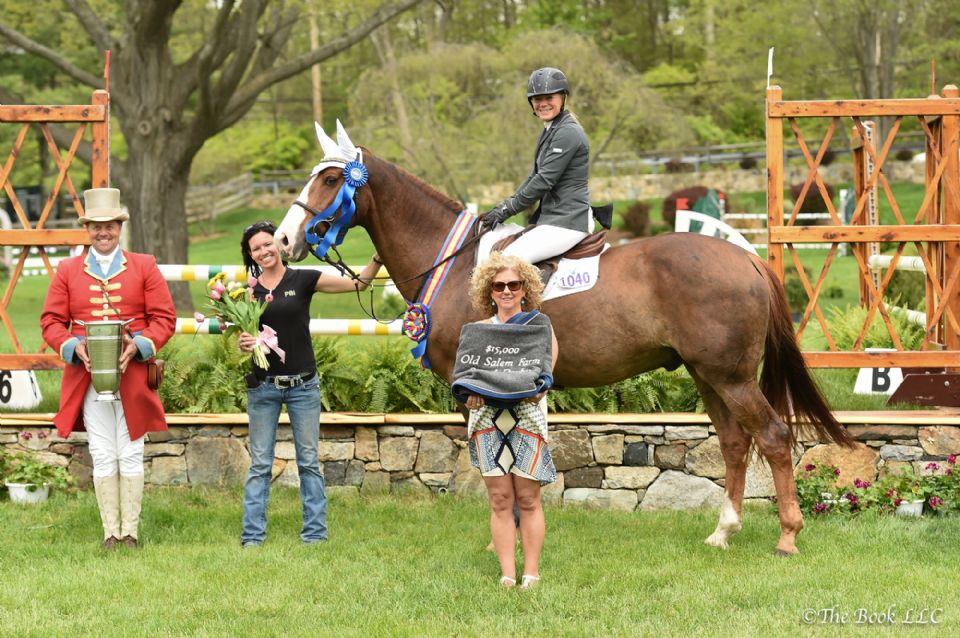 Penny Brennan and Sun Tzu in their winner's presentation with Lisa Schultz of TownVibe, along with Brennan's groom and ringmaster Alan Keely.
Photo by The Book 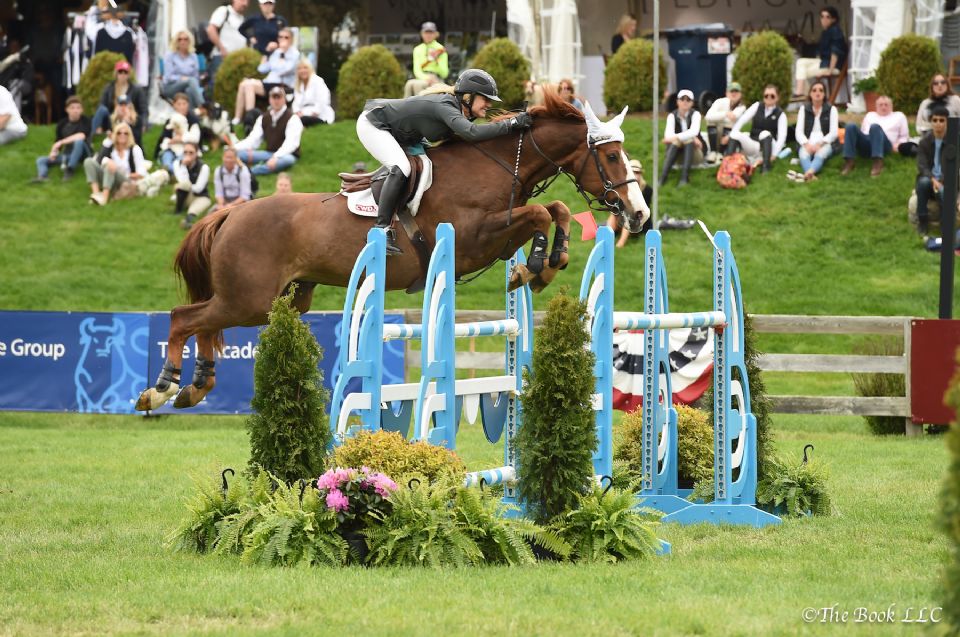 Penny Brennan and Sun Tzu.
Photo by The Book


Madison Goetzmann, 16, of Skaneateles, NY, rode to victory in the $5,000 Equitation Challenge aboard West Hill's Play It Again on Saturday at the Old Salem Farm Spring Horse Shows, running May 10-15 and May 17-22 at Old Salem Farm in North Salem, NY. Highlighting Saturday’s hunter competition, Kelly Tropin of New York, NY, piloted her own Chablis to Grand Amateur-Owner Hunter Champion, while Penny Brennan flew to a win the $15,000 Old Salem Farm Speed Derby, presented by TownVibe, in the irons of her own Sun Tzu.

Goetzmann, who trains with Stacia Madden of Beacon Hill Show Stables, was sitting fourth on an 86 before the top 12 riders in the Equitation Challenge returned for the second round.

“Whenever we riders are coming back a little behind, [Stacia] always gives us confidence, but also a push to win,” said Goetzmann of her trainer. “That is exactly what she did today – she told me to be very smooth, but also to stay calm and collected.”

Madden's advice proved correct as Goetzmann scored an 89 in the second round for the win. T.J O'Mara claimed second on a pair of 87s, while Vivian Yowan took third with an 88 and 85.5. Lilly Higgins scored an 83 and 90 for fourth, and Ellyn Fritz capped the top five on scores of 82 and 85.

“I really loved the course,” said Goetzmann. “It suited my horse well. He's very slick and efficient, so I just really needed to focus on consistency and smoothness throughout the whole round. The first round was very good. I maybe left the first line a little long which resulted in a lower score, but the second round was one of the best rounds I’ve ever had on him. We really were in touch for the whole thing, and he shined throughout both rounds.”

With two junior years left, Goetzmann has her sights set on placing well in equitation finals this year, with a specific dream to win the USEF Show Jumping Talent Search Finals.

Goetzmann is no stranger to equitation success at Old Salem Farm after placing second in the Equitation Challenge in 2015 behind winner Victoria Colvin.

“Old Salem is honestly one of my favorite shows. I love just the environment,” she said. “I would like to thank Beacon Hill and Stacia Madden, but also my mom Sheila and dad Eric for supporting me throughout all of this.”

Kelly Tropin rode her own Chablis to Champion in the Amateur-Owner 18-35 Division, sponsored by Charles Owen, after picking up two firsts and one fourth place ribbon over fences and winning both the handy round and the under saddle.

Tropin, who rides with Peter Lutz and Mary Manfredi at Davenport Show Jumping in North Salem, NY, has known her eight-year old Wurttemberger gelding since he was four, and purchased him out of her own barn when he was six.

“The first time we saw him, I was standing with Peter next to the Rost Ring at WEF and he trotted by,” said Tropin. “He is very flashy and Peter said to me, 'I have to have that horse'.”

A determined Lutz got his wish, and Chablis joined his string before Tropin took up the reins. But for Tropin, having her trainer take the lead on Chablis's development was an ideal situation.

“He is incredible with young horses – he schooled him over cross-country jumps, did all of the gymnastics the jumpers do, and he is really bold and brave for that reason,” said Tropin. “When I get young horses like that, I prefer to have Peter make them for me because he is such an amazing horseman.”

Chablis, the horse Tropin calls Shabby to keep him humble, is the most athletic hunter in the world according to his owner.

“Last week, I was schooling him over the gymnastics, and he does it better than some of my high amateur jumpers,” said Tropin. “He's so athletic and talented, I think if he retired from being a hunter he could be a grand prix horse.”

Tropin, who works full-time as an Economist, has been showing at Old Salem Farm since she was 13 and competed Chablis for the first time ever at the Spring Horse Shows in 2014.

“It’s the most beautiful horse show in the world,” she said. “It’s my favorite show, and I always make sure that I save vacation days so I can show at Old Salem.”

Laura Sexton and her own Set To Music jumped to reserve champion in the Amateur-Owner Hunter 18-35 Division. They earned a fifth and two second-place ribbons over fences before scoring second again in the handy round, as well as the under saddle, for reserve honors.

Penny Brennan (GBR) channeled her 12 years as a thoroughbred jockey to pilot her own Sun Tzu to beat a star-studded crowd in the $15,000 Old Salem Farm Speed Derby, presented by TownVibe, on Saturday. She and the Irish Sport Horse gelding cruised through fellow British native Richard Jeffery's course clear in a blistering 83.337 seconds for the win.

Brennan bested McLain Ward (USA) and his own Qantor des Etisses, who settled for second. Ward had the time across the course, but a rail in the faults-converted class settled him on a final time of 85.92 seconds. Mattias Tromp (USA) and KM Whatever RV, owned by Beyaert Farm, Inc. took third in 87.43 seconds, while Edward Levy (FRA) and Rose Hill Farm's Pauly du Breuil claimed fourth in 88.05 seconds. Kyle Timm (CAN) rounded out the top five on 89.012 seconds aboard Calida 55 for Apex Equestrian Center.

Brennan's win was a welcomed high point in an otherwise stressful journey. After her trailer broke down moments before unloading her horses at Old Salem Farm, a blue ribbon made her week a success despite setbacks. But for Brennan, the highlight was seeing her name on the leaderboard above those like Ward, who was leading the class for several trips until Brennan walked onto the Grand Prix Field.

Where other riders saw seven strides in the first line of the course, Brennan “hit the gas” and left out a stride, saving valuable time on the clock.

“Sun Tzu is just so game. It doesn’t matter if you are long or deep or if the jumps are on fire, he is going to try and win for you,” said Brennan. “I feel amazing right now. I needed it more than anything in the world.”

Brennan purchased Sun Tzu out of the child/adult jumper ring after spotting talent in the gelding. After Saturday's win, Brennan admits she will continue to compete Sun Tzu and see what else he has to show her.

“The sky’s the limit and if your dreams don’t scare you, they aren’t big enough,” she concluded.

Old Salem Farm will host the $50,000 Old Salem Farm CSI 2* Grand Prix, presented by The Kincade Group, on Sunday at 2 pm to highlight competition on the Grand Prix field, while Grand Pony, Children's, and Junior Hunter Champions will be crowned in the hunter rings. Meanwhile, family activities, including face painting and pony rides by Pied Piper, will begin at 11 am.