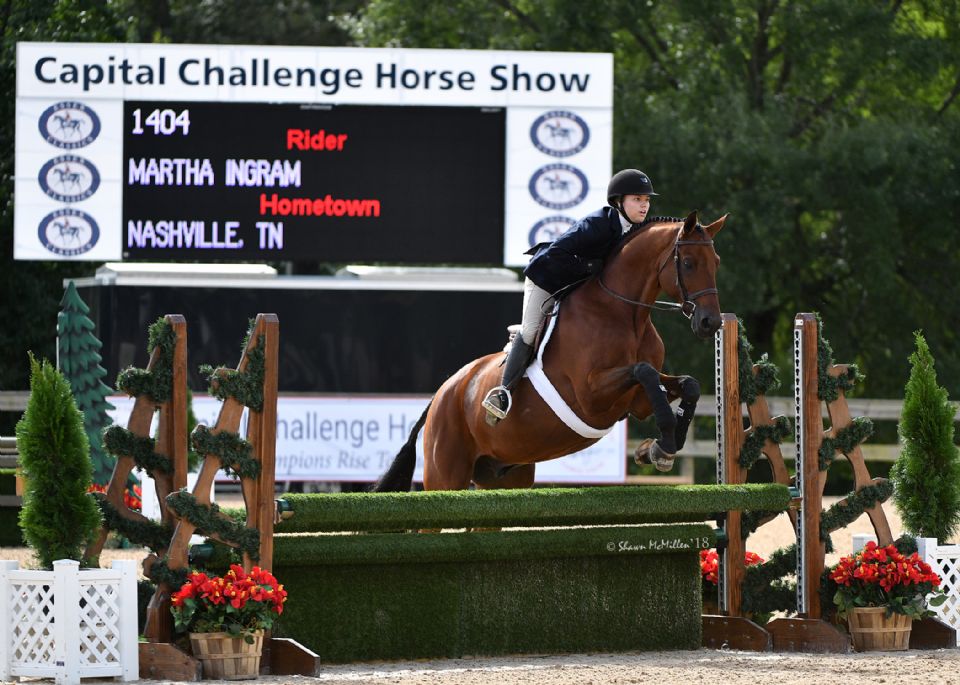 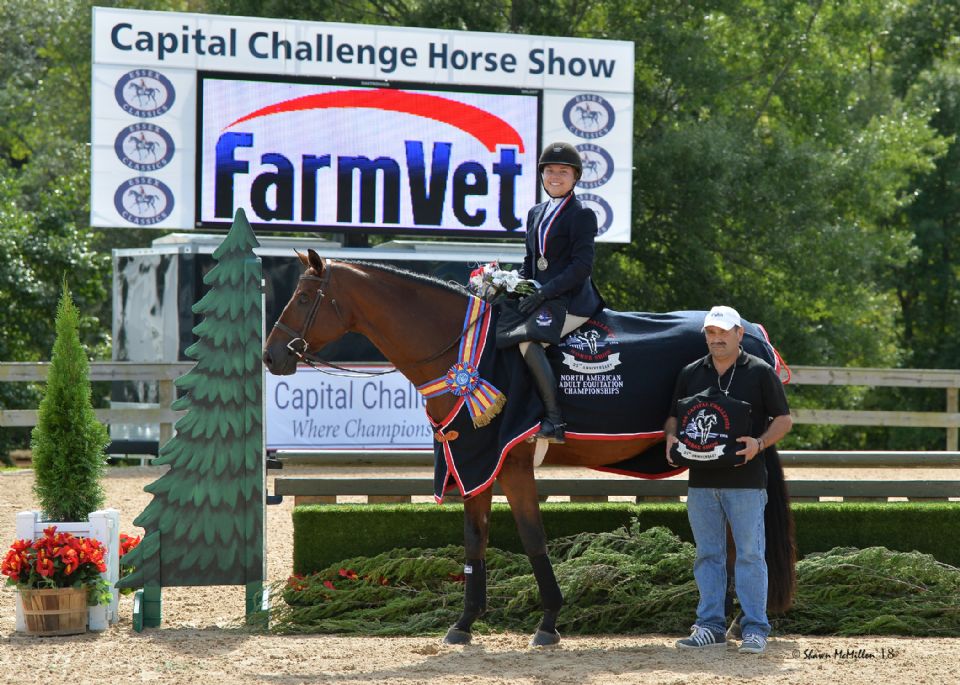 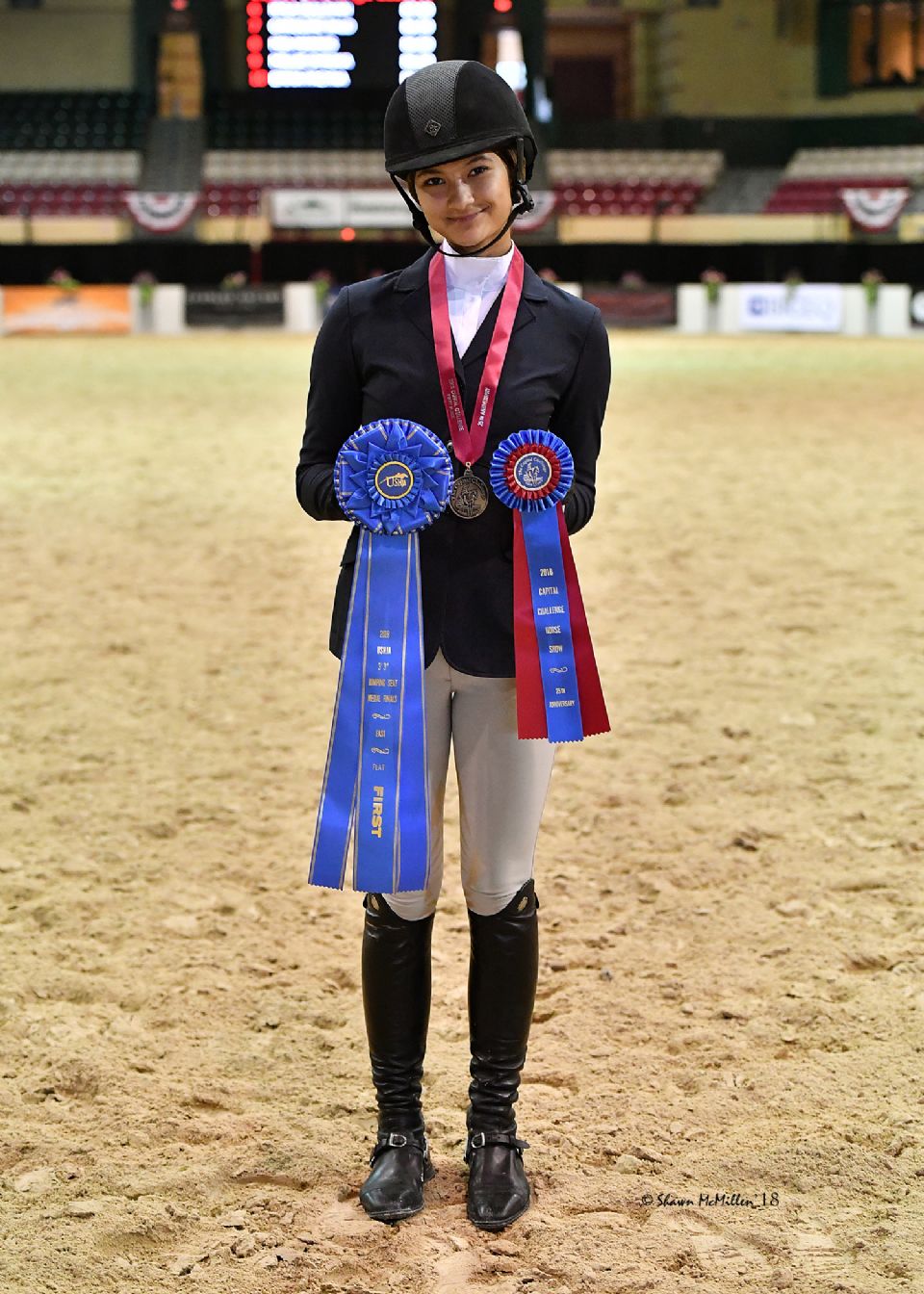 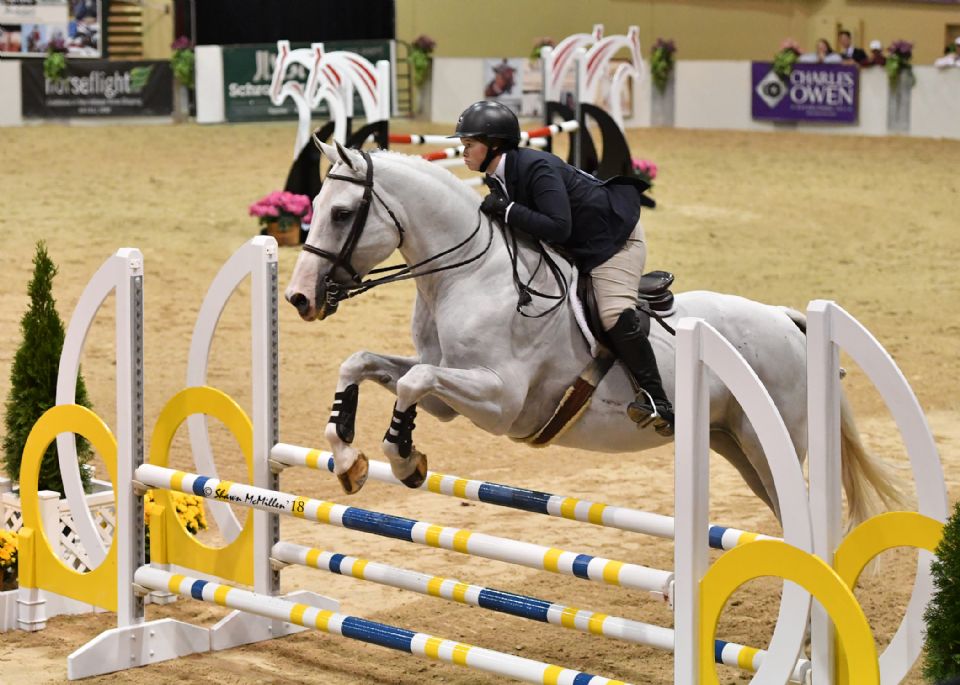 The 25th anniversary edition of the Capital Challenge Horse Show began on Friday, September 28, at the Prince George’s Equestrian Center in Upper Marlboro, MD, with the start of Equitation Weekend, presented by BigEq.com, and the naming of the show’s first three 2018 champions.

Ingram, 21, of Nashville, TN, made the trip from Furman University in South Carolina to Capital Challenge, just long enough to top the 26 total entries in the championship class.

“I actually skipped school today to be here, but I fly back tomorrow!” said Ingram, who is currently in her junior year. “This is my first time doing the amateur equitation here. I did the juniors; I did the Taylor Harris [National Children’s Medal Final]; I didn’t even make it to the second round in the Taylor Harris, so really coming here I just wanted to have a good time.”

Ingram sat in second place behind earlier Adult Amateur Equitation championship winner, Edgar, following the first two rounds of over fences competition, but she shot to the lead after a final test of the top three riders. With Ingram taking the victory, second place was awarded to Jacqueline Attwood-Dupont of Los Angeles, CA, and Edgar finished in third.

“It was just a really nice surprise,” said Ingram. “I was hoping to do well, but I wasn’t expecting anything. I was going in to have fun, so to come out on top is really nice.”

Ingram’s mount for the class was Airport 48, a 15-year-old Holsteiner gelding ridden to great success in the hunter ring by her father, John Ingram. And while Airport 48 is now known for his amateur hunter accolades, the horse was initially purchased more than six years ago to be Martha’s equitation mount, a role the gelding only now stepped into for the first time – and only temporarily.

“The horse I was going to do originally got hurt kind of last minute, so he was the backup,” explained Martha. “Since he was bought to be my equitation horse anyway, we thought, ‘Why don’t we do Airport?’ I’m really lucky that my dad let me show him. He’s like a dog. He just loves people and loves his job. He’s very smooth and comfortable; he really jumps nicely. He’s always there for you, so I’m really lucky.”

While Martha now returns to school for the beginning of the week, she’ll return to Capital Challenge next week to compete in the Amateur-Owner Hunters.

Leading the way going into the final jumping phase, to be held beginning Saturday afternoon, is Breanna Bunevacz of Calabasas, CA. The 15-year-old topped an immense field of 121 riders to win the morning’s flat phase aboard Acortair, her own 13-year-old gelding.

With so many entries in the increasingly popular class, riders were divided into 11 sections for judging on the flat, with one overall winner, Bunevacz, named at the conclusion of all 11 sections.

While Bunevacz is based in California where she is a freshman in high school, she made the decision to travel east this year for the USHJA 3’3” Jumping Seat Medal Final.

“I did it last year on the West Coast, and I decided to do the East Coast this year to try something different,” explained Bunevacz. “I always want to try and do something that I haven’t done before, and I feel like doing it here kind of put me out of my comfort zone which is really good.”

The win in the gymnastics phase with a score of 89 went to Abbygale Funk of St. George, KS.

“This is an extreme surprise!” said Funk who trains with her mother, Mary Ann Thomas out of Ashwood Farm, as well as Andre Dignelli and Patricia Griffith at Heritage Farm. “Normally I don’t do very well in the equitation, so it was an extreme surprise to do that well out of that many people.”

“It was very tough; my horse made it super, super easy for me, but it was definitely a really hard course,” said Funk, who rode Santa Rosa Camelot, an 11-year-old Warmblood gelding owned by Ashwood Farm. “The hardest for me was when we did the six-stride to the one-stride and then halted and turned back around and jumped it again but had to do it in one to a five-stride instead. You had to go away from the gate, leave the stride out, and the five was very long.”

Funk will join the 121 entries in returning for Saturday’s final jumping phase beginning at approximately 3:30 p.m.

Competition at the Capital Challenge Horse Show continues on Saturday beginning at 7:15 a.m. with the age group equitation divisions and culminating for the day with the USHJA 3’3” Jumping Seat Medal Final in the Show Place Arena.