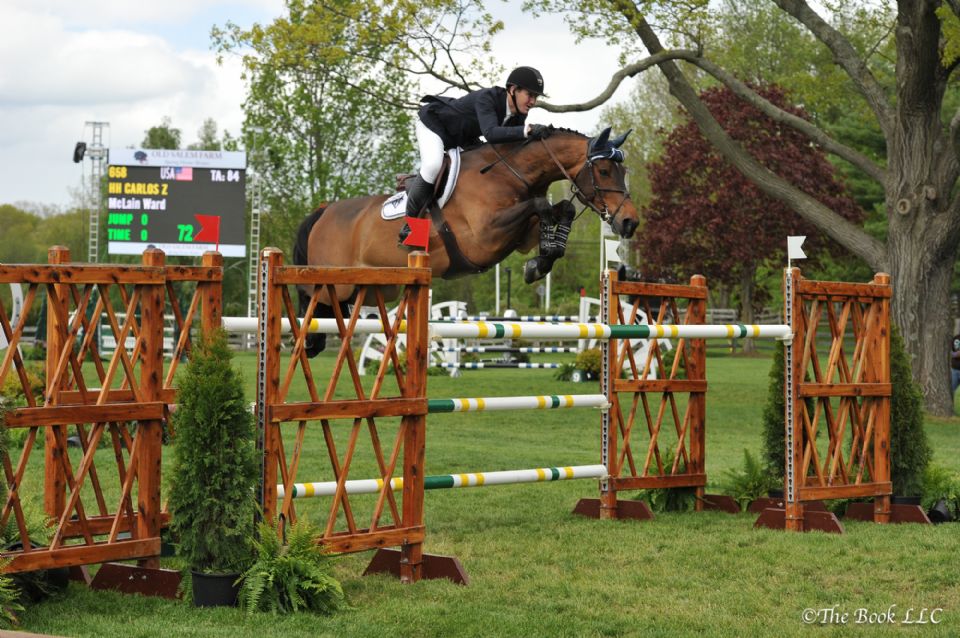 McLain Ward and HH Carlos Z.
Photo by The Book 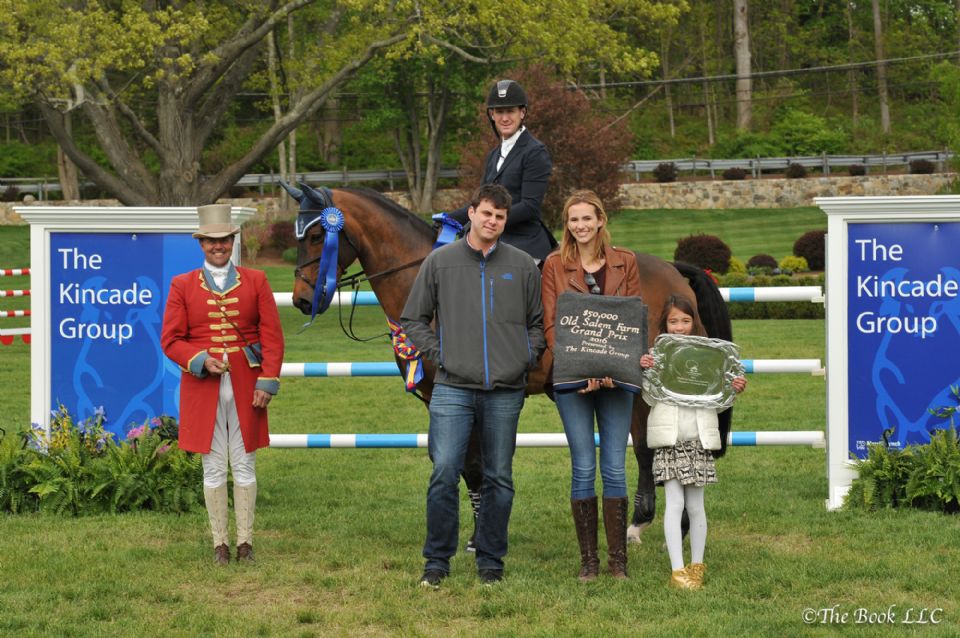 McLain Ward and HH Carlos Z in their winner's presentation with ringmaster Alan Keeley, as well as Brian and Gretchen Kincade and Ella Kwon, representing The Kincade Group.
Photo by The Book 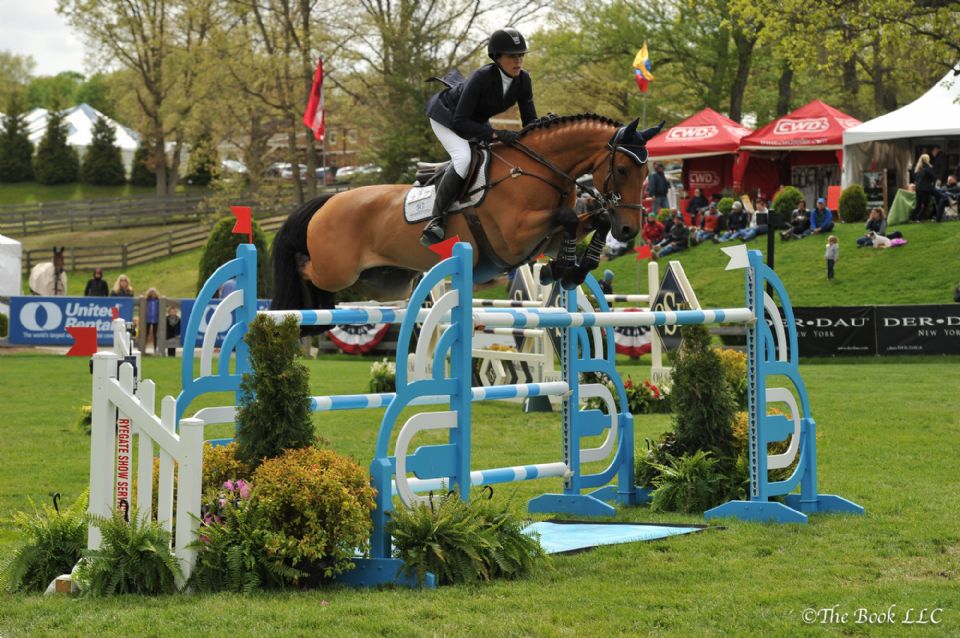 Brianne Goutal and Zernike K.
Photo by The Book 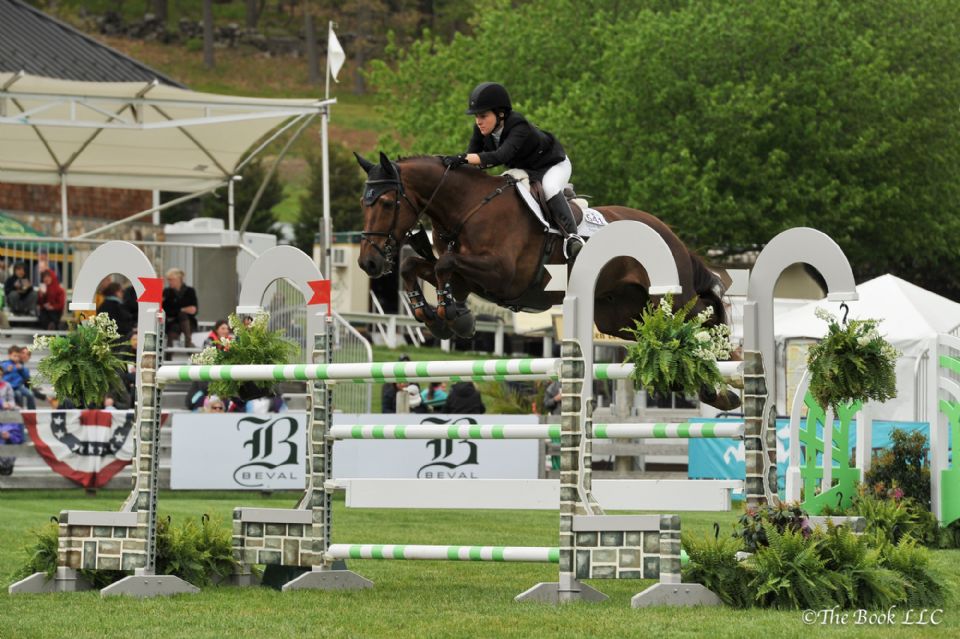 Katie Dinan and Dougie Douglas.
Photo by The Book 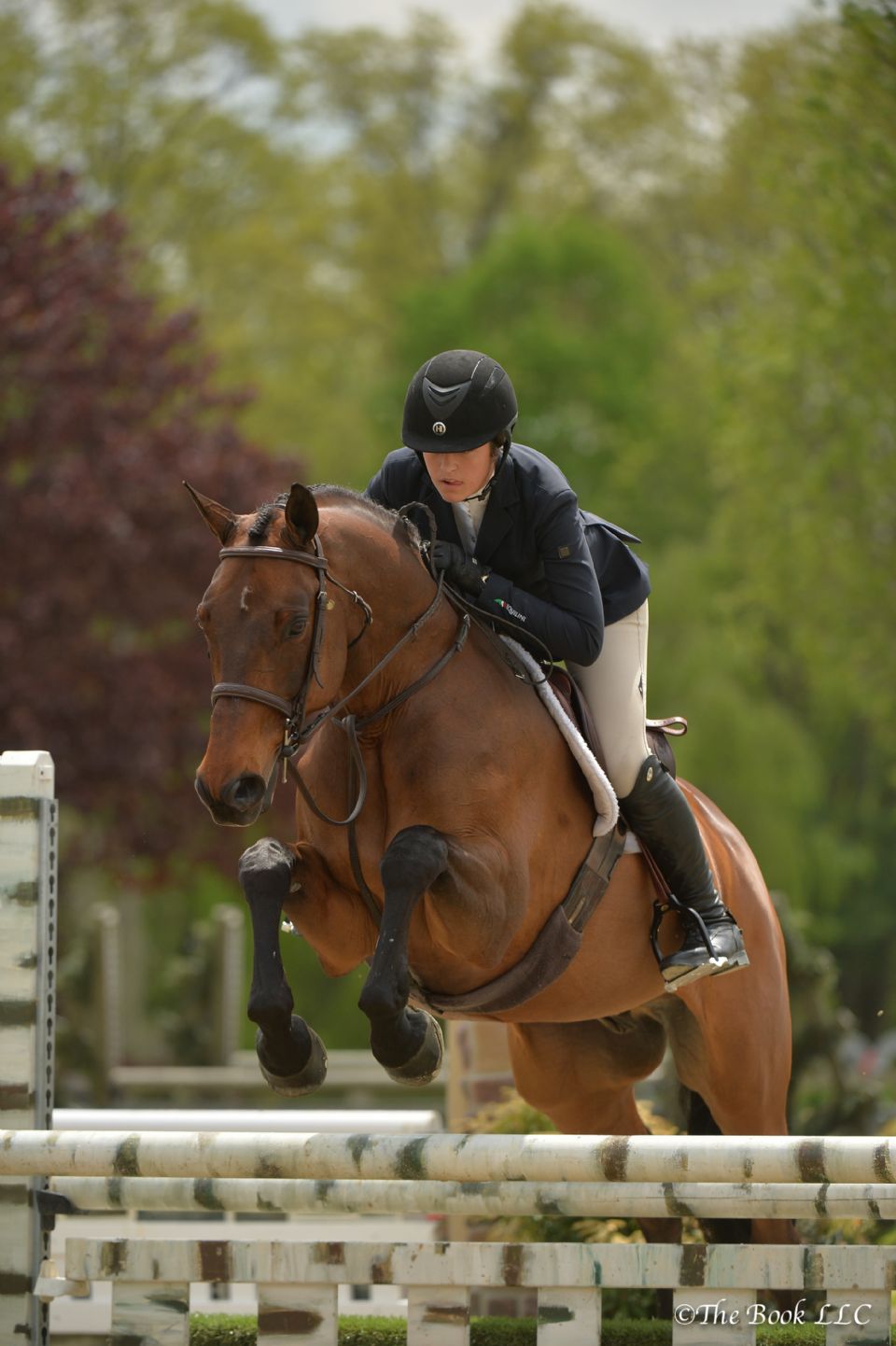 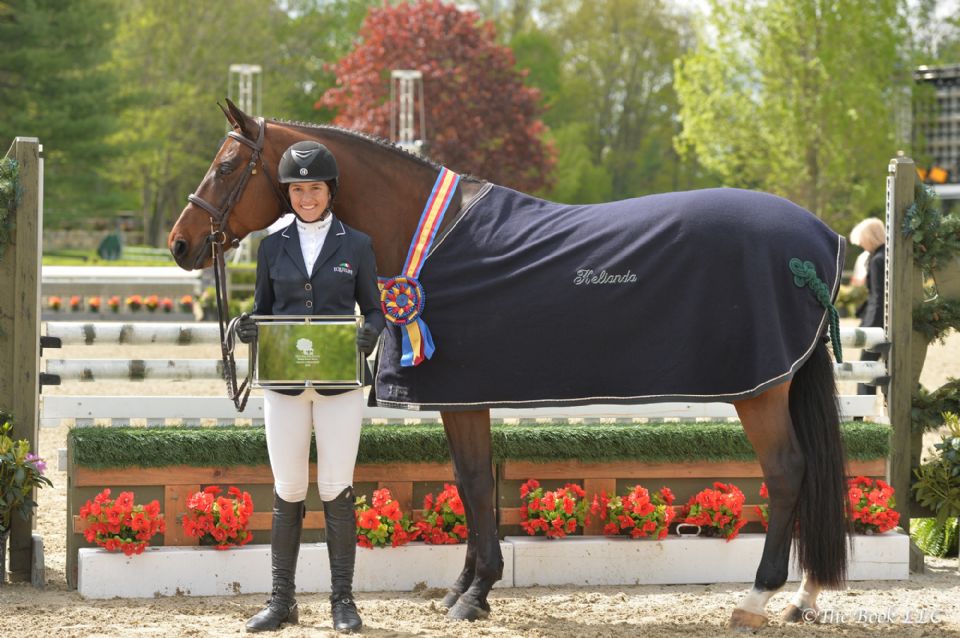 McKayla Langmeier and Czar-Z in their winner's presentation.
Photo by The Book

Ward and HH Carlos Z, a proven winning combination for Double H Farm, topped a field of 36 over tracks built by Richard Jeffery of Great Britain. Ward and his 14-year-old Zangersheide gelding batted cleanup in a five-horse jump-off to secure his second consecutive Week 1 Grand Prix victory at the Old Salem Farm Spring Horse Shows after leading the victory gallop in 2015 on HH Azur.

Fellow Double H Farm rider Quentin Judge (USA) was first to return for Sunday's jump-off in the irons of HH Whisky Royale. Two rails gave them eight faults in 43.04 seconds for fifth place. Peter Lutz (USA) returned next with Robin de Ponthual for owners Katherine Gallagher & Michael Meller, but they pulled one rail to land them with four faults in 40.08 seconds for fourth place.

Katie Dinan (USA) and Dougie Douglas were first to give the crowd a cheer-worthy clear round in 41.31 seconds. Their lead was short-lived, however, as Brianne Goutal (USA) returned next on Zernike K and broke the tape in 39.40 seconds. Ward and HH Carlos Z were the final pair on course and broke the timer beam in 38.70 seconds for the win. Goutal took second for Remarkable Farms, LLC and Dinan slid to third for Grant Road Partners, LLC.

Ward was happy to have HH Carlos Z's experience on his side over the “tricky” course.

“It is nice to have a horse like Carlos who is very predictable,” he said. “I think the younger horses found it harder to pass a few of the tests, but you know when you have a horse like I do, you don’t have to worry about the natural fences or his balance. It really makes things a lot easier.”

HH Carlos Z has pocketed wins all over the world for Ward, but especially strives on the grass Grand Prix Field at Old Salem Farm.

“It's always a little surprising to me because he is a super careful, small horse, and you would lean toward thinking that a horse like that would like a small sand arena better, but he really grows in these big fields,” said Ward.

Goutal made a strong bid for the win, but was pleased with second place. “I don’t like to be beaten, but I am glad that it was McLain who beat me,” she said.

Goutal was most pleased to see Old Salem Farm offer two weeks of FEI-sanctioned competition during the 2016 season. Announced earlier this year, the Old Salem Farm Spring Horse Shows will host a 3* grand prix next Sunday, May 22, after this weekend's 2* event.

“I have been commenting for a while now about how there should be more FEI shows [in the U.S.],” said Goutal. “I was really happy to see that there are a lot this summer, and I am going to take advantage of that. I also have a lot of students who want to show locally, so we are going to caravan around America a little bit. I haven’t done that in six years, so I am super excited to jump in all those classes.”

Ward, who considers the Old Salem Farm Spring Horse Shows to be his hometown show and is a familiar face at the two-week event, echoed Goutal's thoughts on bringing more international-level competition to North America.

“It's great to see them thinking big, and I try to support shows in America that are making that effort,” he said. “We are very proud of how [Old Salem] has grown and the efforts of Allen Bietsch and everybody involved who have made this facility world-class and a home of FEI-level events.”

For Dinan, Sunday's finish was her best of the week in FEI competition, and she was quick to give credit to her mount, Dougie Douglas.

“I was very happy with my horse – he thrives in these big grass fields,” said Dinan. “He grew up in Ireland and England and has a lot of experience, and that makes the job for the rider a lot easier. I am very lucky to have him, and I just try to do the best I can every ride.”

Hailing from New York, NY, and a regular competitor at Old Salem Farm, Dinan will miss the second week of the Spring Horse Shows to graduate from Harvard University with a degree in Human Developmental and Regenerative Biology. Her college career will conclude on May 26 and full-time riding will commence.

“I am looking forward to the next chapter in my life,” she said. “I will be in Europe all summer and then pick up from there.”

McKayla Langmeier, 15, and Linda Langmeier's Czar-Z collected first and second place ribbons in the Small Junior Hunter Division before winning the handy on Sunday to clinch Grand Junior Hunter Championship. Langmeier and Czar-Z have been together since he was five. Now 13, she and the Warmblood gelding have an instant connection in the show ring.

“I know him really well – we basically grew up together,” she said. “He's that one special horse you always have that you can count on to win a blue ribbon.”

An uncomplicated ride, according to Langmeier, Czar-Z is just getting back into competition after have the winter off from showing. He did not travel to Florida with the rest of Langmeier's string and enjoyed a few months rest before starting back fresh a few weeks ago.

“This is his second show back, and he was really great,” said Langmeier. “He is so simple. I don't even ride him with reins or leg, he just goes around.”

Langmeier's performance on Czar-Z, the horse she calls “The Prince” because of his presence both in and out of the ring, also secured her place as winner of the Best Junior Rider on a Horse Award.

“I was getting ready for my jump-off in on the [Grand Prix] Field, and I went to go accept the award,” she said. “I was so shocked. I had no idea that was going to happen today.”

With horses in the hunter, jumper, and equitation rings, Langmeier has perfected the art of switching gears.

“It took me a long time to be able to change modes from the hunter ring to the jumpers, but I am getting better at switching my mindset in the different rings,” said Langmeier.

Coco Fath and Akinda, owned by Hillside Farm, LLC, were pinned Reserve Champion in the Small Junior Hunter Division. They jumped to first, second, and third over fences before placing third in the handy and winning under saddle.

The Old Salem Farm Spring Horse Shows offer more than $500,000 in divisions ranging from ponies and equitation to Under 25 and top FEI competition. General admission to Old Salem Farm is free Wednesday through Friday during the Spring Horse Shows. During the weekend of May 20-22, which features the $130,000 Empire State CSI 3* Grand Prix, presented by The Kincade Group, on Sunday, May 22, admission is $15 for adults and $10 for seniors and children under 12. To purchase tickets for all show jumping events at the Spring Horse Shows, CLICK HERE.