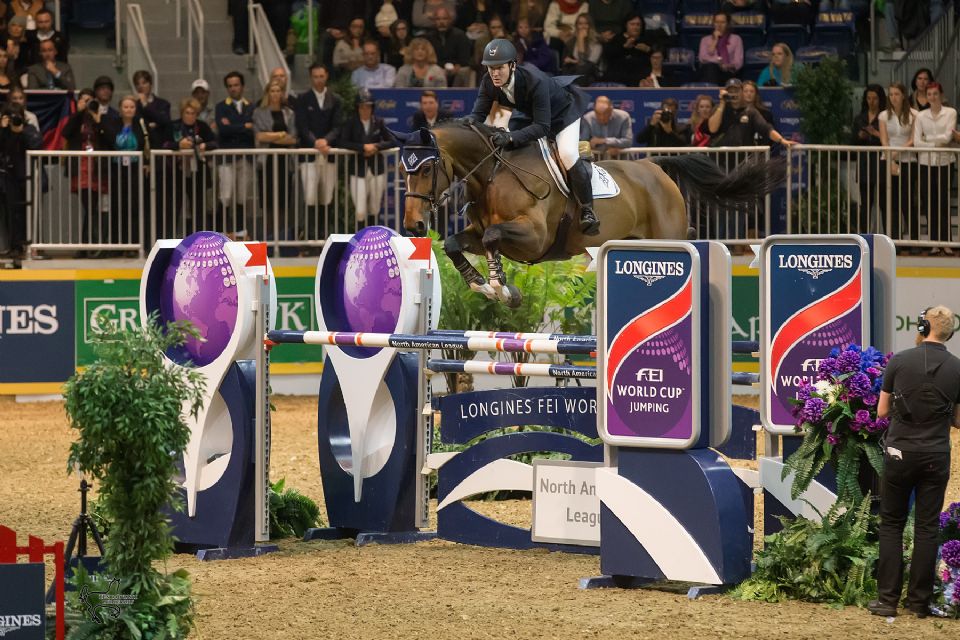 Mclain Ward of the United States and HH Azur jumped to victory in the $132,000 Longines FEI World Cup™ Jumping Toronto on Wednesday, November 11 at the Royal Horse Show®.
Photo by Ben Radvanyi Photography 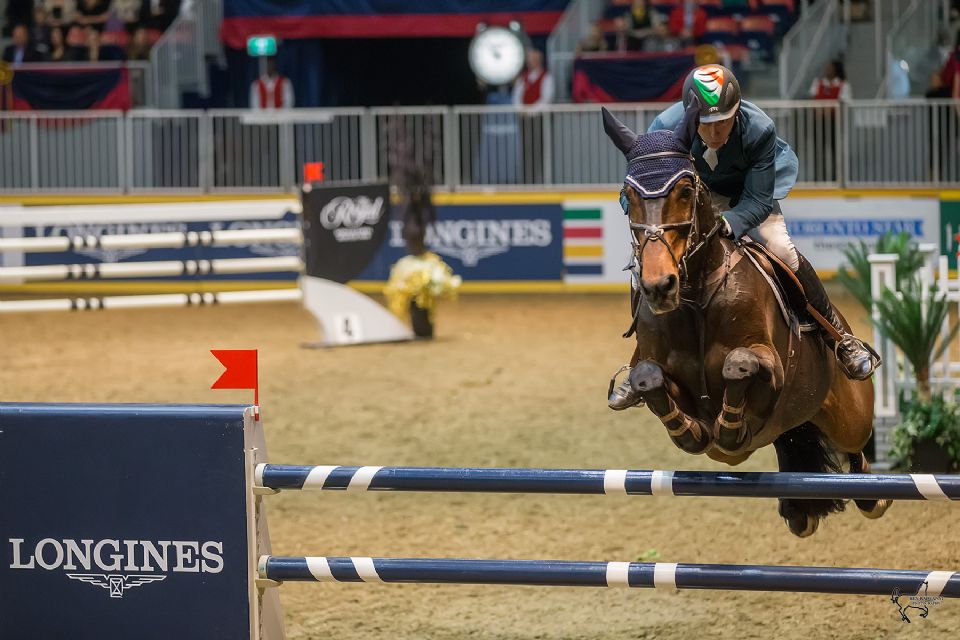 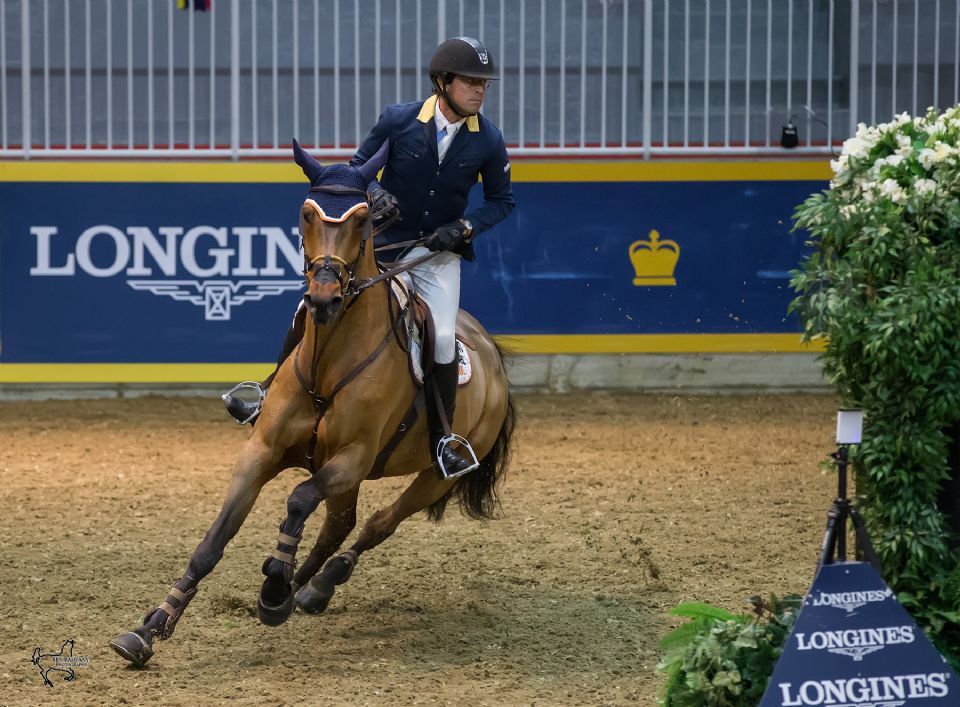 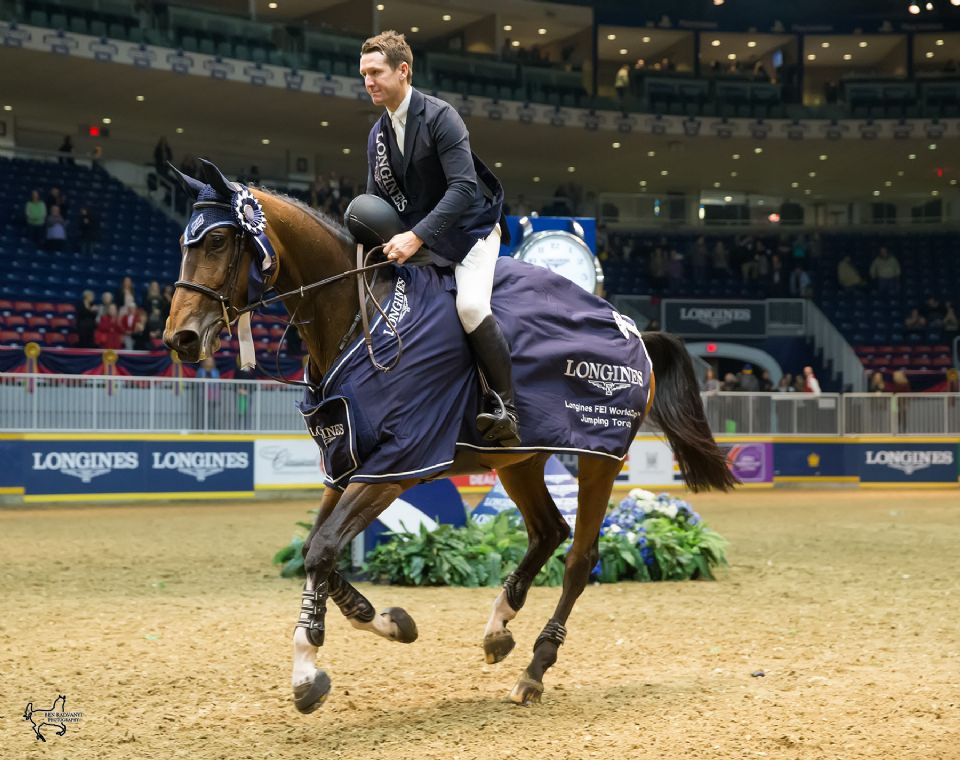 Mclain Ward of the United States scored his third consecutive victory in the $132,000 Longines FEI World Cup™ Jumping Toronto on Wednesday, November 11, at the Royal Horse Show®, held as part of The Royal Agricultural Winter Fair in downtown Toronto, ON.

Ward of Brewster, NY, topped a two-horse jump-off to claim victory in the Royal Horse Show’s World Cup qualifier for a record seventh time. After winning at The Royal in 2013 and 2014, Ward made it three in a row, taking the $132,000 Longines FEI World Cup™ Jumping Toronto in front of a packed house in the Ricoh Coliseum.

“My father competed at The Royal for a number of years and now, for my daughter to come here and be a part of this, it’s very special,” said Ward, 40, whose nine-month-old daughter Lilly was in the audience. “I love it here.”

Lennon and Loughview Lou Lou returned first over the shorten jump-off course, but clipped two rails for eight faults in a time of 42.04 seconds. With the door left wide open, Ward opted for a conservative clear, picking up one time fault in the process to finish in 47.58 seconds.

Despite setting a tough track that he described as “big” with no verticals set lower than 1.60m, course designer Jeffery was pleased with the outcome.

“Every fence came down at least once and I was happy with the result,” he said. “I wanted it to be a real World Cup class, and I built for that. Mclain showed us tonight with that horse what a future the sport has.”

“The horse traveled well and jumped well tonight, so I am happy,” said the 2002 World Champion about the mare that shipped from Europe to Toronto to compete at the Royal Horse Show. “It was a difficult course for her and she gave a lot in the first round. She’s not the easiest ride, but she’s very competitive and always wants to try.”

Three mares dominated the top spots with Roberto Teran of Colombia posting the fastest four-fault effort in the first round riding Woklahoma to finish third for owners ARK Partners, LLC.

“Toronto is like my second hometown,” said Teran, 38, who is based in Burlington, ON, during the summer season. “I always want to come here because I think it is super special. Today was a little unlucky, but I am happy with the result. Looking back, I would have pulled a little harder for that vertical and been in the jump-off!”

“It’s a bit of a dream,” said Ward, who won back-to-back Olympic team gold medals in 2004 and 2008. “I would say she’s the horse of a lifetime if I hadn’t had Sapphire. To get a second one like this is pretty incredible, and I hope I do her justice and manage her well. Every time the horse goes in the ring she’s better, higher, faster. The only time she has a fence down is if I have a terrible error.”

Ward explained that when he began riding HH Azur this winter, he quickly realized that she could be his mount for the 2016 Rio Olympics.

“We knew after Florida that she was everything we thought she was, and she’s only gotten better this summer,” he said. “Everything she does now will be working backwards from Rio.”

Wednesday evening’s event marked the inclusion of the Royal Horse Show as one of only four Canadian events to be selected for the newly-formed Longines FEI World Cup™ Jumping North American League. The class offered valuable points towards qualifying for the 2016 Longines FEI World Cup™ Final to be held from March 23 to 28 in Gothenburg, Sweden.

“We are honoured to have these riders put on such a great show for us here tonight,” he continued. “What has surprised me the most is the emotional connection that people have with The Royal. The commitment to continue that really is something special.”