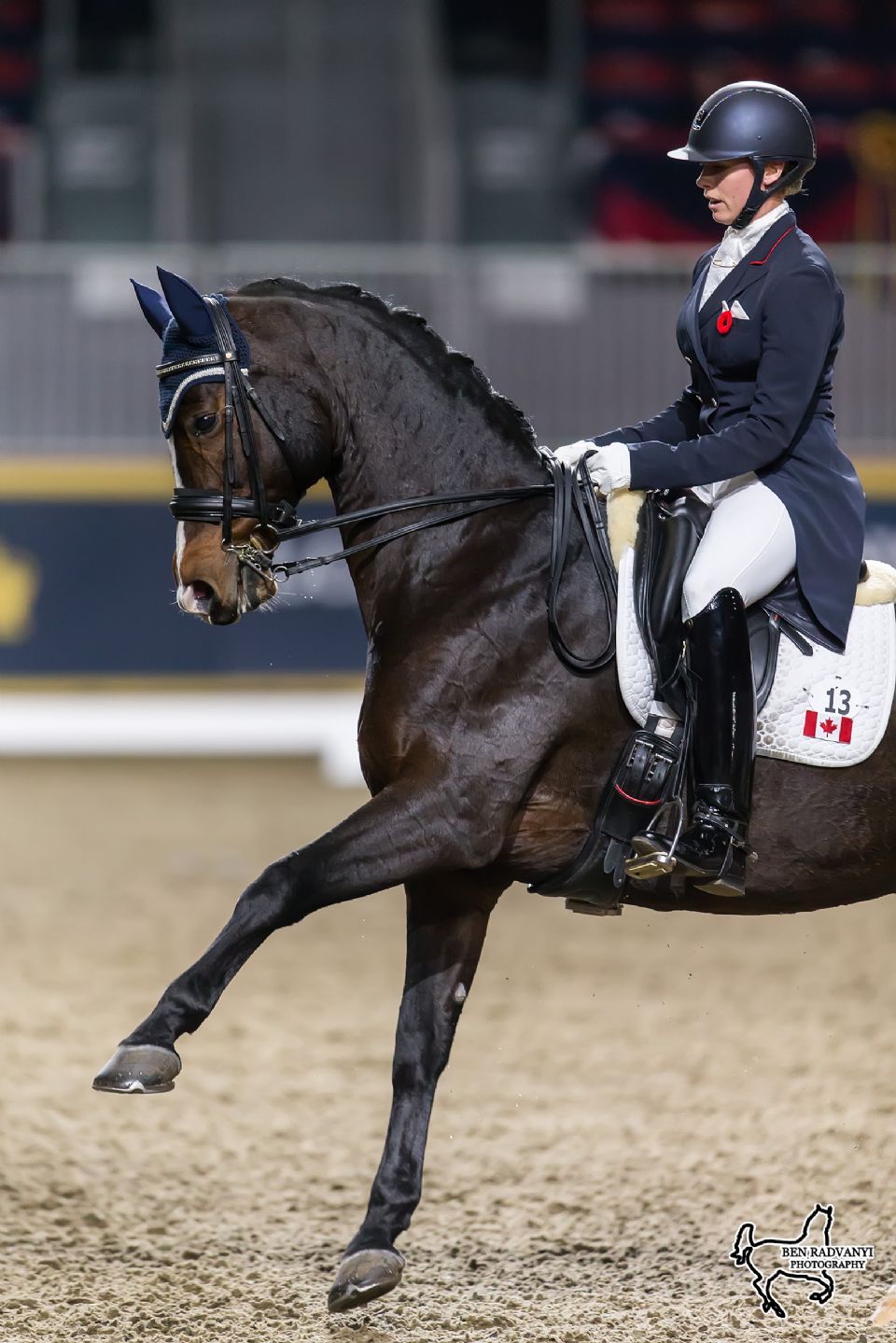 Canadian Olympian Megan Lane of Collingwood, ON, and Caravella won the $20,000 Royal Invitational Dressage Cup, presented by Butternut Ridge, for the second year in a row on Thursday, November 9, at the Royal Horse Show in Toronto, ON.
Photo by Ben Radvanyi Photography 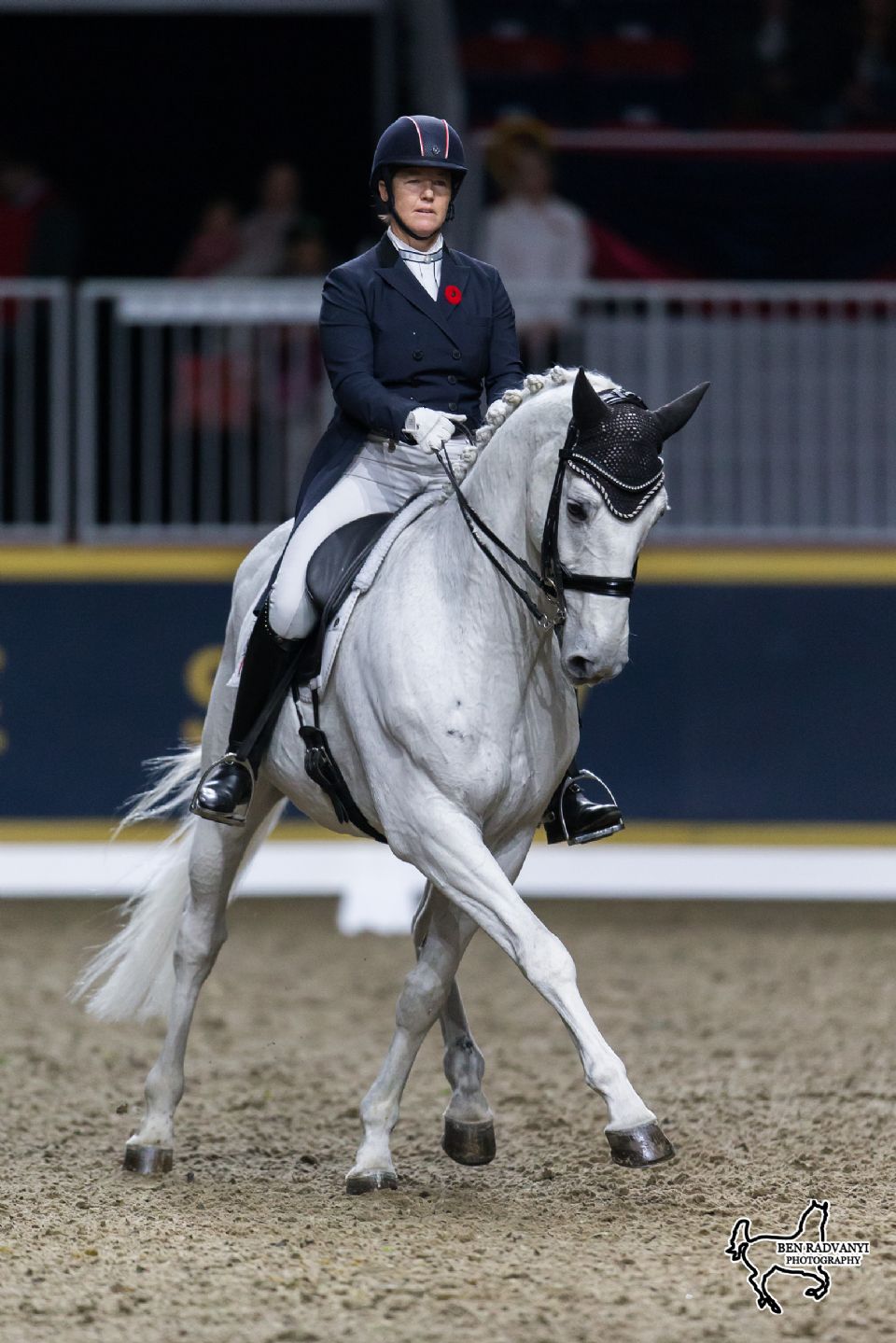 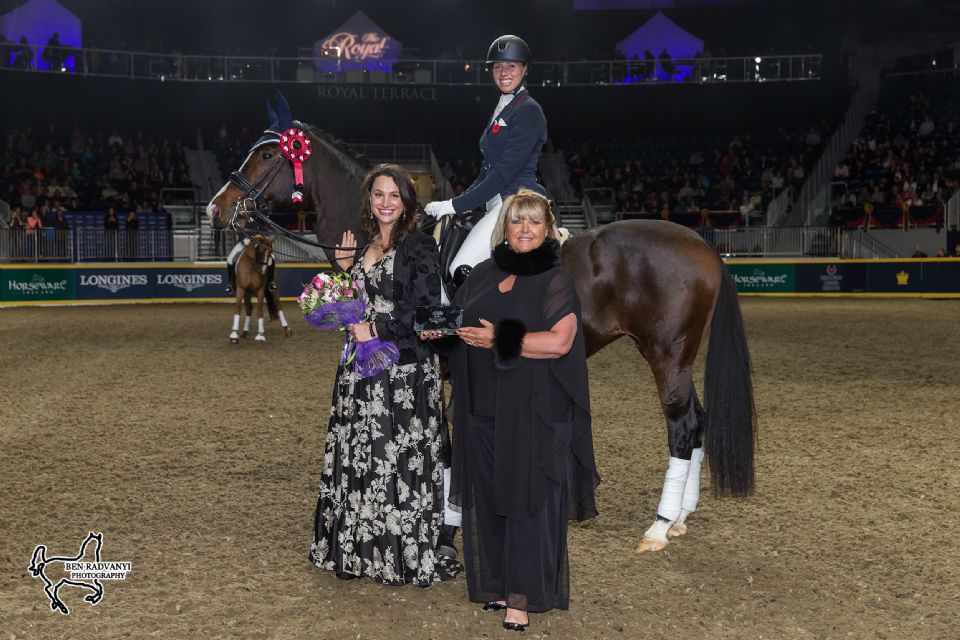 Megan Lane aboard Caravella was presented with the Butternut Ridge Trophy by Emily Hill (left) and Deborah Kinzinger Miculinic as the overall winner of the $20,000 Royal Invitational Dressage at the Royal Horse Show in Toronto, ON.
Photo by Ben Radvanyi Photography

Canadian Olympian Megan Lane of Collingwood, ON, won the $20,000 Royal Invitational Dressage Cup, presented by Butternut Ridge, for the second year in a row on Thursday, November 9, at the Royal Horse Show in Toronto, ON.

Lane and her long-time mount, Caravella, defended their title by performing the same freestyle routine that earned them the Royal Invitational Dressage Cup victory in 2016.  Athletes choreograph required movements to the music of their choice in freestyle competition, with Lane’s program being an original composition by Dutch freestyle designer, Joost Peters.

The pair’s execution of the freestyle, highlighted by difficult one and two-tempi changes and crowd-pleasing one-handed pirouettes, earned Lane and Caravella a score of 73.708% from the international panel of judges and the win in the Dressage Invitational Grand Prix Freestyle.

“It’s a tricky choreography, and Caravella was great!” said Lane, who is now two for two, having only competed at the Royal Horse Show twice in her burgeoning career. “It’s an incredible honour to be here at the Royal Horse Show.  I love it here.  The Canadian crowds are great to ride for; they’re very supportive, yet respectful, of dressage.”

Lane, 26, has been competing Caravella since her junior years, and together she and the 16-year-old Canadian-bred mare have represented their country on some of the world’s biggest stages, including the 2016 Rio Olympic Games, the 2015 Pan American Games where they were members of Canada’s silver medal team, and the 2014 World Equestrian Games in Normandy, France.

“It’s been almost half of my life now that I’ve been riding Caravella,” said Lane, who rides and trains alongside six-time Canadian Olympian Christilot Boylen at Deer Ridge Equestrian in Loretto, ON.  “Caravella and I grew up together.  I didn’t know what I had when I first got her!”

Having also won Wednesday’s Dressage Invitational Grand Prix test with a score of 68.833%, Lane was presented with the Butternut Ridge Trophy as the overall winner of the $20,000 Royal Invitational Dressage Cup, generously sponsored by Deborah Kinzinger Miculinic.

Finishing second in the Grand Prix Freestyle was Jacqueline Brooks of Mount Albert, ON, who earned a score of 72.208% aboard her 2012 London Olympic mount, D Niro, owned by Brookhaven Dressage Inc.  Rounding out the top three with a score of 67.000% was two-time Pan American Games veteran Esther Mortimer of Guatemala aboard Diamond Geezer, while fourth place went to Eiren Crawford of Lake County, BC, who earned a score of 66.542% in her Royal Horse Show debut riding Warello.