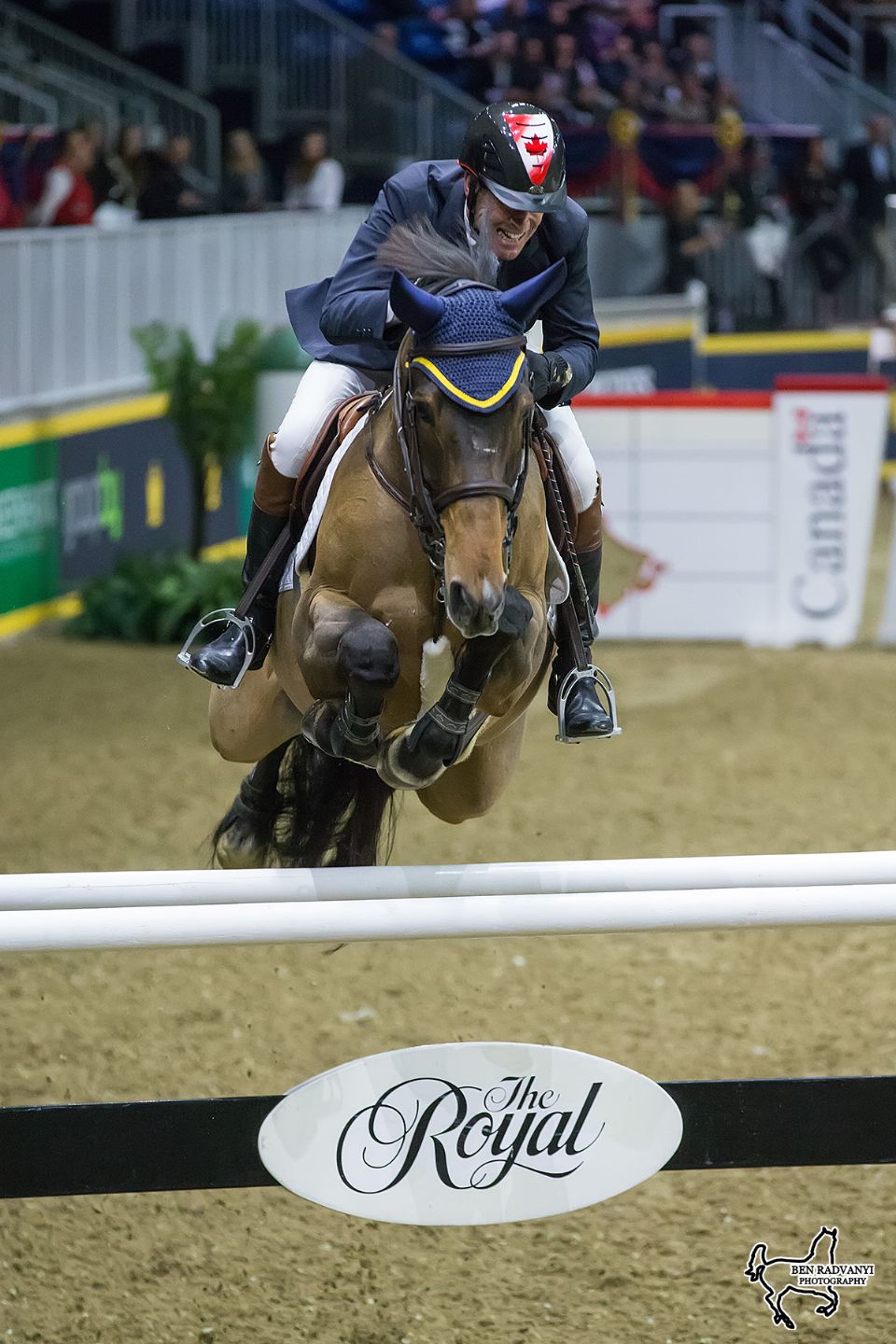 Ian Millar of Perth, ON, riding Dixson is on track to win his record 12th Greenhawk Canadian Show Jumping Champion following the opening round of competition on Friday, November 4, at the Royal Horse Show in Toronto, ON.
Photo by Ben Radvanyi Photography 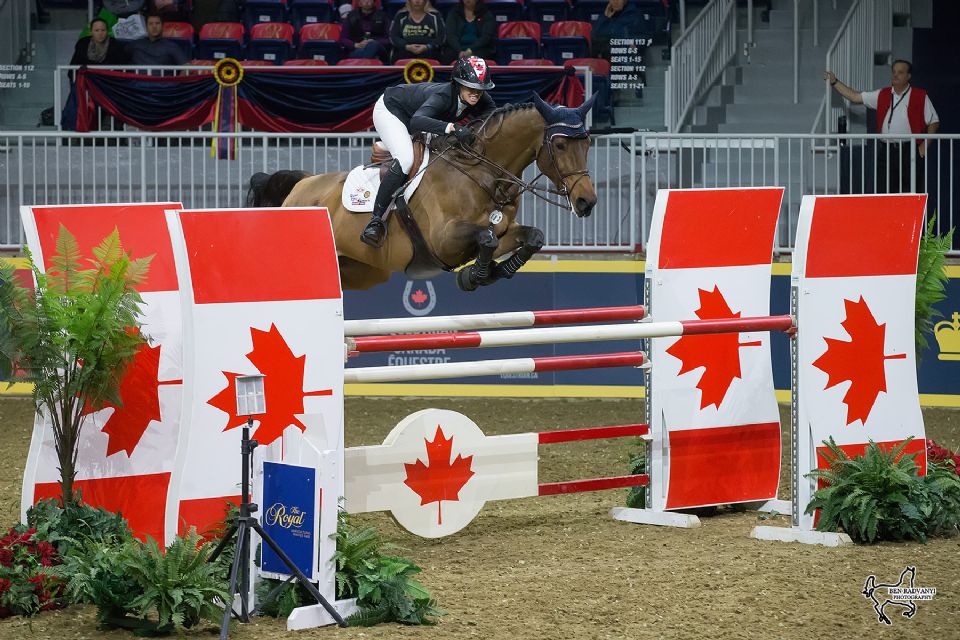 2016 Canadian Olympian Amy Millar of Perth, ON, and Heros placed second in the opening round of the $100,000 Greenhawk Canadian Show Jumping Championship on Friday, November 4, at the Royal Horse Show.
Photo by Ben Radvanyi Photography 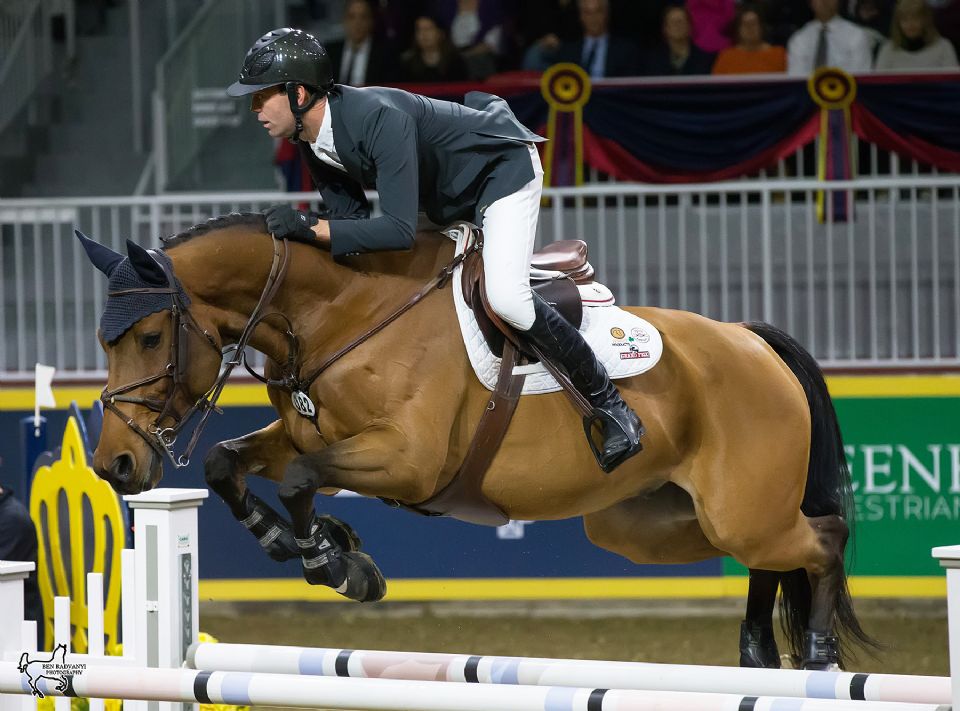 Jonathon Millar of Perth, ON, rode Bonzay to third place in the opening round of the $100,000 Greenhawk Canadian Show Jumping Championship on Friday, November 4, at Toronto’s Royal Horse Show.
Photo by Ben Radvanyi Photography

Ten-time Canadian Olympian Ian Millar of Perth, ON, won the first round of competition in the $100,000 Greenhawk Canadian Show Jumping Championship on opening night of the Royal Horse Show, held November 4-13, 2016, as part of the 94th Royal Agricultural Winter Fair in Toronto, ON.

Hot on his heels were his two children, Amy and Jonathon, who placed second and third respectively.  For the elder Millar, the only thing better than winning was seeing his family dominate the first of two phases of competition comprising the $100,000 Greenhawk Canadian Show Jumping Championship.

“I am most pleased about second and third,” said Ian Millar in reaction to his daughter and son finishing immediately behind him in the standings.  “They really did a great job.  Most every country has a national championship, and it's always a matter of great pride for the rider that wins it.  We're a competitive group, and part of what makes us good at what we do is being pushed by the others.”

Ian Millar has won the Canadian Show Jumping Championship a record 11 times and is on track to make it 12 after clinching Friday night’s speed round riding Dixson, owned by Susan and Ariel Grange of Cheltenham, ON.  Dixson has recently returning to competition following a sinus surgery that prevented a 2016 Rio Olympic appearance in August.

“I am thrilled to have Dixson back,” said Millar of the 13-year-old Belgian Warmblood gelding.  “I have never ridden him indoors before; his last competitions were always September and then he was off again until January.  A good horse is a good horse, and they just find a way to succeed.  Everything about my round tonight wasn’t perfect, but he fought the good fight and made it happen anyway.  That’s what the winners do, and he is a solid winner.”

Speed was top priority in Friday’s class with Millar and Dixson making quick and tidy turns over a track built by course designer Bernardo Cabral of Portugal to cross the timers in 59.41 seconds.  Riders will carry their scores forward to the second and final phase of Canadian Championship competition on Saturday, November 5.

“This first speed class at the Royal Agricultural Winter Fair is a tough one because it's the first time in the ring for the horses,” said Millar, 69.  “You have to come right out of the gate and go, do the inside turns, and take the chances.  You had to take some risks and the top group did it.  It was a very competitive competition.”

The top three placings stayed within the Millar family with Amy Millar, 39, of Perth, ON, taking second aboard her 2016 Olympic mount Heros, owned by AMMO Investments.  They posted a time of 60.25 seconds from the second-to-last position in the starting order, which ultimately bumped her older brother, Jonathan Millar, 42, also of Perth, ON, into third riding Bonzay, owned by Isotropic Networks, who was just fractions slower in 60.33 seconds.

Keean White of Rockwood, ON, riding For Freedom Z, owned by Angelstone Partners, posted a fast round as the second pair to face the track, with their time of 60.59 seconds settling them in fourth place.  Last year’s Reserve Canadian Champion, Mac Cone of King City, ON, riding Gasper van den Doorn for owner Chadburn Holdings, Inc., rounded out the top five with a time of 62.87 seconds.

All five riders will be looking to maintain their form heading into Saturday’s two-round final.  As defending champion Jill Henselwood of Oxford Mills, ON, is not competing at this year’s Royal Horse Show, a new Canadian Show Jumping Champion will be crowned.