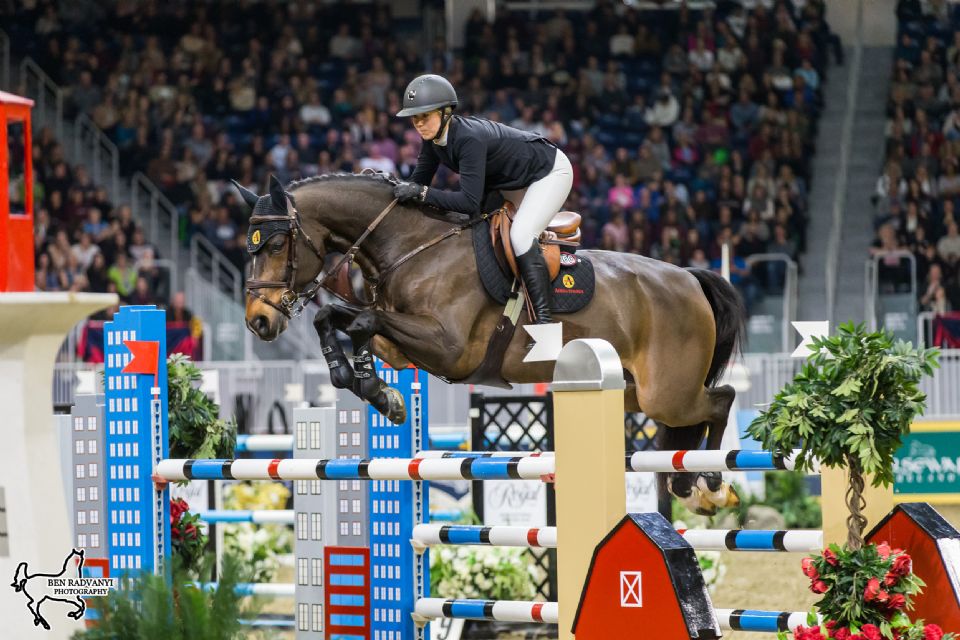 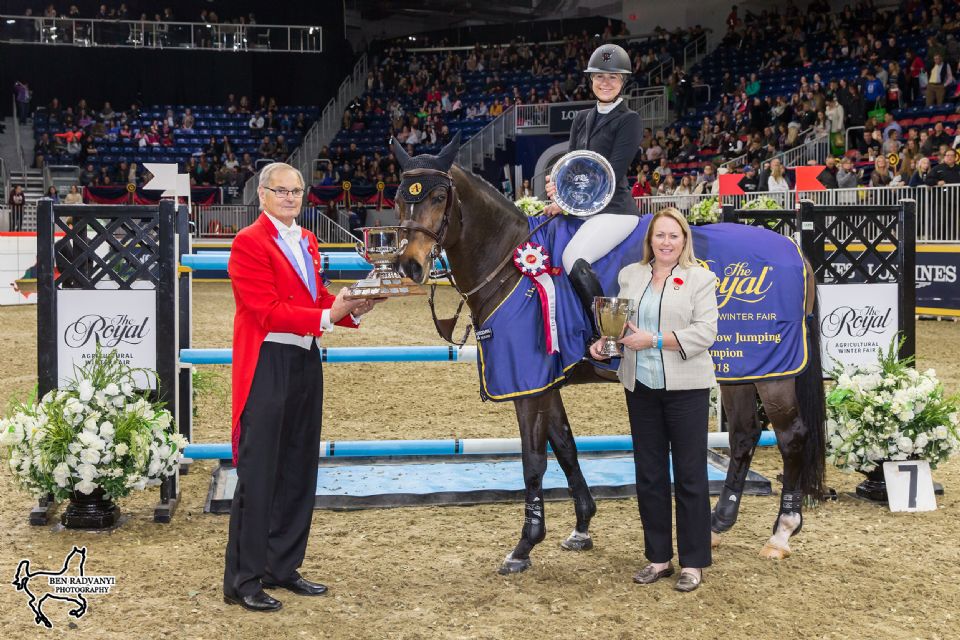 Nicole Walker of Aurora, ON, aboard Falco van Spieveld is presented as the Canadian Show Jumping Championship by Karen Hendry-Ouellette of Equestrian Canada.
Photo by Ben Radvanyi Photography 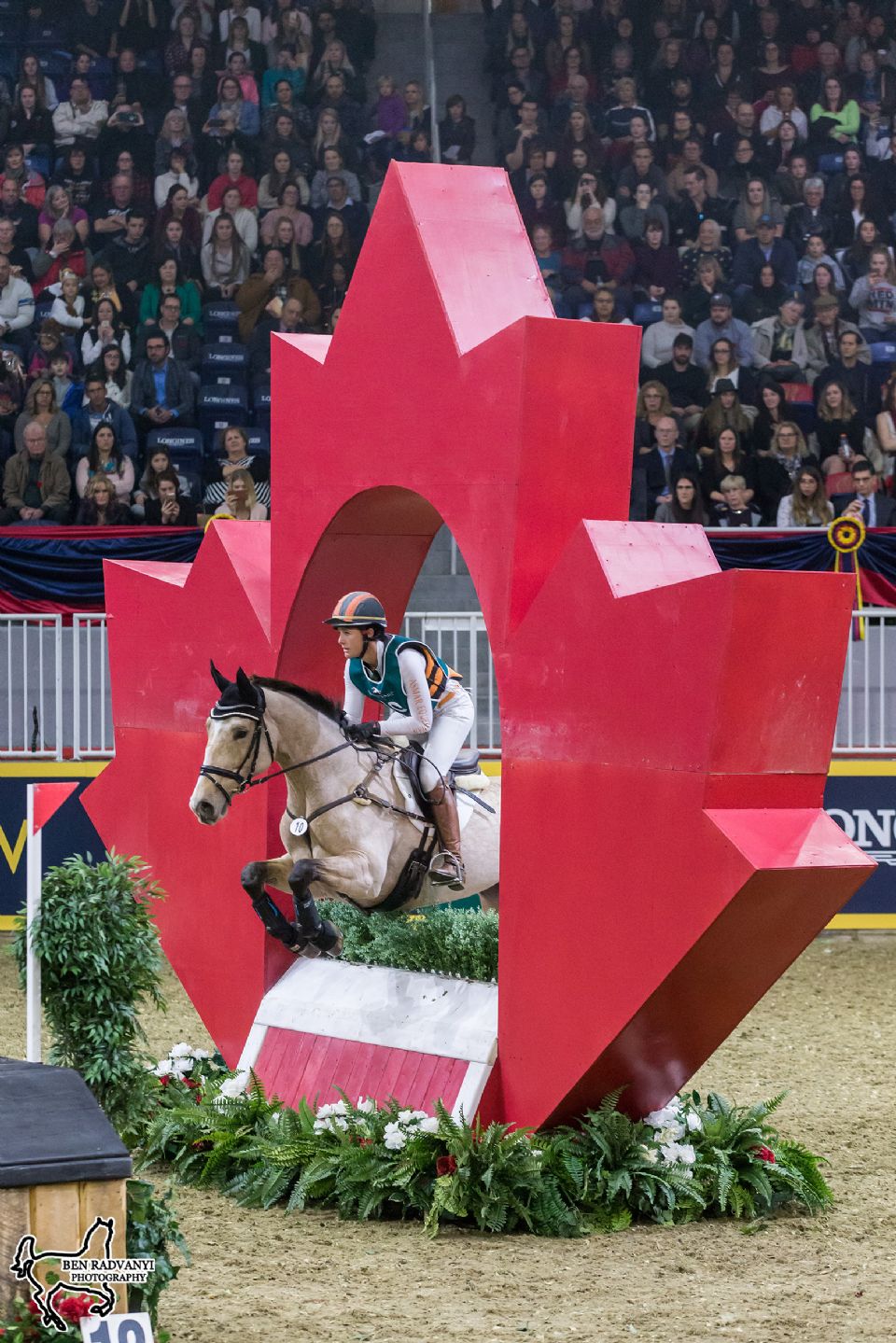 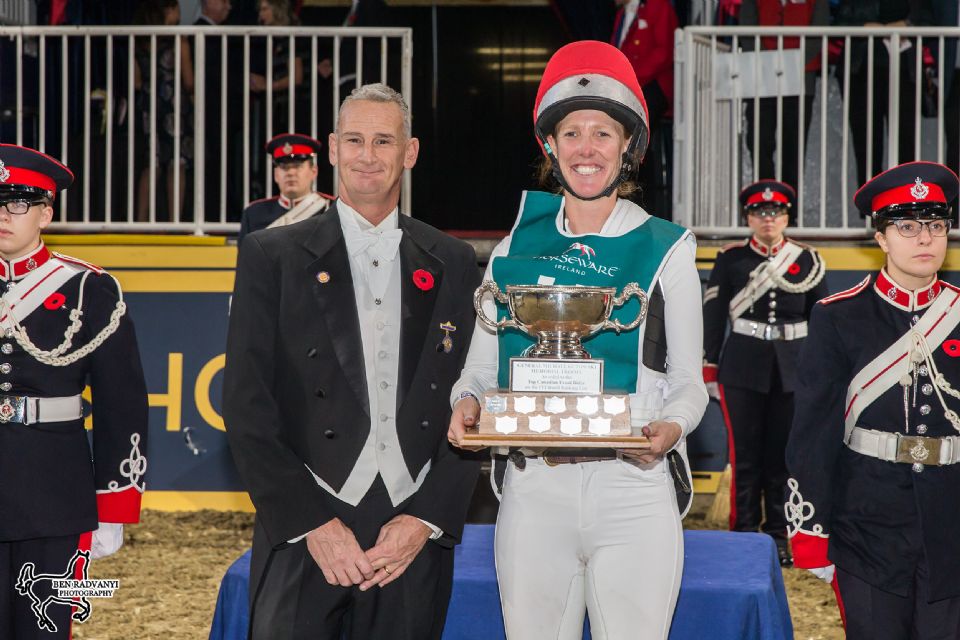 Nicole Walker of Aurora, ON, claimed the $125,000 Canadian Show Jumping Championship title on Saturday night, November 3, at the 96th Royal Agricultural Winter Fair in Toronto, ON.

Having claimed victory in Friday’s $25,000 Canadian Show Jumping Championship – Round One, presented by Lothlorien, Walker held the lead coming into Saturday night’s two-round competition.  The defending Canadian Champions, Amy Millar, 41, of Perth, ON, and Heros piled on the pressure by opening Saturday night’s competition with a clear round while Walker incurred four faults.  When the top six in the standings went through to the all-deciding final, Walker kept her cool to deliver another clear jumping round, picking up one time fault over the course set by Ireland’s Alan Wade to bring her total score to five faults.  When Millar and Heros faulted the second time out, their final score of 7.13 penalty points left them in second place, handing Walker her first Canadian Show Jumping Championship title riding Falco van Spieveld, a 13-year-old Belgian Warmblood gelding.

“I will never forget this!” said Walker, who will celebrate her 25th birthday on Sunday, November 4.  “It feels amazing.  I’m very excited for my whole team, and I think the horse deserves a title like this because he’s such a special boy.  I’m glad he could have a title to his name.”

“I had a lot of friends and family here tonight as it’s very close to home,” said Walker, who trains with 2012 Irish Olympic individual medalist Cian O’Connor and his assistant trainer, Mark Kinsella.  “But beyond everything, the atmosphere is incredible here.  It has so much tradition.  I would recommend every rider to come visit it at some point, even if they’re not riding.  It’s just such a cool experience.”

With their top finishes on Saturday night, Walker and Amy Millar earned their tickets into the international division as the two highest placed finishers in the Canadian Show Jumping Championships not already qualified.  Erynn Ballard of Tottenham, ON, Keean White of Rockwood, ON, and Ian and Jonathon Millar, both of Perth, ON, qualified based on their standings in the Longines World Rankings while Jump Canada’s high performance committee named Ali Ramsay of Victoria, BC, and Beth Underhill of Schomberg, ON, as its two picks for the international division.  The international division opens on Wednesday, November 7, featuring the $36,000 Jolera International Welcome in the evening session.

As the frontrunner following Friday night’s opening round, Kieffer was the last to return on Saturday night, and the Olympic, World Championship, and Pan American Games veteran clinched the win with a fault free ride in a time of 90.03 seconds.

“I’m thrilled.  The mare is just incredible; she tries her guts out,” said Kieffer, who was riding a borrowed mount that she rode for the first time on Friday.  “It’s very rare that you hop on something and sync together so quickly.  It was so much fun to do this on her, and I felt so in sync with her.

“Brandon and Kendal certainly put the pressure on; I was hoping for a little bit more breathing room!” joked Kieffer following her indoor eventing debut.  “The format is fun; it’s energetic.  If it gets one person to leave here and go Google ‘eventing’ and get into it, then it did its purpose.”

Finishing second was Toronto’s own Brandon McMechan riding Oscar’s Wild to a clear round in a time of 92.78 seconds to hold off third-placed Kendal Lehari of Uxbridge, ON, who was also clear riding Totally Frank in a time of 94.30 seconds.

At the conclusion of the Horseware Indoor Eventing Challenge, World Championship and Pan American Games medalist Selena O’Hanlon of Kingston, ON, was presented with the Michael Gutowski Award, donated by Mr. Iain Gilmour, as the highest-ranked Canadian athlete on the Fédération Equestre Internationale (FEI) Eventing World Athlete Rankings.

More than 1,000 horses from around the globe will compete for $980,000 in prize money during the 10-day CSI4*-W Royal Horse Show.  VIP Platinum and Gold seating, as well as group and individual tickets, are selling quickly.  All Royal Horse Show tickets include general admission to the Fair. Purchase tickets here.

For more information on the Royal Horse Show, the marquee event of The Royal Agricultural Winter Fair, please visit http://www.royalfair.org/horseshow.html.