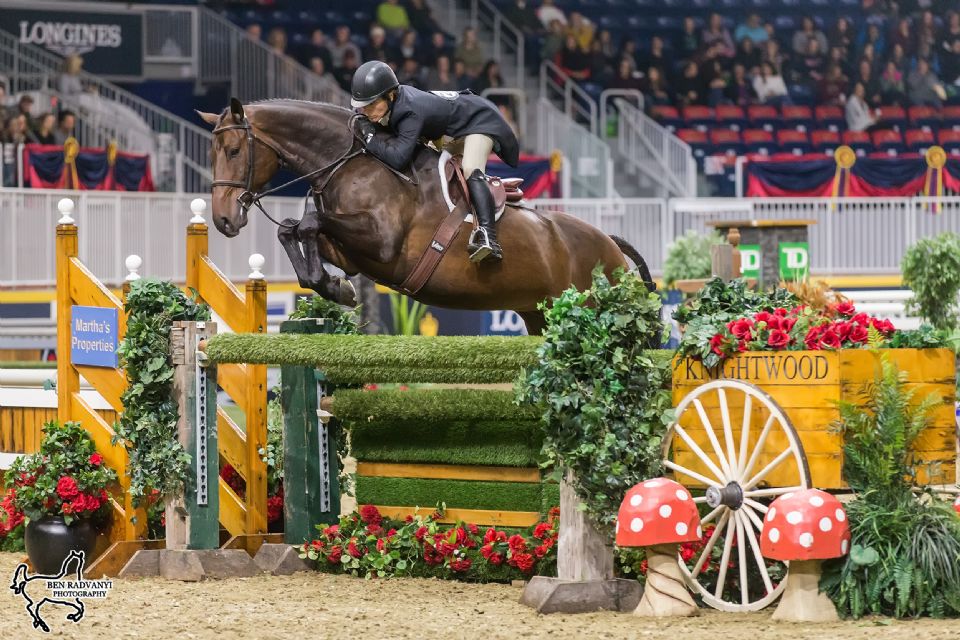 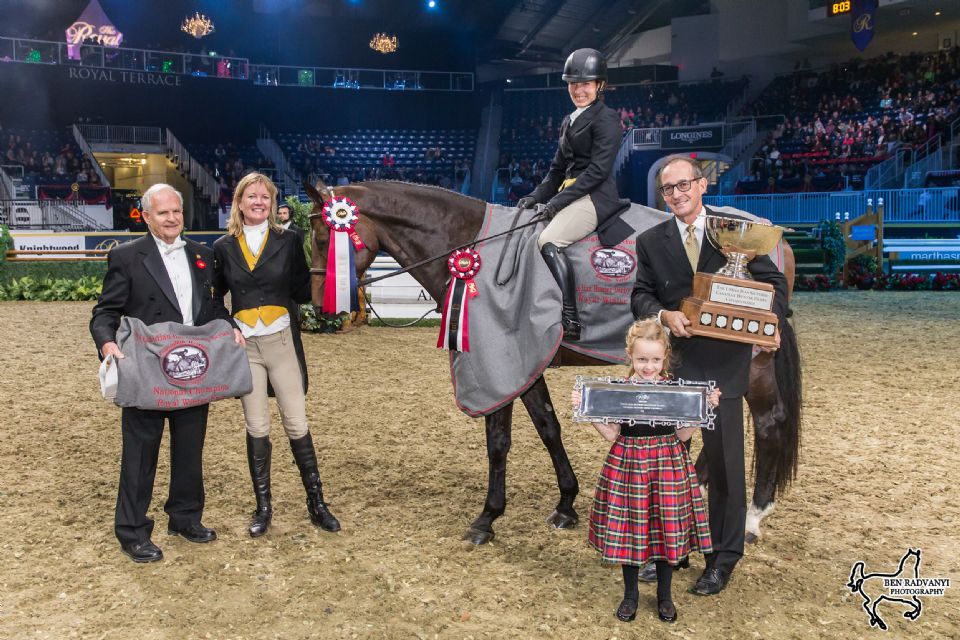 Isabelle Lapierre, pictured aboard Carrera S, is presented with the Lorna Jean Guthrie Trophy following her win in the $25,000 Knightwood Hunter Derby by Margaret ‘Muffie’ Guthrie and Jeff Brandmaier and their daughter, Liza Jean.
Photo by Ben Radvanyi Photography 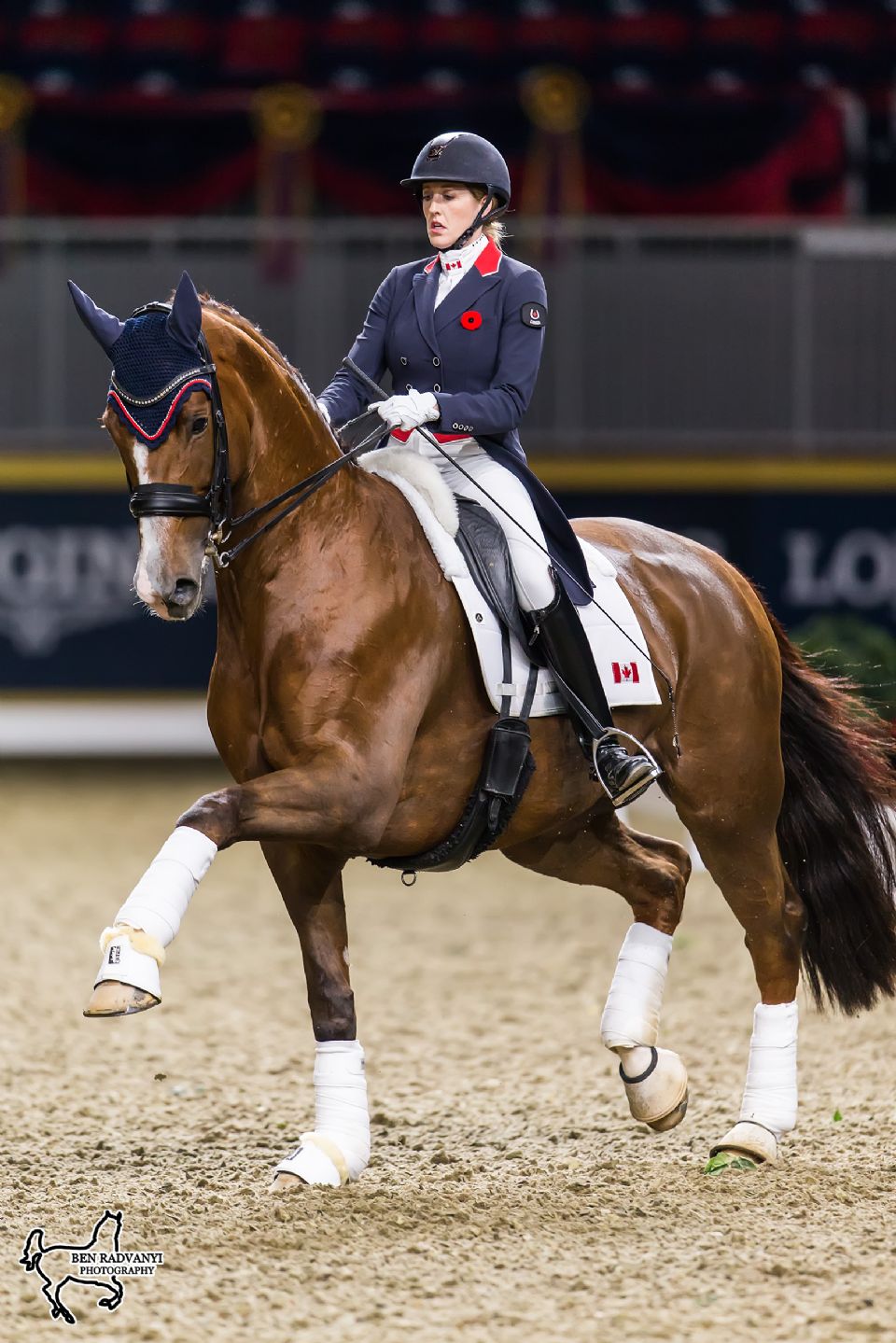 Brittany Fraser-Beaulieu of St. Bruno, QC, performed her grand prix freestyle with her 2018 World Championship partner, All In, at the Royal Horse Show.
Photo by Ben Radvanyi Photography 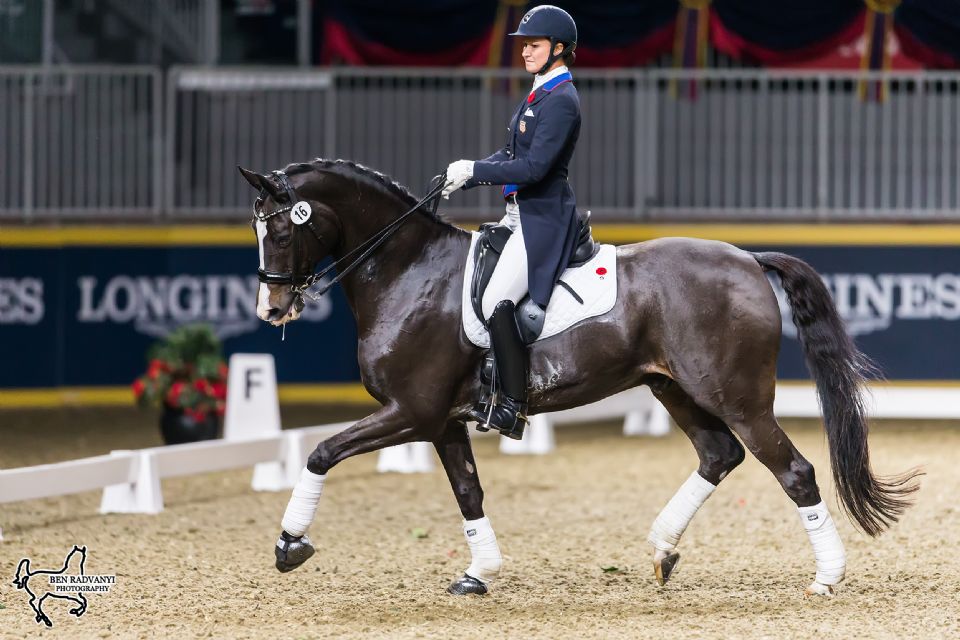 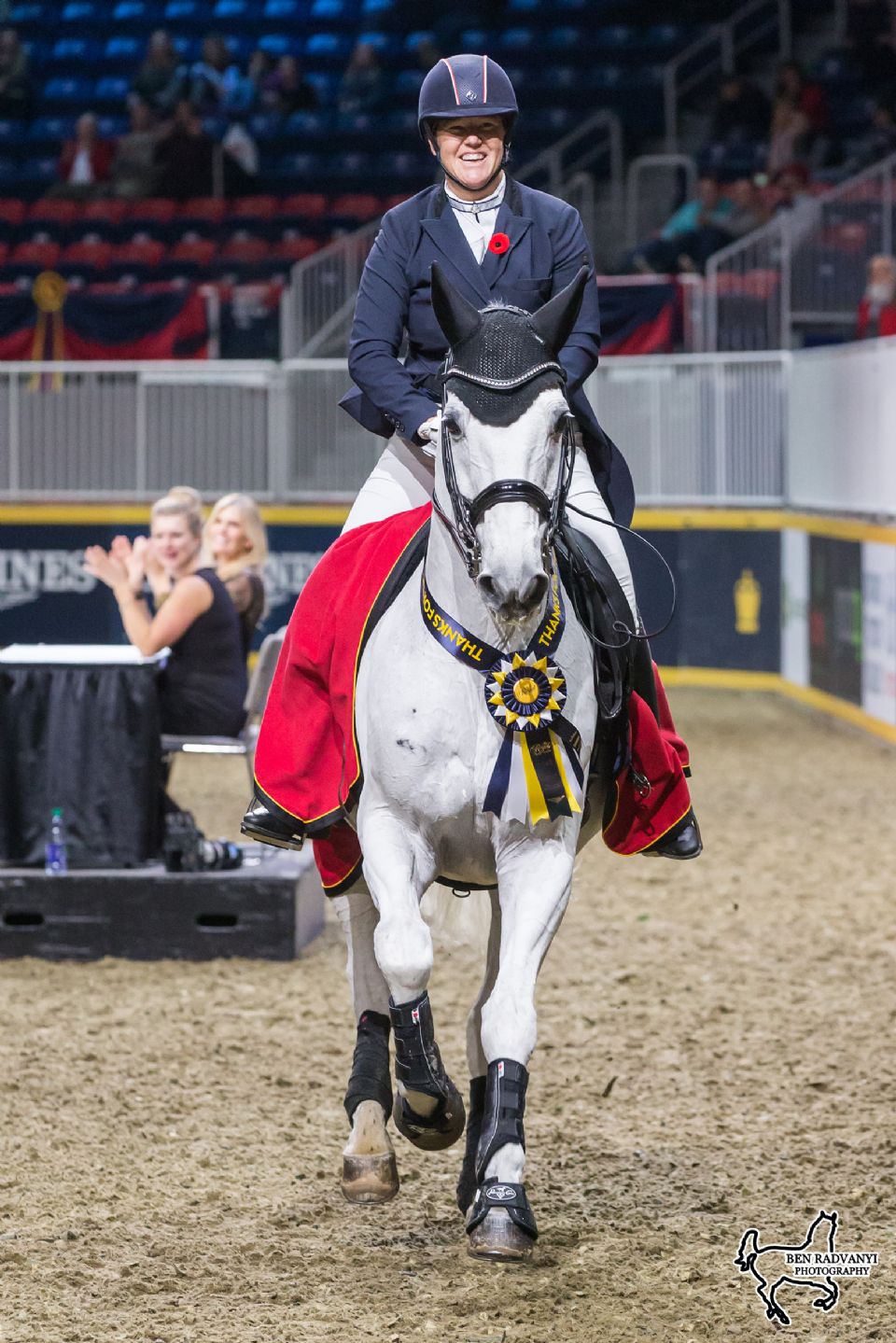 Isabelle Lapierre of Lévis, QC, rode Carrera S to victory in the $25,000 Knightwood Hunter Derby on Tuesday, November 6, at the Royal Horse Show, held as part of the 96th Royal Agricultural Winter Fair in Toronto, ON.

The win marked the pair’s second major hunter derby victory of the Royal Horse Show as they also topped Sunday’s $15,000 Braeburn Farms Hunter Derby.  With riders contesting Tuesday night’s hunter derby finale in reverse order of their standings in Sunday’s class, Lapierre and Carrera S, an eight-year-old Holsteiner gelding owned by Johannie Légaré, were the final entry to navigate the course designed by Rob Carey in the Coca-Cola Coliseum.  Judges Kitty Barker and Rob Bielefeld awarded Lapierre an overall score of 109, including a base score of 93 coupled with handy and high option bonus points, to place the pair at the top of the leaderboard.  For the win, Lapierre was awarded the Paddy Ann Burns Trophy.

“With my first horse, I did one less stride everywhere,” said Lapierre, referring to her additional entry in the class, Excellent Balou. “With Carrera S, I added a stride everywhere.  That’s why I like the derbies: it’s not just about the numbers, it’s about the way that your horse goes.  He was very relaxed, and he jumped super.  I think he gave 100 percent.”

As the highest scoring pair in both the Braeburn Farms Hunter Derby and the Knightwood Hunter Derby, Lapierre and Carrera S were presented with the Lorna Jean Guthrie Challenge Trophy as the Canadian Hunter Derby Champion.

“Maybe the best thing is to retire from doing hunter derbies!” joked Lapierre of winning Canada’s highest hunter derby honour.  “To win, it’s like a dream.”

Finishing second in Tuesday night’s class with an overall score of 107 were Erynn Ballard of Tottenham, ON, and Enchanted, owned by Christel Weller.  Not far behind with a score of 103 was Kristjan Good of Campbellville, ON, riding Chantilly Lace for owner Shannon Walter, while Ballard also picked up fourth place with a score of 96 aboard ‘Round Midnight, owned by Knightwood Stables.

The Eastern and Western Canadian Hunter Derby Series champions were also recognized on Tuesday evening, with the $10,000 Prince of Thieves Go West Trophy, presented by Jump Canada, awarded to Lapierre and Carrera S as the Eastern Canadian Champions and the $10,000 Represent the West Championship, also presented by Jump Canada, given to Kassidy Keith and Carivero, owned by Miranda Lebeuf, as the Western Champions.

Featuring an all-star cast in the Dressage Derby, four riders faced off in a knock-out style competition on Tuesday night.

Esther Mortimer of Guatemala faced off against U.S. Olympian Adrienne Lyle while Tom Dvorak of Hillsburg, ON, challenged fellow Canadian Dressage Team veteran, Jaimey Irwin of Stouffville, ON.  All four riders were competing with borrowed horses and had five minutes to familiarize themselves prior to riding a Prix St. Georges test.

Lyle won her knock-out round, as did Dvorak, to advance to the final.  Riding yet another unfamiliar mount, Dvorak went first, earning a score of 66.912% from the panel of highly-respected judges.  In her Royal Horse Show debut, Lyle used her skill and was awarded a score of 69.559% to be crowned the Royal Dressage Derby Champion.

“I’m really glad I made the trip to The Royal,” said Lyle who is based in Wellington, FL.  “I have always heard about it and never had the chance to come.  It’s an incredible venue and something really special.  This is a really fun challenge and I love only having a couple minutes to sort it out.  It’s a good test of horsemanship and strategy.  These are all really incredible riders and it was really close competition.”

Prior to the Dressage Derby, Canadian Dressage Team veteran and Royal Horse Show fan favourite, Jacqueline Brooks, retired her long-time partner, D Niro, in an emotional celebration.  Brooks, who has been competing at the Royal Horse Show since 1999, and the 19-year-old grey Swedish Warmblood gelding affectionately known as ‘Goose’ have represented Canada in international competition around the globe, including at the 2012 London Olympic Games and the 2013 World Cup Final in Gothenburg, Sweden.

As a special highlight, Brittany Fraser-Beaulieu of St. Bruno, QC, performed a grand prix freestyle which sees required movements choreographed to music of the rider’s choice.  The highest-placed member of the Canadian Dressage Team at the recent 2018 FEI World Equestrian Games in September, Fraser-Beaulieu and her mount, All In, had the crowd roaring its approval.

More than 1,000 horses from around the globe are competing for $980,000 in prize money during the 10-day CSI4*-W Royal Horse Show.  VIP Platinum and Gold seating, as well as group and individual tickets, are selling quickly.  All Royal Horse Show tickets include general admission to the Fair.