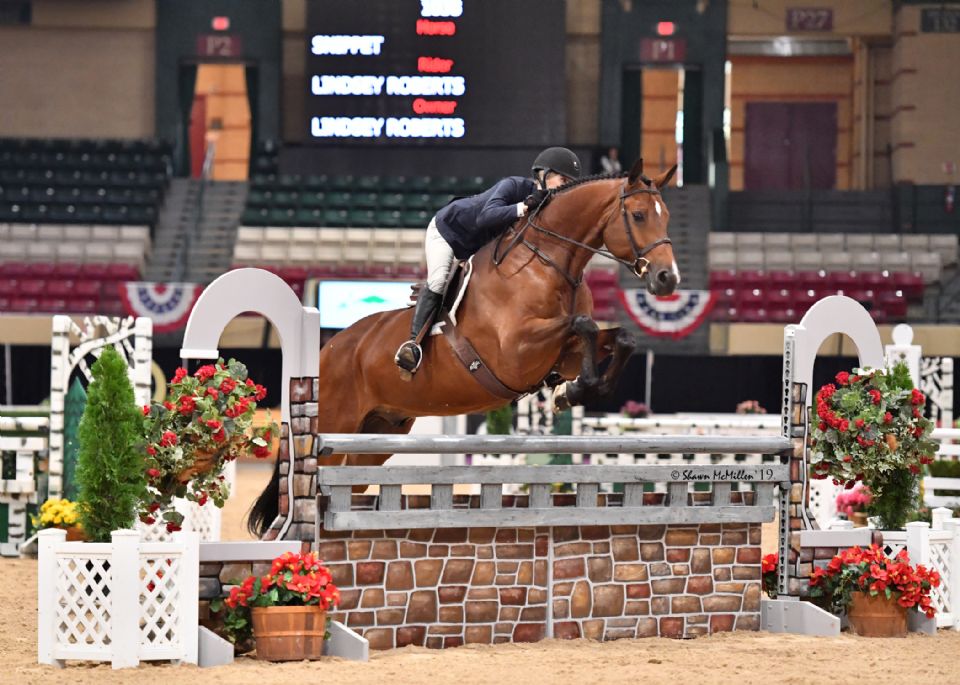 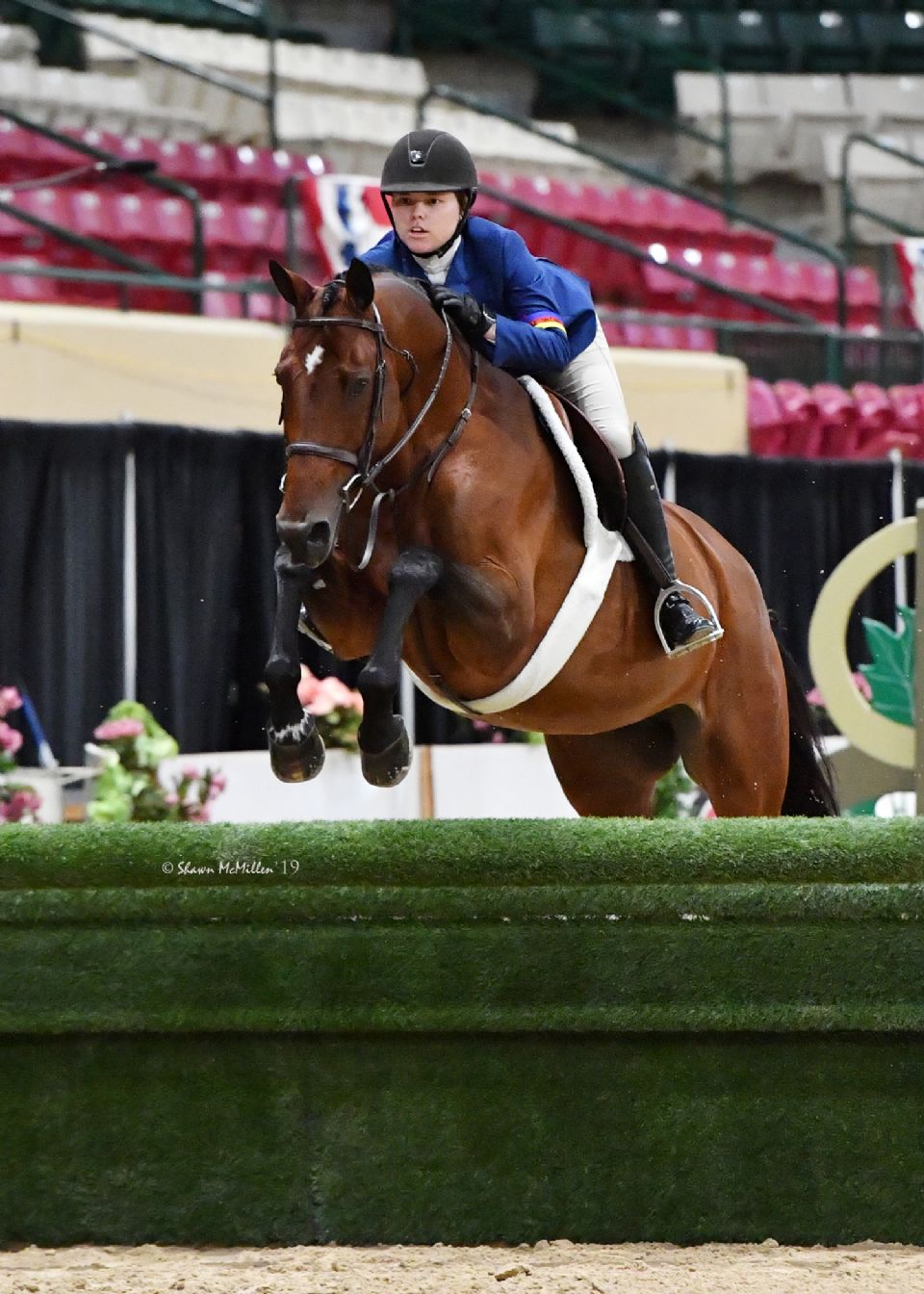 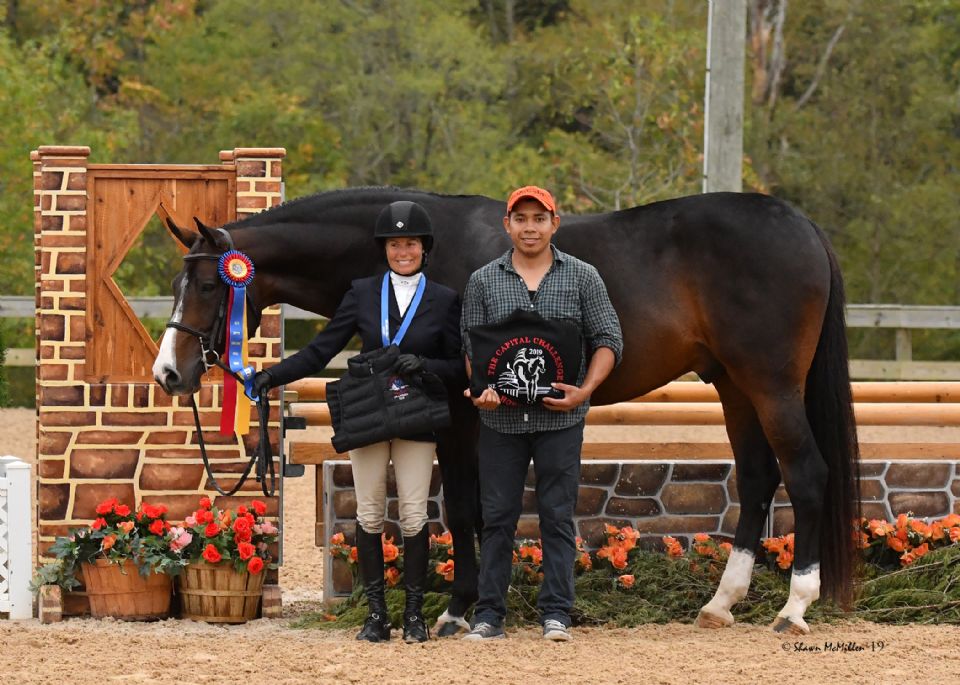 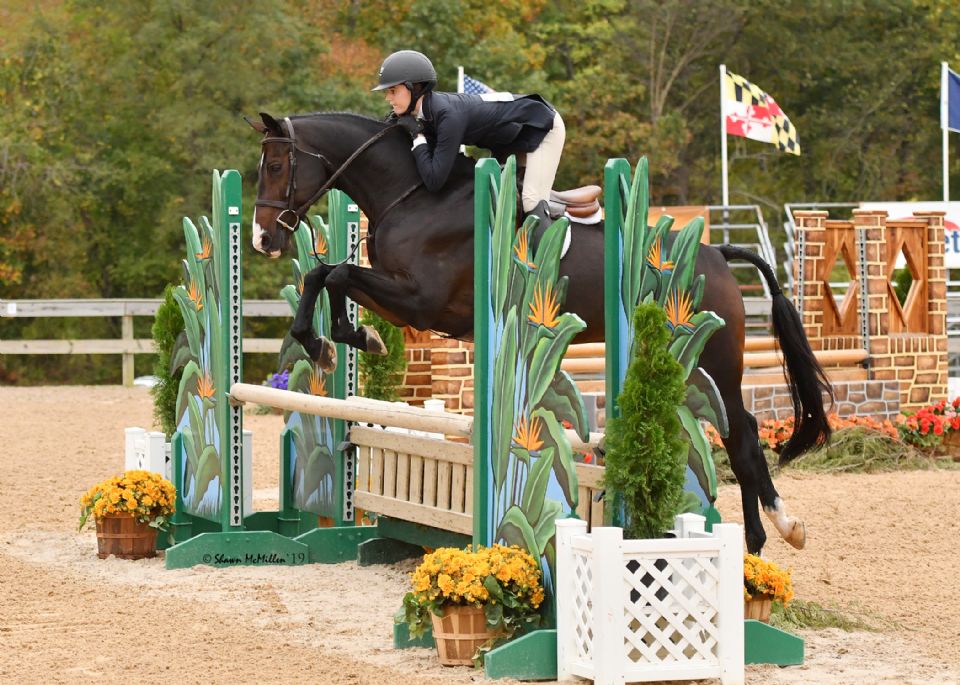 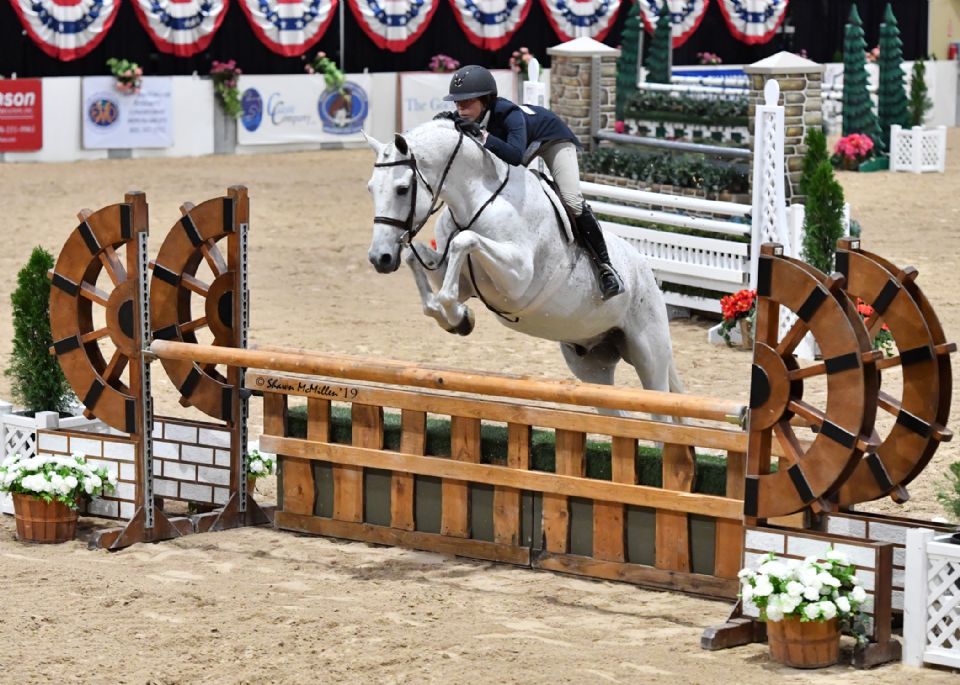 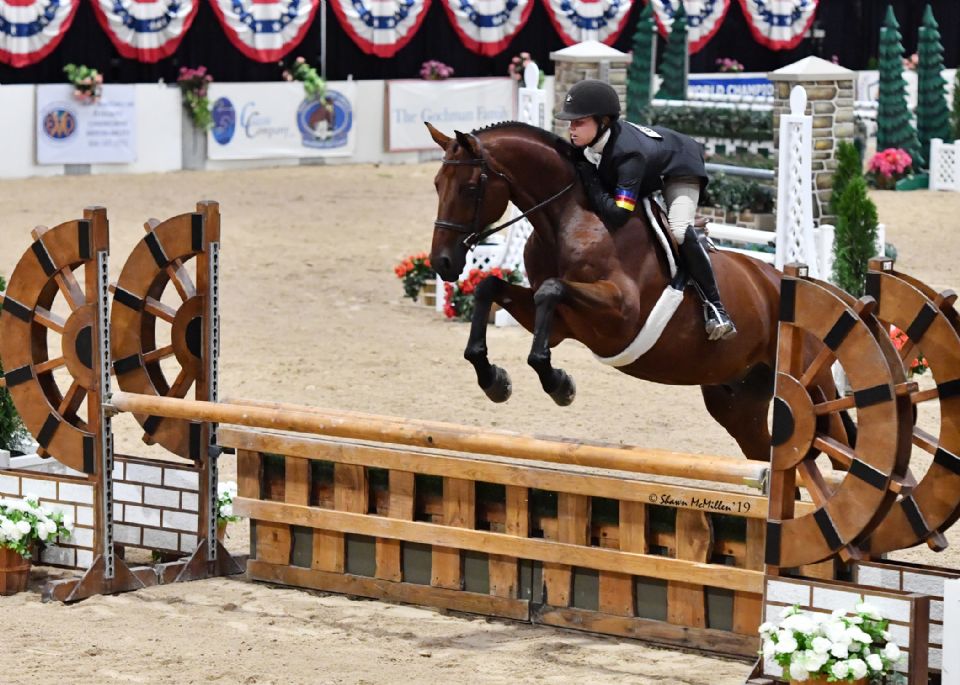 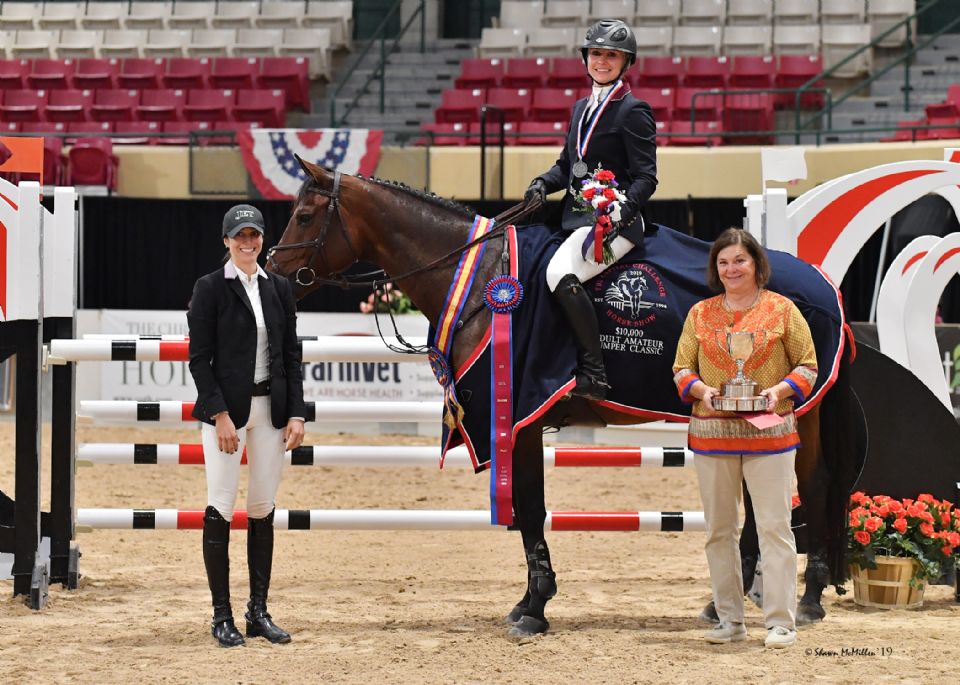 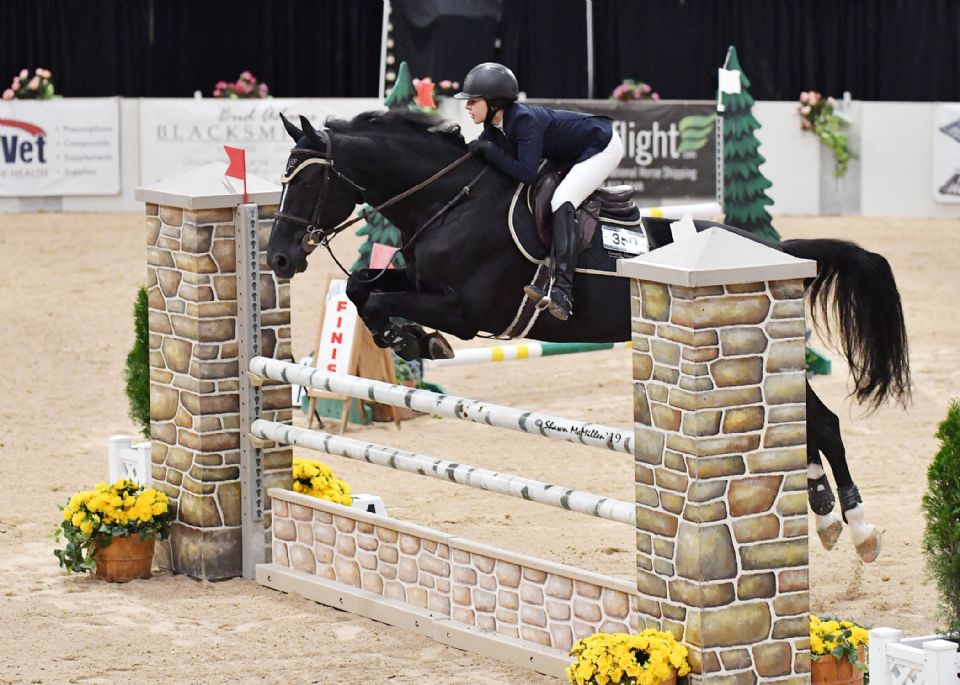 Sharing the Adult Amateur Hunter Grand Championship honors at the show, which continues through Sunday, October 6, at the Prince George’s County Equestrian Center in Upper Marlboro, MD, were Ellen Toon on Playmaker and Vivian Yowan on Calou.

“This feels like a dream, it truly does,” Roberts said. She and Snippet won all three over-fences classes in the division and took third place in the under saddle for her tricolor honors. “We’ve had a phenomenal year, but to be able to come back east to the Capital Challenge Horse Show and show against the best of the best and have it go so well, it makes it that much more sweet.”

This was the first time at an East Coast indoor show for Snippet, an eight-year-old Hanoverian by Van Helsing. Roberts has owned the bay gelding for a year, purchasing him after Terry Brown imported him from Europe. “This is his first time experiencing all this, and he’s handled it like a gentleman,” she said.

“He’s a horse of a lifetime,” Roberts said of Snippet. “I’ve had a lot of nice horses in the past that I’ve been so fortunate to ride; I’ve had a lot of success, but he’s something special. He’s a kind horse. He’s a big, scopey horse with a big stride. He’s brave, and now that I’m a mom, that’s really important to me. I never have to worry about if he’s going to spook or be silly, which gives me the confidence to go in and be a team with him.”

Roberts has two sons, ages three and eight, with her husband and trainer, Will Roberts of Pine Hollow Farm in New Caney, TX. Her days are usually spent focused on her sons. “They keep me busy,” she said. “I’m a minimalist when it comes to riding. I don’t practice a lot, but I like to get out to the barn and hack. I try to show as often as possible. I know a lot of people say that it takes a village, but in our case, it really does. My mom comes from Colorado to stay with the boys if I show during the school year, so their routine doesn’t change. It takes a lot to make the wheels go around, and I’m so incredibly grateful for that.”

Roberts has competed at the Capital Challenge Horse Show frequently in the past and tries to make the show a year-end goal. “It’s always fun to come and watch the horses and riders and compete with the best of the best,” she said. “I want to be successful wherever we’re showing, but if you can get here, that’s a huge achievement in itself. Then if you can come and do well, it’s the cherry on top of the sundae.”

In addition to their championships, Roberts and Snippet claimed the Amateur-Owner 3'6" EMO Trip of the Show, presented by Sue Bopp of the EMO Agency with a high score of an 89; and the Best Amateur-Owner 3'6" Rider Award, sponsored by Mr. and Mrs. Ernest M. Oare.

Finishing as the reserve champions in the Amateur-Owner Hunter 3'6", 18-35 division were Stephanie Danhakl and her own Golden Rule.

In the Amateur-Owner Hunter 3'6", 36 & Over, the championship, sponsored by Mr. and Mrs. Ernest Oare, was awarded to Becky Gochman of Wellington, FL, on Catch Me. The gelding, owned by Gochman Sporthorse LLC, had blues in an over-fences class and the under saddle. The reserve championship went to Katie Robinson and On The Slye, owned by Robinson Ridge, LLC.

“This is huge,” said Ingram. While Ingram had piloted Airport 48 to the North American Adult Amateur Equitation Championship in 2018, and she’s won WCHR Challenges in the past, this was her first hunter division championship at the show. “This is really special, particularly because Fonteyn has been a really special horse for me over the years. She’s been out due to injury for a year and a half, and this is her first show back.”

Ingram and her trainer, Tom Wright, opted to be conservative with Fonteyn’s recovery after her injury in 2017. “We really took our time. I would have loved to have had her back earlier in the year, but you have to do what’s right for the horse. I think it’s paid off to be patient with her,” she said. When they looked at the schedule to see what fit with Fonteyn’s comeback and Ingram’s college schedule, Capital Challenge fit the bill.

“I was just hoping for a solid round; to win was a big shock!” Ingram said of Fonteyn, a 15-year-old German Sporthorse mare by Liberty Son. “To be able to win this on her is really special. She knows when it’s time to shine. She’s a beautiful jumper, and she’s so sweet. She gives me 100 percent every time she’s in the ring. She’s so brave to come in here and do this without having done a class in almost two years.”

Ingram flew in to show at Capital Challenge in between her senior-year studies at Furman University in South Carolina. She’s studying politics and international affairs, with a minor in Middle Eastern/Islamic studies.

The reserve championship in the Amateur-Owner Hunter 3'3", 18-35 Hunters went to Enough Said, owned and ridden by Stephanie Danhakl.

Jacqueline Attwood-Dupont and Spotlight took the top spot in the $2,500 WCHR Amateur-Owner 3'6" Challenge.

“The first round was our best trip ever with me,” said Toon, of South Salem, NY, who earned a score of 90.50 for both the win in the class and the Adult Amateur Hunter EMO Trip of the Show. “The second round, I didn’t feel was as good on my part. I got a little deep, but he still jumped really well. He still got an 89, so that was nice.”

That score was enough to secure a second over-fences victory for Toon and the nine-year-old Holsteiner gelding owned by JT Farm, giving them the division championship. The division reserve championship went to Alex Stevens on her own Sky Pilot.

“I’ve been coming here since the beginning, and I think it’s the hardest of all of the indoor horse shows,” said Toon. “Because it isn’t a qualifying hose show, you get such a variety [of riders] from all over the country. The competition is really great. The horse show does a beautiful job of making the hunters special. The footing’s fantastic; the indoor is fantastic. Everything is really great. It’s really rewarding when you do well here. I love this horse show.”

“I got a text last night that I was able to show [Calou],” said Yowan of the 10-year-old Oldenburg gelding, owned by Mr. and Mrs. Bertram Firestone, that will also compete in the Junior Hunters at Capital Challenge with Eleanor Rudnicki. “I rode him for the first time this morning, so we don’t have a very long relationship!”

Yowan, from Lexington, KY, and Calou won both of the over-fences classes before taking the championship in the Adult Amateur Hunter, 18-35 division, sponsored by Lainie Wimberly and Brigadoon Show Stables, Inc.

“He’s very straightforward,” said Yowan of Lexington, KY. “He always gives a good effort at the jump. He’s a lot of fun. He kind of picks up a gallop and knows what his job is, and he does it.

“This has always been one of my favorite horse shows, ever since I did the junior hunters here,” continued Yowan, who won the WCHR Junior Hunter Challenge in 2014 and the Grand Junior Hunter Championship in 2015. “Whether you’re doing the adults or you’re doing the junior hunters or the professional divisions, I think they always make every round and every class super special.”

While getting to show Calou was an added bonus with an extremely happy ending for Yowan, the young rider initially traveled to this year’s Capital Challenge Horse Show this year to compete in both the Ariat National Adult Medal Finals, to be held on Friday, October 4, and the Adult Amateur Hunters with Condor, owned by Rebecca Morris.

It was with Condor that Yowan also took the Adult Amateur Hunter, 18-35 reserve championship, finishing second in the stake class on her way to the division domination.

For their successes, Yowan and Toon were also named the co-recipients of the Best Adult Amateur Rider Award, sponsored by Phoebe Weseley and River Run Farm, LLC.

Earning the championship in the Adult Amateur Hunters, 36-50 was Dana Brawley of Double Oak, TX, riding MTM Bazinga, owned by Nina Butler, and the reserve championship went to Laura Karet on Libretto, owned by Brad Wolf.

Competition at the 2019 Capital Challenge Horse Show continues on Friday, beginning at 8 a.m. with the Large Junior Hunter divisions in the Show Place Arena and culminating in the $10,000 WCHR Pro Finals beginning at 7 p.m.