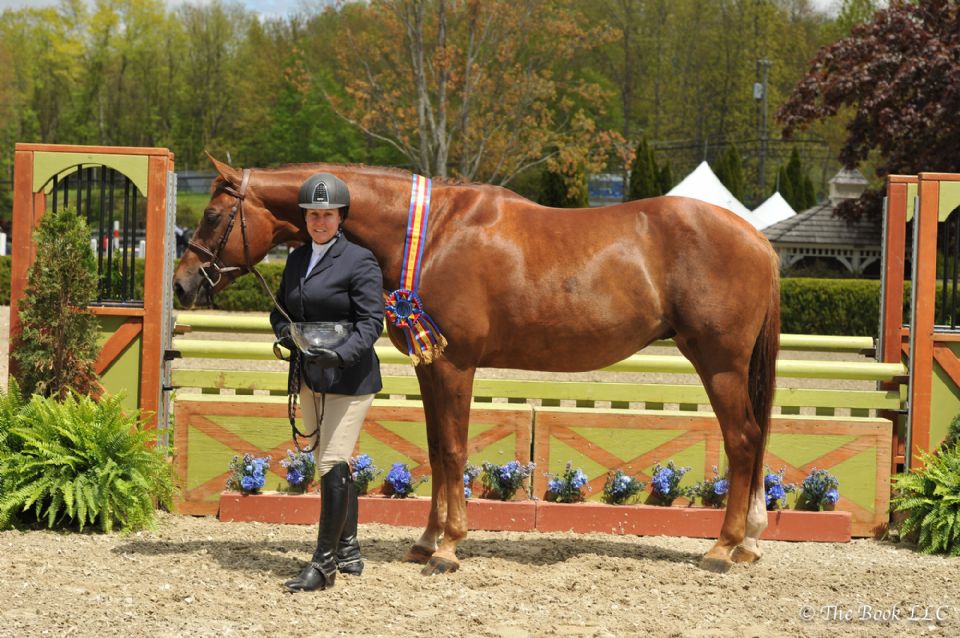 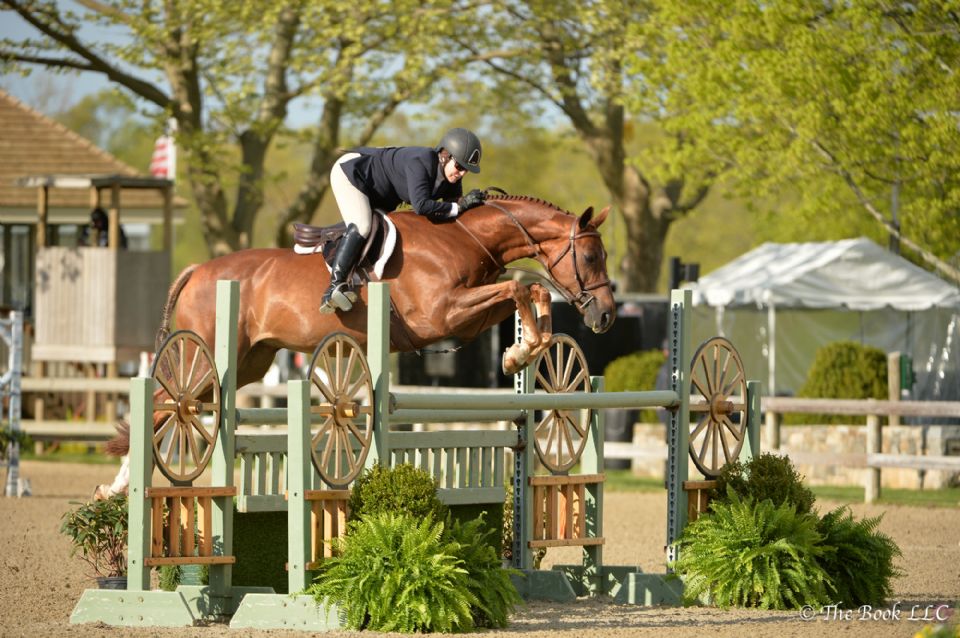 Louise Serio and Rock Harbor jumped to a champion ribbon in the High Performance Hunter Division, which won them Grand Hunter Champion honors during the 2017 Old Salem Farm Spring Horse Shows at Old Salem Farm in North Salem, NY.
Photo by The Book 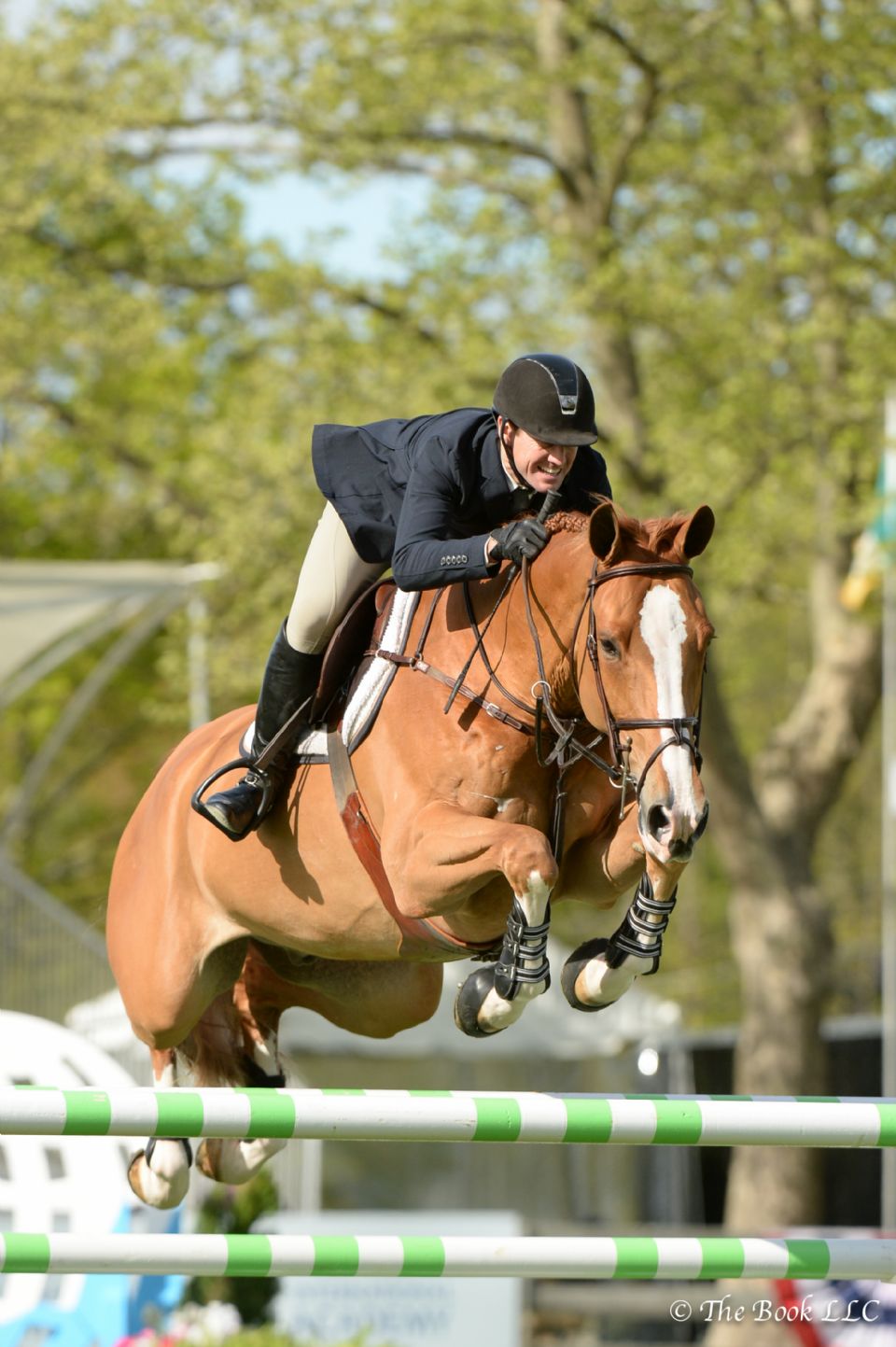 Serio and Rock Harbor, a ten-year-old Warmblood gelding owned by Jennifer Burger, pulled off a clean sweep of the High Performance Hunter Division to clinch the division championship as well as Grand Hunter Champion honors. The pair won two classes over fences and the under saddle on Tuesday before returning to win both the over fences class and the handy.

“It’s a hard thing to do,” said Serio of her five blue ribbons over two days. “I am just really proud of him. He always tries hard and has been a great horse for me."

Serio started riding Rock Harbor five years ago in the pre-green hunter division and trains the mount at her own Derbydown Stables in Kennett Square, PA.

“He loves it here, and he always performs well,” said Serio. “He loves the footing in the Sand Ring. He comes here every year, and I have to say that last year he had some of his best performances ever and he went equally as well this year.

“I like the rings here because they are big and open,” continued Serio, who includes the Old Salem Farm Spring Horse Shows on her show schedule each year. “The courses are nice, and the footing is awesome. It is a great way to get your horses outside after the winter and ready to go for the season.”

Reserve champion honors in the High Performance Hunter Division were presented to The Exchange, ridden by Holly Orlando and owned by Over The Top Stables, LLC. Orlando and The Exchange earned two second places and a third place over fences, were third in the handy, and fifth under saddle.

McLain Ward, currently ranked number two on the Longines FEI World Rankings, rode to a win in the $10,000 Open Jumper 1.40m aboard Balando, owned by Signe Ostby, to highlight competition on the Grand Prix Field at the Old Salem Farm Spring Horse Shows.

Ward, who hails just minutes from Old Salem Farm in Brewster, NY, piloted Balando, an 11-year-old Dutch Warmblood gelding (Burggraaf x Jasper), to a clear speed round in 54.38 seconds. The time was enough for the win over a field of the 56 riders competing over courses built by Ken Krome of Westminster, MD.

Open Jumper competition continues with Thursday’s $10,000 1.40m – 1.45m on the Grand Prix Field, while the Grand Adult Amateur Hunter Champion will be crowned in the Main Hunter Ring.

Spectators are welcome at the Old Salem Farm Spring Horse Shows. General admission to Old Salem Farm is free Wednesday through Friday. On the weekends of May 13-14 and 20-21, admission is $15 for adults and $10 for seniors and children under 12.