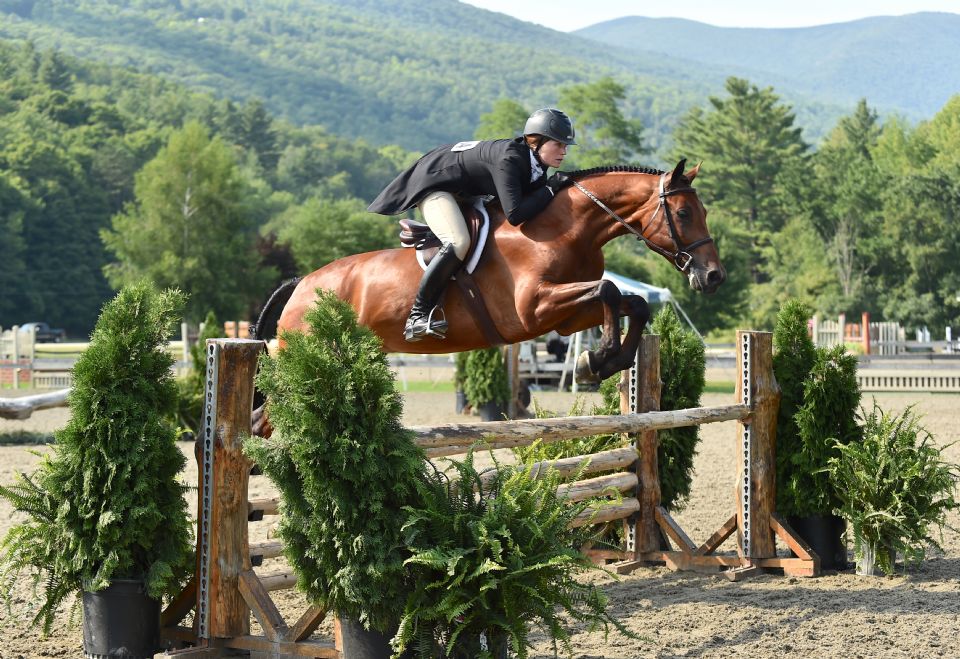 Sarah Barge and Danturano won the $15,000 3'3” NEHJA Hunter Derby, presented by Land Rover Experience, on August 11 during the final week of the Vermont Summer Festival.
Photo by Andrew Ryback Photography 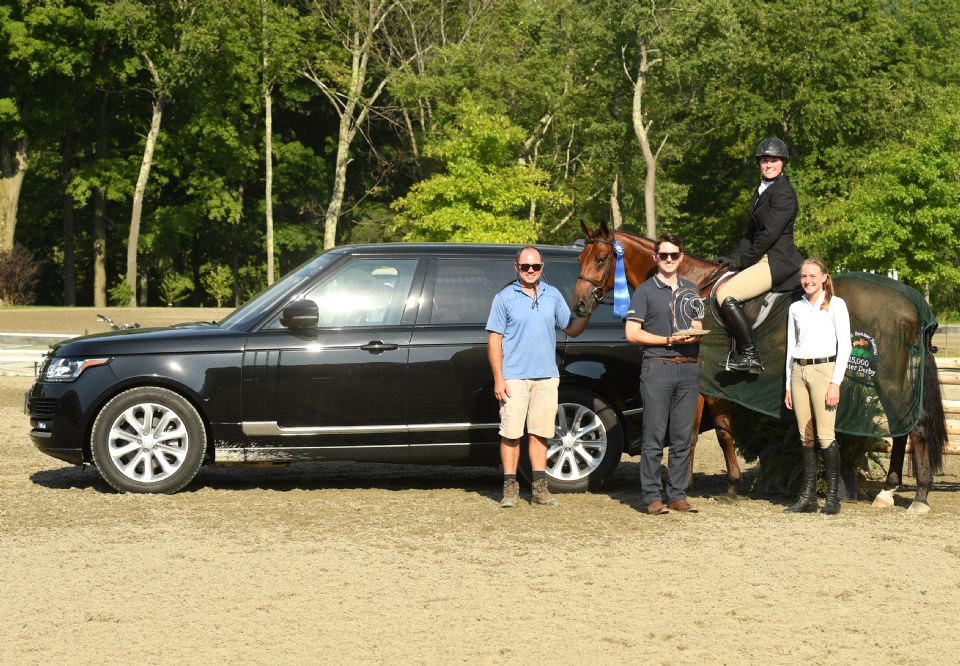 Barge and Danturano, owned by Sydney Degrazia, scored 86.5 points in the opening round over the track set by course designer Joe Carnicom of Toledo, OH.  Advancing to the handy round, they again impressed the judges to earn the top score of 88 points, giving them an overall total of 174.5 points for the win. A total of 30 entries contested the final hunter derby of this year’s Vermont Summer Festival.

Having won the $5,000 3'3” NEHJA Hunter Derby, presented by Eastern Hay, during week five, Jimmy Torano of Wellington, FL, had another successful outing aboard Levland, owned by The Levland Group. The pair earned scores of 87 in the classic round and 85 in the handy round for a combined score of 172 points to place second. Amy Momrow of Wellington, FL, placed third riding Curb Appeal, owned by Monty Kelly. Momrow earned the highest score in the opening classic round, an 88, and scored an 83.5 over the handy course for a total of 171.5 points.

Louisa Attenborough of Manchester, MA, riding Sweet Caroline earned scores of 84 and 86 to place fourth with a total of 170 points. Momrow also placed fifth with Relevant, owned by Melissa Wight, with scores of 83 and 82 for a final total of 165.

Barge began riding Danturano at the end of the 2016 winter season in Florida after the eight-year-old gelding was imported by Emil Spadone’s Redfield Farm.

“I need to thank Emil so much for finding this horse,” said Barge, who operates Stone Lane Stables of Bloomfield, NY. “He is a really special horse. Emil was the one who saw that in him as a youngster, and had a vision for him.”

Barge and Danturano were the winners of the $5,000 3'3” NEHJA Hunter Derby, presented by Eastern Hay, during week two at the Vermont Summer Festival before returning to win the grand finale on Thursday, which offered a $15,000 purse.

“He has come along a lot faster than I anticipated,” said Barge. “It is very exciting to see how relaxed he has become so quickly. He was still quite green at the start of the season and it has been nice this summer to see him grow up. I was hoping he would be really good, just like he was a few weeks ago, but you never know. He was awesome and it is always nice to win.”

Barge is taking Danturano's future day by day saying, “He has exceeded all my expectations so far, and I hope to see him continue to progress the way he has been recently.

“What I like about him is that he is unassuming,” continued Barge. “He is not a super-flashy horse, but when you see him jump his first jump, you can't help but watch him.”

Barge and her team has competed at the Vermont Summer Festival for four of the six weeks offered, noting, “There is nothing we don't love about Vermont.”

Following Thursday's win, Barge was presented with her share of the $15,000 in prize money and a commemorative scrim by Mona's Monograms from Land Rover Driving Experience representative Sebastien Dutton. She also received a custom-designed handmade ribbon box from Horse and Home.

The Vermont Summer Festival also presented special awards to Lisa Rex of Westbury, NY, who was honored with the Kastel Denmark Ladies Style of Riding Award following her sixth-place finish on Refinida, owned by Over The Top Stables, LLC., as well as to the highest-scoring junior and amateur competitors in Thursday's $15,000 3'3” NEHJA Hunter Derby. A $50 gift certificate to Jods and an embroidered saddle pad were presented to junior rider Billi Rose Brandner of Weston, MA, who rode her own Just Looking while amateur competitor Emilie Welles of New York, NY, earned a $50 gift certificate to Hadfield's Saddlery and an embroidered saddle pad for her performance on Rehy Wonder Boy, owned by Fiach Byrne.

For over 20 years, the Vermont Summer Festival has attracted exhibitors and their families to the Manchester region in southern Vermont for great competition in an ideal summer setting.  Outside the show ring, exhibitors enjoy the charm of Vermont's shopping, dining, and outdoor activities.

The final week of competition at the Vermont Summer Festival continues with the $50,000 Vermont Summer Celebration Grand Prix on Saturday, August 13 and concludes on Sunday, August 14. Admission is $6 for adults and $3 for children from Wednesday through Friday beginning at 8 a.m.  On Saturday and Sunday, admission is $9 for adults and $5 for children with 100% of all gate proceeds benefiting the Manchester Community Library, Dorset Equine Rescue, and Meals on Wheels.

Please e-mail or visit www.vt-summerfestival.com for more information about the Vermont Summer Festival.