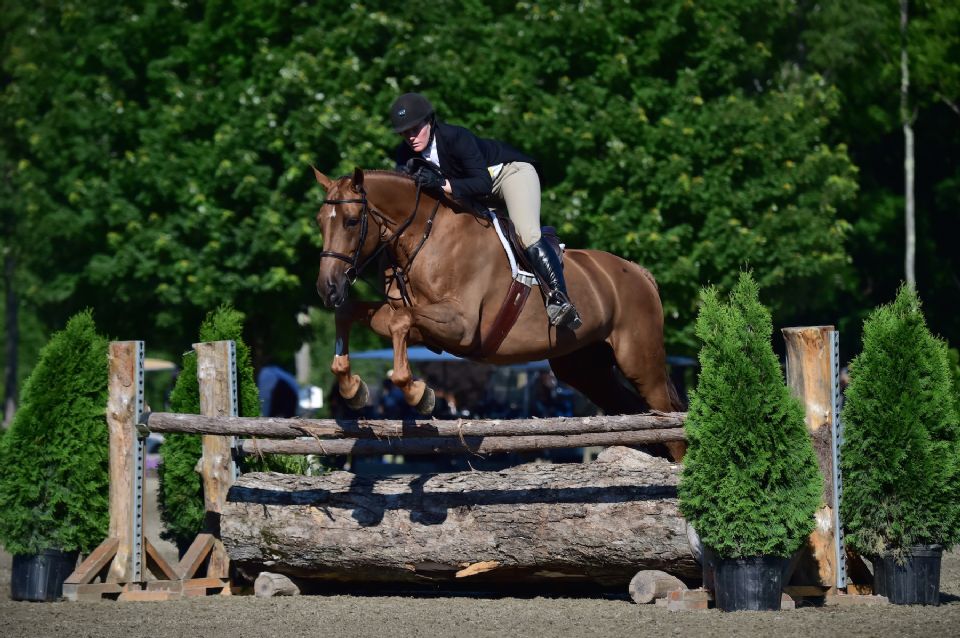 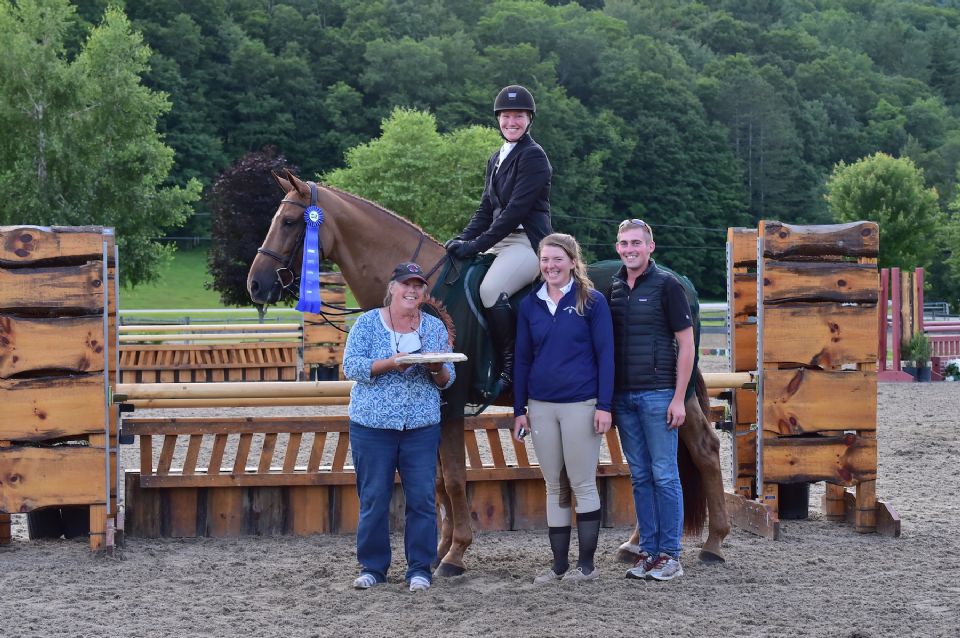 Sarah Tyndall and Huckleberry Finn, along with members of their team, are presented as the winners of the $5,000 NEHJA Performance Stake Hunter Derby, presented by Eastern Hay, at the Vermont Summer Festival.
Photo by David Mullinix Photography

Tyndall piloted Huckleberry Finn, a 14-year-old German-bred gelding owned by Susan Huyett, to the top scores in both rounds of competition. The pair earned an 86 in the first round and a score of 88 in the second round for a total of 174 to top an impressive field of 46 starters.

The track, set by Doug Russell of Ocala, FL, spanned two competition rings as it does each Thursday afternoon during the six-week Vermont Summer Festival. Following the first round, the top 12 entries returned in reverse order of standing for a handy course, which again utilized both rings. Tyndall returned last and successfully defended her spot at the top of the leaderboard.

Kristy Herrera of Wellington, FL, and Exaltation, owned by Sarah Cabot, were close to their second win in a row after clinching week two's Hunter Derby. This week, their scores of 84 and 83 combined for a 167, putting them in second place by a single point.

Keri Kampsen of Wellington, FL, and Balletomane, owned by Micaela Kennedy, jumped to an 85 and 81.5 for a total of 166.5 and third place. Kampsen was also presented with the Kastel Denmark Style of Riding Award for her performance in the tack.

Amanda Steege of Ocala, FL, and Surreal scored 81 and 85 for a total of 166 to place fourth for owner Katherine Page. Meghan Kaupp of Pittsford, NY, and Uniek, owned by Samantha Rice, rounded out the top five with scores of 79 and 84 for a 163 total.

Thursday's event was Tyndall's first derby with Huckleberry Finn at the Vermont Summer Festival this summer, but the duo has a storied past together.

“I have had the ride on him since he was a First Year horse in 2009,” said Tyndall, who is a trainer at Stoneymeade Farm in Concord, MA. “I know him very well and brought him up through the ranks. We have a lot of confidence in each other.”

Tyndall started honing Huckleberry Finn's derby skills over the last couple years while his owner, Huyett, was away at college.

“He's the quintessential derby horse – a beautiful style, great jump, very brave and really handy,” said Tyndall. “He's a blast to ride. Keep squeezing, and you're going to see the distance. When he's relaxed, I have the most fun on him that I've ever had on a horse.”

For the win, Tyndall and Huckleberry Finn were presented with various awards, including their share of the prize money, a trophy, and a personalized scrim by Mona's Monograms.

Hunter riders are now three weeks closer to the $15,000 Performance Stake Hunter Derby, sponsored by Land Rover Experience. The high-stakes offering will take place during the final week of the Vermont Summer Festival on Thursday, August 6.

Competition at the 2015 Vermont Summer Festival runs weekly from Wednesday through Sunday, beginning each day at 8 a.m. Admission is $6 for adults and $3 for children from Wednesday through Friday. On Saturday and Sunday, admission is $9 for adults, $5 for children. 100% of the gate proceeds benefit the Manchester Community Library and Dorset Equine Rescue. Week three of the Vermont Summer Festival will feature the $30,000 Otter Creek Prix on Saturday, July 18, at 1 p.m.