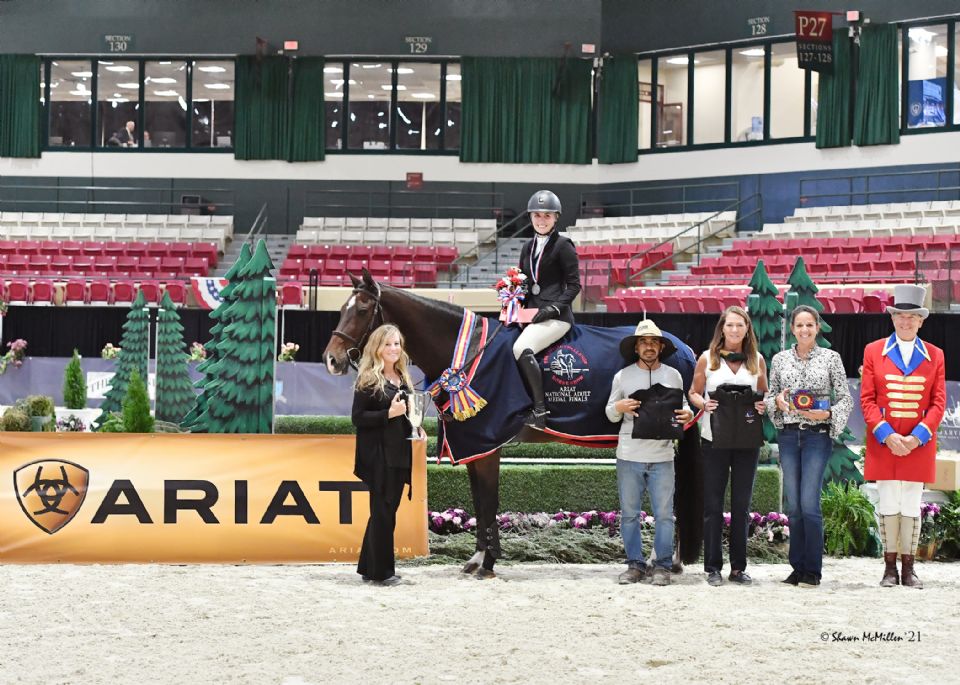 Jaden Olson and Conradical in their winning presentation for the Ariat National Adult Medal Finals.
Photo by Shawn McMillen Photography 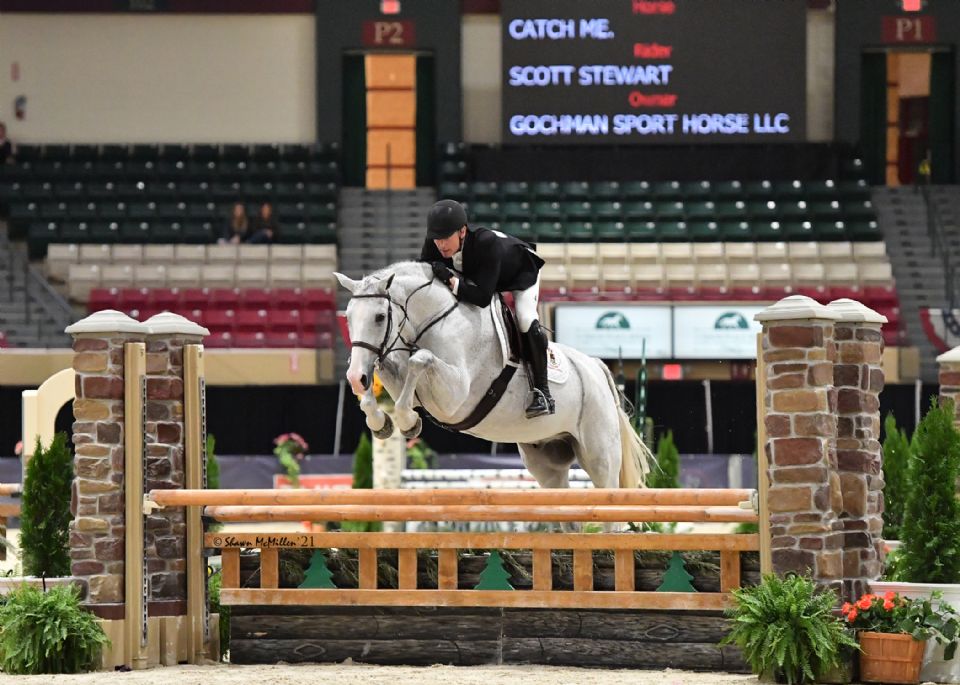 Scott Stewart and Catch Me.
Photo by Shawn McMillen Photography 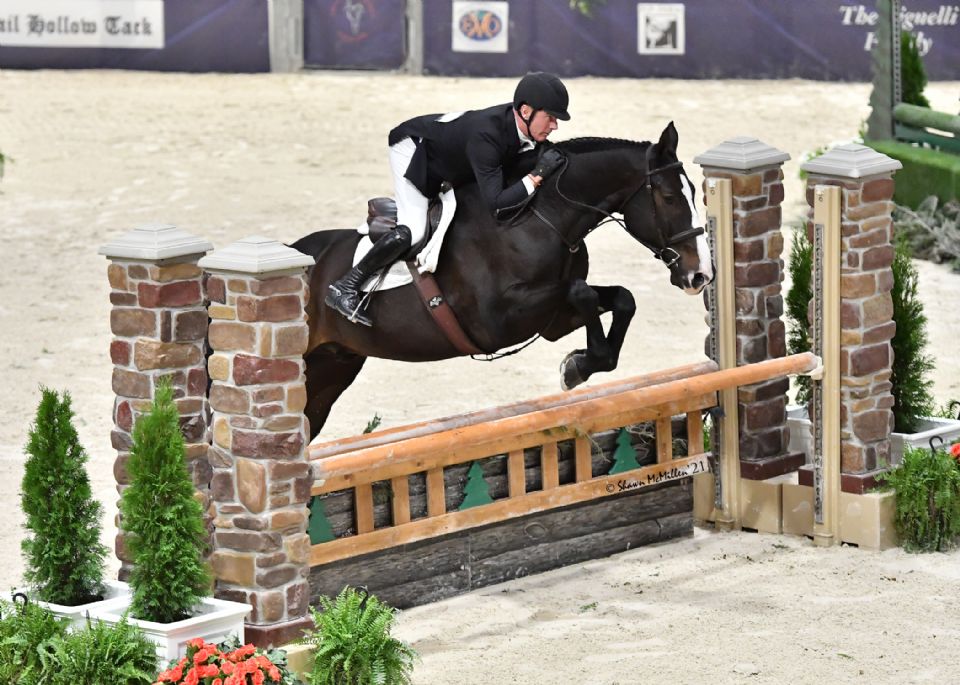 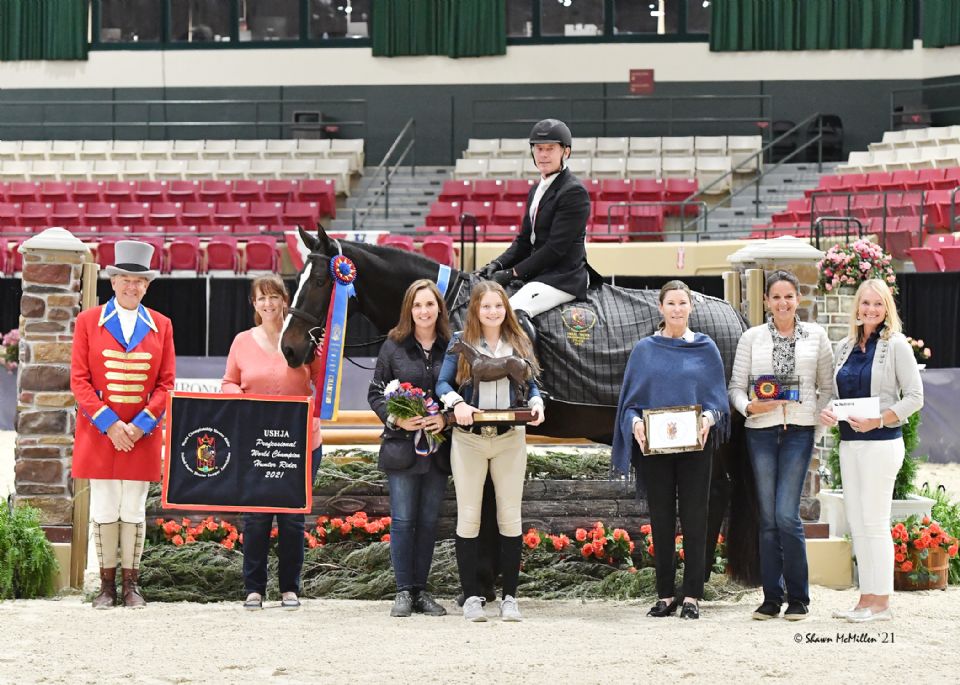 Scott Stewart on Nabisco in his winning presentation for the $10,000 WCHR Professional Finals, presented by the Rein Family.
Photo by Shawn McMillen Photography 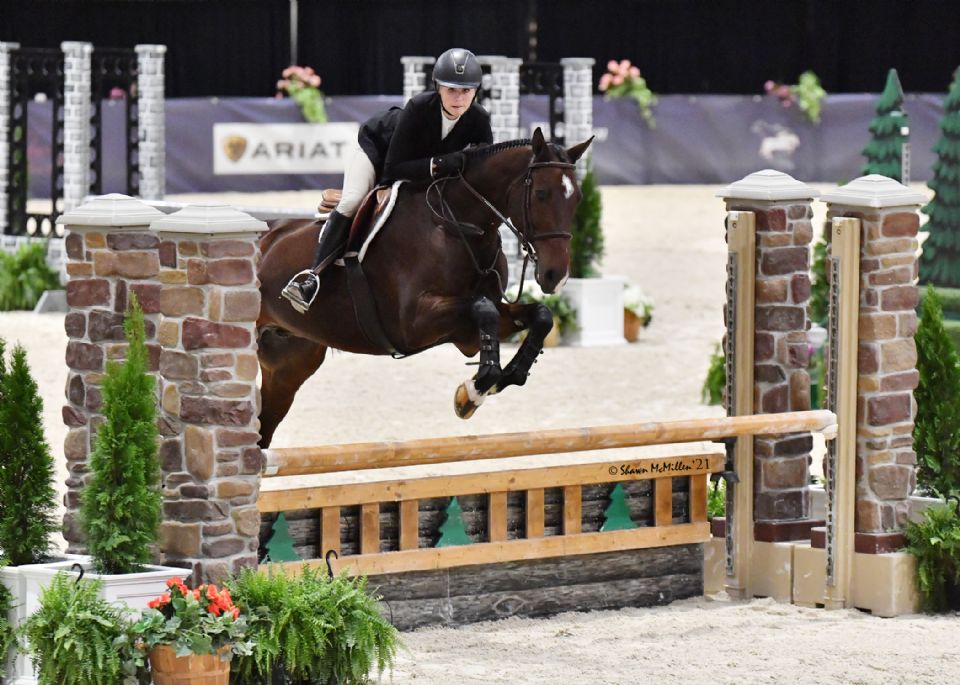 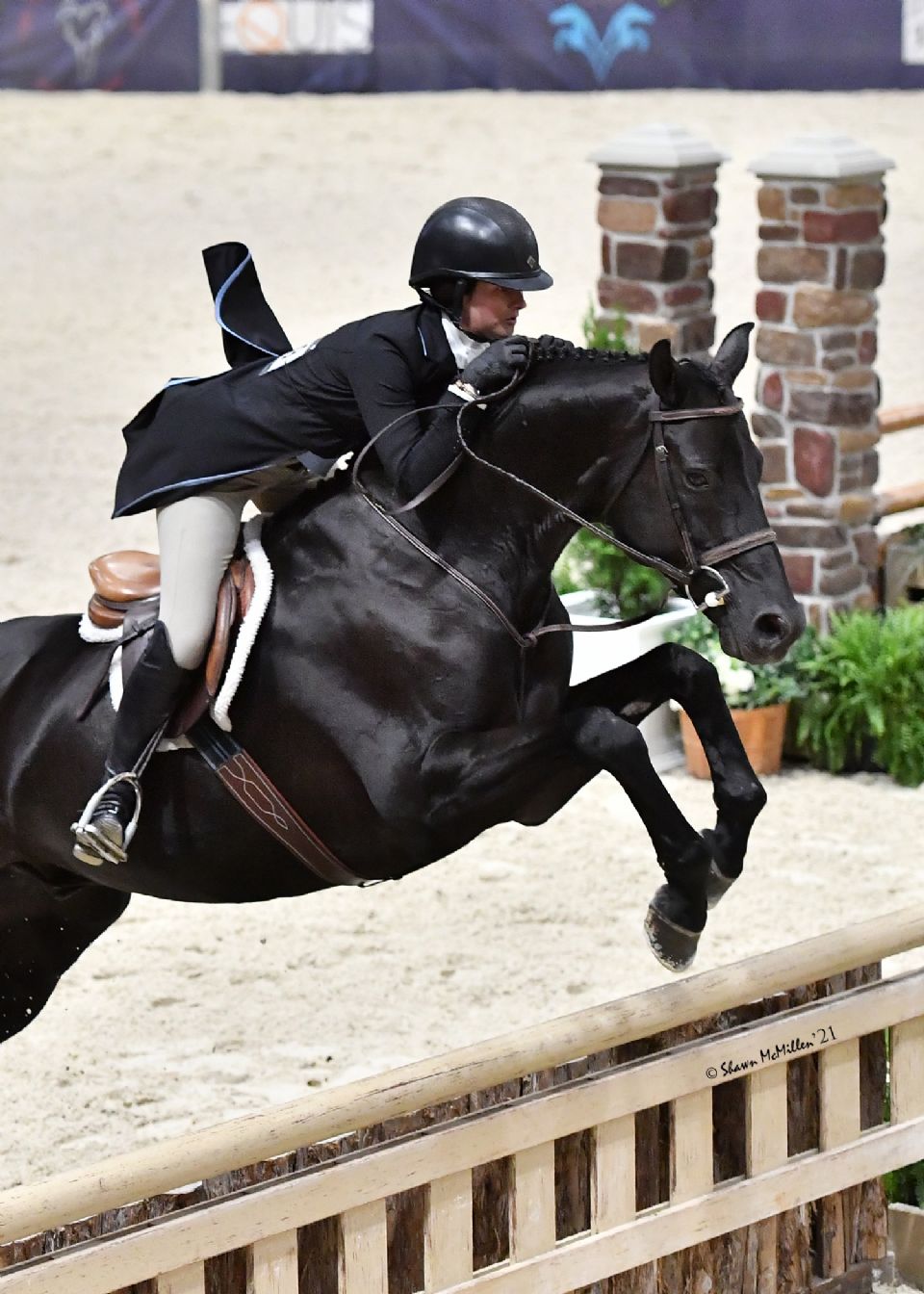 Six of the country’s top professional hunter riders went head-to-head, and in the end Stewart, of Wellington, Florida, could not be beat.

“I always get nervous for these types of class,” admitted Stewart. “Excited, but a little bit nervous. So many things can go wrong for any of us. Whoever wins the class is always the luckiest. They are the luckiest draw, the luckiest for not hitting a jump or swapping. Obviously everybody rides great, so it’s just who was luckiest that night.”

The $25,000 WCHR Professional Challenge, held on Wednesday, October 6, counted as the first score toward the WCHR Professional Finals. The top six riders in the national WCHR professional standings brought forward their scores from Wednesday into Friday’s class.

The six riders competed in the opening Playoff Round over a handy hunter course on the horse of their choosing. The top four riders from that round then advanced to the Final Four, where they took turns riding unfamiliar horses.

This was Stewart’s 21st time competing in the class, and he was joined by John French, Jimmy Torano, Victoria Colvin, Amanda Steege, and Geoffrey Hesslink in the Playoff Round.

Stewart piloted Gochman Sport Horses LLC’s Catch Me to the highest score in the handy Playoff, an impressive 91.33, which was combined with his challenge round score of 87.75 for a total of 179.08 and second place in the Playoff Round.

“[Catch Me] hasn’t really done many of these types of handy rounds before, so I was really pleased the way he went,” said Stewart of the 14-year-old Holsteiner gelding. “It was really one of my most fun rounds on him, and he was great. The Gochmans let me use him here because Mimi [Gochman] is at USEF Talent Search Finals, and it was good prep to get him into the ring as well before Harrisburg next week. He is just a phenomenal horse, and I appreciate having him.”

French of Wellington, Florida, piloted Ocean Road, owned by Marnell Sport Horses, to win the Playoff Round with a challenge round score of 85, a handy round score of 87, and a total score of 182. Torano placed third in the Playoff Round on Isalou Inc.’s Laskano with a score of 176.49, and Colvin earned fourth on Libbie Gordon’s Montauk with a score of 169.66. Amanda Steege and Lafitte de Muze, owned by Cheryl Olsten, finished fifth on 166.75, and Geoffrey Hesslink was sixth with 130.95 riding Shadowfax Equestrian LLC’s Small Occasion.

Stewart, French, Torano, and Colvin started on a clean slate as they returned to each jump four courses, rotating turns on horses generously donated by their owners.

French took the lead in the first rotation with a score of 92.66 on Elise Iafrate’s Nabisco and maintained that lead while riding Sarah Entzian’s Spectacular in the second rotation and Brannon Loomis Mooney’s Q King of Hearts Z to a score of 90 as his third horse. He held the lead by just one point going into the final rotation.

Stewart stayed cool under pressure and posted a 93.33 on Nabisco in his final rotation to take over the top of the leaderboard with a total score of 368.99.

In the first three rotations, Stewart earned a 90 with Spectacular, a score of 93 on Q King of Hearts Z, and a 92.66 with Diablue 7. He was the only rider to not score below a 90 in all four rotations.

Stewart earned his highest score in the final rotation on Nabisco. Initially, the instruction of how to best ride Nabisco made Stewart nervous because it was not his usual style.

“He’s very nice with a huge stride,” said Stewart. “You have to give him a little room at the jump and not completely let go of his mouth, which most of the time I’m trying to let go, so it was a different feel for me. I was afraid he was going to be a bit tired, but he actually jumped really well for me over the last round.”

Following Stewart in points was French with a total score of 363.66 to earn a second-place finish. Torano was awarded third with a score of 559.15, and Colvin rode to fourth place with a score of 353.32.

French, who won the $25,000 WCHR Professional Challenge on Wednesday and has won the Professional Final four times, was pleased with the format this year.

“I liked that my score from the other day brought me into this round,” explained French. “I was able to not have to do anything crazy in the handy round tonight to make the top four. I rode a horse in the handy, Ocean Road, who is owned by the Marnells, and actually he was really good. I don’t normally ride him; he does the junior hunters. I showed him once or twice in a class before, so it was nice for them to give me the opportunity to ride him tonight.”

Torano enjoyed his first appearance in the class and was very thankful not only for the donated horses in the top four, but also for his mount in the handy round, Laskano.

“Coming in tonight for the handy I thought [Laskano] was great and really neat everywhere,” said Torano, of Wellington, Florida. “He put me into the top four, and it was fun to do.

“It’s nice going head-to-head with these guys,” he continued. “We do this day in and day out. We show against each other every single week, and this is fun because it’s a different format. I think over the years in watching it they seem to tweak it, change it, and always make it a little more interesting, and I think that’s nice. I’d like to do it again if I have the horses.”

Although Colvin paired up with an unfamiliar mount for the handy round, the rider was still able to earn her spot in the final four ride-off.

“I was fortunate to have Libbie Gordon’s Montauk to show in the handy round,” commented Colvin, of Loxahatchee, Florida. “I wasn’t sure I’d have a horse, so I’m grateful she lent me that horse and he was great to get me into the top four. I thought everybody had a great night, and it was a good class.”

As part of Friday night’s presentations, third-place finisher Torano’s mount Laskano, owned by Isalou Inc., was awarded Shapley’s Best Turned Out Groom’s Award. Elise Iafrate’s Nabisco was honored with The Far West Farms Perpetual Trophy as the horse with the highest cumulative point total in the four rounds of the WCHR Professional Final.

Jaden Olson, 21, of Parker, Colorado, demonstrated her consistency and her nerves of steel as she posted top scores in both rounds of the Ariat National Adult Medal Finals, and held the lead to take home the blue.

“My plan going into the first round was just to execute a smooth, flowing course. There were a lot of related lines, so I had to be accurate,” said Olson, admitting she felt the pressure going back in on top for the second round.

“There was a high score right before I went in, so I had to lay it all out there,” said Olson, who went on to explain her strategy. “I went straight to the first jump, and I did a tight inside turn back to the second to last fence. I executed to both of my plans how I wanted them to go. I just tried to keep my nerves in check as much as possible because it is a pressure-filled situation.”

Olson knew she wanted to execute the hardest plan she could but do it “well and smooth.” She added, “That was the hardest thing, just thinking how to stay calm and still execute under the pressure.”  Olson posted a first-round score of 89 and solidified her win with a second-round score of 91.3.

Olson rode Conradical, a 13-year-old Holsteiner gelding that she purchased when it was only five years old. “I’ve had him for a very long time, and we have built a very good partnership,” said Olson, who admits he was wasn’t always easy. “When I first got him, he was a little bit of a troublemaker in the barn and while riding him. Now he is quite perfect, and he’s actually for sale, which I’m sad about, but I am moving to London after I graduate this spring.”

Olson admitted it is time to move on, and Capital Challenge was their “last hurrah.”

The young adult trains with Mary Ann Thomas at Ashwood Farm as well as at Four Seasons Farms in Georgia. This was her first time competing in the Ariat Finals but thanks to the unique situation of the past 18 months, she was able to make it a goal.

“I had more flexibility in my schedule because of COVID-19 so I was able to qualify, and I just thought I might as well do it,” said Olson. “I had the horse to do it on, and he was awesome.”